Why The Elephant House is pants

Harry Potter’s birthplace is not all it’s cracked up to be, says Lara Prior-Palmer

‘Birthplace of Harry Potter’ it may be, The Elephant House ought also to fulfil its primary function as a café. From this role it has strayed frighteningly far. ‘Tis more an aspiring museum than an eating-house these days. 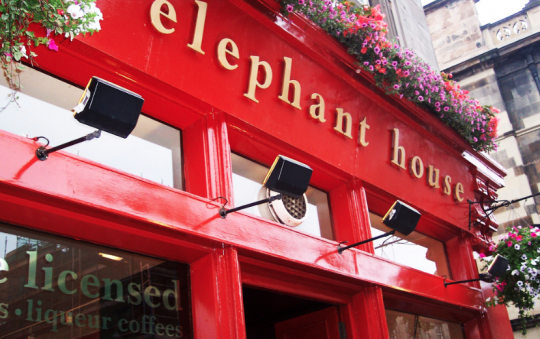 The elephant house… what a weird name….

Customers swan in past giant signs boasting Harry Potter heritage. You are greeted inside by trails of heavy rope hanging from golden posts. The sort of stuff found protecting 18th century furniture in Napoleon’s bedchambers. Postcards of impressionistic paintings of The Elephant House’s Potterised interior and exterior linger on sale. And these are no mere postcards. They are giant postcards, almost A4, offered for sale to lowly customers at £1.79 a piece; my, the privilege! Amongst all this ostentation, what The Elephant House should know is that J.K. Rowling’s excellent brain, and not the radiance of their bottom-slaughtering wooden chairs, was the true ‘birthplace’ of Harry Potter.

Waiting in line, cowering in the majesty of magnificent ropes and pompous postcards, lunch can be chosen from the blackboards. Baked potato, or soup of the day? Back and forth the pendulum of the mind swings until a final decision. Yet, after seven minutes of queuing, it’s ‘No, no potatoes left.’ Oh, humph. ‘Salmon paninay?’ Nope, they’ve got none of those either, and there’s no apology for the befuddlement this is causing the Potatoe-conviction the mind previously possessed. Why of course, ‘sorry’ shouldn’t be expected, – are you mad? This is the birthplace of Harry Potter, not some kind of RESTAURANT! 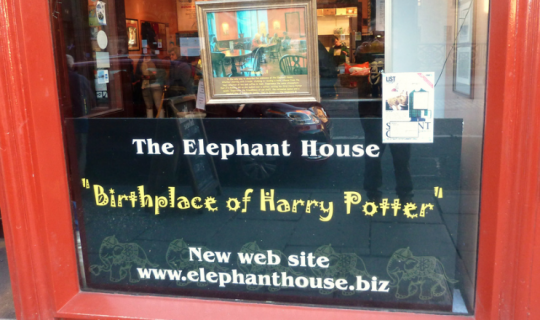 When I (yes, it’s me) head to the back of the cafe with the diminished version of my mind’s lunch, a hot chocolate, I am confronted by a European accent that orders me to sit on a table with a man, a stranger. But I do not want to sit with a man? Might I sit on that empty table over there, please. ‘I’m afraid that table is reserved for bigger groups.’ Oh yes of course, those big groups that take the museum tour, I know the ones.

Sitting awkwardly opposite this man, my brain drowns amongst the shrieks that fill this tourist zoo. A Chinese group drenches the room in the flashes of their cameras, as four German girls squeal in holiday delight over grouchy coffee. This is no literary inspiration; this is a tourist trap depending on a tenuous Harry Potter connection for its custom. I throw my hot chocolate over a strutting waitress, in my imagination, and leave.