The Mercury Award nominees are lying in wait for the 1st November ceremony. The winner will be shot to stardom, Radio 1 playlists and perennial-drink-buying status with a cool £20,000 prize. Previous winners are Arctic Monkeys, Elbow and The XX. Whose album will be crowned king this year? 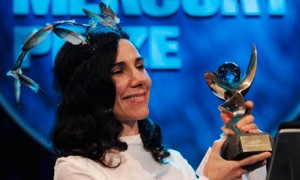 The Tab takes a look at the acts and we’ve checked out who’s touring, so if you like what you see, you can go see!

Sheffield’s Hawley’s seventh album is harder and growlier than his previous ventures. Crooning about “love and all that”, this guitar-based ether is a favourite to win.

His famous baritone is tarnished by a long line of electronic pedals and surrounded by sprawling riffs. Is the connection lost with the listener? Not here. The pastoral psychedelic wisdom in the lyrics offers the ideals of simplicity wrapped in the wires of urban life.

The most “current” album on the list. Lyrics include looting the streets of London and hugging hoodies.

Plan-B returns to rap after the soulful falsetto of Strickland Banks. The album accompanies a film about the harsh realities of East-End life and sets him apart from the mostly indie shortlist. Is it sensational or sensationalist? The Tab hasn’t yet decided. All we know it that Plan-B is popular.

This is an album that has the ability to both intrigue and dissatisfy. The songs are unequivocally catchy but one can’t help to think that there is more to come.

Their mix of upbeat dance music and playful pop are an easy listen. This is non-offensive party music you could bang on an iPod dock to liven a dreary pre-drink.

Will they light up the world? Probably one dirty pint at a time.

This is the band’s 4th album and is a joy to listen to. In the Tab’s opinion, a good album is one that could accompany and inform a movie. While Plan-B’s actually has, Plumb would be a Channel 4 dark comedy.

Discordant verses and resolving choruses with moving drum beats set up for a brilliant first listen. A fine wine ages wonderfully. This may age like milk.

Jack Johnson, Bob Dylan and Cornwall’s dark surfing waves are the inspiration for this debut album. Hum-along melodies and counterpoint fingerpicking take the listener to an armchair with rain tapping against a windowpane.

Howard has a great future, however, The Tab is sure that we have probably heard this album somewhere before.

Kiwanuka’s debut album was released after becoming BBC’s Sound of 2012 in January. Soaring strings, winding bass lines and an Otis Redding voice continue the revival of retro soul in the UK.

An album you could walk down Queen Street to on a sunny afternoon. It might even get you through the queue in Primark before you self-harm.

After being a backing singer for Paloma Faith, the bubbly neo-soul singer has released a chill-out album that is both sexy and filled with longing.

Is this record Big Enough for the prize? Not really. This seems to be a saturated genre with Emilie Sandé (a surprise oversight) as the leading light.

Supposedly, her bongo player is good looking, which is something.

Sam Lee – Ground of its Own

The album is a collection of 8 folk songs drawn from the British Isles, mixed with some buzzing instrumentation in an unyielding flux.

Modality and originality meet to bring Ye Olde Songs to life. Sam could be a dark horse for the Mercury Award. Even if he does not win it, the exposure should do him well.

The Maccabees – Given to the Wild

The Maccabees describe their third album as “cinematic”.

Deep bass but floating vocals. This album is a dreamy mix that would sit happily in a playlist next to The XX and Kate Bush.

Pop and soul come together with effortless sophistication. You know the content is good when you never want it to finish.

A surprise inclusion that will be delighted with the call up. They have been lighting up the Leeds music scene and have been described as the future of UK Jazz.

It isn’t Ron Burgundy with a flute. This has a feisty furiousness that would tear his moustache clean off.