Tributes for the legendary TV and radio host have poured in

Sir Terry Wogan has died this morning, aged 77, following a “short but brave” battle with cancer, his family have said.

Wogan began his career in his native Ireland where he worked for a host of radio and TV stations as a DJ and presenter before moving to Britain.

He became an icon during a lengthy career with the BBC. He first on the Light Programme in September 1966 before going on to make a name for himself working on The Breakfast Show on Radio 2. From there he moved into TV broadcasting hosting shows – including Children and Need and the Eurovision song contest. 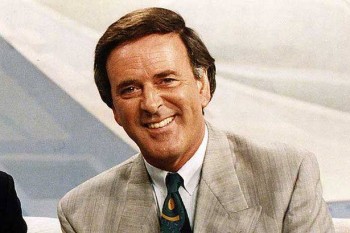 Eurovision was a highlight: his cynicism for the format and its contestants endeared him to the British public, where he once referred to the show as “an outstanding, grandiose load of rubbish.”

But to our generation, he is likely best known for his lead role in presenting Children in Need. He hosted the show from its inception in 1980 all the way through to 2014. He missed last year’s show due to illness. During a 34-year tenure as presenter, Wogan compelled viewers to donate over £790m for children and young adults.

His death is a shock: Wogan and his family kept the battle with cancer private. In a statement to the media, his family have asked for privacy.

Wogan is the latest much-loved, high-profile celebrity who has died from the disease in the past few weeks following the passing of David Bowie, Alan Rickman and Ian ‘Lemmy’ Kilmister.

Fans and celebrities are paying tribute on social media.

BBC Daily Politics presenter Andrew Neil said: “So sad to learn of the death of Terry Wogan, after short battle with cancer. I was always a delight to be in his company. Wonderful man.”

And Graham Norton, who took over from Wogan as presenter of the Eurovision song contest following Wogan stepping down, said: “He made it seem effortless and for a young boy in Ireland he made it seem possible. RIP Sir Terry Wogan.”