Nerves of steel: Meet the UVA fourth-year cheerleading against the odds

Last year she tore a muscle in her shoulder

Tory Steining never thought she would hear those words uttered from her orthopedist back in February of 2015. “Surgery,” he said. “It’s really the only way you can fix any of this with a tear of this magnitude.”

“Okay,” was all Tory could muster. At the time, she was a third year co-captain for the all women’s cheer squad at the University of Virginia. After her appointment, Tory texted her parents the news, too afraid to talk on the phone and let them hear her tears, halfway across the country. In late February, an MRI revealed a torn labrum and bicep tendons without being able to pinpoint an exact date of injury. 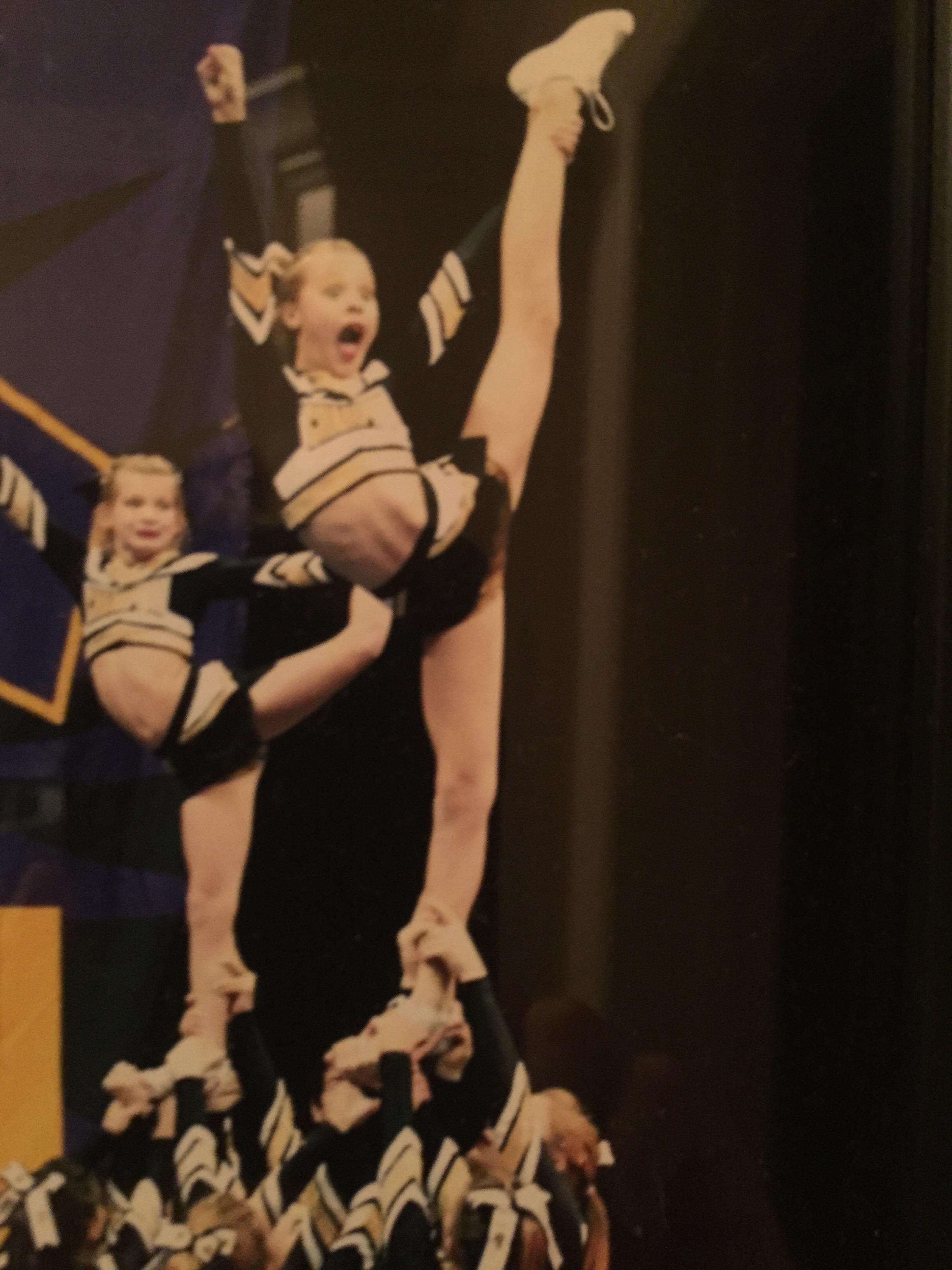 When Tory was just five years old, she and her older sister, Maggie, were invited to watch two of their friends who were also sisters in their cheer routine. After seeing the uniforms and feeling the energy of the atmosphere, Tory knew she wanted to be a cheerleader. She signed up for the team the next day. The team had coordinating uniforms consisting of gold and white shimmering long sleeve tops with black and white pleated skirts, finished off with crisp white high top Reebok sneakers. “They were pretty ugly looking back on it now,” Tory said. “Probably just old fashioned… I don’t know why I thought they were so cool, but I did.”

Two years later, in second grade, Tory had her competition on the Level 1 team called “The Hotties” at the Southern Methodist University stadium in her hometown of Dallas, Texas.The routine with her sister Maggie and other teammates was two and half minutes long. Her mother, Michele, remembers watching the girls nail the routine in its entirety. “Quiet little Tory was a beast once she walked out on the mat—nerves of steel and a dazzling smile,” Michellesays.

Tory performed on the team as a base of a pyramid from age five to nine, then moved to a
flyer (topping the pyramid) from age nine to 14, and transitioned to her current position as a back spot, which is said to be the strongest building block of the pyramid. Back spotters provide stability to the flyers, call out the stunts, and make sure the flyer returns safely to the ground all the while being prepared for any mistakes that could lead to injury. Even though they are rarely
seen while standing in the back of the formation, they are essential to the safety and overall performance of the stunt. Tumbling was always her favorite of all the stunts; showing off for friends at parties helped her feel different from everyone else. Her talent for cheer isn’t the only thing to set her apart from her peers though. Tory’s strength and dedication soon proved to be her defining characteristics.

Michele and Joe Steining were both active athletes during college: Michele played basketball in Pennsylvania while Joe dabbled in basketball and baseball on the recreational leagues at Bowling Green State in Ohio. After moving to Fairfax,Virginia Tory was born in August of 1995. A year later, the Steining family moved to Dallas, Texas. Dallas’s lifestyle, which often centered around football, reinforced the family’s sports ties, only furthering Tory’s appreciation of a team mentality and dedication to her own cheer squad.

“She was strong willed and then some,” Michele says of Tory’s stubborn loyalty. Tory first challenged her body when she broke her finger. The orthopedist recommended that she stop cheering until it was completely healed. Tory had other plans. “I’ve been tumbling for a week with it broken and the NCA Nationals are in two weeks. I haven’t worked nine months to sit this one out. So I am tumbling,” Tory said. She tumbled in the competition and helped her team win the highest marks.

A few years later, she heard a pop in her pelvis during a competition, she finished the routine, all the while hitting every stunt perfectly, again helping her team win their Level 4

Senior competition. Tory ignored the pain and cheered through the next two months with the aspiration to make it to the NCA Nationals, but her parents eventually dragged her. Without realizing it, Tory had snapped the muscle off of the bone at the growth plate in her hip. As her hip was healing and the muscle started to grow back, she rebroke the bone during the last
competition and was forced to sit out for six weeks.

Eager to continue her passion, Tory tried out for the Nolan Catholic High School cheer squad the day after the doctor cleared her for physical activity without having tumbled for two months. Hitting every stunt with perfection as usual, Tory made the team without a problem. 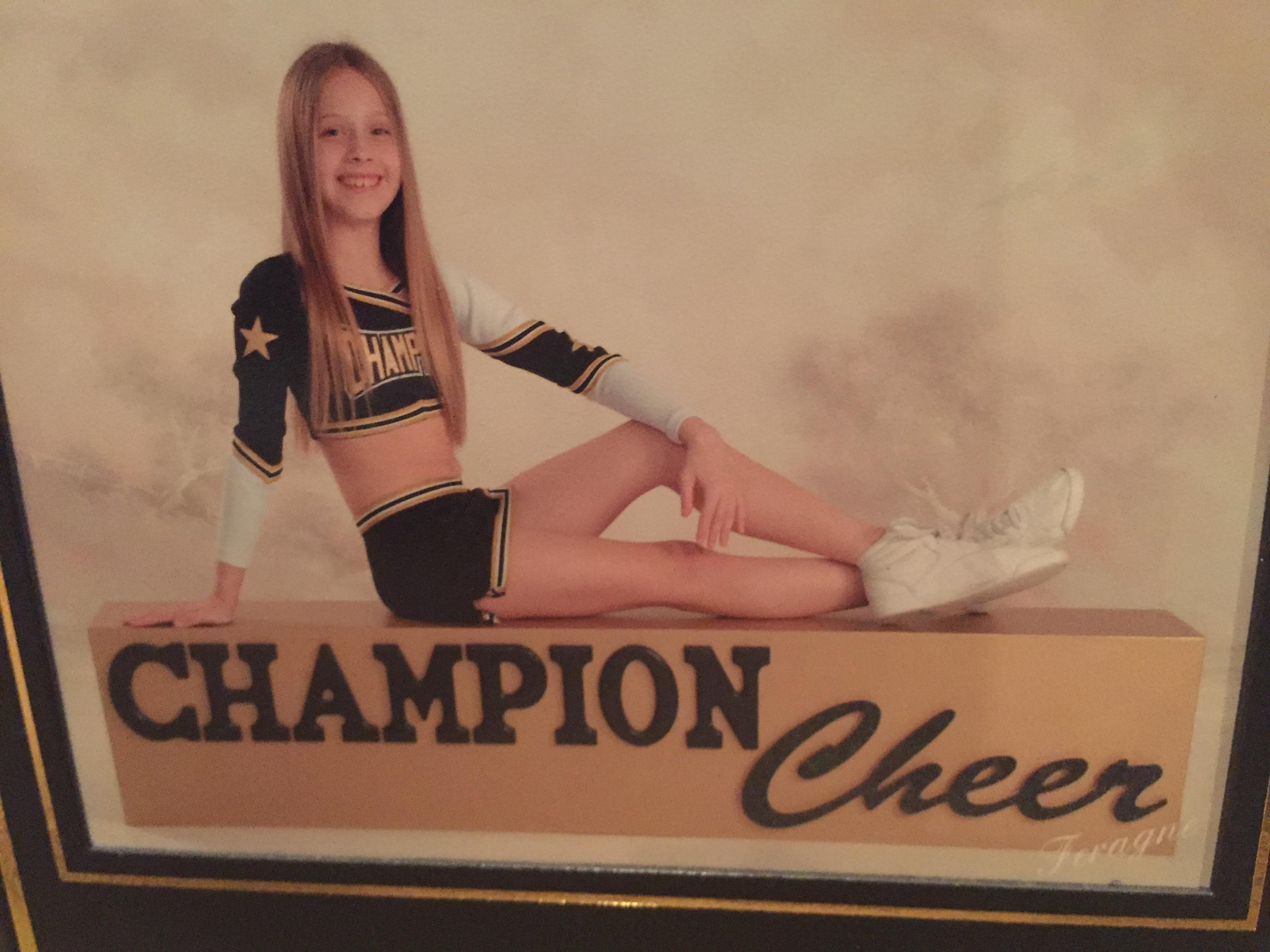 “In high school, I loved watching the pep rally routines—seeing her tumble on the hardwood without a spring floor, Tory still got amazing height in her layouts,” Michele says. “Tory was on the competition dance team too so during the dance section of routines she was always front and center.”

If it weren’t for their short time in Virginia, Tory’s parents would have never convinced her to apply to the University of Virginia. Tory had her heart set on going to Wake Forest University, even if she didn’t make the cheer team. But upon Tory’s acceptance into the Engineering program at UVA, she travelled to the University for the first time and toured the grounds. When Tory got news of her making the women’s cheer team, she accepted her offer to the University.

Cheer continues to dominate Tory’s time and attention. Mondays are one hour of conditioning, Tuesdays and Thursdays are two and a half hour practices, Wednesdays and Fridays re weight and cardio interval training, and Sundays are one hour all strength training sessions. But fall Saturdays are her favorite: football game days. Staying true to her Texan roots, Tory has always favored cheering for football and getting the crowd engaged in the game. Just as the men on the field each have a vital role for the team, she believes that cheer is no different: “Every person has a different job, but everyone plays an equally important role,” Tory says.

Nothing could take her from her role as co-captain and teammate, not even an invasive shoulder surgery and year-long recovery.

October of 2015, sophomore year, brought Tory pain and confusion. She knew that something wasn’t right. Her arm felt weaker and normal movements seemed bothersome, but she continued to cheer anyway. At its worst, Tory’s pain felt like a stabbing in her shoulder socket. 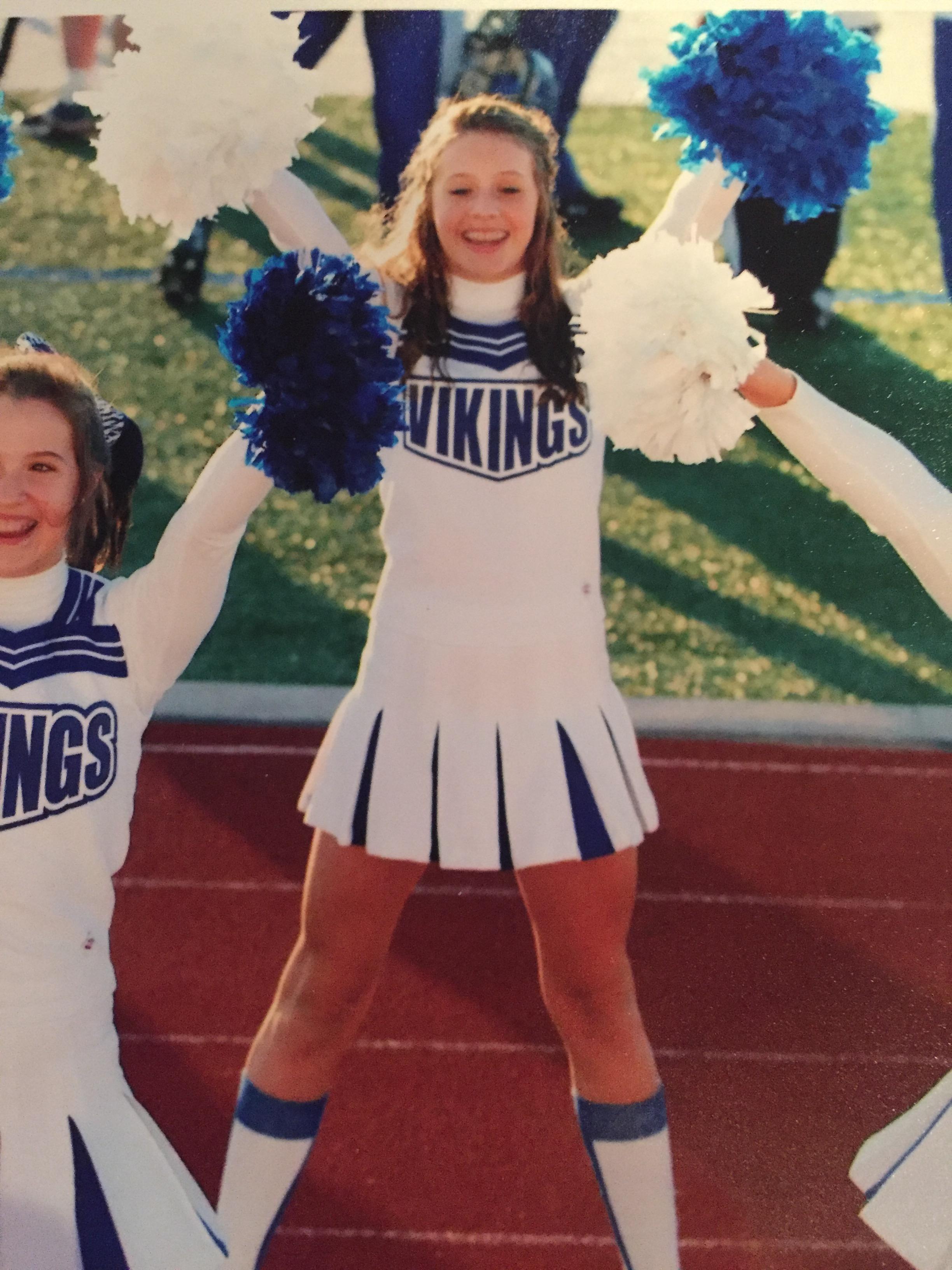 Moving and pushing her arm past a certain limit made her feel as it her arm was getting ripped off. Finally, after three months of smiling and stunting through the pain, Tory went to a UVA sports trainer for evaluation. The staff suggested staying conservative and trying physicaltherapy. But with no relief, she got an MRI in February that revealed the tear. She heard the constant suggestions to stop cheering to prevent long-term effects, but all she could think about was getting back on that field. “I never even considered giving up cheer,” Tory said. “It was always such a big part of who I was, who I am.”

Waiting until the football and basketball seasons were over, Tory went into surgery for her shoulder on St. Patrick’s Day of 2015. Her mom flew into the Charlottesville airport two days prior and stayed for just over two weeks to help Tory throughout her recovery. Michele remembered when Tory woke up and asked about how the basketball team was doing. “She always wanted to know if she was winning the March Madness pool!” Nothing seemed to keep Tory from always thinking about her sports life. The next six weeks while in a sling for her shoulder proved to be the biggest challenge for her to overcome. Normally thriving on being independent, Tory said, “I felt like a three year old. I’ve always hated asking for help.” Daily routines she had taken for granted such as getting dressed, taking a shower, or even holding a textbook became painful tasks she couldn’t tackle without help from her mom or her roommate and teammate, Anna.

The pain medication made her nauseous, keeping her from eating anything except chicken noodle soup, as long her mom had fished out all the carrots of course. While she was thankful for her friends offering to visit her and shower her with get-well- soon gifts, she often refused to see them, embarrassed by her feeling helpless. True to her passion, Tory embraced physical therapy three times a week wearing sling to prevent her wrist and arm muscles from freezing, hoping that eventually, she would be back to normal and cheering with virtually no problems.

Once the shoulder sling was removed, Tory continued with more strenuous physical therapy and strengthening exercises throughout her summer vacation at home in Dallas. The orthopedist refused to clear her for training camp, and still has not officially cleared her physically to cheer at full capacity. But Tory didn’t let that stop her. “Tumbling is hard because I can’t fully bend my arm backward like I used to. I never had to think about tumbling before…” she said quietly. “I wish I hadn’t gotten the surgery.” She would rather have cheered through the severe pain of a tear than to have the limitations that surgery and the healing process has given her. 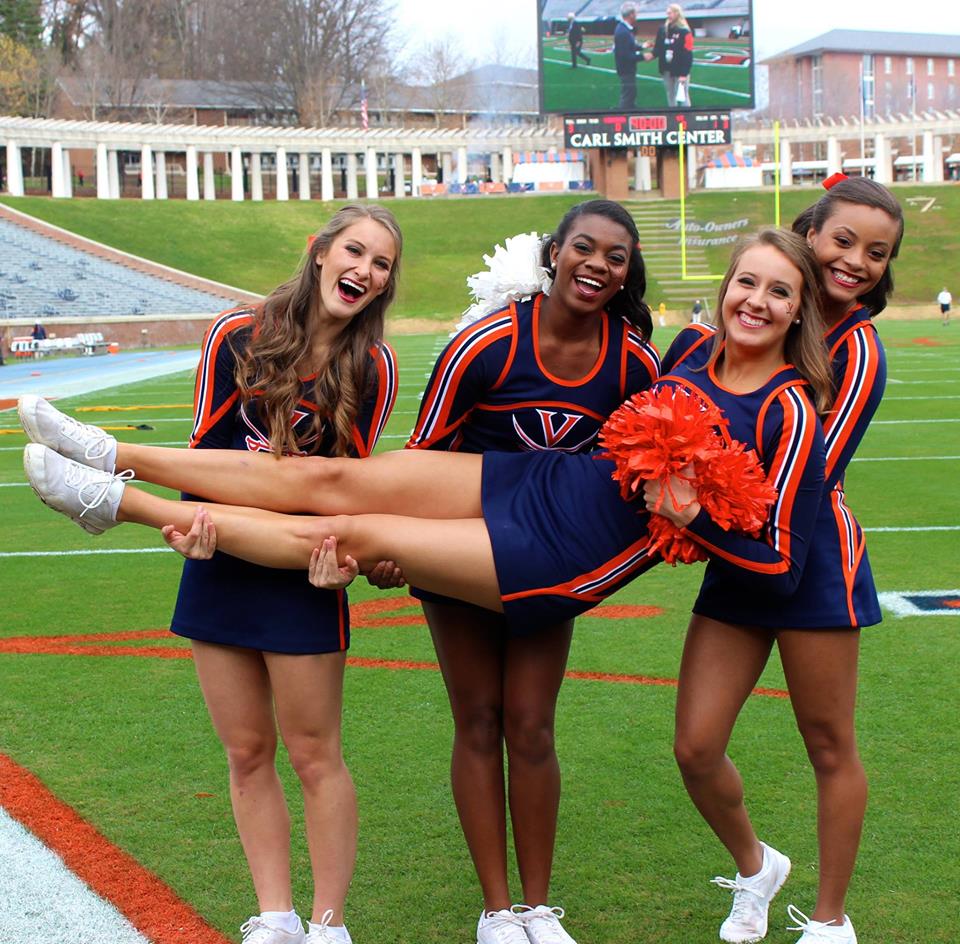 With the football season halfway over, Tory is well into her final year of college cheering, with her last home football game quickly approaching. “Maybe it’s just because it’s been a part of my life for so long – I have so little time left that I don’t want to have to give up such a big part of me that I’ve been doing for over 80 percent of my life,” Tory says. “And I’m going to have to let it go eventually, so I want it to be on my terms, not my shoulder’s terms.”

Back spotting her teammates causes her pain during every game, but she refuses to let her team down. “On top of that, there are like twenty people on our team and if one person is not there then that means everyone can’t do certain stunts. Pyramids can’t happen the same way, my stunt group wouldn’t be able to do stuff. So I would never put my team in that position to be at a disadvantage. It’s more important for me to be there for my team than to deal with the pain myself and make my team suffer.”

Tory knows her cheer career is coming to an end as this football season coming to a close. Throughout her life, Tory has never considered giving up on this part of her being: her team-centered mindset, her passion and drive for stunting, and her love for the game. No one, not even her own body, could tell her to stop. Tory’s nerves of steel withstood 18 years of competitive cheer and will most likely continue to battle shoulder pain. But she looks back on those times with the dazzling smile her mom and teammates know best.