Who is Amanda Rome West? A dinner with the USC social media enigma

She goes by many names: Amanda, Amanda Rome West, ARW, ARDubbz, Queen of the Village, LA based icon, and Ruler of West's World (which you're all living in, btw). She has many talents: yoga, creating content, and capturing the perfect angles in her gym selfies. She has thousands of Instagram followers: 15.9k, to be exact – and don't forget the ".9" because she will correct you.

Others have dubbed her the "Kim Kardashian West of USC," which is weirdly fitting, considering her last name is coincidentally, West. Her Twitter handle is even @WEST_notkanye, just in case you needed the extra clarification that she isn't in fact, Kanye. She's Kim.

outshining all them basic betches on the daily ✨

But who is ARW beyond her daily meal prep snaps and her body-centric Instagram posts? The Tab USC editor, Kate Lonczak, and writer, Andrea Capone, sat down with Amanda over dinner to find out.

The first thing we learned about ARW: she doesn't come easy. A few time and date changes later because of her busy schedule, we solidified an arrangement that included picking Amanda up from a networking event. Unsurprisingly, she's pursuing a career in the entertainment industry.

Red Roses®️ ? @lilskies feel free to drop a line in the DM this v day ☁️

The drive to El Cholo felt like an episode of Carpool Karaoke. Amanda told us her backstory – a Washington D.C. native who moved to LA to be a business cinematic arts major at USC – and then she rapped. Yes, she is coming out with a rap mixtape and tbh, I think she has the potential to be the next Cardi B.

Over nachos, Amanda chronicled her journey to social media fame. Most USC students know her as the girl who lost her GoPro one game day, which was meme-ified on the USC Meme Page. But besides that catastrophic event, Amanda's large following started on her snapchat, @amanda_please6. 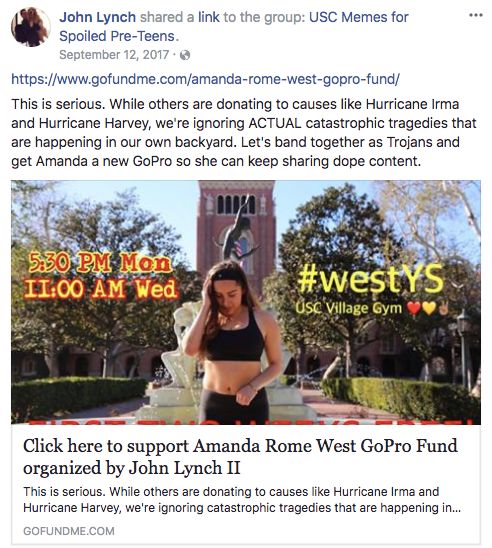 "I never wanted to be an influencer. I basically just do me and then people follow it," Amanda said. "You do a lot of stuff that results in a lot of clout and you only get followers if you have clout."

For those unfamiliar with the term, "clout" means being famous and having influence, as per Urban Dictionary. You're welcome.

Amanda got her clout from vlogging daily, giving #WestTips about life, and teaching #WestYS, a yoga sculpt class at the Village gym. To our unfortunate surprise, when the Tab USC showed up to take a West yoga sculpt class, it no longer existed. Amanda had to stop teaching at the gym because of her limited free time.

| | | sweat is sexy | | | what are your new year’s resolutions? mine are to continue to eat clean, workout/stay active every day, be positive, extend kindness to the world, and contribute to a more creative & happy world. don’t forget to come to #westYS, my signature yoga sculpt with weights class, every thursday at 7:30 pm at the USC village gym ? . start the new year off in STYLE. outfit from @carbon38 @terez @goodhyouman – get my carbon38.com fitness vibes for 25% off with code AMANDAWEST25 at checkout ? what’s the point of working out if you don’t look and feel good inside AND out? . . . thank you @mobyrivers for this perfect zuma shoot, let’s continue to NAMASLAY together in 2018! ? COMMENT YOUR RESOLUTION BELOW ?

In addition to teaching yoga, Amanda said she works out for three hours every day. Her routine is a variation of arm day, leg day, cardio, HIIT, SoulCycle, and yoga sculpt at Corepower. She describes her body as "slim thicc" – with two c's, of course.

Other fun facts we learned about ARW? She parties with 2 Chainz, she's met Paris Hilton, and Virgil Abloh told her he "knows her Instagram." She's had "relations" with Mark Wahlberg's stunt double, and her fitness inspo is her personal trainer, Sophia. Oh, and she now has an ARW merchandise line.

ARW FEBRUARY LIMITED EDITION HAND-GLITTERED/METALLICIZED “WEST’S WORLD//YOU’RE JUST LIVING IN IT” HOODIE OUT NOW ??‍♀️?? Amanda Rome West Merch selling out quick MY PICK OF THE DAY BE DIS H00DIII ? tag your friends who need this ? LINK TO PURCHASE IN BIO: http://www.gtdgraphics.com/amandaromewest.html

“The ‘I feel like ARW’ T-shirt just sold out, but I’m putting it back in stock soon," Amanda said. "Another one of my favorites is the ‘West’s World’ hoodie, and of course, the 'iconic' hat because, ARWesties."

But besides being a household name at USC for her social media "clout," who is Amanda Rome West?

Her answer to the million dollar question: "I’m a producer, a content creator, and an influencer who is interested in all aspects of the entertainment industry. I just seek to give people great things to watch."

There you have it. Just remember, "It’s West’s World, you’re just living in it."