I went to the opening of Harry Potter world in Hollywood

‘No longer do you need an imagination; all you need is to come and experience, to be part of it’

On April 5, muggles and wizards alike congregated at Universal Studios to celebrate the long-awaited opening of Hollywood’s Wizarding World of Harry Potter.

To commemorate the opening night of another Harry Potter World – two others already exist in Florida and Japan – some of the original cast members of the Harry Potter franchise came out to visit a mystical world they spent years filming in, including Tom Felton, Evanna Lynch, Warwick Davis and James and Oliver Phelps. 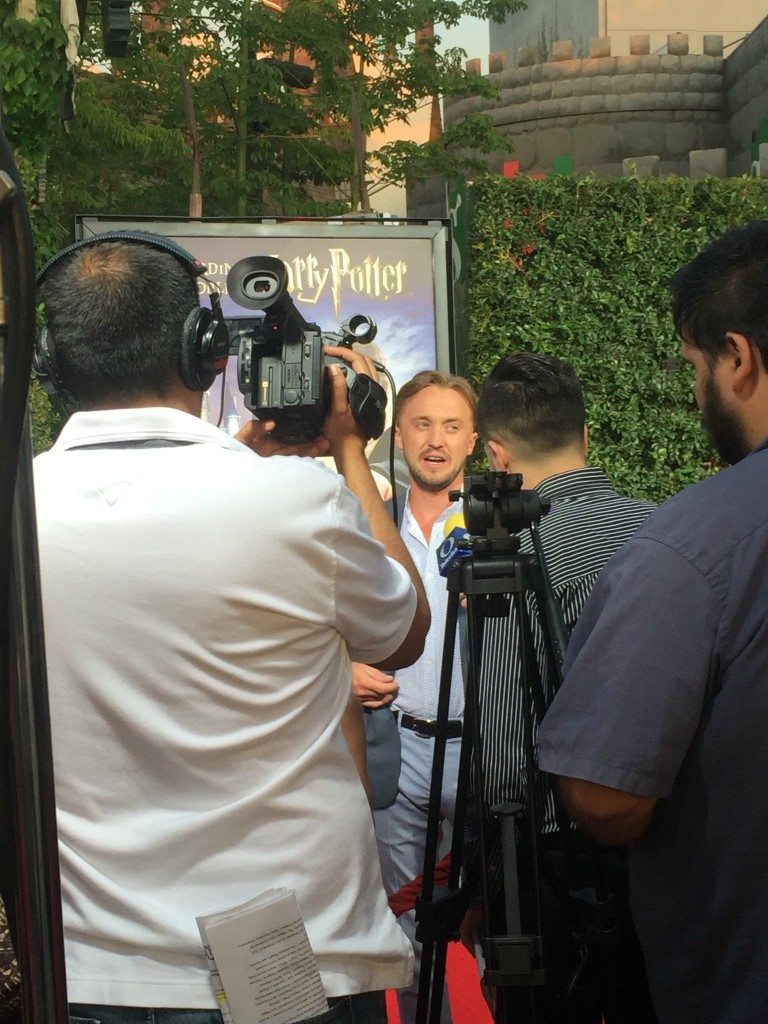 Tom Felton at the opening night of the Wizarding World of Harry Potter in Hollywood, CA on April 7

Like the books themselves, the opening night was truly magical as Universal brought out all the stops. And yes, we mean all of them: as a fireworks display lit up Hogwarts castle, composer John Williams conducted the Los Angeles Philharmonic through the film’s scores, the first three of which he wrote.

Even without the original cast members and John Williams, opening night at the Wizarding World of Harry Potter feels like a true, if not long overdue, trip to Hogsmeade. Outside of Ollivanders, the famous wand shop, cast members are on hand to teach you how to cast a spell to make a quill stop moving; dare you say the name Voldemort on the premises, any wizard who hears you will shush you immediately. 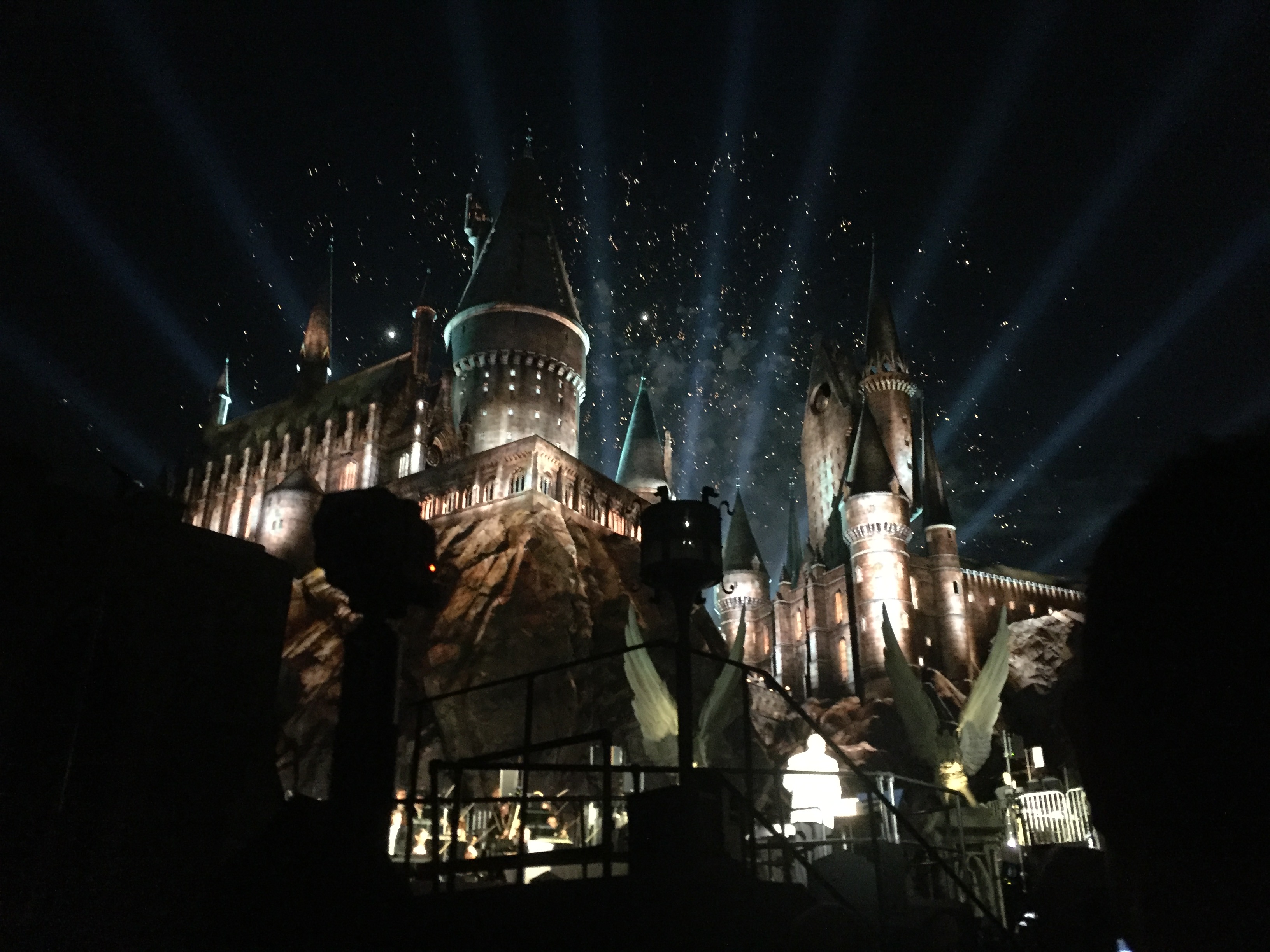 Perhaps what was most true to the franchise, though, is the park’s main attraction, the Hogwarts castle, which houses one of the two rides at the park, Harry Potter and the Forbidden Journey. The walk up to the 3-D ride is almost as enjoyable as the ride itself as you find yourself walking past moving portraits, Dumbledore’s office and a Hogwarts classroom where simulations of Ron, Harry and Hermione are talking to each other. Even the sorting hat makes an appearance at the end of the line to warn you to keep your hands inside the ride at all times.

Speaking about the park, Tom Williams, CEO of Universal Parks & Resorts, noted that the addition of a Harry Potter World in Hollywood will put many readers’ speculations of what Hogwarts could be to rest.

He said: “As we first read those books, we used our imagination to conjure up what it was all about, what it would be like to be there.”

“No longer do you need an imagination; all you need is to come and experience, to be part of it.”

Mayor Eric Garcetti, a self-declared Gryffindor, also noted that there is no better place to house such a magical world than Los Angeles, which is “ground zero for contemporary art”. 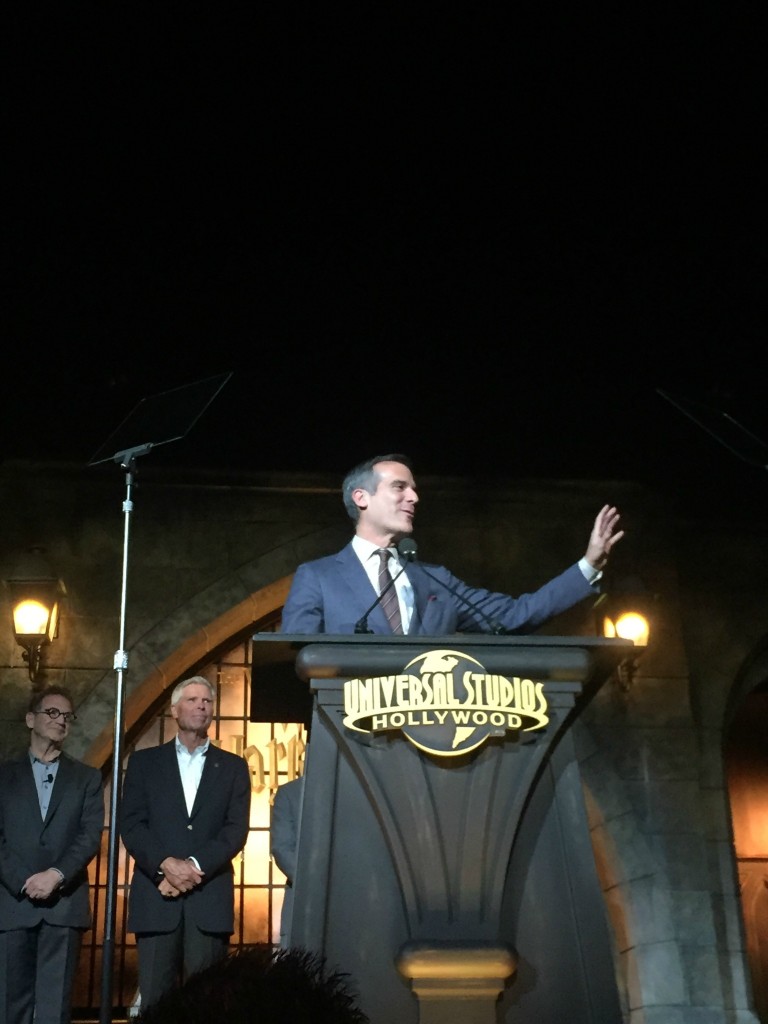 Mayor Eric Garcetti at the Wizarding World of Harry Potter on April 5 in Hollywood, CA

“L.A. is the place where powerful, iconic stories are born, where hopes and dreams are made real,” said Garcetti. “In L.A. you can apparate or slip between the columns, slip between different platforms – Platform 9 ¾ perhaps – to a completely different world.”

Past the entrance to Hogsmeade lies two rides and several shops straight out of the books, including Ollivanders and Honeydukes, the legendary sweets shop where one can purchase everything from chocolate frogs to butterbeer fudge. If our letters to Hogwarts never come (and I’m still hoping they do), the Wizarding World of Harry Potter at Universal Hollywood may be the second best thing.

Though the park had a soft opening in February, the gates to Hogsmeade officially open for good today, April 7, and you can buy tickets for the park here (though tickets for today are sold out).