‘We have to be vocal, loud and preach love’

Chants of “No KKK. No Fascist in the USA. No Trump!” pierced the eerie silence that consumed the University of Miami following the election of Donald Trump into presidency. The silence was overwhelming. It was as if students were afraid to acknowledge the reality that presented itself. A reality in which minorities have essentially become targets for discrimination as a result of a bigoted platform that supports hatred and prejudice against anyone but the white man.

Students took the initiative to voice their frustrations by organizing a peaceful protest in a span of two days.

Adversary is inevitable, and in this case, some of our school’s very own Trump Supporters decided they would enlighten the public as to how insignificant protests are. Admittedly, yes, protests cannot alter the outcome of the election, but they do serve an essential role in generating a sense of solidarity among the 56 million constituents around the United States that did not vote for Donald Trump. In other words, those that were “with her,” can be ensured that they are not alone in what has become the most morally divisive altercation of the year. 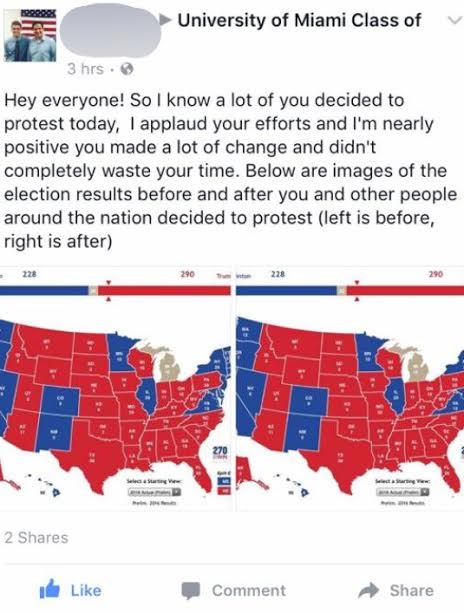 After trekking the entirety of their campus, student protesters gave impromptu speeches on the steps of the Rock Plaza. One of which stood out particularly for uplifting not only Muslims, but also queers, hispanics and blacks that have been feeling the dagger wounds of Donald Trump’s sharp words. Prior to her discourse shown below, UM junior and Egyptian American Rowanne Ali told The Tab she “refuses to feel fear.”

To the queers, hispanics, blacks who feel their safety is being threatened, heed these words by @AliRowanne who is unapologetically Muslim. pic.twitter.com/NU5DZDxPDs

With frequent discussion regarding Muslim women and the removal of their hijabs in public for the sake of safety, Ali feels as though she must wear her head piece, now more than ever. She admits, “I refuse to feel like I have to take my hijab off to please you, to blend in, to walk in the streets with this fear that people are going to hurt me just because I wear the hijab and look the way I do.”

“I am just as inspired by the election as much as it’s been disappointing. I think it inspired me and a lot of youth to just make sure they work harder.” Her belief that Muslim women should not fear repercussions, but rather wear the hijab as a sign of insurgence, is a testament to the spark being ignited in minority groups who refuse to be silenced under the hand of an oppressive agenda.

I was just told by my white #trump loving bosses, to remove my #hijab, because they don't want a #muslim representing their business.

Some muslim women will have to take off their hijab just to feel safe and y'all think this is okay?

Sentiments of unity and camaraderie continued throughout the afternoon as peers took the stage to articulate their fears and hopes for the future. Every student spoke of his or her own heritage or background, which attests to the diverse atmosphere found at the University of Miami. This student felt the need to speak on behalf of two groups he is a part of: the Jewish and the LGBTQ+ communities.

“I am out here today because I think it is imperative as young people, that no matter what our background is, that we are making our voices heard and standing up for justice and equality. When this news first came out, for me I just felt really defeated and I wanted to be complacent and sit back and not think about it. But I think now we have to turn that around and we have to be vocal and be loud and preach love.” 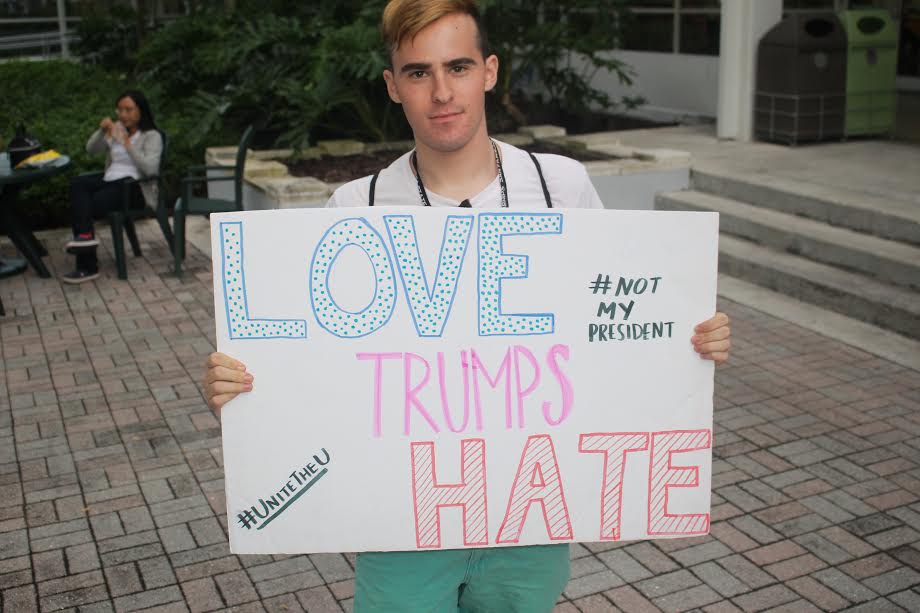 And of course, we cannot have representation of the Jewish, queer and Muslim communities without a little hearsay from the black community. However, senior Nikhil Delahaye refrains from particularly speaking in virtue of his black kin, but rather all people. His subtle but eminent messiah complex gears around his desire to ensure that equity and justice prevail in the face of darkness.

“I’m a man who wants nothing more than to fight for the rights of every single person, every possible individual who can bring some sort of light into this country. Because this country in itself is our home and this country in itself represents the dream and ideal to do greater and be greater. Not in spite of others, but with others, using ourselves in tandem to be able to go on as humanity to the next level.” 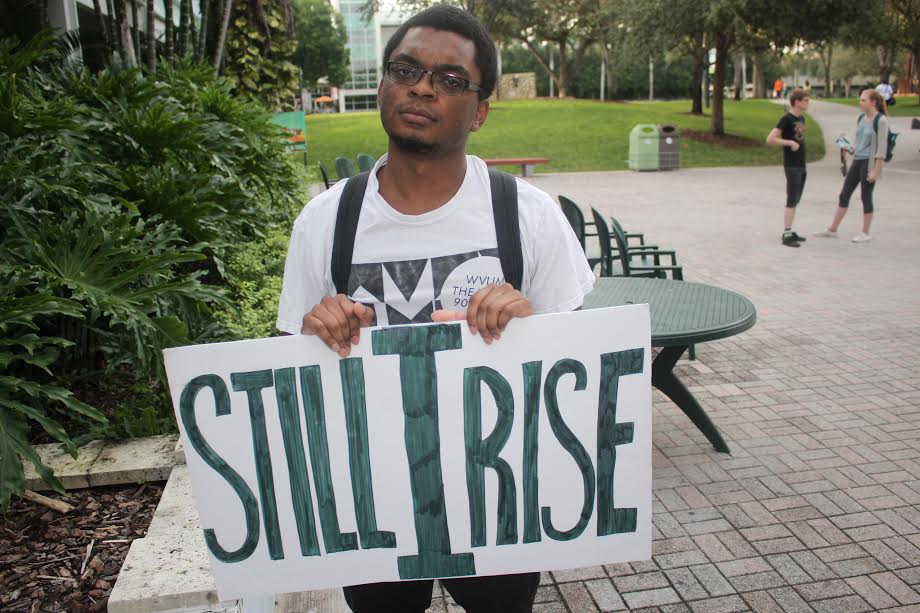 Spoken word poetry was performed but unfortunately interrupted by Trump supporters as seen in the commencement of the video. However, cries of affirmation stole attention away from these insensitive perpetrators as students yelled, “Ignorance ya’ll. That’s why we’re out here.” This act of inconsideration was brushed off and the students continued only to be met by students wearing “Make America Great Again” caps much later. 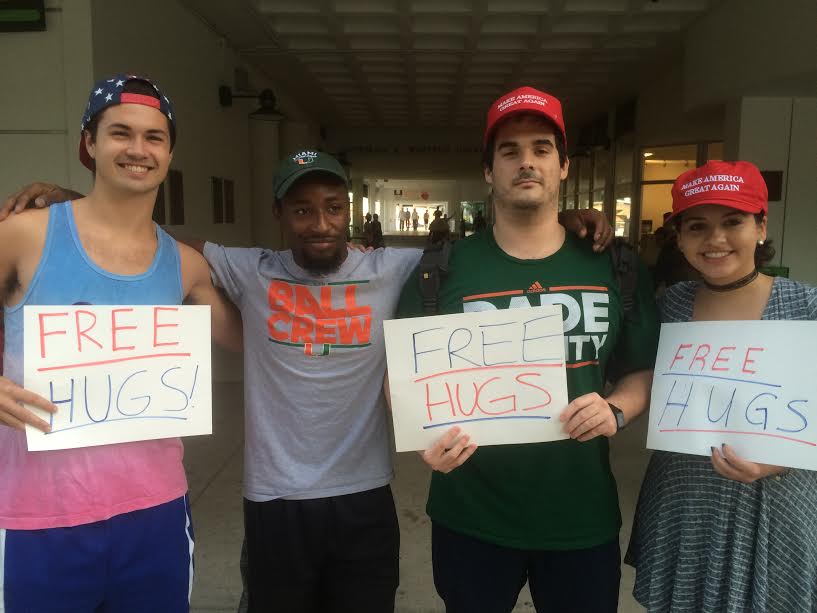 These Pro-Trump students attempted to reconcile with the peaceful student protesters but were met with contempt. Although their intent was to bring peace and show their understanding towards the frustration of these student protesters as they explained to The Tab, the situation took an unexpected sharp turn. In fact, instead of mending the divisiveness that has formed between these two groups: pro-Trump and Anti-Trump, all it did was incite distress because the act itself seemed more like a sign of mockery, than one of harmony.

The Tab asked these MAGA advocates if they knew why people were upset and the response was, “Honestly, I’m not sure but we’re here to show we’re not gonna attack anybody.”

When these Trump fanatics claimed, “We’re part of this campus too, and we just want to show that we get that they’re unhappy and we’re not here to antagonize them. We’re here to bring the campus together,” it was essentially done in futility, because as abruptly as they arrived, they were ignored.

As this protest came to a close, another one soon began to erupt, in a much grander scale, and of much more influential nature.

What started off in Bayfront Park, as only a few people, grew exponentially larger and larger by the second. Signs filled the air denouncing hate and promoting love and acceptance.

As the peaceful protest swarmed the city, more and more people joined until a sea of hundreds of individuals were marching I-95 while simultaneously blocking all and any incoming traffic.

University of Miami freshman, Noah Brothers captures the peaceful protest throughout the night.

Students have already planned another protest for November 17th, to speak their minds about the unsteady social state of the U.S., through poetry, song and dance along with the aid and support of special guest speakers.