UCSB and Isla Vista prepare to shut down for Halloween

When I was in high school, I thought all college Halloween parties consisted of the same things: Frat boys decking out in questionable "scary" costumes, girls wearing straight up lingerie, and an overwhelming amount of Snapchat stories showing the very things parents feared might happen when they sent their kids to college.

As a freshman at UCSB, I thought this would be my reality for the next four years. After all, every single time I answered a wide-eyed parent's question about where I was attending college, their nosy, semi-forced smile quickly dropped and was replaced with a concern.

And yes, when I first arrived to UCSB I realized that partying was definitely part of the culture. Midnight Madness, Sunday Funday, a plethora of daygers, I couldn't keep up. Yet, the binge drinking didn't take away from the focused and driven attitude that students had, especially in a structure as grueling as the quarter system.

But whenever the topic of Halloween came about, its reputation didn't quite align with the expectation I had in high school.

As some floor-mates described it, Halloween at UCSB was, quite frankly, "dead." And not in a spooky, thematic way. For some students, the death of Halloween came as such a disappointment that they've already started making plans to catch rides to celebrate their favorite holiday at UCLA or Cal Poly.

Soon, I learned that the reasoning behind UCSB canceling Halloween was because of the heavy amount of harassment, overpopulation, and danger that occurred when the holiday was popular here. In fact, the shutting down of Halloween at UCSB has cost the city $500,000 dollars a year, in order to provide a safe campus for it's students.

In 2014, the community of UCSB suffered a terrible mass shooting, with SBCC student Elliot Rodger killing 6 people and injuring 14 others in Isla Vista. When asked if this massacre had any relations to the strict policies during UCSB Halloween, Cassandra Day, senior, said "It freaked people out, for obviously good reason, and when people get scared, they react."

However, she believes that the main reason for the shut down was because UCSB's large scale partying events, like Halloween and Deltopia, were some of the main reasons for UCSB’s party school reputation. "The school administration wanted to clean up our image," she explained. "So they banded together with law enforcement to make sure it got cut down."

As a freshmen living in an off campus residential dorm, I received an email regarding a list of safety rules for the weekend. The Division of Student Affairs and UCSB Major Events Committee also attached a flyer to the email, outlining what was and wasn't legal during the week of Halloween. Not only were overnight guests not permitted in any hall from 5pm onwards, but police roadblocks would be placed at six intersections from 4pm to 6pm each night from Friday to Wednesday, preventing vehicle access to Sabado, El Nido, Trigo, and the all too notorious Del Playa road. 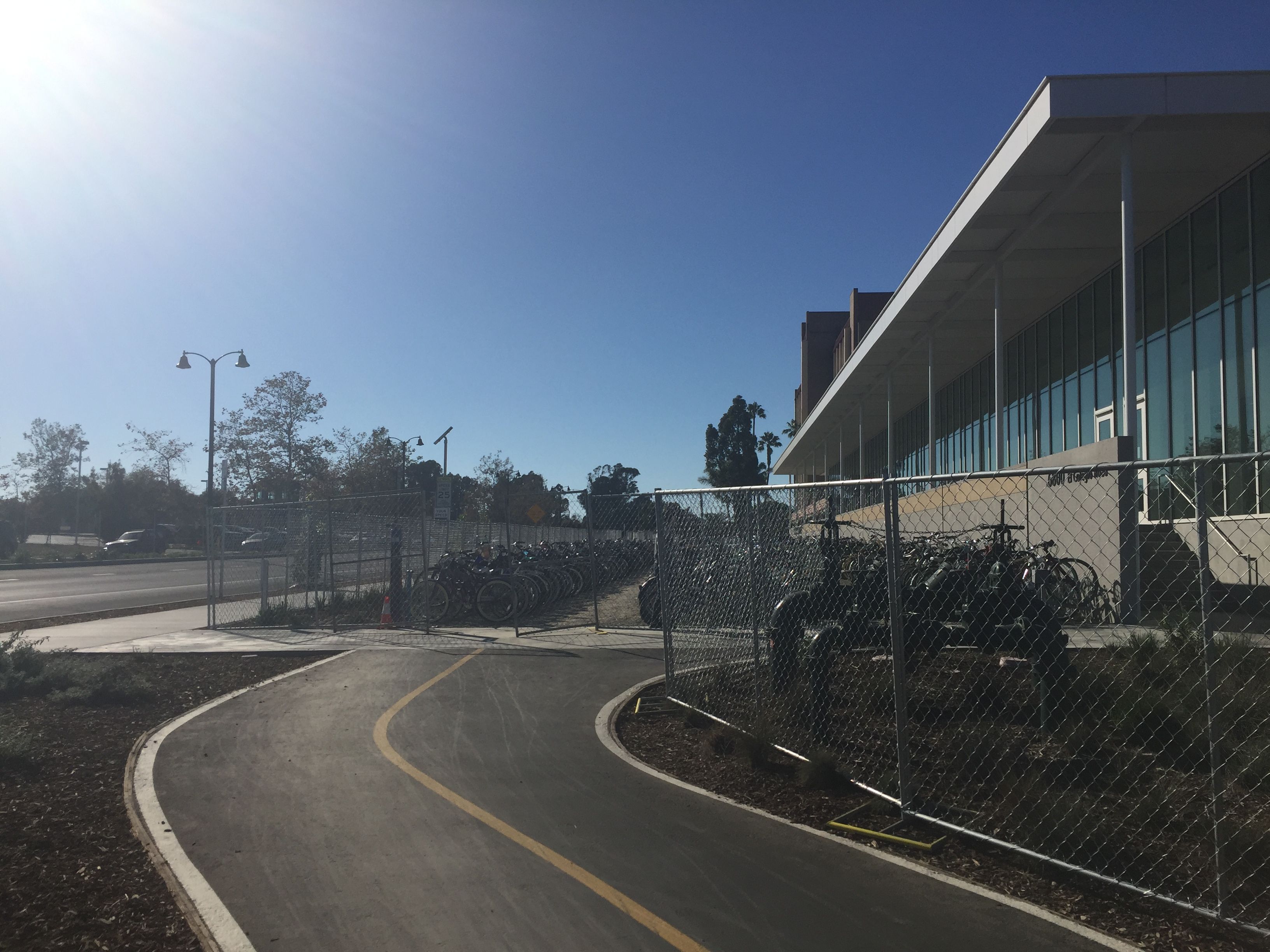 Santa Catalina dorms, a UCSB residential hall, is gated off in preparations for this weekend.

As for parking, all cars in 6500-6700 Del Playa, 6500 block of Trigo, Camino del Sur, Camino Pescadero (both between Del Playa and Trigo), and El Embarcadero must be moved off the street by 3pm on Friday, October 27th, until 6am on the coming Wednesday. In regards to uber, lyft, or taxis, certain parts of the campus will be closed off, and these vehicles will be directed to a designated pick up and drop off section in the area. 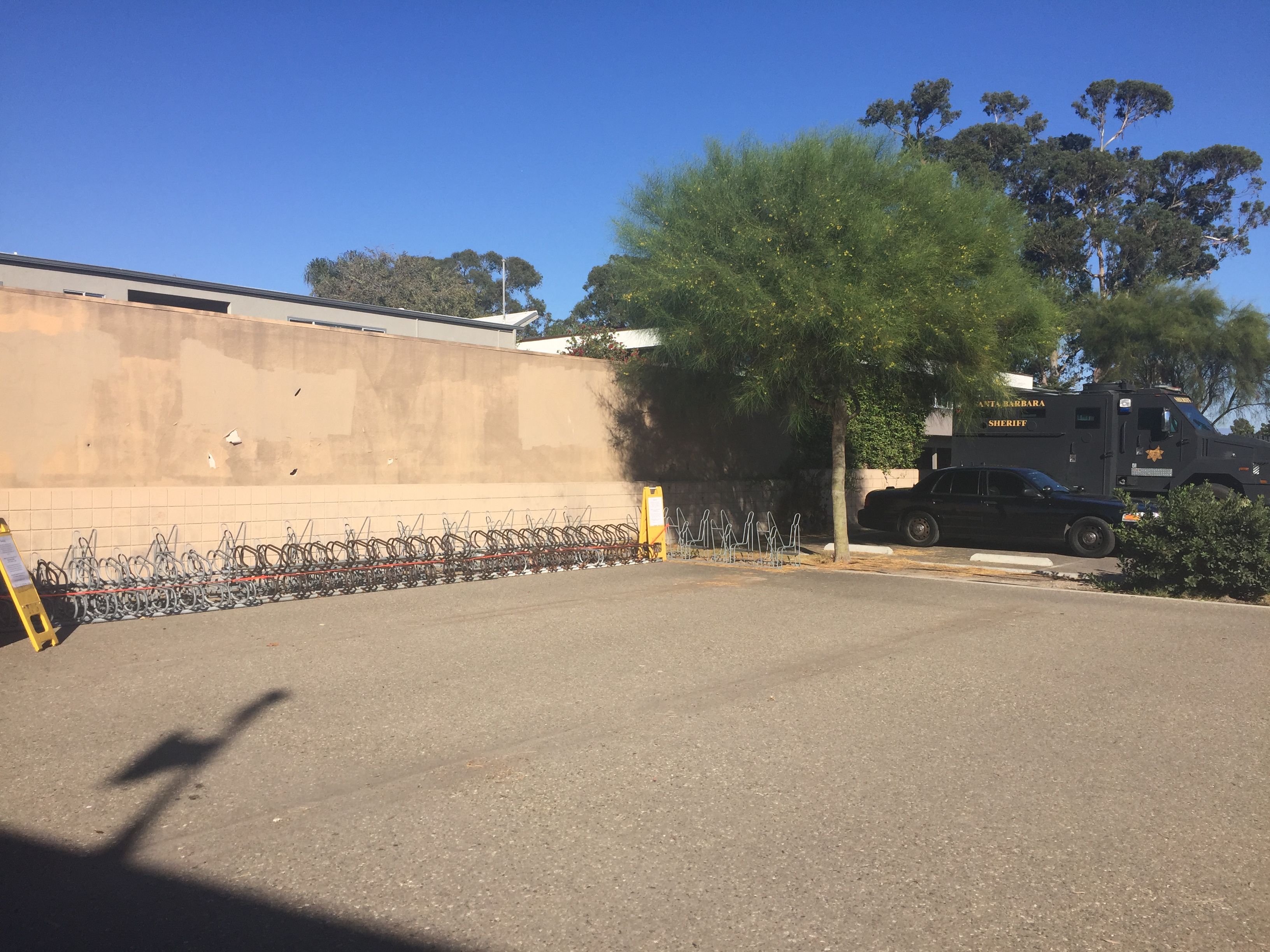 Unavailable bike spaces next to the Isla Vista Theater on October 27, 2017. This lecture hall will be one of the many stations for the Santa Barbara police over the weekend. The SB County Sheriff truck is seen in the next parking space over. Any student who's bike is parked here is subject to impound.

Along with this, the flyer included a list of 10 fines, one labelled as the "Festival Ordinance," which made it illegal to play live or recorded music out loud at one's residence. The fine? $500.

Kiana Baghaie, a junior at UCSB, recalled her Halloween experiences from the past two years that she's been going here. "It's been very uptight," she explained. "Understandably so though, because out of town-ers and large parties have disrupted the community in the previous years before I came to UCSB."

In terms of "out of town-ers," in the past, UCSB has experienced a number of non-UCSB individuals overpopulating Isla Vista which caused immense trouble. In 2012 alone, there were 249 citations given, 196 jail bookings, 71 medical calls, and 19 search and rescue calls made. Most, if not all of the cases, were related to public intoxication and alcohol poisoning.

Of the arrests, 90 percent in past years have been made on non-UCSB students. Throughout the years, less than 10% of arrests made involved UCSB students. 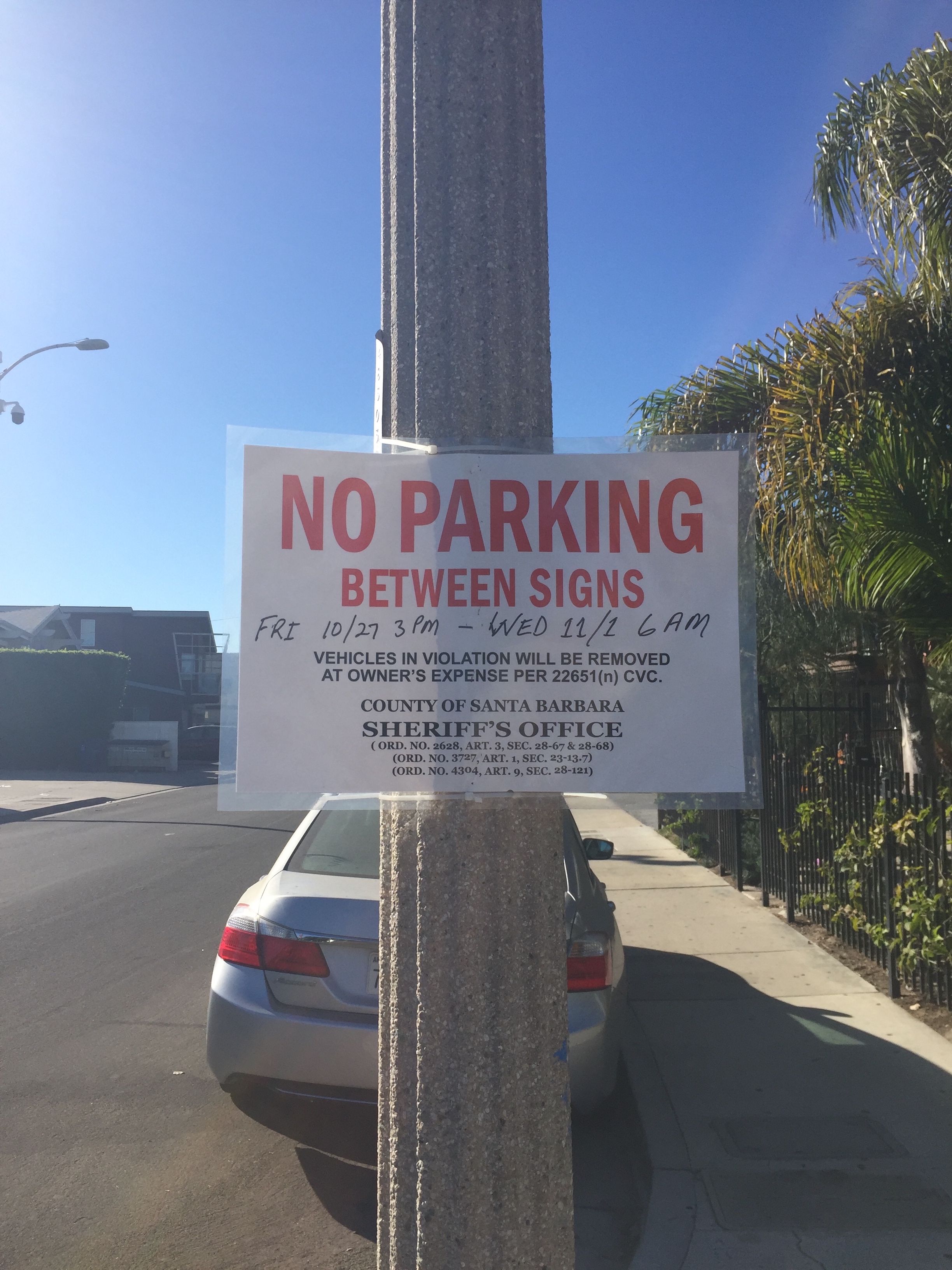 One of many "No parking" signs posted up around the area. This one is on Del Playa road.

Is it worth it? Many believe that this time of the year drains too many of Santa Barbara County's resources, including fencing, parking barriers, and overall police energy. Yet, the excessive thought behind all of this goes towards one thing: community safety. "If you don't try to control the number of people that are getting hurt, you will attract more people who want to hurt others," Yashvi Tibrewal, freshman, shared. "And that's because they think that they can get away with it."

Jenna Gatto, also a freshman agreed, noting "The community isn't just us. We have to be mindful that its a collective. There's an elementary school right by the Santa Catalina dorms, there's a retirement home off of El Colegio, it's not just us."