Looking back to Student-Youth Resist the Presidential Election

On November 9, 2016, UCSB’s Student Activist Network held a solidarity rally at Storke Tower in response to the bizarre outcome of the presidential election. A diverse group of about 300 individuals ranging from college and high school students to faculty and staff, including UCSB professors, showed up. Many different speakers unapologetically expressed their discontent, dropped their two cents on the matter, and shared truly inspiring words that day.

I missed the demo that broke out in Isla Vista the morning after he was elected. Actually, I got the memo late and showed up as the crowd was dismantling. In my defense, these rallies spontaneously took place at around 3 AM. But I did make sure to be part of the crowd that gathered on UCSB campus the following afternoon. I woke up earlier than usual that Wednesday morning from a restless night, threw my Mexico soccer jersey on and headed to Storke Tower. I had no idea what to expect yet I hoped this rally would exceed my expectations to regain lost hope. Little did I know, not all hope is lost, I came to learn as I stood in solidarity with fellow Gauchos along with Chargers of Dos Pueblos High School (DPHS).

“At first it was just a small group of students that started following me and little by little it turned into this big group; everybody was walking behind us.”

History has taught us that whenever society is hit with plague, as it often is, it is always met with an innate, humanistic, oppositional response. kind of like how your immune system fights off disease. Whether the fight is enough is a question for another day. A better question to ponder on is how social movements occur. No, really. How do social movements happen? And what is their significance? 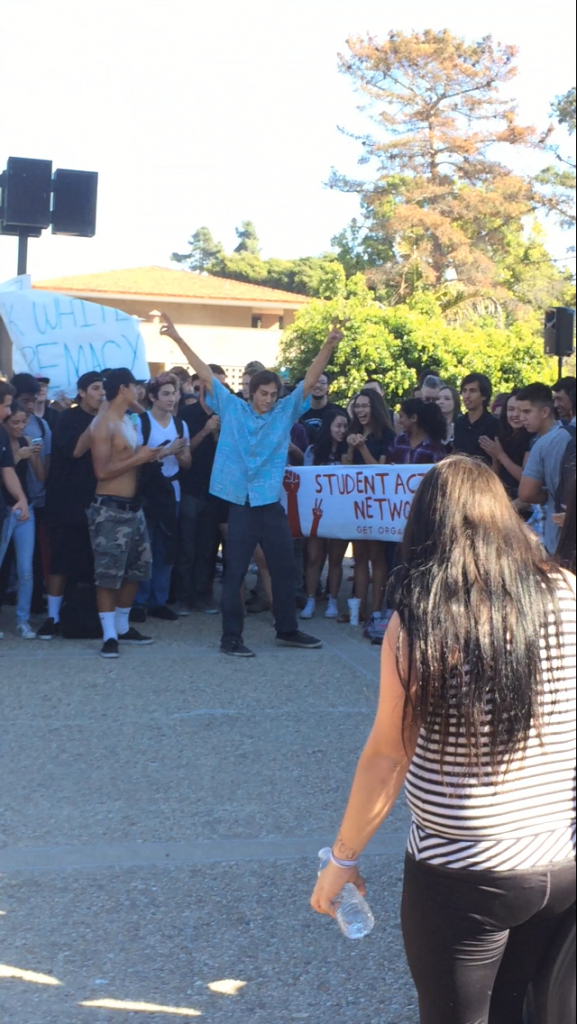 I sat down with Dennilson “Denny” Alvarez, senior student-activist of DPHS.

After going back and forth with Denny and vigorously looking back at the day students resisted the results of the presidential election, I realized that there is a silver lining to this madness in which we find ourselves in. I wondered though, what transpired that lead high school students to mobilize and literally walk three miles out to UCSB?

How did you guys hear about the anti-trump rally at UCSB?

“I’m not sure who organized the walk-outs at our school. All I know is that when people walked out, everyone was standing there all awkward, without any real sense of direction. That’s when my friend from La Cuesta Continuation High School told us about some sort of meet that was happening at UCSB. I told everyone, ‘we should go!’ but they all just looked at me like I was crazy.

“It’s powerful for a bunch of people to walk out but to just stand there kinda kills the momentum, you know?

“We can’t just stand here and do nothing. We gotta mobilize, we gotta move, we gotta head over there. F*ck It! Whoever wants to come, follow me! At first, it was just a small group of students that started following me and little by little it turned into this big group; everybody was walking behind us.”

It’s incredible to bear witness to such a diverse, united, and brave community come together like Isla Vista did on November 9 aka the day student-youth resisted the presidential election. What probably stood out to me the most, however, were the words of Justin–the kid who speaks at the end of the video above. Justin, DPHS  student, talks about how he was always part of the “neutral party” prior to all of this. In fact, when he first heard the news of the new president he simply “shrugged it off”.

But things have changed not long since the election results. Justin finished off his spiel by explicitly stating that he now stands with “the people”. Stand for something or fall for anything, right Justin? Unfortunately, there’s no video footage of him saying this in its entirety because my phone decided to run out of storage right at that very moment. But the reason this is so striking is because he’s white and it’s far more impactful for a white male to speak on the injustices their racial counterparts undergo.

In the regressive trump-era which is doing everything but making America great again, the revolutionary youth will continue to resist.If one thing is clear is that this election, as disgraceful as its been, has sparked an unprecedented resistance- one which includes youth as the spearheads of a modern social movement(s).