What You Need to Know About the Measure U Referendum

The ASUCI elections are upon us and one of the most critical issues up for a vote is the Measure U Referendum. So, what’s the big deal?

The Measure U Referendum is a $3 quarterly fee to fund and support the operation of UCI’s student newspaper, the New University. The New U is an independent and student run organization that currently only receives monetary support from advertisements and the current Measure U referendum, which is 99 cents a quarter. The New U says that they have had to cut print circulation and staff salaries in order to keep the print version of the newspaper alive.

According to an editorial on their website: “We understand that tuition already puts a hefty monetary stress on students, but if you vote to contribute just $3 to the New U each quarter, it will be enough to keep UCI’s journalistic legacy going. A newspaper is nothing if not transparent – we are not here to take your money and spend it frivolously without your knowledge.

“Our intentions are simple and clear: we want to continue recording and spotlighting UCI’s stories, from its flaws to its achievements, for students and for posterity. Whatever we do, we always keep our readers in mind. All we ask in return is that you take a few seconds at the polls to show your support, and pick up a newspaper while you’re at it.’ 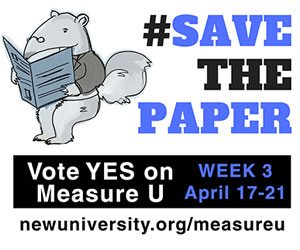 Essentially, Measure U is an extension of the previous referendum with an increase from 99 cents a quarter to $3 a quarter. Only undergraduates would be charged this fee.

In order to pass, the referendum needs a 60% ‘Yes’ vote and there must be 20% voter turnout. At the time of publishing this article, the undergraduate voter turnout rate was 16.05%.
The election closes April 21st at 5pm. You can vote here.

According to the New University website: “The New U is UCI’s official and only student newspaper since 1965; it is the oldest and most consistent student publication at UCI, and has been printed weekly, uninterrupted for more than 50 years.”