We need to start asking ourselves how ‘nice’ Davis really is

Last Saturday, the Islam Center of Davis was heavily vandalised.

Surveillance video shows someone who appears to be female smashing multiple windows with what appears to be an ice pick and placing slices of bacon on the door handles. 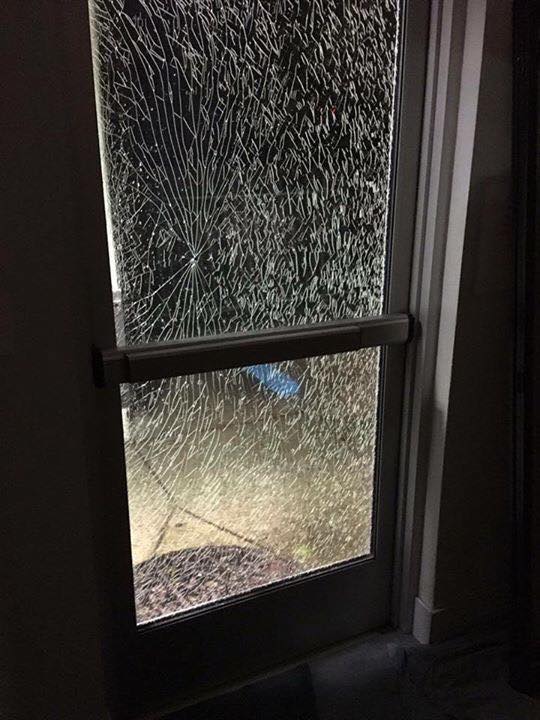 Pictures released by Omar Awad, organiser of the fundraising process for the Center

Bikes parked around the Center allegedly had their tires slashed. The incident sparked a whole new question in one of the friendliest campuses in the nation: “Are we really nice?” 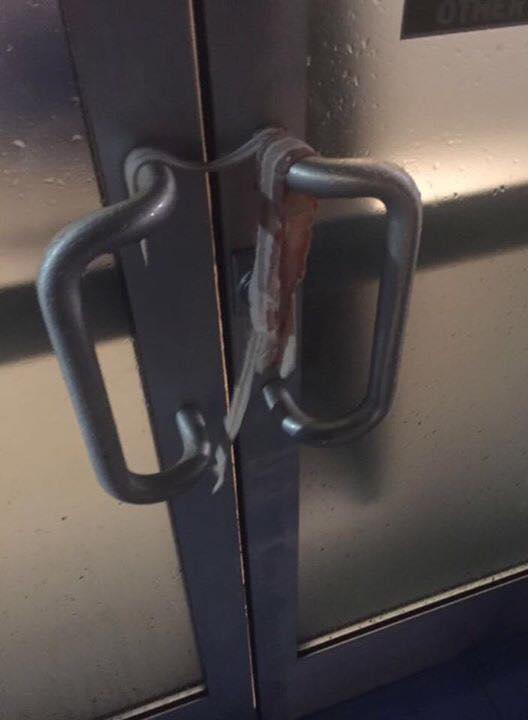 Pictures released by Omar Awad, organiser of the fundraising process for the Center

The Davis Islam Center has created a fundraising site for the repairing of the Center. Right now, they had reached over $22,200 of the $9,000 goal, showing the solidarity of the majority UC Davis students as well as citizens of Davis.

An event was also scheduled this Friday, January 27th, 2017 at the Davis Central Park in order to issue a statement of “love and support for the Islamic Center of Davis.”  The act of aggression didn’t divide Davis but actually brought people closer together. It was quite surprising personally to see the amount of money donated to the center in so little time.

UC Davis administration and the Mayor of Davis have released a statement regarding this issue:

“We want to express the disgust, outrage, and sadness we feel over this incident. We know that it has caused, and continues to cause, great distress and fear among members of the Muslim communities at UC Davis and in the City of Davis. We extend to both our deep sympathy and unwavering support.” 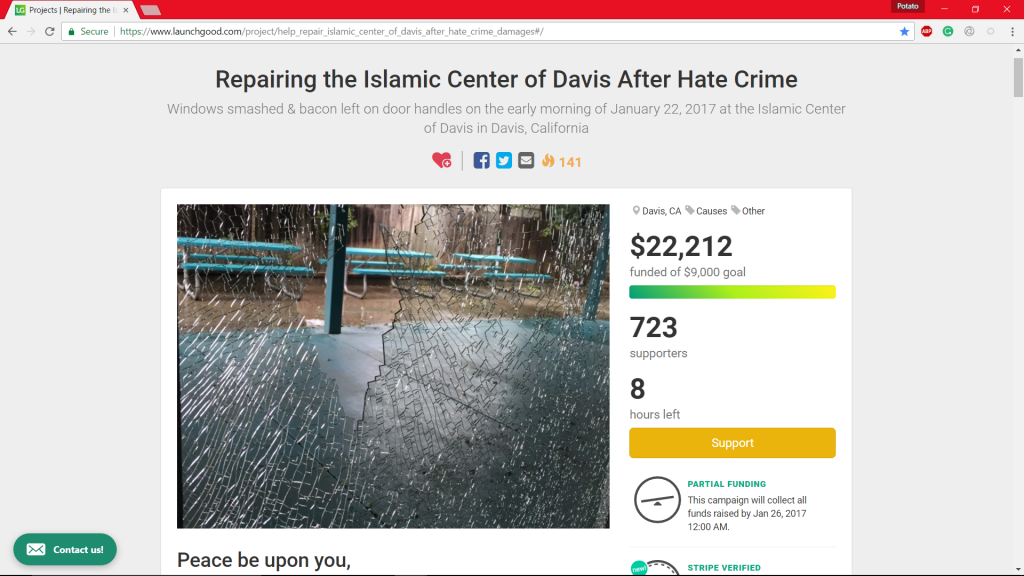 Muslims weren’t the only target of hatred, as students with different political opinions are also under fire. Recently, Facebook feed with this screen grab spread like wildfire, with numerous students claiming that they were the victim/receiver of the death threat.

The picture they shared, however, were all the same, with the same time shown at 9:05, same provider, same signal strength and same battery percentage. Student Affairs has considered this as a hoax. 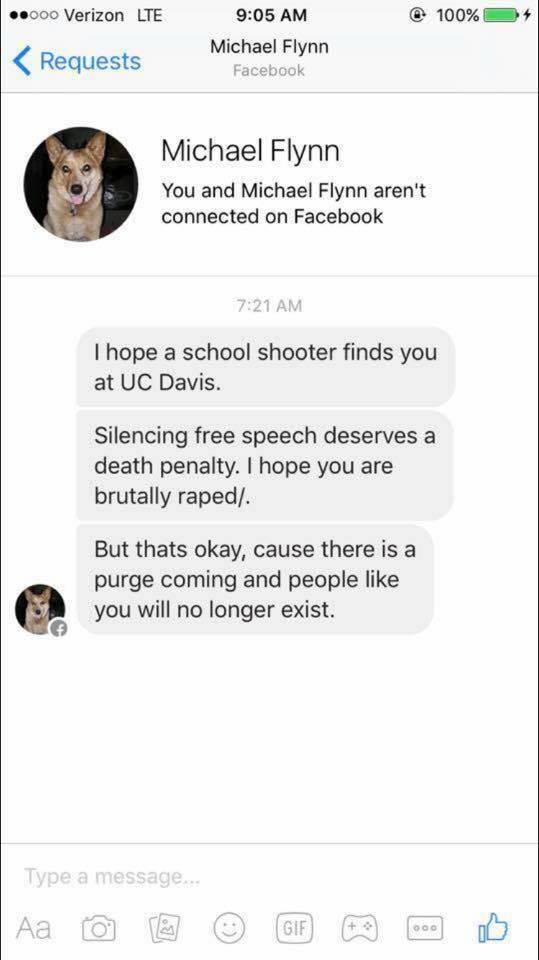 While most of the people who posted the image either deleted it or edited it into saying they got it from a friend, we spoke to a student who received one. Jane*, a UC Davis student, said she’s shocked by the Student Affair action.

“It’s so wild that student affairs’ first response to a death threat directed at a student is one of skepticism. It’s cowardly and dangerous. They know that students are getting harassed online but they don’t want to take responsibility for the results of inviting a fascist to campus. ” 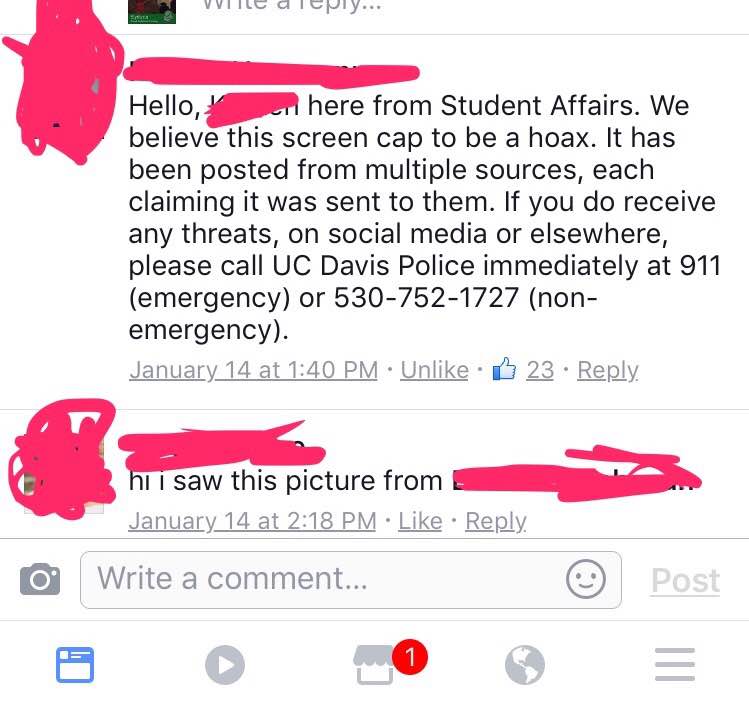 What do I think about all of this? If the story Jane told me is true, she had a couple of friends spreading the screen grab around saying that one of their friends received the death threat. The news however spread and other students took it and claim it was theirs.

The account sending that message was newly created and was later deleted. It also shows the problem of a new generation who want to be victims and the oppressed so much that they took away the attention from the real victim, the real target of hate crime, which is concerning.

*names have been changed