Vandalism yet again, this time in open daylight

Yesterday, the Berkeley College Republicans (BCR) posted a video of an unidentified man, presumably a student, bending and breaking one of their signs. The event occurred in the afternoon on Sproul Plaza next to the BCR’s booth.

The video shows a member of the BCR approaching the perpetrator and informing him,

“Um, I mean you just, uh, vandalized our property.” 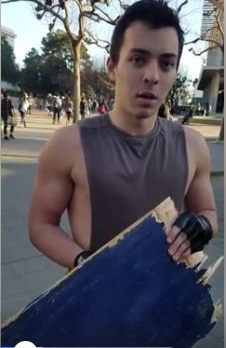 To which, the perpetrator, a man dressed in a deep-cut muscle tank and basketball shorts, responds with “yeah, I did,” and snickers at the BCR as he carries part of the sign. He continues by saying, “You’re supporting violence; you’re supporting Donald Trump.”

The BCR interrupts him to emphasize, “You’re literally committing vandalism by destroying property.”

A female student in support of the man in the muscle tank attempts to stop the BCR from filming, claiming some right to privacy, but the BCR informs her that they are in a public space and her accomplice was, himself, committing a crime.

In response to the BCR’s request for assistance in identifying the two individuals, Facebook user Brock Weyman responded facetiously:

In response to this event, Associate Chancellor Nils Gilman issued an email to campus students and faculty about intimidation on campus: