March to End Rape Culture: What it is and the significance behind it

It’s time for survivors to have their voices heard

On Saturday, September 30th, March to End Rape Culture will be hosting their march at the Thomas Paine Plaza.

It will be highlighting what rape culture is and figuring out ways to end it. This is an event for survivors and allies to seek comfort in, to feel that they have a voice, and to shout that enough is enough.

There will be a line up of TBA special guests and organizers who will be speaking on different aspects of rape culture. This also includes some guests sharing their poetry and music as their way to speak out.

On the Facebook event, it is reassured that this will be inclusive of all genders, sexual orientations, abilities, ages, and races.

Laquisha Anthony, current Media Representative stands strongly behind this event and it’s aim to be inclusive.

“We expect a safe place for survivors and where all people can support survivors, learn more, and take a stand.” Anthony said.

Therapists will be around on site for anyone who feels triggered from these events, particularly if some of the posters that people bring may be considered offensive.

Making sure the crowd feels safe is one of the most important aspects of this event so anyone containing a poster or something that is viewed as offensive or triggering will be asked to remove them. 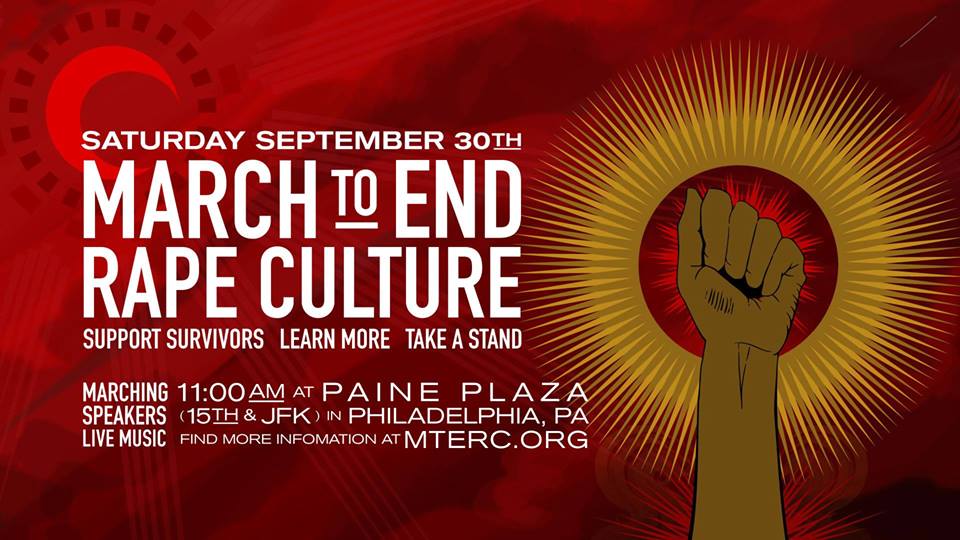 What is rape culture

According to Oxford Dictionary, Rape Culture is defined as a society or environment whose prevailing social attitudes have the effect of normalizing or trivializing sexual assault and abuse.

On MTERC’s site, one of their biggest concerns is that too many people know survivors or are survivors of rape and sexual assault. Another highly concerning issue is the way society views and handles ways we respond to rape.

When these issues are ignored, not taken seriously enough, or unfortunately become acceptable, it continues to create such a dangerous view of them.

People become terrified to speak out because they have a huge fear of how people will react. People don’t get taken seriously enough, even when there is all the evidence needed. Sometimes people even get death threats for reporting their rape or sexual assault.

It is time for society to finally stop holding such a toxic view on rape culture and start listening and taking action.

March to End Rape Culture is a group where members come together at rallys and march to raise awareness.

Posted by March to End RapeCulture on Tuesday, August 8, 2017

In 2011, a police officer in Toronto spoke to college students and said that “college women shouldn’t dress like sluts” as his way of advice. This sparked the first ‘Slutwalk’ that occurred on April 3rd, 2011 in Toronto.

According to CBC news, Sonya Barnett, the organizer of the walk, wanted to change the way the word ‘slut’ was used and change the way victim-shaming is handled.

Philadelphia also had their first ‘slut walk’ in 2011, since the movement spread quickly to other cities and countries.

In 2013, the name was changed to “March to End Rape Culture” and the group has continued to evolve to fight against rape culture.

“We re-branded our name to appeal to a wider, more inclusive audience.” Anthony said.

Their focus is on challenging society’s views acceptance of victim-blaming. Other interests include rape jokes, transphobia, homophobia, slut shaming, racism, society on keeping survivors silent, society’s views of the use of bodies as sexual objects, the sexualization of violence, education on consent, sexist media messages, and anything revolving around rape culture.

Anthony has been apart of the group for three years and is part of the planning committee. Each year the committee designates different positions based off expertise and interest.

Planning committee members are approved by the current committee based off of availability and need. People are who interested in joining the movement can be active in multiple ways such as being present at the march, engaging on the Facebook page before and after the march, or by visiting their website.