He has now apologized

A recent tweet made by a Temple University student this morning has sparked anger among students.

The tweet has now been deleted but screenshots of it are still being shared.

The tweeter Nick Van Allen is a forward on the Men’s 1st Ice Hockey team. A stats website shows him appearing 31 times for the team. 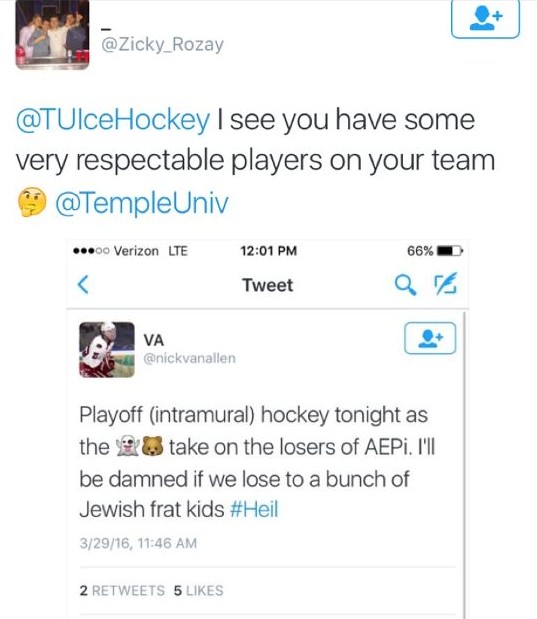 Temple Student Government recently tweeted that they had been made aware of the offensive tweet against a group of Temple students and that Student Conduct is handling it.

They assure students that “There is no place for this behavior here @ Temple.”

The Tab has reached out to TSG for a comment.

Temple Ice Hockey has just released a statement regarding the tweet explaining how they are dealing with the matter internally as well.

“We apologize for the inappropriate comments made by one of our club members earlier this morning. We do not condone or accept this behavior.”

At 2:45pm this afternoon Nick posted a screenshot to twitter with an apology.

He tweeted: “I would sincerely like to apologize to AEPi and everyone I have offended in my earlier tweet. I know it was wrong and regret my choice of words and actions. It was not my intention to offend anybody. Again, I deeply apologize for my comments made earlier.”