Today students received a message from Temple Police stating that a threat was made online against a University around Philadelphia. The information is from the Bureau of Alcohol, Tobacco, Firearms and Explosives, or ATF, and holds that an action could take place at the unspecified school on Monday, Oct. 5 at 1p.m. central time.

The e-mail sent out by Temple Police.

The message maintains that law enforcement is not aware of a specific threat, but security around Temple’s campus will still be increased.

Other than the increased Police activity on campus, Temple’s schedule tomorrow is as normal.

Although the threat is not necessarily aimed at Temple University, many students are concerned about the possible safety risk and the fact that they still have to show up for class. Some took to Twitter to vent their frustration. 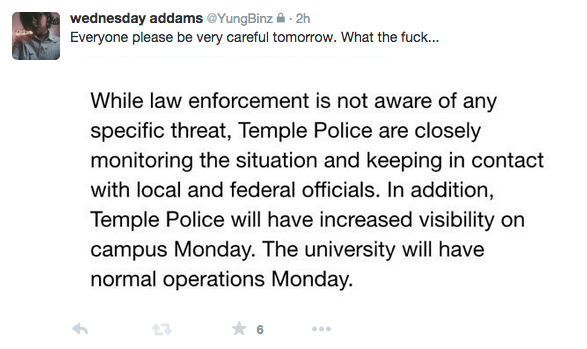