Nich Hoffman started DJing in January, "since the week we got back from winter break". He purchased his DJ equipment and landed a job at DJ's on the Hill.

Now, less than four months later, Hoffman has been selected as one of the headlining DJs for the Silent Disco at Mayfest 2018.

"I've been expecting the contest," explains Hoffman. Ever since he heard about the competition for Mayfest 2017 and Juice Jam 2017, Hoffman considered entering. One of his Phi Alpha Delta brothers tagged him in the comments of University Union's Facebook post, announcing the beginning of this year's contest. 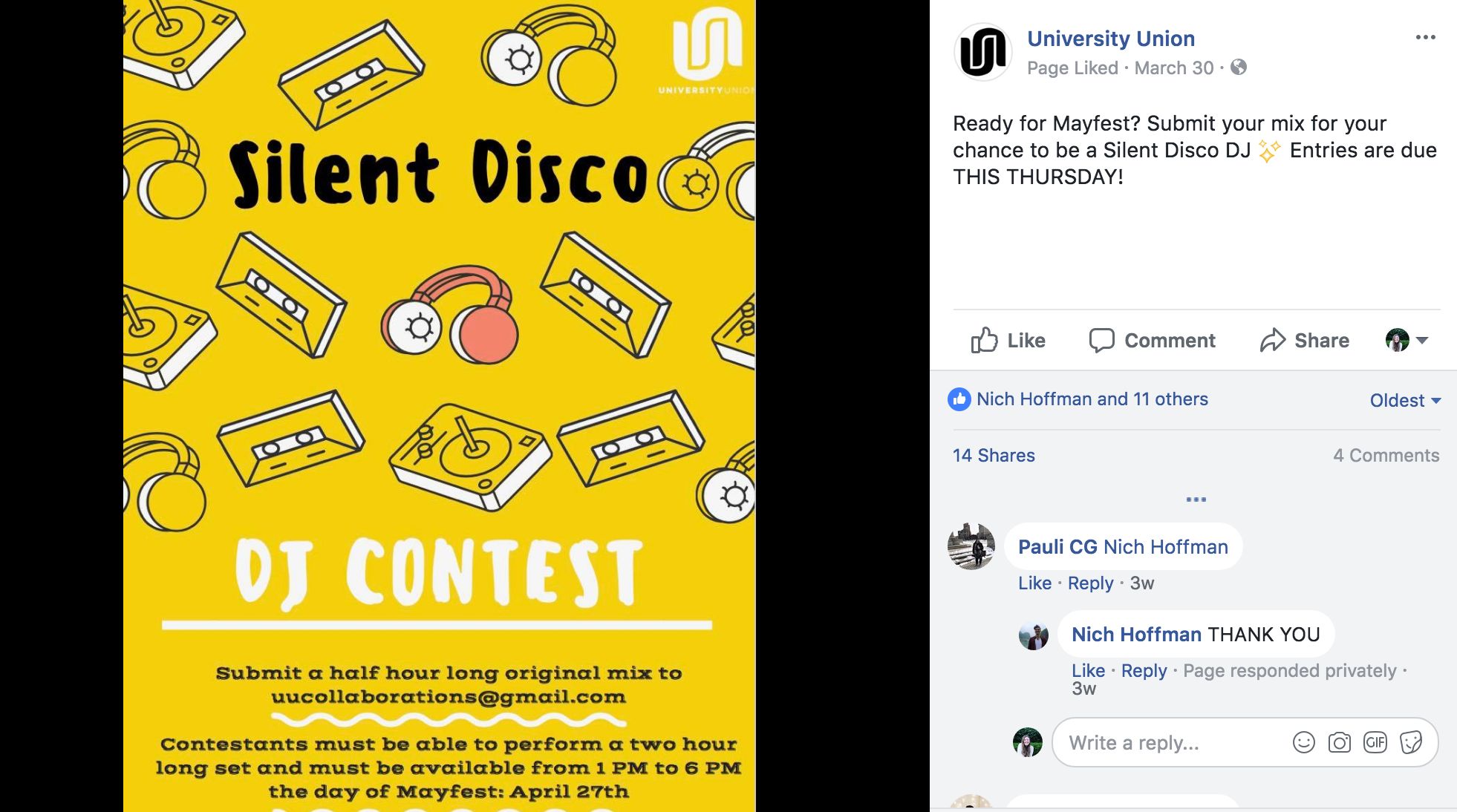 Immediately, Hoffman began searching his music. "I went through my music," explains Hoffman, "and realized I didn't have enough music to do what I wanted to do".

He reached out to friends through Facebook, asking for their favorite drops and songs. "I had the fucking idiots who would send me like "The Lumberjack Song" from Monty Python… and then I had friends who are hardcore EDM fans who sent me a lot of [good] shit." Eventually, Hoffman had a large enough collection to begin production.

Hoffman spent days recording, matching the tempo and key of various songs, beats, and tunes. Once he finished recording, Hoffman entered his submission. "I didn't even listen to the whole thing," he comments.

Hoffman knew not to get his hopes up, but still had a good feeling about his submission. He knew he was going up against many good college DJs. "Then it happened!" he explained, "Within 4-5 days I woke up to the email… I woke up to an email that said ‘CONGRATS, MAYFEST DJ!’ and I said ‘Wait… What?'."

Listen to Nich Hoffman's audition for the Silent Disco HERE. 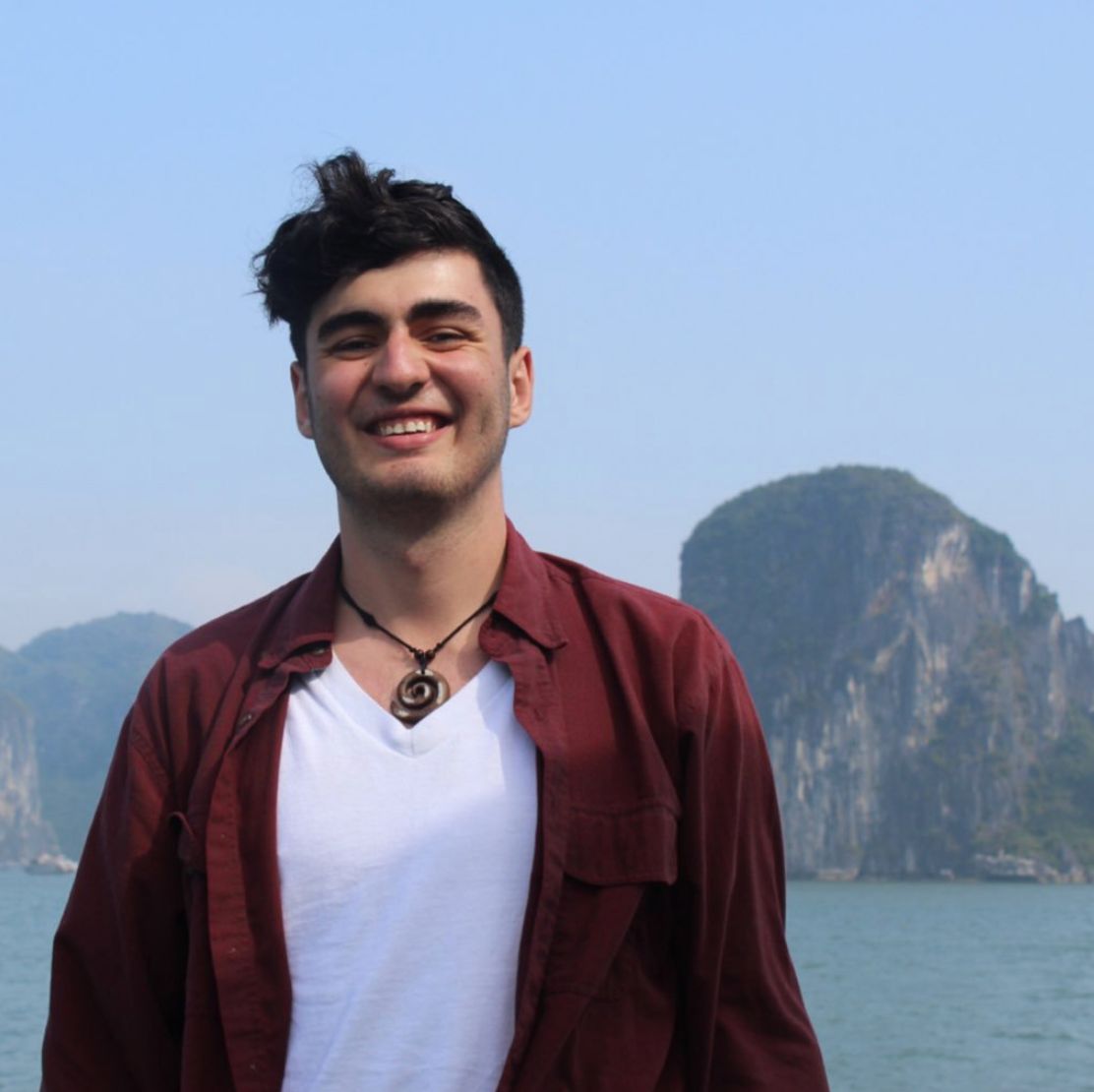 Hoffman is an International Relations major with minors in Political Science and Private Music Study. He is from Ann Arbor, Michigan and currently works as a DJ at DJ's on the Hill.

In the future, Hoffman plans to build his DJing portfolio and to eventually gain a residency at a nightclub. And, perhaps someday be discovered and offered a record deal. "Work hard and hope it happens", he says.

Keep up with Nich Hoffman's music on his SOUNDCLOUD.

Originally a Music Composition Major, Hoffman found it difficult to express himself through classical music under the constraints of his university professors. Once he swapped into International Relations, Hoffman had more freedom to create his music.

"I know I am in the International Relations major, but I really fucking hate school. I don't see myself working in a cubicle job for the rest of my life, working in a government job." explains Hoffman, "I see myself still doing something with the arts, whether it's working at a record label or getting a residency at a nightclub."

Working at DJs has provided Hoffman with a platform, just not the one he desires. On the job, Hoffman is required to play top 40s music, "background music" for the college students that frequent the popular bar. Hoffman explains, "This is a college campus. Everyone wants to sing 'Closer' and 'Mr. Brightside'". But, Hoffman prefers to play hard EDM.

While Hoffman's Silent Disco submission gave him a little more freedom with music production and provided him a stage, University Union was not looking for hard EDM, but rather a festival style set. Hoffman was still unable to share his unique style with campus.

So, Hoffman, along with a few other campus DJs, decided to host their own "concert" to express their own unique styles of music. Hoffman also wanted to use the event to raise money for charity, "to help refugees and children around the world".

DJ LINE UP FOR RAVE TO SAVE [the kids]