It’s not as glamorous as you may think

At 4:30 a.m. she boards the bus to MetLife Stadium to cheer on the Syracuse Football team against Notre Dame. MetLife is the biggest stadium Nikki has ever performed at. Cheerleading comes with a lot of traveling and she loves that about the sport.

Every year Coach Dena and Coach MacKenzie, the SU cheerleading coaches, choose 16 team members to compete at the National Cheerleading Championship held at the Walt Disney World Resort in Orlando.

Nikki was one of two freshmen chosen to compete last year. For the first time in Syracuse University history, the cheerleading team made it to finals at Nationals. 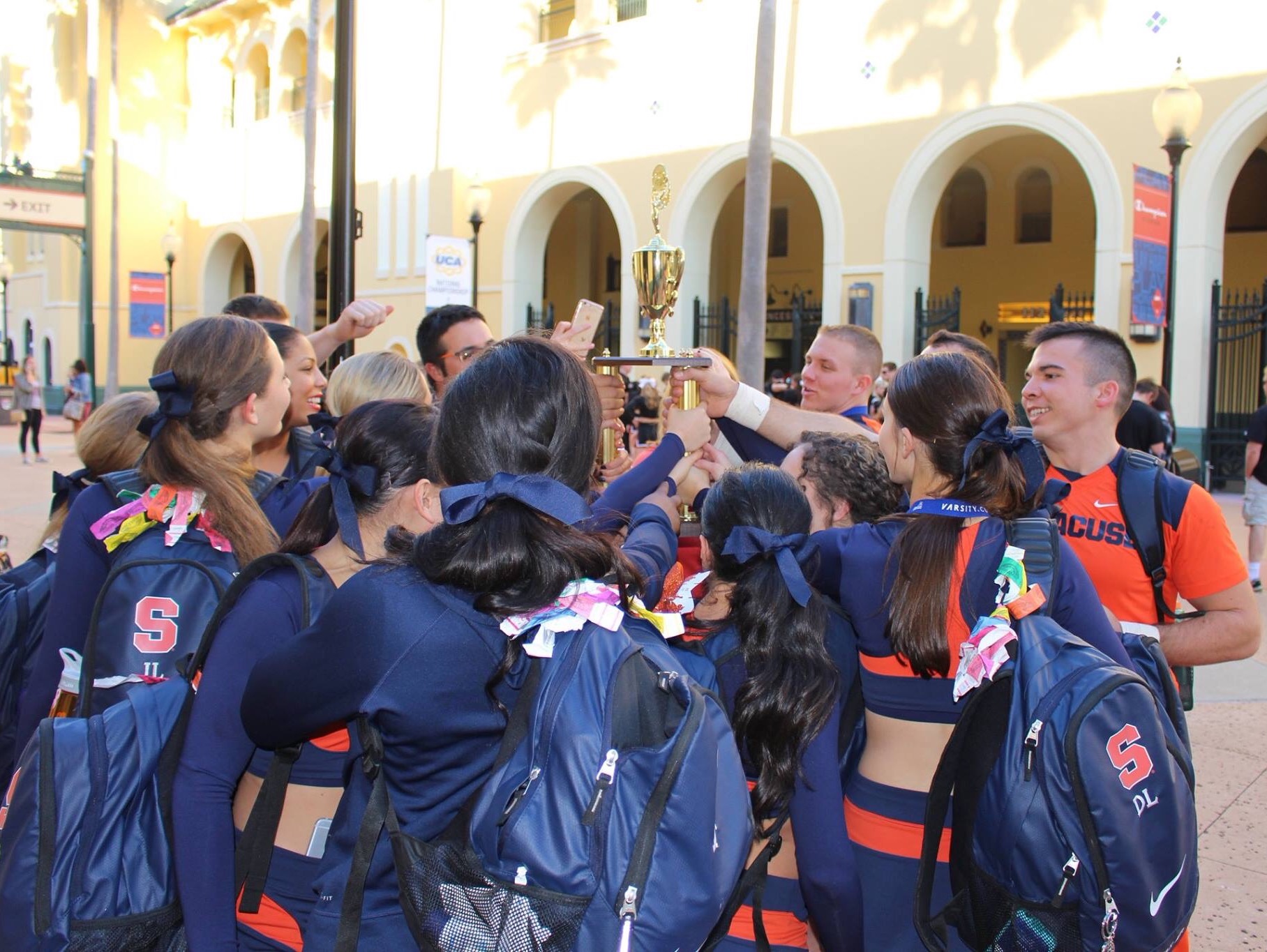 “I love Disney,” said Nikki, a sophomore fashion design major. “The best part is that we get to spend Tuesday through Friday hanging out there. It’s sick.”

Just as you would expect, performing is a nerve-wracking experience.

“I shake before we start each routine,” Nikki said. “Like at Nationals I’ll shake, but once I get out on the floor I literally talk to myself in my head and say ‘It’s not just you. Just because you are nervous doesn’t mean you can mess it up for the whole team. Stop being nervous. Everyone is depending on you.’”

While doing a routine, Nikki says it is important to think in the moment rather than thinking about the next stunt.

“If I’m thinking about flipping while I’m going straight up, my body will do something it’s not supposed to do,” she said.

Trust is one of the most important aspects of cheerleading. The person getting thrown into the air and ultimately caught must have complete faith in her partner.

Before getting thrown up, Nikki thinks to herself, “Squeeze your body and keep it in one fluid position. Keep it straight and don’t flail. Don’t freak out. They’ll get you.”

Developing a deep trust in her partner allows Nikki to focus on what stunt she must accomplish.

“I know that my fate in what happens is through what I do,” she explains. “So if I am being mental that day, that trick is not going to be good. But even on those days I have to be mentally strong. I think to myself,  ‘stand up, point your toes, lock your legs, and do what you have to do to get your job done.’”

Trust is developed through communication, a strong mentality and practice. On Mondays, the team meets from 5:00 — 7:00 p.m. in Manley Field House for cardio training. The team does six sets of sprinting and jogging around the track followed by stair laps.

“It’s hell,” Nikki said. “We run around the track and then we run up the stairs, run around and then come back down and do it again. We call them stair laps.”

On Tuesdays and Thursdays, the team meets for game practice from 7:00 — 9:30 p.m. where they run through stunts, game pyramids and other routines. Strength days are on Wednesdays from 5:00 — 7:00 p.m. That practice includes dumbbell weight lifting, squats and deadlifts.

The team has Fridays off to rest before Saturday’s game day where they put the weeks worth of practice to the test. On Sundays, the team members chosen to perform at Nationals practice from 7:00 — 9:30 p.m.

While every team member cheers in the Carrier Dome, only 10 cheer at away games. They rotate so all 30 members get a chance to perform. Although the team members might wish they could rotate practices, they can’t because it takes weeks to months to perfect a routine.

Devoting nearly 12 hours a week to cheerleading does not allow for much down time.

“I think it’s like dual majoring,” Nikki said. “That’s what I feel and what my other teachers compare it to. I just joined a sorority, but I don’t have the time to be that involved with it. And being a fashion major is so time consuming.”

Because the team meets almost everyday, they spend a lot of time together.

“I feel like I know everything about them. Even things you don’t want to know,” said Alexandria Ferrantelli, Nikki’s roommate who is also a member of the cheerleading team.

Nikki agreed, “It’s true. They are like your family. Obviously you have your fights and your cliques, but when it comes down to it, you create such a special bond with your team. Especially during Nationals when you look at all these kids and everyone has the same goal in their head.” 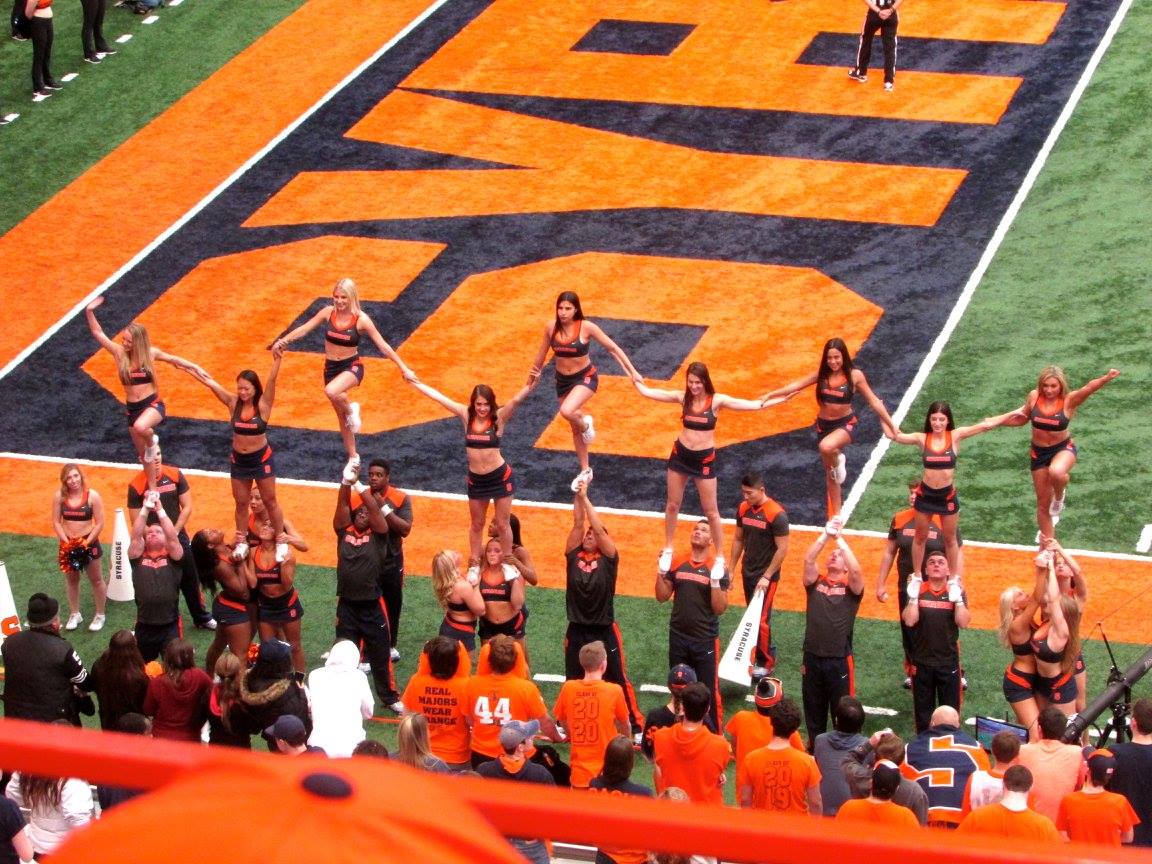 Even though the team practices six days a week, sometimes practice does not make perfect. When a team member says “one, two” everyone gets lifted into a specific position. The second time “one, two” is said, everyone switches positions. And the third time, everyone comes down.

At a UConn game, one member of the team did not know what the first “one, two” meant. As a result, they all fell.

Through that incident Nikki learned, “If one person isn’t on board in cheerleading, the whole thing doesn’t work. It’s a team effort.” 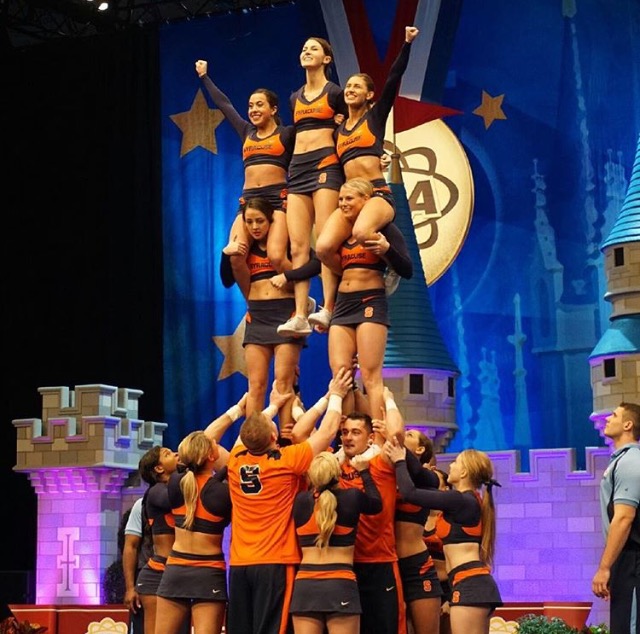 Nikki’s favorite part about cheerleading is performing in front of a crowd.

“I love our fans and that we perform so close to the student section. Looking up and seeing everyone so happy and into it makes me so much more into it,” she said.

Cheerleading is not the safest sport out there. In fact, Nikki said fear comes with the sport.

“I’ve seen everything from people braking their leg on the mat to tearing their ACL. I’ve seen it all and heard all the screams,” she said. “I’ve been really lucky since I only had a bad concussion, a broken nose and dislocated jaw. It’s not like I would quit because I got hurt. I might have an issue with doing the move that caused the injury, but you get over it.”

Nikki only started cheerleading about three years ago. When her sister performed in Broadway’s Bring It On, she was inspired to start cheering. 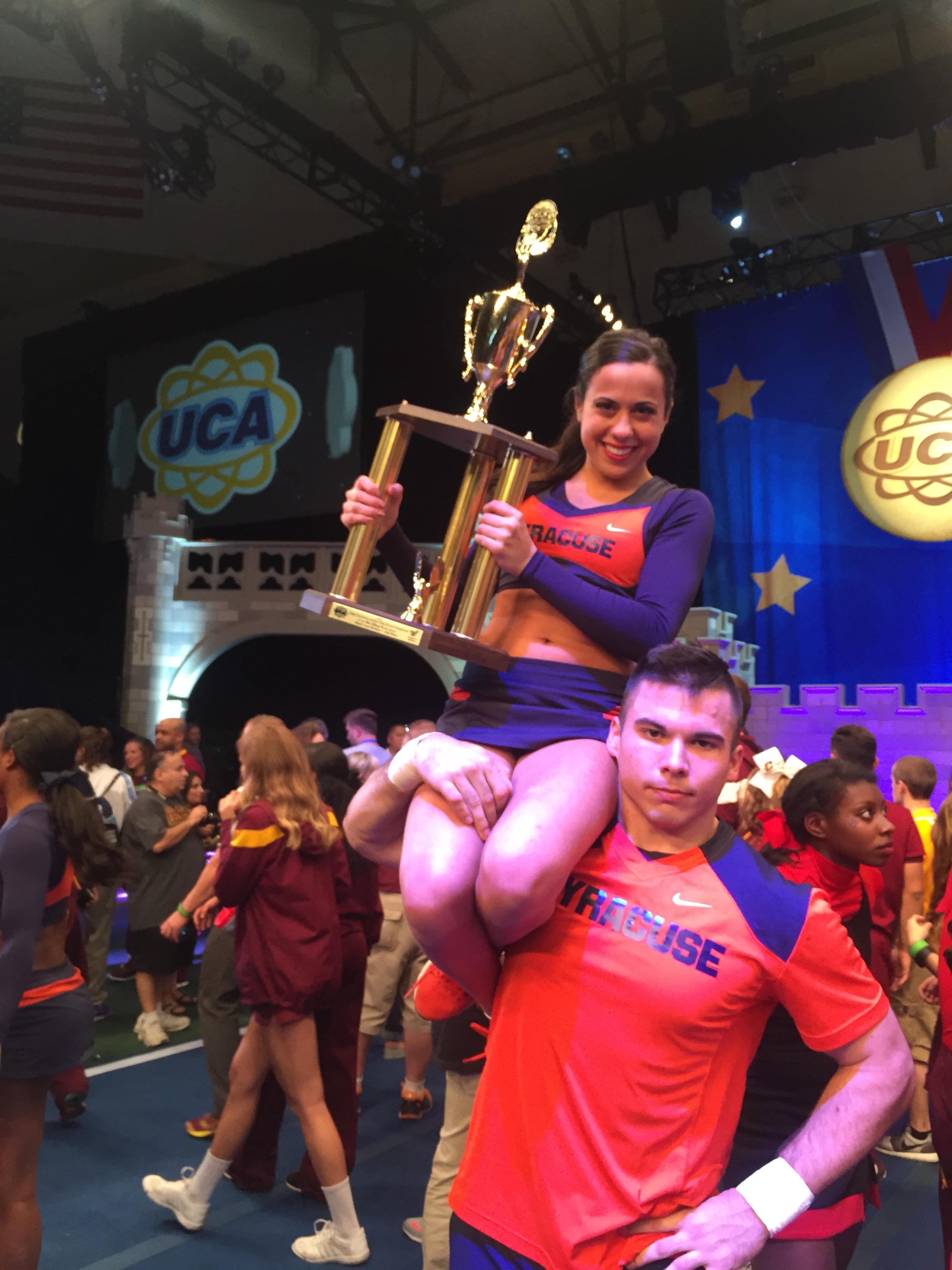 During tryouts, Nikki had to stunt with every boy on the team, learn how to tumble and learn the Fight Song. Only three girls made it on the team from her tryout.

“I was so nervous and intimidated,” she said. “I was trying out with older people and I had never done co-ed before so it was all new to me.”

Every year after tryouts, the whole team goes to UCA Camp at the University of Delaware. This introduces new team members to college cheerleading and gives them an opportunity to learn new moves as well as safety precautions.

Because of her cheering experience, Nikki has advice for those interested in trying out for the team.

“Don’t be scared. If we come off not friendly, we are. We aren’t scary so don’t be afraid to approach us. We would love to help you. Try your hardest and we aren’t going to judge you if you can’t do something. We get it because everyone has been in that place before.” 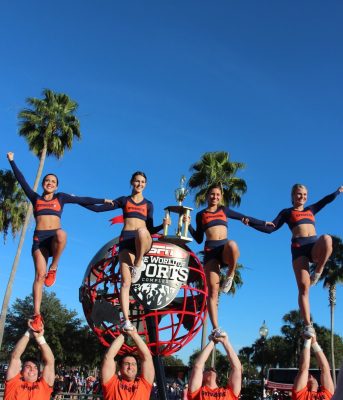