Spare a thought for Uwe Reinhardt, the Princeton professor who has absolutely no idea what it means to be a college student in 2017. You would think that someone who has dedicated so much time to instructing undergraduates would have at least some understanding of, or perhaps even some empathy for, college freshmen, but any sense thereof is utterly missing in Reinhardt’s excessively bitter response to Frank Bruni’s September 2nd The New York Times op-ed, entitled “The Real Campus Scourge.”

In his piece, Bruni addresses what some call the “freshman myth.” That is, students show up to their freshman year of college expecting to immediately make friends, get involved in campus life, and commence what they’ve been made to believe (often by nostalgic adults) will undoubtedly be the “best four years of their lives.” However, when many students find themselves not forming instant connections like anticipated, a feeling of loneliness sets in that, as Bruni points out, can sometimes spur binge-drinking or ultimately lead to mental health issues like depression and anxiety. Many freshmen also struggle with feeling like a “nobody” on campus after being relatively prominent in high school (which may be especially prevalent on campuses such as Princeton’s, where so many students were always considered exceptional back home). 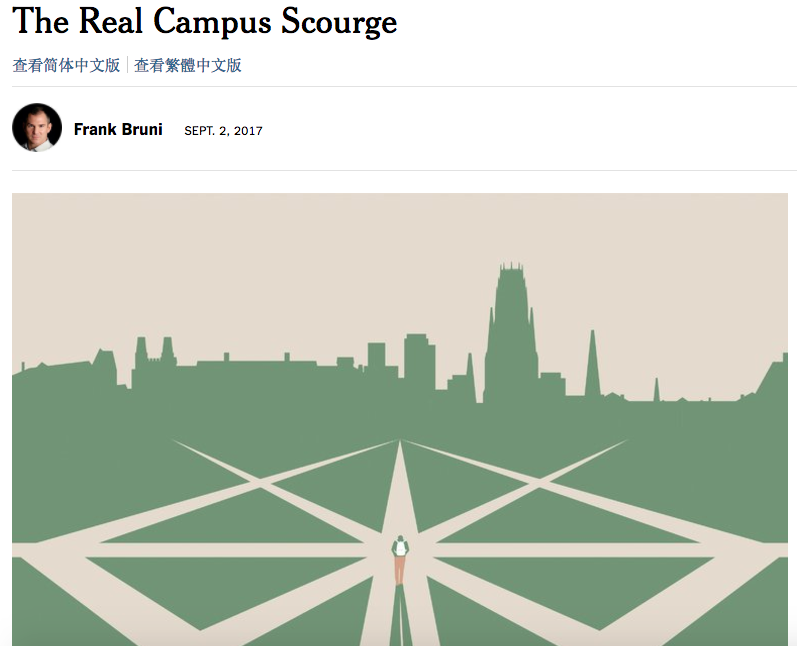 Bruni argues that although many generations of college freshmen have faced similar types of challenges, the overwhelming feeling of loneliness and the perception that everyone else is content is exacerbated by social media. Not only is it tempting to incessantly text or call parents and high school friends to temporarily ease the loneliness, but it is also easy to see everyone else’s carefully-curated social media presence and think their college experiences must be going much better than your own.

Princeton is working to respond to and prevent the greater risks of loneliness and isolation incoming classes are facing. Our first two weeks on campus were fully scheduled with orientation activities, social events, dinners with our residential college advisee groups, and small-group trips off campus, all aimed at helping us make connections. Additionally, Princeton stresses that students can turn to the deans and Directors of Student Life, or schedule an appointment with Counseling and Psychological Services (CPS).

Knowing that these resources exist can reassuring for freshmen. Lucy Chuang, Class of 2021, explains: “I’m from Georgia, which is a 14-hour drive away from Princeton. My immediate support systems are not able to be with me, which has caused me to sometimes feel like an outcast. It is reassuring to know I will be able to have a resource when I need it, and can speak with people face-to-face without dropping $500 on a plane ticket to get home…Although it is not the same type of support, it is important nonetheless to have people you know are here and willing to hear your voice and empathize with your struggles.”

Having support and services available at Princeton represents something very important—a growing emphasis on understanding, destigmatizing, and treating mental health issues in young adults, something that has been neglected by society at large for far too long. Although Paulo Frazao, Class of 2020, recognizes that Princeton is making an effort to support students mentally and emotionally, he thinks that Princeton could be doing better. He has heard his peers complain that CPS often has very little availability left for scheduling appointments.

“Part of the responsibility is on the individual to seek out resources and make the most of them, but it is also Princeton’s responsibility to provide those resources and use their funds in ways that will help the students. It is a shared, two-sided responsibility. Princeton should start by looking towards where there is the most need. Anecdotally, I would say that that is PCS.”

Paulo and Lucy both express the belief that Princeton, and universities in general, ought to provide resources for their students to receive emotional and psychological support.

Professor Reinhardt, however, is still firmly stuck in the outdated and problematic “suck it up” mentality regarding emotional issues and mental illness that advocates have long been devoted to eradicating. To my point, this is Reinhardt’s ever so sage advice: “To overcome the discomfort of loneliness, college students might think of their 18-year-old contemporaries on sundry military bases or in battlefields abroad…After such contemplation the students may take comfort from the fact that they are among the most pampered and highly privileged human beings on the planet. Using loneliness as an excuse for binge drinking is just pathetic.” 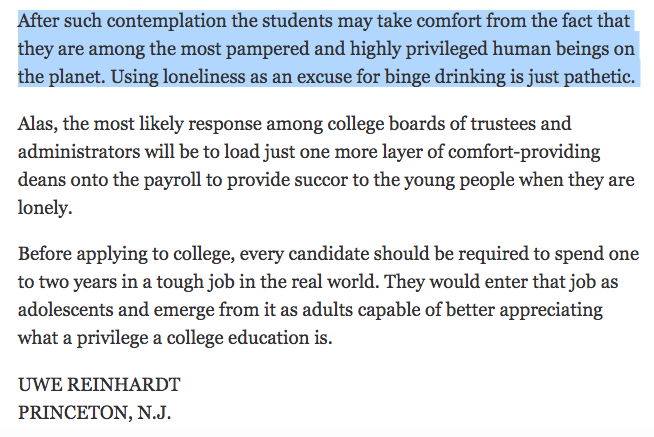 Of course, Reinhardt is correct in that receiving a college education, especially a Princeton education, is an enormous privilege…but no one is saying it isn’t. And although there are certainly worse situations to be in, the pervasive loneliness and disillusionment and their (potentially very dangerous) effects on college students are very real issues that shouldn't be trivialized. Paulo states, “Generalizing the entire population ignores the baggage that everyone brings from home…Even though Princeton is a privilege, making that transition can be very straining and exacerbate those psychological issues students bring with them. It is not always people just looking for an excuse to binge drink. We can’t know what people are suffering from individually and we can’t know what a person is really going through on the inside.”

Lucy relates to this sentiment, arguing:

“To claim that we are all coddled and out of touch is really misleading. Take me, for example. I identify as a low-income minority student and I am now a student at a university that is historically known to be predominately white and higher income. The pressure of not only schoolwork but being put in a pot of many students quite unlike me can lead to anxiety and stress. [Reinhardt] fails to mention that there are other factors at play besides academic rigor. That’s just ignorance.”

So, sorry, Professor Reinhardt, but loneliness, depression, and anxiety won’t just magically disappear by thinking about soldiers on the battlefield; if it were that simple of a fix, mental illness and suicide among young people would be nowhere near as prevalent as they are now.

Seeing as he conveys the belief that colleges should do absolutely nothing to support students experiencing persistent loneliness (which, mind you, can be a gateway to serious mental health concerns), what does Reinhardt think of the deans and other adults at the University who help comprise a support system for students? Evidently, that they’re cutting into his paycheck. Reinhardt laments: “Alas, the most likely response among college boards of trustees and administrators will be to load just one more layer of comfort-providing deans onto the payroll to provide succor to the young people when they are lonely.”

I know I haven’t been here at Princeton nearly as long as you have, Professor Reinhardt, but I’ve yet to meet a dean whose job description consists solely of the task of holding students’ hands and telling them they’re going to be alright.

Reinhardt’s resentment towards and harsh characterization of the current generation of young adults is certainly problematic, but it is nothing new or unusual. For centuries, older generations have been criticizing younger ones and claiming they are “what’s wrong with the world.” Reinhardt’s generation is particularly critical of today’s young people, and often throws around “weak”, “coddled”, “narcissistic”, and even “special snowflakes” to describe us.

As put by Paulo:

“There has always been a tendency of older generations to hail themselves as more hardworking or superior in some way to younger generations…Generalizations are problematic and miss the intricate human aspects of issues. Generalizing and complaining about other generations doesn’t help anyone. As students, we need to be aware of the privileges we have been granted by nature of being college students, but we should also not be afraid to feel vulnerable, or feel guilty for seeking out resources that will help us alleviate that feeling.”

Reinhardt’s trivialization of emotional trials is representative of an aversion to social progress that seems to plague many members of aging generations. I strongly disagree with the idea that emotional stoicism represents strength, and that seeking emotional or psychological support reveals some fundamental weakness. Wanting to have your feelings valued and validated is simply human, and admitting when you need help (and actively seeking it out) can often take a lot of courage. So, Professor Reinhardt, for a member of the so-called “Silent Generation,” you certainly have a lot to say about an issue that you make no effort to understand.