UO is no longer requiring professors to report sexual assaults

The University of Oregon has announced a new policy that professors are no longer required to report suspected sexual assaults on campus.

According to Care2.com, ‘Historically, the university designated a broad swath of “mandatory reporters,” people required to submit reports on known or suspected incidents, but the school will roll back that policy with a student-directed approach that puts power in the hands of victims.’

In the past, Oregon has implemented a student-directed policy, meaning that they have freedom to talk with professors about their experiences without being reported. However, in a letter to the university by Vice President and Title IX coordinator Darci Heroy, the new protocol states:

‘All employees who receive reports of a student experiencing sexual harassment to respond with compassion and kindness, actively listen to the student’s report, and be sensitive to the student’s needs. Once implemented, the new policy will change many employees’ obligation related to reporting that information, which currently requires almost all employees to report to the Title IX coordinator.’ 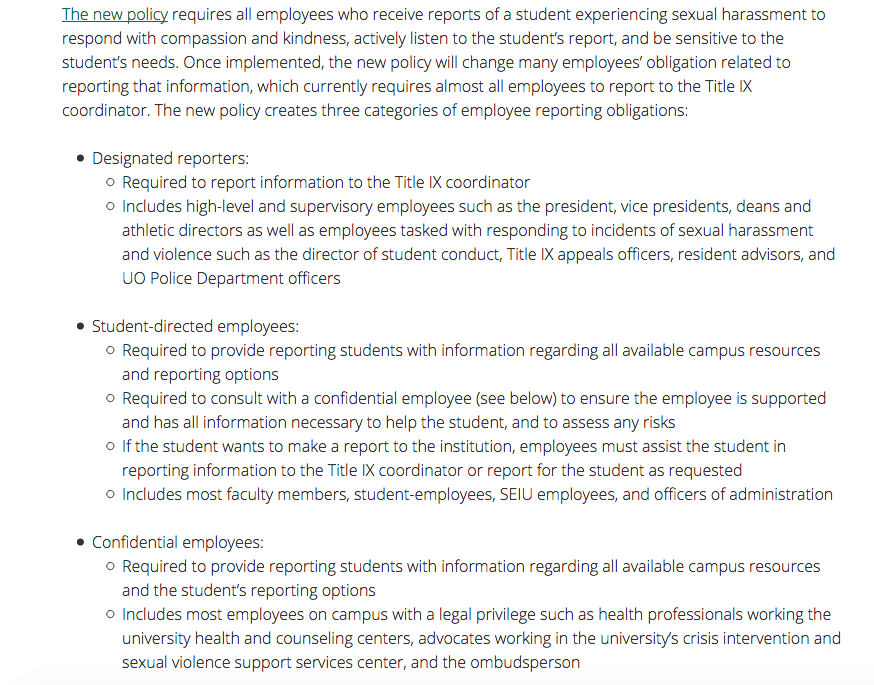 There will be three categories of employee reporting obligations: designated reporters, student-directed employees and confidential employees.

Some forms of abuse are still required to be reported by law under state rules and that can’t be changed by the university. However, some employees are still under non-state laws that follows the ‘responsibility reporting’ model. But police still emphasize that students should be in the driver seat about how to proceed after it’s happened.

Most states have a law saying that, ‘people in positions of power should use their authority to intervene in cases of abuse’ even though some victims don’t always agree. However, some victims prefer to seek counseling or help from a professional source of authority if they’re having trouble processing what they just experienced.

Care2.com also reported that professors are frustrated with the mandatory reporting policies as it ‘interferes with their to help students, that it has a ‘chilling effect’ on conversations about rape.’

Conversations surrounding the reforming of rape conversations resurfaced on campus after a scandal in 2014 in which the university poorly adhered to protocol in reporting a sexual assault, ending in a lawsuit that later sparked a conversation about different approaches to addressing the issue of rape on campus.