‘Just treat us like people’: Homeless at the Ohio State University

We speak with Joseph Ramirez about homelessness, his relationship with students, and his daily grind

Joseph Ramirez has been homeless on and off for nine years, selling papers on Ohio State’s campus to get by.

I first experienced the effects of homelessness during finals week in the fall 2016 semester at OSU. Coming home from a study session at Thompson Library, I started making my way up the stairs of my apartment building, adjacent to High Street. As I made my way to the top floor, I was startled to find a disheveled older man sleeping on the landing between staircases. I passed the man quietly, simultaneously frightened and bewildered by the stranger near my home.

This kind of interaction is not uncommon on our campus, and gave me a lens through which I viewed the homeless community in Columbus. However, my discussion with Mr. Ramirez, one of Ohio State’s most recognizable campus figures changed my perspective for the better. 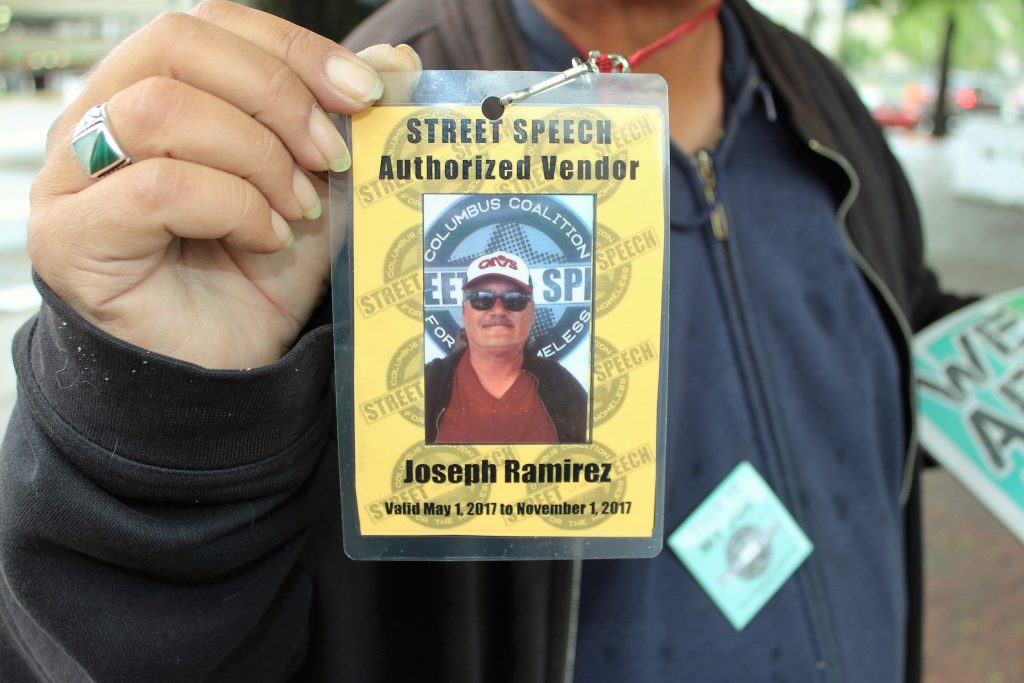 Ramirez sells papers on High Street on behalf of the Columbus Coalition for the Homeless, whose mission is to empower and advocate on behalf of the homeless, as well as educate the central Ohio community about the devastating effects of homelessness on individuals and families.

Homeless community members can buy papers for 35 cents and sell them to passersby around campus, providing them income for food and shelter. Ramirez takes his work seriously.

“In order to do this job, I have to pass drug tests and background checks,” Ramirez told The Tab. “I choose to sell something rather than beg or steal, which is a better situation. They teach us that at job training.”

“I would say about 65 other vendors also do this job. Sometimes people get embarrassed, but you gotta do what you gotta do.  If I don’t ask for help, I won’t have a place to sleep,” he said.

As our conversation continued, Ramirez’s friendly attitude and infectious smile broke through and many community members stopped to say hello. One man even brought him a sandwich from a nearby Starbucks.

Seeing these interactions firsthand made me wonder how Ramirez viewed his relationship with OSU students. “My interactions with students are almost 100 percent positive,” he responded. “I feel safe here.”

He explained that the Columbus Coalition for the Homeless has helped him to stay positive and demonstrate great patience – virtues we could all benefit from.  “Every once in a while you get a bad apple rolling through, but that doesn’t mean I have to feed into the negativity,” Ramirez said. “If someone is negative towards me, I’ll just go to the next person and let them go by and say what they want to say.

“In anger management, they teach us that we are responsible for our own anger and we can choose to be angry or not – I kind of live my life by that motto with my actions.”

Ramirez’s attitude and outlook began to rub off on me. It was refreshing to see someone so positive and in control of his emotions, especially when already dealing with the daily stresses of homelessness.  Feeling inspired by his outlook on life, I asked Ramirez what we, as students, could do to improve our relationship with the homeless community.

“My answer would be to not overlook homeless people. Don’t be afraid to look us in the eyes or stop and say hello,” Ramirez responded.

Ramirez described the problems facing the homeless community and how students can help: “If you want to help, don’t be afraid to offer homeless people something to eat,” he said. “According to statistics, 85 to 90 percent of people that beg for money usually do drugs, or alcohol, or both. Unfortunately, that is how they get into this situation.”

He said a common perception is that giving money to the homeless will feed their addiction, but giving food is always a good alternative to help the less fortunate.

My interview with Ramirez opened my eyes to reality of homelessness.  He gave me a face to identify with, and showed me that contrary to generalizations of the homeless, many in the community work hard to improve their circumstances. I would encourage all students to have a discussion with homeless community members on their campuses. Gaining perspective and understanding is a powerful tool we can all use to combat stereotypes and improve everyday human relationships.