Angie Jones and Ton Do-Ngunyen – both seniors in Tisch – are Beyoncé aficionados (you may recognize Ton from his legendary YouTube Countdown remake) and have a remarkable capacity to retain just about everything going on in popular culture.

During winter break last year, in the middle of a lengthy phone conversation, the pair decided to merge their interests and start a podcast dubbed We Are Chamomile Tea. In a time where daily events continue to leave us speechless, Ton and Angie certainly have a lot to say about love, life, politics and of course, Beyoncé.

Describe your podcast in a couple sentences — what's your pitch for a prospective listener?

T: We advertise it as a podcast about life, love, culture and Beyoncé. Basically, we love to take pop culture and current events and bring them together and talk about how they affect us…There's a whole lot to discuss with what's happening today. I mean, Beyoncé had twins!

Didn't the first episode go out just after they were born?

We talk about social issues that affect us, because we are two people of color and we operate in different spaces that may not get our perspectives at all. But we also like to talk about pop culture because we're both kids and know that other people would enjoy those topics.

It started in January because we were on the phone during winter break, for four or five hours straight, talking about Rihanna's entire discography.

T: The conversation went from Rihanna's discography to the model minority myth, and then into the history of racism against Asian community and the backlash of the civil rights movement.

That's quite a conversation…

T: Yeah we were on the phone for 5 hours just talking about it.

A: It was at the point where my parents would go "Are you on the phone with Ton again?" And then after New Years, I just said – "Why don't we start a podcast?" So we started putting out plans for promoting our first episode this summer. 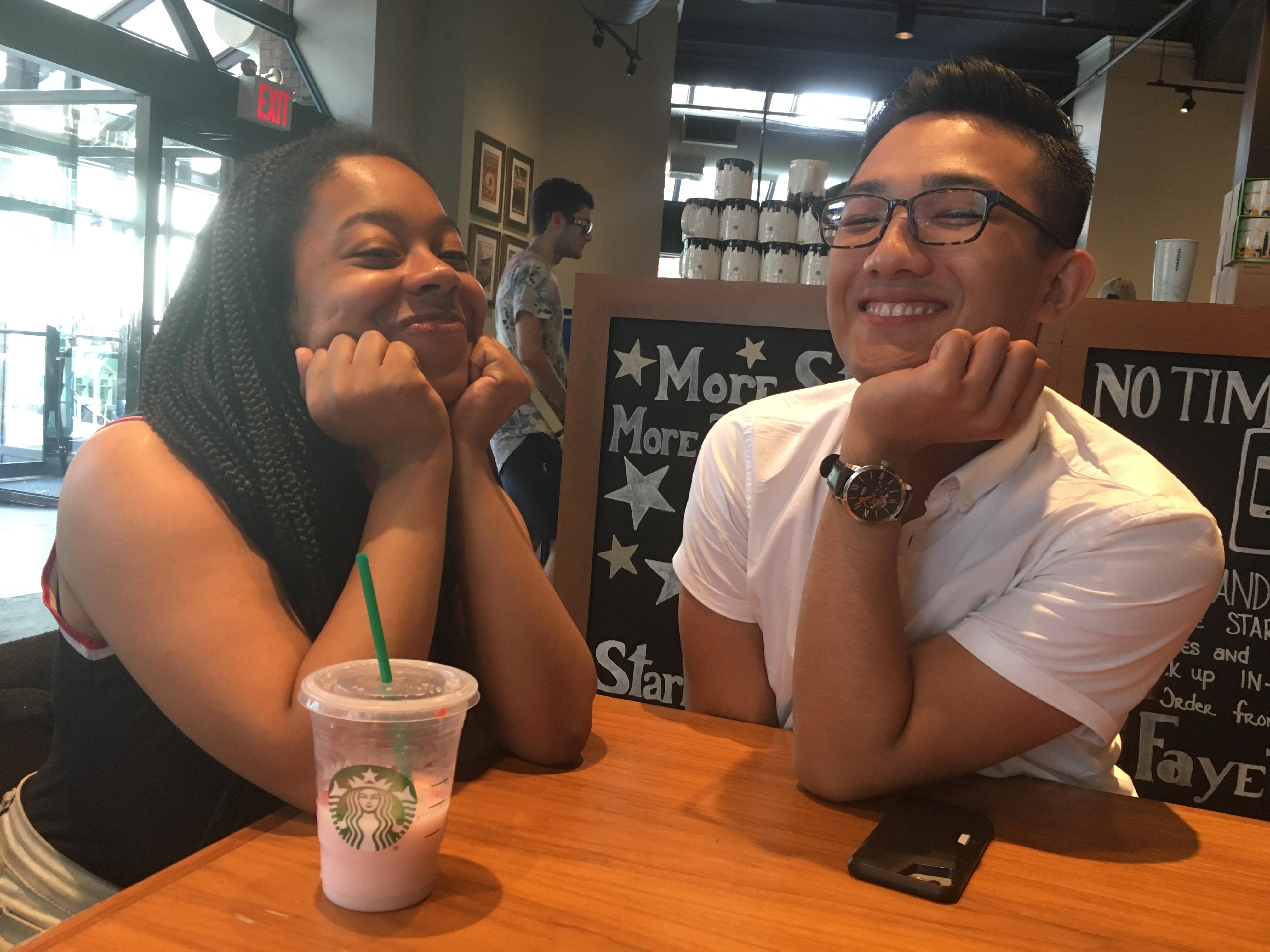 It sounds a bit like the two of you are just having a conversation and then putting it out in the world for everyone to hear.

T: We have very unique perspectives to share. On my end, there is not a lot of conversation going on from an Asian perspective. As a gay Asian man, there is a lot of things in society that affect me that aren't talked about. But also on the other side of that, I just want to talk about Beyoncé and have a good time.

A: It's like an onion, it is filled with layers. That's a Shrek quote – I just love Shrek.

Join us on our discussion of the events in #Charlottesville and the legacy of white supremacy in America, now on SoundCloud.

You did an episode about Charlottesville (called 'Whitelash') and [Angie] discussed that what happened as kind of inevitable. It feels really important to have these kinds of conversations… was the podcast spurred on by the election and this administration?

A: There were a lot of political events before Trump, but Trump was such a major ordeal that people were shocked by it. It did influence us a tiny bit, but it was not the only reason.

T: Personally, I don't think it was necessarily spurred by the election, although that certainly gave us a lot to talk about. But even before the election, these issues have been in place and these perspectives don't really change. We just have a whole lot more to talk about now, because week by week it just gets crazier.

A: We also want to show on the podcast that while social issues are things we talk about, it's not the only thing that we think and talk about.

True, you did a whole episode that was mostly on the VMAs.

T: Yes, sometimes it's just important to have light in our lives… but we also want to take pop culture moments and put them in a greater social context.

In terms of what you talk about each week, do you just go through the week and write down things that happened to talk about, or is a specific topic chosen beforehand?

T: It depends, sometimes we go in knowing what we want to focus on but sometimes we think "this week has been crazy, we need to switch it up," which is what happened with Charlottesville.

A: We had a whole different episode planned before that happened… but we're also still in the green and figuring out our structure.

T: Our joke in meetings is that we are basically in our Rihanna stages before Good Girl Gone Bad… we're in the mixtape days.

big things poppin (up), little things stoppin. ? by @dannijuhl. thank you @maxx_evan for being a real one and making the sophisti-ratchet pop up possible with your table and speakers. thank you to everyone who came out and supported us! (angie would like to point out that she doesn't know how to pose under pressure. we're gucci.) ☕️

Is there a plan to go beyond the podcast and develop Chamomile Tea as a brand?

A: Around the time we were prepping for the first episode, we were creating a promo video and content, and we realized that we were doing all of this stuff that was in line with creating a brand. So we thought, why not expand doing that on top of the podcast.

T: On one side, yes it's a podcast but we're both artists – Angie is a writer and I love to direct and create videos – and everything else is just branching out of what our podcast could be.

Rapid fire questions. First, which is your favorite era of Beyoncé – in every aspect?

T: Self-Titled came out and we thought she'd hit her peak, but she just keeps getting better.

The rest of the questions are excluding Beyoncé. Favorite artist or band right now.

A: I'm going to say – because I love my boys – Harry Styles is doing a really good job right now.

Favorite of all time – not Beyoncé.

A: Because I'm a product of my parents, Michael Jackson.

T: If we're saying the greatest of all time, Michael Jackson. But for me, the person I enjoy the most is Rihanna.

Let's talk about the current administration for a second, if we must. What's a song that helps you get through this time and this government?

A: The new Gorillaz album Humanz – the first track is called Ascension and the hook of the song is 'The sky is falling baby, drop that ass before you crash.' That's the whole feeling I have about this time we're in– the whole world is going to shit but I'm still here and I can shake my ass so I'll be fine.

T: When that election happened, I was listening to A Seat At the Table (by Solange Knowles) and sometimes I just need to wallow in that sadness. So I would listen to Cranes in the Sky.

Finally, where can we get the podcast?

A: You can get it on ITunes, Soundcloud and Stitcher.