Anti-Trump protests have been a constant occurrence in New York for over a year now, and since the inauguration there seem to be practically two per day. But something special is in store for this weekend at Trump Tower.

The “We All Pee On The Trump Tower” event is promising that a “golden shower” of pee will overtake the President’s New York residence on Saturday at 2 p.m., inspired by the fact that “if we can’t pee in our own gender’s bathrooms, we gotta pee on the cheeto palace.”

Public urination is a crime in NYC, but was reduced last year from a criminal misdemeanor to a civil infraction, which can win you a small fine and possibly up to day in jail.

As the day approaches, however, there’s confusion surrounding whether the communal act of peeing is actually going to occur. Although 2,300 people are interested in attending, only 536 have confirmed their presence. The event details also stated, “this event was made as a joke i do not endorse peeing on any building. but i mean, yknow, u do u,” which a co-host felt the need to re-emphasize a few days later.

However, the disclaimer above was followed by a contradictory statement on Friday afternoon.

One attendee tried to outline a plan of action. 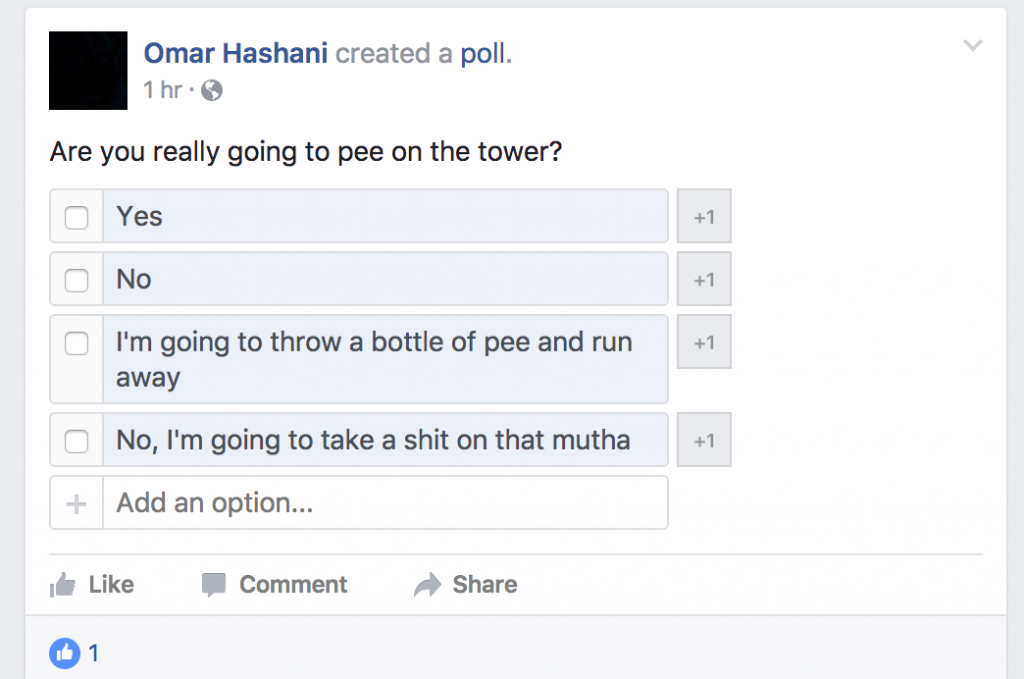 Someone else said this.

Another gentlemen showed solidarity from across the country.

At this point, it’s probably wise to note that Trump Tower is surrounded by security and NYPD 24/7, in addition to Melania and Barron being protected by the Secret Service. Still, aspiring pee-ers won’t be discouraged, with one offering a (probably still illegal) alternative.

And as if the day wasn’t already interesting enough, a peaceful “NY March 4 Trump Rally” is scheduled to overlap the golden shower-goers. The pro-Trump event is encouraging marchers to “wear your USA and Trump gear. Bring your American flags, signs and pride.”

Pro-America marchers and public urination, aka just another weekend in New York.