Update: UMich have condemned the student, saying they are “extremely disappointed” in his behavior. Full story here.

An Uber driver in Ann Arbor has posted a video of a customer abusing him and mocking him for his job.

The driver, Artur Zawada, 50, has told The Tab Michigan that the customer is a student at the University of Michigan, and belongs to a fraternity. He says he has the reported the incident to the police and has had a meeting with the dean of the university about it.

The video opens with the group mockingly jeering the driver, huddled around his window.

The video opens when Zawada declines to pick up a group of customers.

Then one of them launches into a tirade. “They [Uber] don’t give a shit about you. They don’t give two fucks. There are fifty of you, and there is one of me, who spends the most money, you little fuck.”

The rider then called the driver a “little faggot fuck” and a “little piece of shit”. He then says “You’re an Uber driver, go fucking drive you little fuck. Minimum wage faggot. Go fuck yourself.”

As he walks away, he turns to the driver again and says “While you’re working all day, guess what? I’m going to sit on my ass and watch TV. Fuck you.”

Zawada told The Tab this morning that he knew the customer from previous trips, and had told him he couldn’t ride with him again after several bad experiences.

He said: “I already told him I would never take him again. He knew that but he didn’t cancel the trip.

“I pulled in I didn’t even say anything to the guy, and that happened. So I pulled out my cell phone and recorded him. He should just have cancelled before I came over. They were looking for trouble. They were hoping I would lose my cool.” 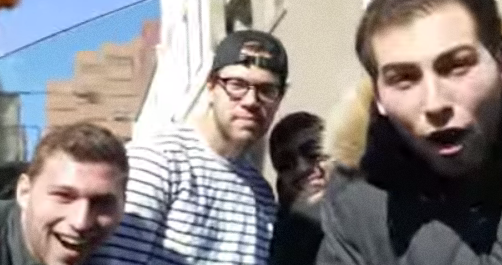 Zawada, who is Polish and has lived in the US for 30 years, had a meeting with the dean of the university. “In the meeting she said the people in the video are students at the University of Michigan,” he told The Tab.

The driver has shown the video to students, who have told him that the group are members of a fraternity at UMich. The Tab has reached out to the fraternity, and the student in question, for comment.

Zawada said: “I have lived in this country for 30 years. To see someone have complete disregard for another human being – to be abused just because they overloaded the car or they are mean or rude, I have to put a stop for it. I was shocked. I was just in disbelief.”

He said it was the first time he has encountered that kind of reaction from a customer. “I have taken 2600 rides – most of the time, things are fine,” he said. “You cannot strip people of their dignity. This is my job, this is what I do.”

The university press office was not available for comment.