An ode to Cedar Village

Ask anyone where the best parties, post-game celebrations or burning couches are at— they will point you here

The apartment buildings rise stately above the banks of the Red Cedar River, the warm glow of Saturday afternoon sunshine gleaming off their pale brick façades. Wafts of music and conversation that fill the air are carried downwind by the gentle breeze. Green and white-clad Michigan State students mull about, mixing and mingling and cracking beers.

It’s game day, and you’re in none other than Cedar Village.

Cedar Village is steeped in a complex history that involves MSU’s success in both football and basketball, an intense level of school spirit, an atmosphere highly conducive to a mob mentality, a generally casual attitude toward arson and a decent amount of drunkenness.

Ask any MSU student where the best parties, post-game celebrations or burning couches are at, and they will point you here. After a big Spartan victory—or loss—one can expect the streets of this apartment complex to echo with the roar of fans and partygoers by the hundreds, and this pavement to once again be marked with the charred outlines of chairs and couches, burnt to a coal-black crisp.

Thanks to word of mouth and a decent amount of media coverage over the years, many know that Cedar Village has long been a hotspot for wild post-game celebrations, riots, and disturbances. What many might not know is how this time-honored tradition came to be.

In the 1970s and 80s, MSU students began a tradition of hosting large gatherings in the Cedar Village area. On the third Saturday of every May and October, students would come from all over campus to meet up and party with their fellow Spartans, dubbing their block party, “Cedar Fest.”

“Beneath the pines we’ll gather…”

The first official Cedar Fest in October 1983 was attended by about a thousand people. As the years went on, attendees ranging in the hundreds to the thousands congregated outside the apartment complex for the semi-annual event. The number of arrests and injuries reported at these events continued to grow as the tradition seemed to shift farther away from its peaceful origins.

Eventually, in the fall of 1987, East Lansing decided the event had escalated too far. Cedar Fest was officially banned, and the city had an injunctive order to show for it.

After that, Cedar Village was relatively quiet for a few years.

After Michigan State’s football team lost to Michigan in October 1989, mayhem and fires broke out once again in Cedar Village. Furniture, bicycles and a moped were set ablaze as thousands of rioters turned loose on the streets.

Smaller gatherings and riots took place throughout the next several years, but the action at Cedar Village has picked up intensity over the past 10 years with Michigan State’s great success in football and basketball. A notable celebration came in 2013, when MSU’s victory in the Big 10 football championship resulted in a swarm of fans rushing to the apartment complex. Couches were burned, street signs and trees were ripped out of the ground, and glass bottles flew everywhere. Riot police from the ELPD deployed tear gas, and after a few hours the crowd eventually dispersed.

In response to not-so-subtle warnings from the university about participating in riots, Spartans have more recently tried out new ways to celebrate sporting victories. Bagels made their debut in March 2015. This was of course when we all learned that yes, you can get arrested for throwing a bakery item into a crowd.

Guys, what's with the bagels?

Large-scale snowball fights have also broken out when weather conditions are right— after our glorious victory over Ohio State in November, for example.

All of this goes to show that despite numerous attempts over the years to extinguish Cedar Fest permanently, the block party’s legacy has survived and continues to evolve.

Today, Cedar Village has a reputation for being the place where, quite frankly, all of the weird shit happens.

I can attest to this personally. Living on the outskirts of CV has allowed me to experience a fair share of the chaos myself, and at this point my roommate and I could probably write a medium-length novel with all of the bizarre/disgusting/hilarious/amazing adventures and situations we’ve found ourselves in during these past five months.

Screeching bat dive-bombing us in our own hallway? Yep, that happened.

Furniture bonfires? You bet. A couch was sacrificed to the Cedar Village gods right outside my bedroom window not too long ago.

Horrifying morning-after discoveries? Plenty. I will not soon forget how long after Halloween we were forced to use our apartment’s rear entrance because the front stairwell was absolutely covered in puke. #ForeverUnclean

Huge food fights in front of riot cops? Sure thing. Those bagels you stole from Snyphi have finally found their purpose.

Literally one moment of quiet on a weekend night?…Go fish. 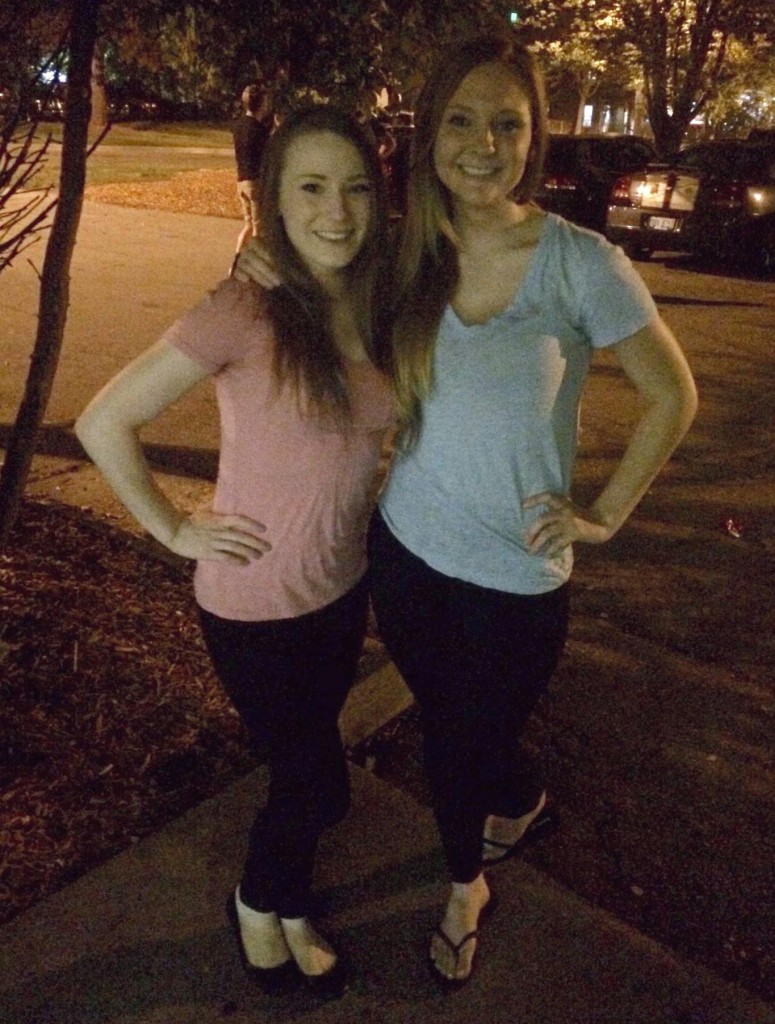 Crazy evenings in CV are best spent with a partner in crime. Conveniently, Kaitlyn is my roommate too

I will be the first to admit that these celebrations get out of hand quickly. I have nothing but admiration for the ELPD because honestly, the Cedar Village crowd can be incredibly hard to tame once excitement sweeps through the area. Police officers constantly walk a thin line between maintaining control of the area and preserving trust with students by not acting with too much force, too fast. 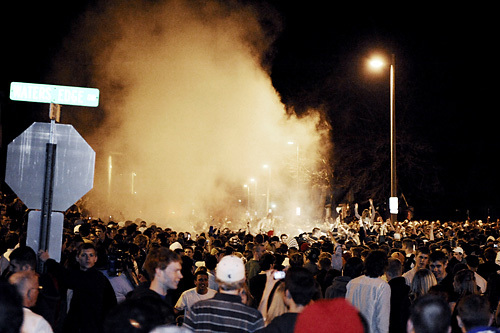 So don’t get me wrong, the culture here is one of revelry at all costs, whenever humanly possible. But it’s also one of incredible community and togetherness. Add in the proximity to the Red Cedar, Grand River and campus and it feels like home, if you ask me.

Cedar Village has reliably been the place where the action happens for more than 30 years at MSU. No matter your opinion on the post-game antics that unfold here, we can all agree that the apartment complex has become an iconic part of Michigan State’s legacy. It constitutes a true community of Spartans living on the very front lines of the college experience.

In the wise, relevant words of Kanye West:

So, my dear Spartans, keep doin’ you. Never stop building character and celebrating together. Think twice before you douse your sofa in lighter fluid, but continue to rally and revel in that one-of-a-kind Spartan unity we all love so much.

Our school spirit is unmatched. Cedar Village is our proof.