On Tuesday, I joined the Ghost Walk of Bloomington and walked through the spookiest parts of Indiana University's campus.

We heard stories that sent chills down my spine and discovered haunted hangouts that made me think twice about studying at the IMU.

Read on only if you dare.

Owen Hall used to be home to the department of natural sciences where many students visited dead bodies and took them apart. There were so many cadavers in Owen Hall that there was even a dumbwaiter to lift these bodies up multiple levels. But, occasionally, some limbs would be cut off accidentally. Fun and flirty, right? 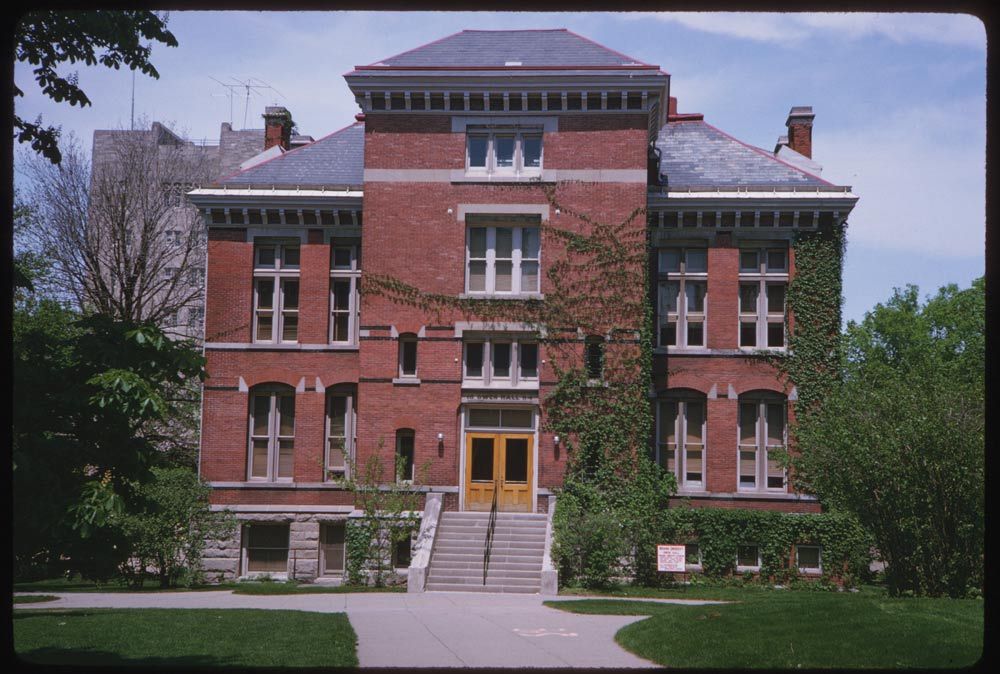 So many arms have been cut off that Owen Hall has been rumored to be haunted for years. People reported cold spots and floating objects. However, nothing was confirmed until the early 20th century when a young girl was terrorized in Owen Hall.

This particular nursing student wasn't liked by her peers. They thought she was stuck up and wanted to scare her. One night, they stole a cadaver arm that had been severed and took it back to the girl's room. They tied the arm to a lamp and waited and hid until she came back.

Finally, the girl went back to her room and closed the door. The tricksters waited for a scream or anything that would indicate she had seen the arm, but many minutes passed and they heard nothing. They opened the doors and found the girl sitting on the floor devouring the arm. They hadn't scared her, they have driven her to insanity.

Fourth Street intersection and the woman in black

Everyone on campus has heard of the woman in black, but have you actually seen her? She wanders the streets of Bloomington at night, near the famous Bloomington restaurants like Buffa Louie's. She might just follow you for a few blocks before she disappears into the night.

It's unclear who this mystery woman is, but many students have tried to catch her. Young hoosiers followed her around corners and into alleys, only to have her disappear the minute she decides you shouldn't see her anymore.

A few students have even been malicious towards the woman, but the woman simply disappears. Dodging any baseballs or fists that might wish her ill-will. This apparition is believed to be related to the Dunn Cemetery because she has also been spotted here on occasion.

Every cemetery has stories of ghostly encounters. Whether you hold your breath while passing them in your car or you took pictures in the middle of them when you were in middle school, there is just something creepy crawly about having someone's dead body six feet below your own. 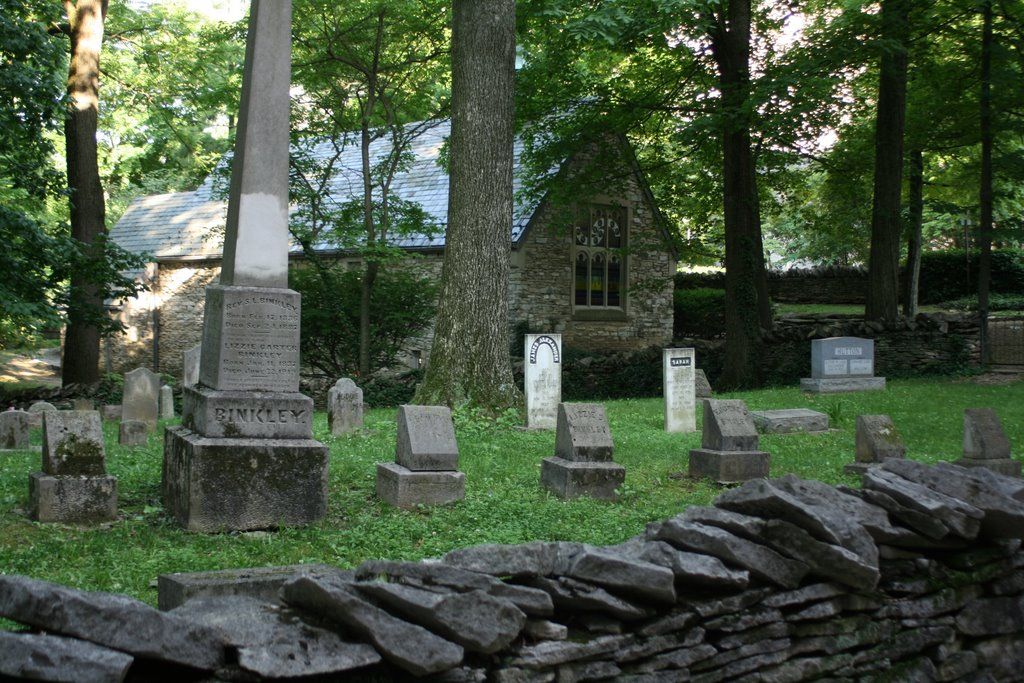 The cemetery that seems completely out of place next to the IMU is home to the Dunn Family and is almost 200 years old. The Dunns were a prominent family in Bloomington in the mid 1800's. They owned a large farm that was once smack dab in the middle of campus. Samuel Dunn made an agreement with IU that the school could expand as much as it needed to, as long as the cemetery remained in the same place so the family could stay together "until they rise together again."

Okay, I don't know about you, but I'm never walking there alone at night.

Already a pretty primal spot for hocus pocus, this cemetery has been a hotspot for ghost hunters and paranormal activity seekers for years. In fact, during the ghost walk a few years ago, a ghost hunter even caught site of an apparition. During the witching hour (12 midnight for commoners) the lady in black can be seen going from grave to grave tending to the fallen soldiers.

The lady in black is believed to be a member of the Dunn family named Agnes who tended to soldiers during the civil war. There have also been pictures taken of people coming out of the graves and shadows of figures when no one is around.

Ever been up the elevators in the tower and had it randomly stop on the fourth floor? Turns out, it's not just bad maintenance — that's a ghost.

Many years ago, the tower was part of the Biddle hotel inside the Union that housed strangers from all over the United States. A couple decided to stay on the fourth floor and soon got into a very nasty fight that ended in suicide. It is believed that their spirits still haunt the tower, particularly in Bryan Hall. This ghost is reported to be happy and cheerful. Certainly not malicious, but the maintenance workers have certainly been spooked quite a bit.

One summer, a maintenance worker was shutting down the north end of the building and making sure every light had been turned off and every door had been closed. But when he turned around to start the south end of the building, a huge gush of air almost knocked him off of his feet. As if he wasn't freaked out already, the worker saw his reflection in the window, but wasn't alone. A shadowy figure is loomed over his shoulder.

Totally freaked out, the maintenance worker turned around but saw nothing, but heard a soft voice that sounded like chanting. Before he could investigate further (or pee his pants out of fear) the worker's walkie talkie buzzed, giving him the opportunity to bolt. Moral of the story, do not be a maintenance worker in the dead of summer.

Many students have also reported seeing a ghost dog. But at least it's a dog, right?

Perhaps you have eaten here with your parents for a fancy dinner or attended a banquet in this room. Whether you entered the Tudor room or just caught whiffs of the delicious buffet being served to the elite on your way to Starbucks, you probably didn't know about the mischief within its walls.

If you have been to the Tudor Room, you probably noticed the antiqued decorations in the room, including a picture of a young boy with a jack-o-lantern. Very little is known about the subject in this picture except that his name is Jacob and he died in a fire a few years after the portrait was painted.

The room has been known to have suspicious happenings all right around where Jacob's picture is housed. At night, Jacob likes to mess up dining arrangements and knock over chairs. Nothing too messy, just a sort of "boys being boys" situation. However, when anything goes array, Jacob will rampage the Tudor Room and knock over tables and cause lots of havoc. Although he is certainly not malevolent, he is only happy when things are going his way.

While the auditorium was being built there were so many workers that many accidents occurred and unfortunately, one of these accidents resulted in a man's death. This man fell from the banisters and left a crater and a pool of blood in his wake. This bloodstain has never gone away. In fact, the floors have been replaced twice and yet the bloodstain prevails. It seeps through the wood and reappears days after the new floor is in place. So, the Auditorium is forced to just throw a rug over it and call it a day. There is also rumors of ghosts that will flick off lights three feet in front of your face and taunt you. They are much more impatient than the ghosts in the IMU and want you to pay attention to them.

Every Halloween at 10pm, a group of friends would gather by the arboretum have a grand ole time being together and enjoying their friendship.

Senior year, like any normal group of friends, the decided to have a seance. The problem is that when you call out to ghosts, sometimes they'll actually answer. The candles blew out with a huge gush of wind and the group was totally bewildered. When they turned around, they saw a dark and shadowy figure standing there staring at them. "Get off my home!" the figure screamed, and the group of friends ran home. 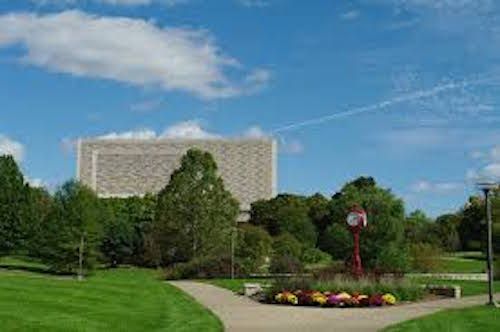 However, the next day they decided to go back and check out the spot where they had been. The candles and all other materials were gone. In it's place was a pile of ash. So, naturally, the group of friends never spoke of this again except to tell the department of Folklore about what they saw.

The Ghost Walk is held on an annual basis and consists of many different stories and food. If you are interested in learning more about the spooky spirits mentioned, visit the Department of Folklore at 800 E 3rd Street to view their archives.