PSA to The Odyssey: Feminism isn’t about hating men

I recently read an article published in the Odyssey titled “I Am a Female and I Am So Over Feminists.” 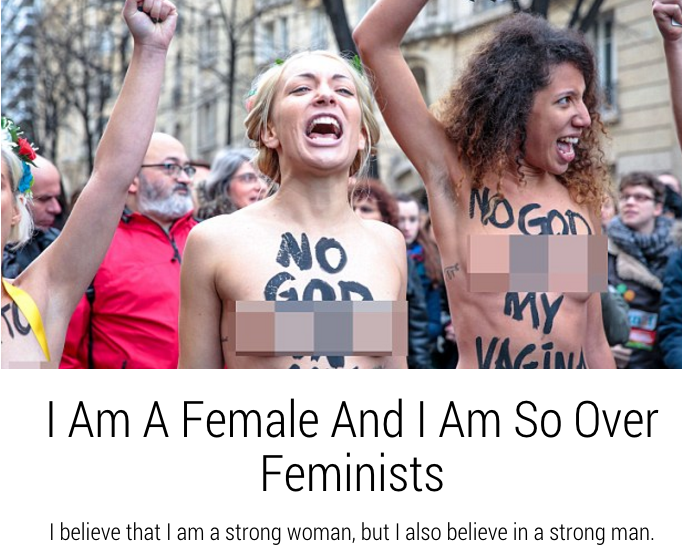 First off, let me make an incredibly important point here: you do not have to identify as being a woman to be a feminist.

To restate that point: men can also be feminists.

And if I was not clear enough already: every single human being can and should identify as a feminist.

And why can every single human being be a feminist regardless of their desired gender identification?

Let’s look at the definition of feminism for the answer to that:

Feminism (n): the theory of the political, economic, and social equality of the sexes.

There are not enough font alterations I can use to emphasize those last four words.

To recap: being a feminist just means that you want every human being to be treated in the same, fair manner and to receive equal rights regarding his/her/their presence in the political, economic and social systems.

Now, let’s review a few quotes from the article (I wish I was able to use the clever journalistic strategy of taking these out of context, but they really are what they seem): 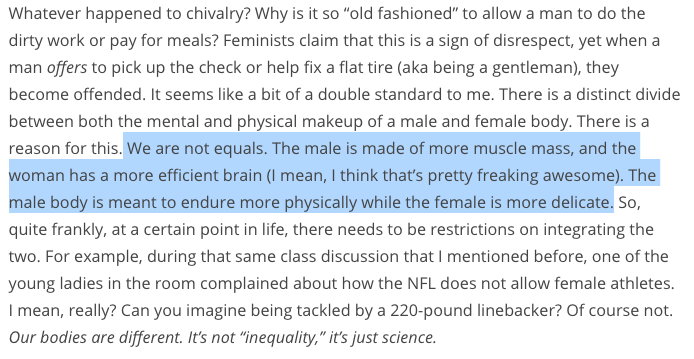 A real paragraph from the article

“We are not equals. The male is made of more muscle mass, and the woman has a more efficient brain (I mean, I think that’s pretty freaking awesome). The male body is meant to endure more physically while the female is more delicate.”

“So, let’s stop blaming men and society about how we continue to “struggle” and praise the female gender for working hard to make a mark on today’s workforce. We’re doing a kick-ass job, let’s stop the complaining.”

“I consider myself to be a very strong and independent female. But that doesn’t mean that I feel the need to put down the opposite gender for every problem I endure. Not everything is a man’s fault. Let’s be realistic ladies, just as much as they are boneheads from time to time, we have the tendency to be a real pain in the tush.”

“We don’t have to pretend we don’t need our men every once in a while. It’s OK to be vulnerable.”

I am glad this author considers herself to be a strong and independent woman; however, the government, the economy, and the social powers at play do not consider all women to be strong and independent. The author herself perfectly illustrates this concept with emphasizing the (very incorrect) idea that women are soft, gentle, delicate, in need of being taken care of and men are strong, powerful, and ready to sweep us off our feet.

It is not a matter of men being “boneheads,” and women being a “pain in the tush,” that perpetuates inequalities such as the wage gap, the fact that women do not hold a proportionate amount of positions in power, an absence of women in the roll call of American presidents, or the fact that rape culture extends into every aspect of our lives from television shows to advertising. Blurred Lines. Baby, It’s Cold Outside. This interview with an assault victim. The Slut Walk that attempts to reclaim a word that only women (not men) are called. Tell me the last time a man was told not to “dress that way,” before he went out to a party.

So let’s stop making excuses for the fact that all of this happens yet we focus on the fact that a few women are angry about it. Every movement has radicals and radicals do not represent the masses. Yes, a few radicals feminists have expressed anger and hatred towards men and the patriarchy. No, we do not all feel this way. No, as a self-proclaimed feminist, I do not hate men. And I cannot use my eighteen years of experiences to speak for (or against) the entire feminist movement. I cannot condone this author’s use of her view of men as “boneheads,” (What is this claim even based on? I know plenty of men who I would never refer to as “bone-heads,”) to defend the idea that being a feminist is going overboard.

And that is not something we should just “relax” about.