If you ask any UF student what they miss about home, there is a 100% chance they will mention food. Although UF tries very hard with Gator Dining and the Fresh Food Company, there’s something about both those places that vaguely remind us of a slightly nicer high school cafeteria. Luckily for those who want to skip out on ‘tofu-potato hash’ and other concoctions being passed off as food, Gainesville is a mecca of local restaurants, waiting to be enjoyed by ACRs and UF students alike.

Enter the man, the myth, the legend: Ken Eats Gainesville.

A Gainesville resident of eleven years now, Ken Peng is the man who has tried it all– “the good, the bad, the inedible.” In a city where there’s a place to eat at almost every corner, it’s easy to get lost in all the options.

In his blog, Ken Eats Gainesville, Peng exposes these restaurants writing raw, unfiltered reviews that spares no one’s feelings, making his blog stand out from those that are biased. Although his mission is to promote local food businesses, Peng maintains his integrity by writing nothing but the truth, especially when it comes to the bad restaurants.

Since the start of his blog, he has amassed a following of Gainesville foodies, with over 16k likes on his Facebook page.

The Tab got the chance to sit down with Peng to discuss Ken Eats Gainesville and the Gainesville food scene. 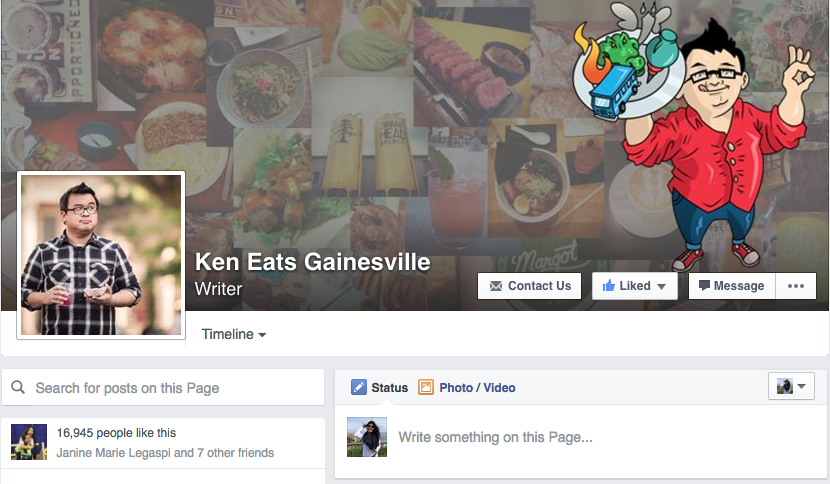 So, tell us how you got into food blogging. How long have you been doing it for? Was there a certain point when you realized your blog was successful?
It was serendipitous I suppose. I wrote a column for the Alligator called “Ken Eats Gainesville” for a semester back in 2005, but I stopped. In 2013, I was in between jobs and looking for something to do while I was job searching, so at the urging of a friend, I started the blog on Facebook.

I grew up around the business, my father owns an Asian grocery and distribution company, so there was always that love of food and the industry. I think I realized the gravity of what I was doing when I started getting approached by people when I was out and about. 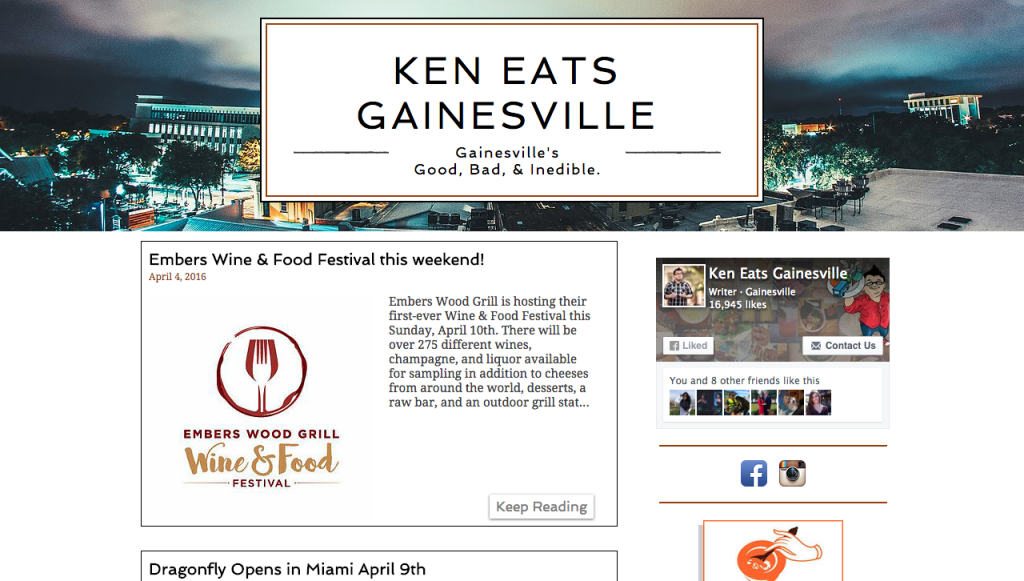 Do you have a certain procedure you follow when you go to a new place to try their food? Is there anything you look for in particular when trying something out?
I usually try to go with at least one other person so I can get a chance to sample more of the menu. I’m fat, but not fat enough to gorge on it all on my own. Depending on what my experience is, I try to go at least another time before writing about it. I look for menus that set themselves apart and try to get an overall feel for the restaurant as a whole, everything from signage to service to décor. Being Cantonese, my palate automatically prefers dishes that are balanced rather than too strong in one particular flavor. I like to taste all of the ingredients, not let one thing drown out everything else in the dish.

How has the Gainesville food scene changed since you started your blog?
I like to think it has made positive strides. Whether by coincidence or not, I think we’re seeing more and more quality restaurants opening up. I don’t think I am the direct cause of it, but I like to think I am a contributor. I think there was a lack of accountability prior to my blog gaining popularity, people could get away with a complacent product and get away with it because they were a local establishment.

I also think that people are seeing the value and interest in food publications so we’re seeing some other food-related media popping up. OutintheVille, Gainesville Grub, Gainesville Vegans, and even the Gainesville Sun relaunched their food reviews after the success of my blog. It’s all a very good thing. Yelp is even trying to expand their presence here with a dedicated Gainesville brand ambassador.

I noticed that you’re from South Florida, specifically the Broward County area. Is there anything from home that you can’t really find here in Gainesville? Is there anything you would consider vital to the food scene but haven’t found yet?
Oh man…good quality Latin food. I’m talking Cuban Fritas, empanadas, arepas, pastelitos, hell even good Cuban bread. There’s places that do that here, but anyone from South Florida will tell you it’s not close to the real deal. I think it’s surprising that given the amount of South Florida transplants here, we don’t have more of a Latin presence. It got so dire that people were genuinely excited to get a Pollo Tropical.

Is it vital? No, but I’d like to see a good Colombian restaurant, a legit Cuban place, and maybe a Fritanga. One of my favorite things to do in Miami is wander into a fritanga in Sweetwater and just get a mountain of carne asada and queso frito for like $5. As far as other things I’d like to see here, maybe a nice French restaurant, a true high-end steakhouse that ages their steaks, and a German restaurant.

Since a good amount of your readers are broke college students, what would you say is the best place to eat in terms of food quality and price?
It’s hard for me to give one place in particular. I think in general, cost of living in Gainesville is not very high, especially compared to some of the big cities in Florida. For the most part, you can have a good meal here for under $15. Just in the midtown and downtown areas, I think you can have some tasty food at places like Bistro 1245, The Spot, Faith Vietnamese, Burgerque, The Top, Crane Ramen, and Reggae Shack for that price range.