I went on a teatox and this is what happened

I don’t know if you’ve been keeping up with social media, but a new craze has hit the stands. Teatoxes.

You might have seen your favorite Instagram model or celebrity posing with their teatox set, their supposed secret to a flat belly. Each set consists of a morning tea and a night tea. The morning tea claims to give you energy as well as curb your appetite whereas the night tea is supposed to cleanse your colon. I guess that’s where the detoxification comes from. 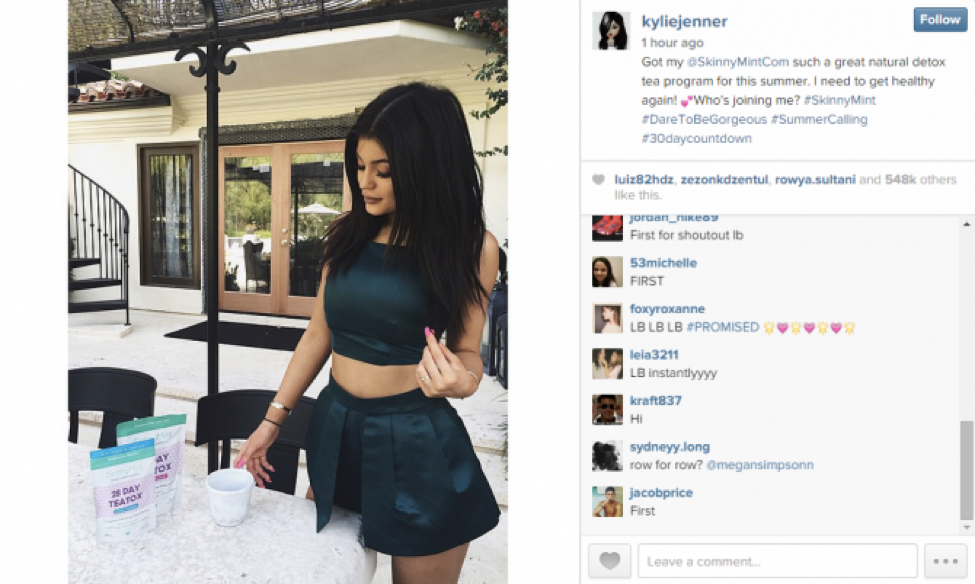 Being the impressionable, young, college student that I am, I was intrigued by Kylie Jenner’s post about her Skinnymint teatox.

I mean, who doesn’t want Kylie’s flat stomach? I definitely do. Especially because being in college has given me an excuse to eat bad food like there is no tomorrow. So I gave in and bought the 14 day Skinnymint teatox for $30. This better be worth it. I’m not the biggest tea fan but I will sacrifice for a flat stomach. Am I right ladies?

I wake up with so much optimism. Who wouldn’t be excited to detoxify their body, right? Especially when you get to drink out of cute mug, like my cow mug from Switzerland. 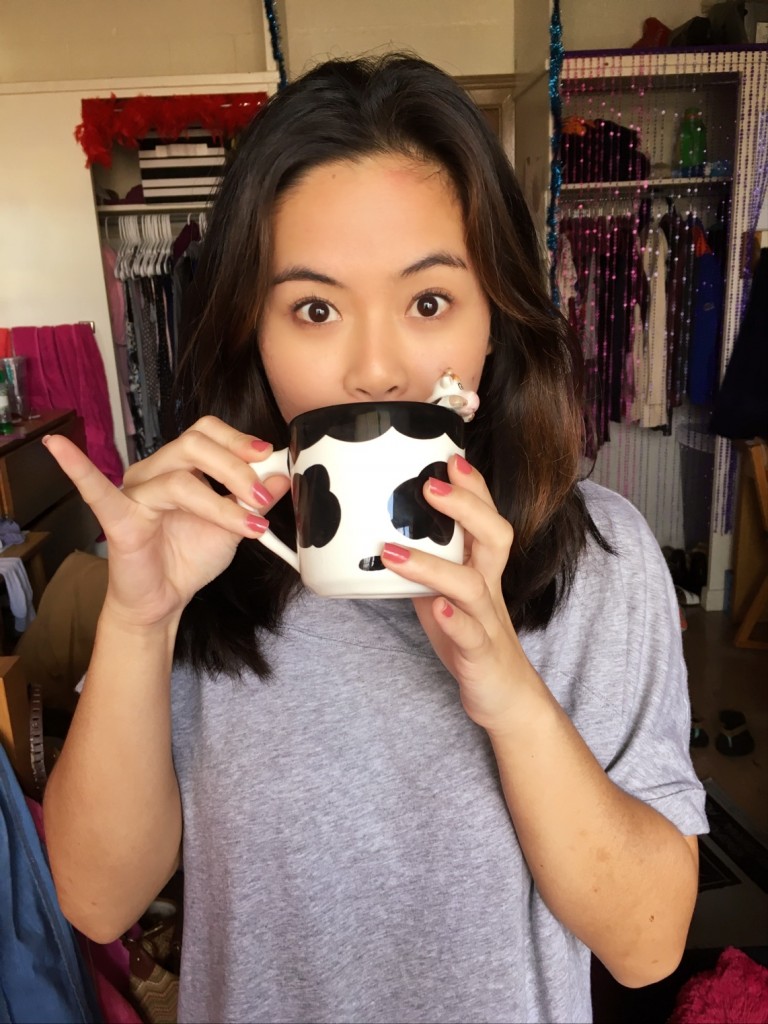 I prepare my morning tea. To be honest, I did not like the first sip. Since I’m not the biggest tea fan, it just tasted like grass and herbs with a hint of unsweet fruit. I admit, I chugged the rest to try and block out the taste. I ended up gagging on the last chug.

The morning tea claims to have caffeine in it but throughout the day, I didn’t notice anything different with my energy. What I did notice was that I was a lot more irritable than usual and my poor boyfriend became my punching bag.

I am dreading the night tea. I’m terrified about the infamous bathroom runs. Prior to starting the teatox, I once read a girl pooped 4 times in one day! That may be normal to some people but for me, that sounds insane. The night tea consists of senna leaf, which is a gentle laxative . The night tea doesn’t taste as bad because I added honey in it. I can feel a spicy sensation in my throat after every sip. That’s probably from the ginger. I didn’t poop yet and I’m not really getting the urge to go.

I slept horribly last night. I had to pee multiple times. It came to the point where I just held it in… Which is really bad, I know. Living in a dorm with one communal bathroom for 20+ girls, a simple bathroom trip becomes what feels like a 4,300-mile trek through the Andes Mountains.

I woke up and had the longest pee of my life. I felt so much relief afterwards. My breakfast this morning consists of mini pancakes and the morning tea. I decide to add honey this time to make it somewhat enjoyable to drink.

Throughout the day, I kept a bathroom count. I went to the bathroom 9 times and that was just to pee. I kept getting insanely painful stomach cramps that would last for a minute or two. The child’s pose became my best friend today. This may be TMI but I pooped three times today. Now I don’t have normal bowel movements so this is a huge deal to me. 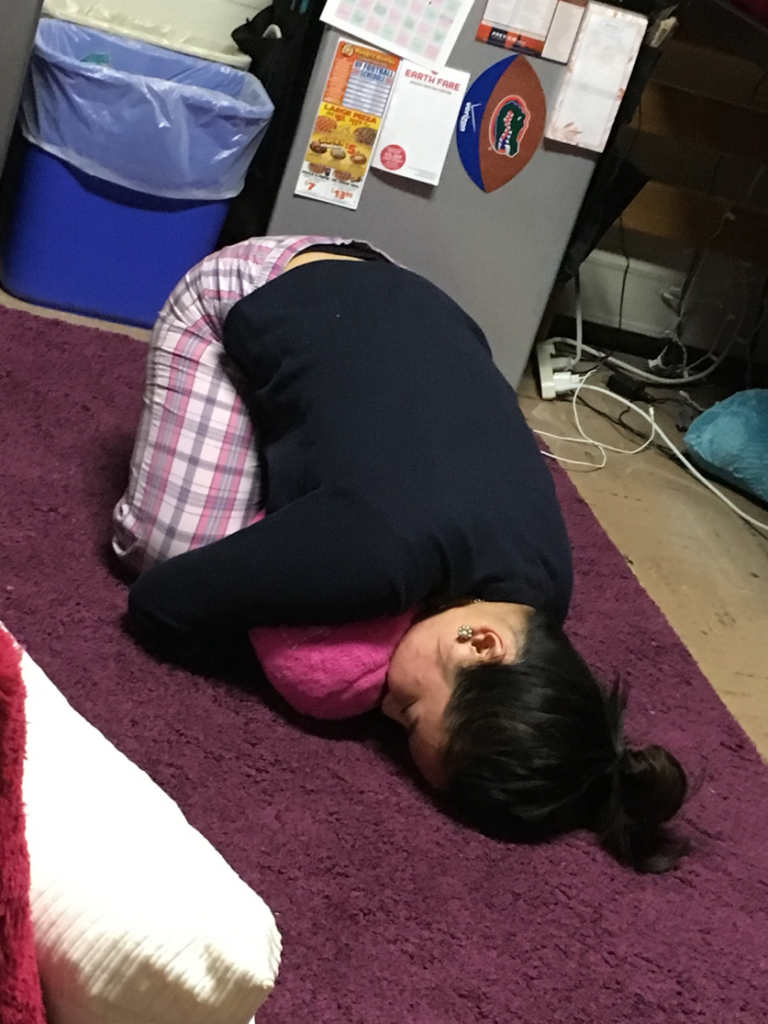 I don’t have to drink the night tea tonight. Thank goodness. Skinnymint says to only drink it every other night because it does contain a laxative.

I didn’t go to the bathroom a lot today so I’ve come to the conclusion it was the night tea that made me go to the bathroom more than a reasonable amount. The weird thing is I am getting bloated. That’s the opposite of what it’s supposed to do so that’s disheartening. I just want a flat stomach. Is that too much to ask?

While I’m making my night tea, I know tomorrow is going to be rough. Especially because it’s a school day. I contemplate just reserving the bathroom in each lecture hall but then I realized that that idea is probably not possible… and a tad bit absurd.

I feel so bad for the people around me. My farts have taken the turn for the worse. The random stomach cramps from needing to poop are much more frequent now.

Here is a poop story for you. I’ve had the urge to go to the bathroom the whole day and I wanted to wait until I got back to my dorm. When I finally got back, the urge multiplied. I ran to the bathroom and rejoiced because there was no one in it. That’s when I knew the poop fairies were on my side. I choose my usual stall and got comfortable. Right as I was about to do my business, at least four girls came in. Little did they know, they came in at the wrong time. It was bad. They had no choice but to use the stalls next to me because the toilets on the other side we’re under maintenance. Whoops. Sorry girls. This is what happens when you’ll do anything for a beach body.

However, the beauty about this teatox is you’re basically free to eat whatever you want. Well, not really. You’re encouraged to eat healthy but you’re not limited to vegetables and fruits. I decided to have some Chipotle for lunch today. Not even E. coli warnings can stop Chipotle from being bae. The beans are probably not going to help with my gas. Oh well. 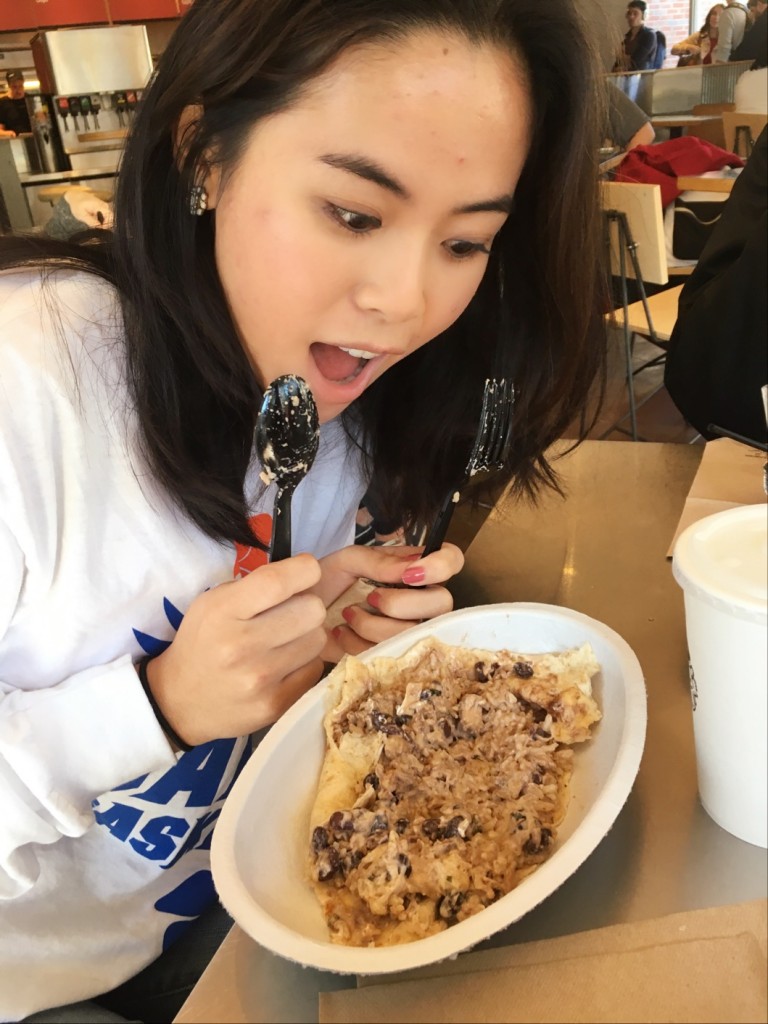 This teatox is giving my life some structure. I finally have a routine down and having a system of waking up early and having some time to myself is nice. Also, it forces me to actually eat breakfast because I like paring the tea with something that will fill me up.

It’s Day 5 and I’m still chugging. I still don’t like tea. I thought by this time I would become one of those girls who can turn a picture of themselves drinking tea into an Instagram-worthy photo. Sadly, I was mistaken. 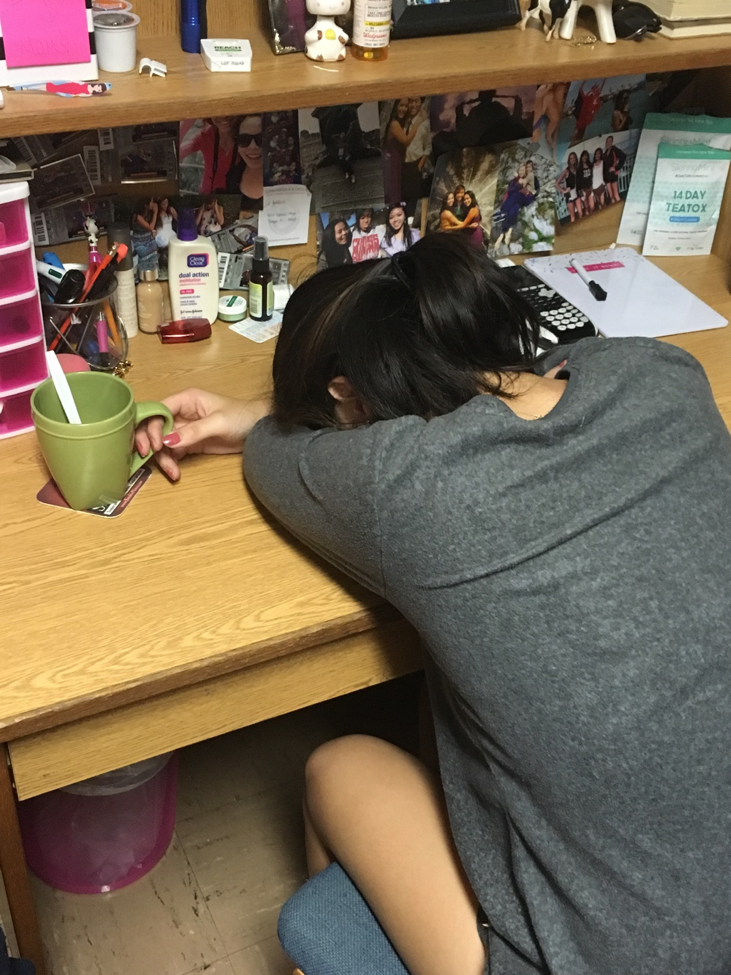 I’m getting used to my million trips to the bathroom. I still despise the random stomach cramps. They attack at the worst times. I feel like pooping is the only way this teatox can actually give someone a flatter belly. What’s going to happen when I finish? I guess this is how teatox companies make money. They make their customers dependent on the laxative so they just keep buying and buying. You tricky companies, you.

Home stretch. It’s almost over. This morning, I notice my stomach is a lot flatter than it usually is. I’m actually pretty impressed. All the bloating went away. I feel like a new woman! Where are my angel wings, Victoria’s Secret?

Although, I’m not very impressed that all my farts and poops stink really bad. It has come to the point where I get really embarrassed to go to the bathroom because all the girls on my floor are going to know it’s me. When I poop, I try to go as fast as I can and flush it goodbye. The slightest fart is so deadly. I sincerely apologize to my roommate, boyfriend, and whoever had the unfortunate circumstance to smell my farts.

Well today is the last day and I decide to celebrate with some soda. Yes, it is counterproductive, but I cut out soda during this teatox in an attempt to be healthier while detoxifying my body. 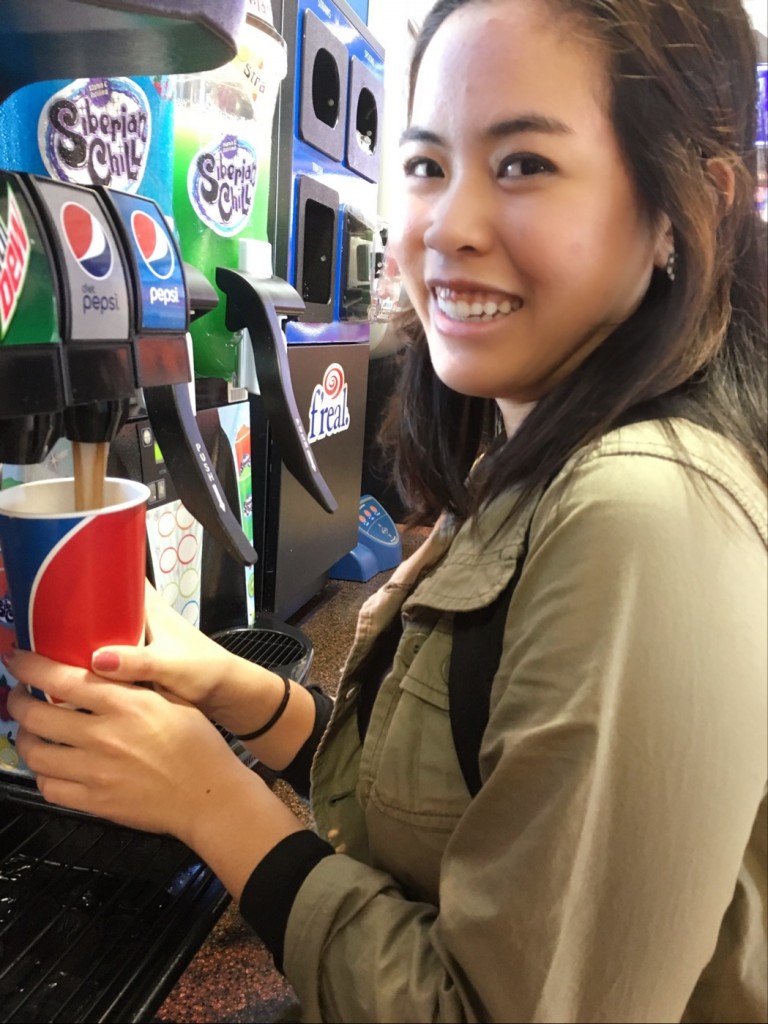 It’s the last day and I expected to at least become a tea enthusiast. I did not achieve that goal. Since I can’t really measure the toxicity of my body, I’m not exactly sure if I’m actually detoxified now. Even though my belly is actually flatter, it’s going to go away after I get off of this teatox. All I really got out of this was a lot of trips to the bathroom, painful stomach cramps, and smelly farts and poop.

I don’t recommend it. It did gave me a flatter stomach but it’s not permanent. Unless you’re looking for a quick fix that will make all of your bodily functions smell putrid, I say just stick to working out and eating healthy.