BREAKING: Everything happening at the Milo Yiannopoulos talk at Emory

The long awaited talk by controversial journalist Milo Yiannopoulos has begun at Emory.

There were warnings of protests and a walk-out ahead of the event, with attendees being told to be cautious on arrival.

Eight to ten protesters have arrived on the scene holding banners, saying: 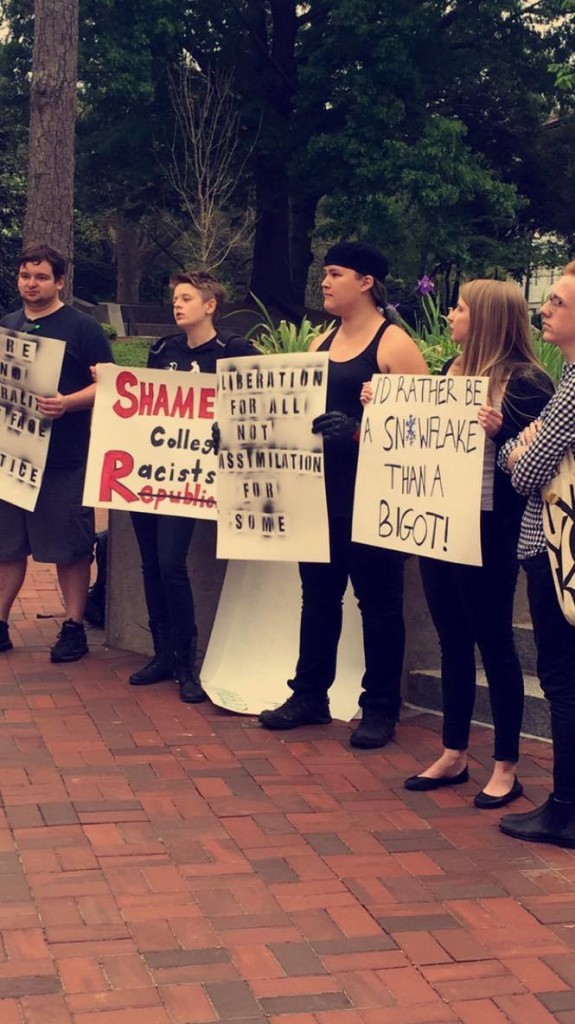 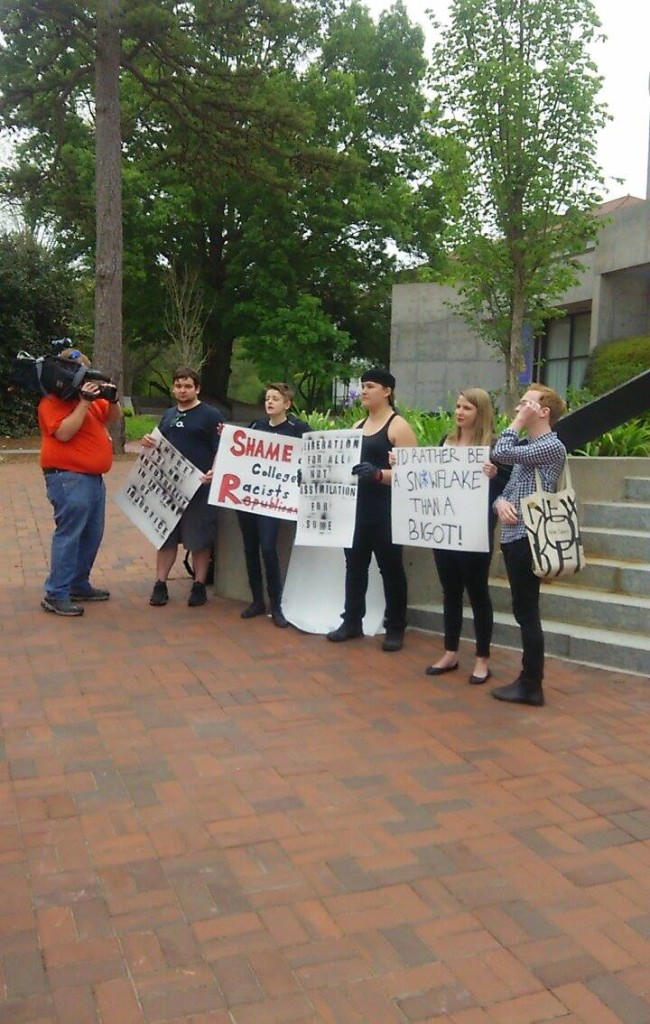 Protesters are continuing to gather.

One said: “I’m not here for Milo…his brand and his hatred are not something I support”.

Another said: “I’ve read everything he’s written for the past 6 months”. 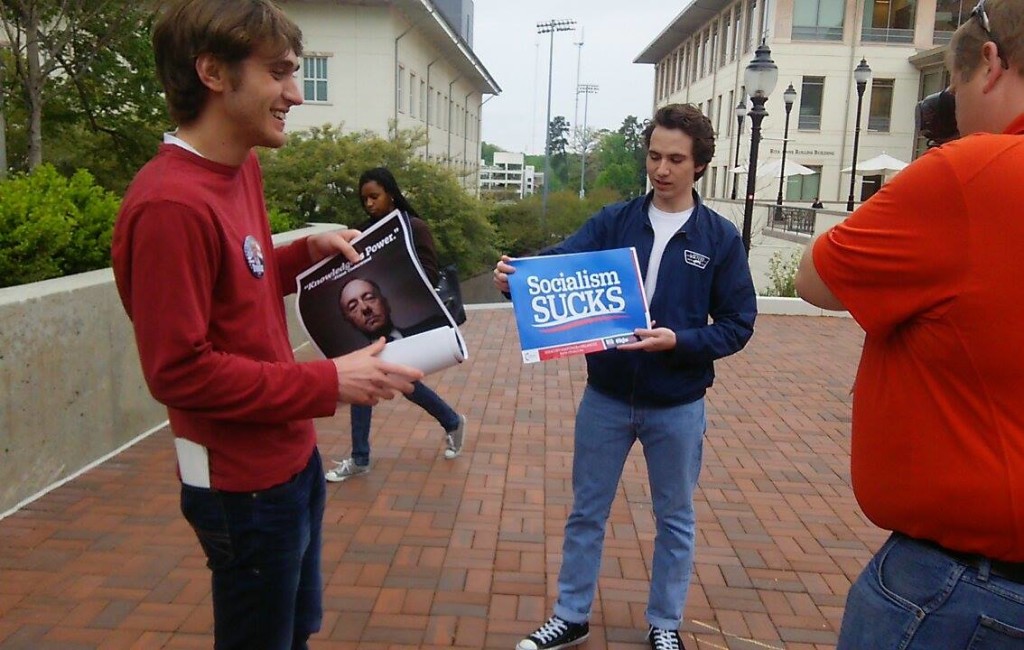 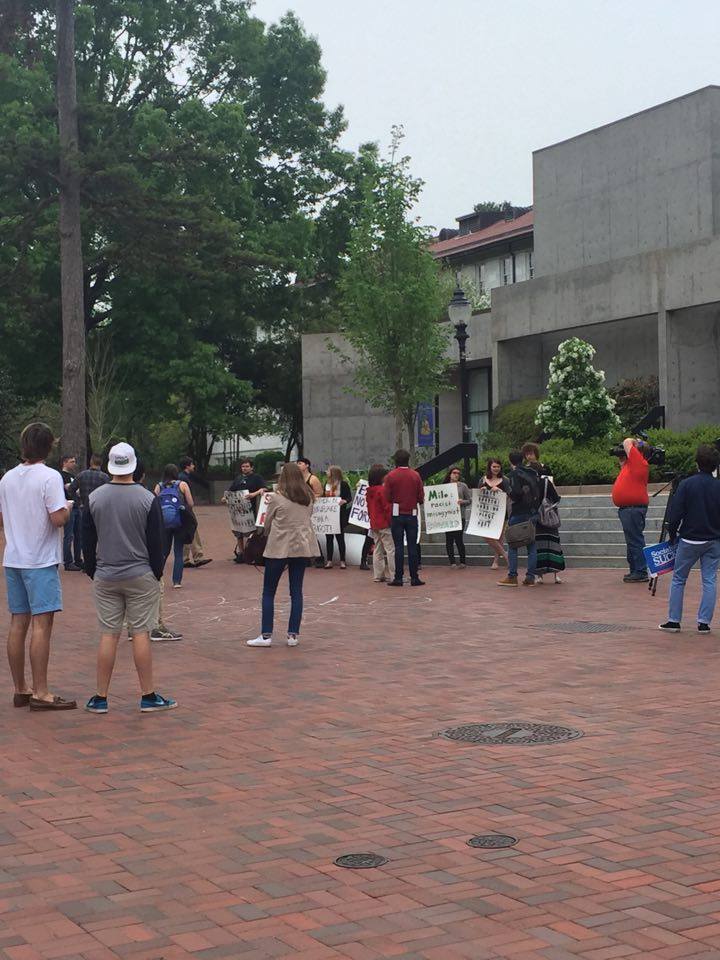 The venue is starting to pack with people. To get in, students have to show their Emory I.D. and give their email.

Shouts of “SINGLE FILE LINE RIGHT NOW” can be heard.

Books and posters are being given out and donations requested by Milo and his team. 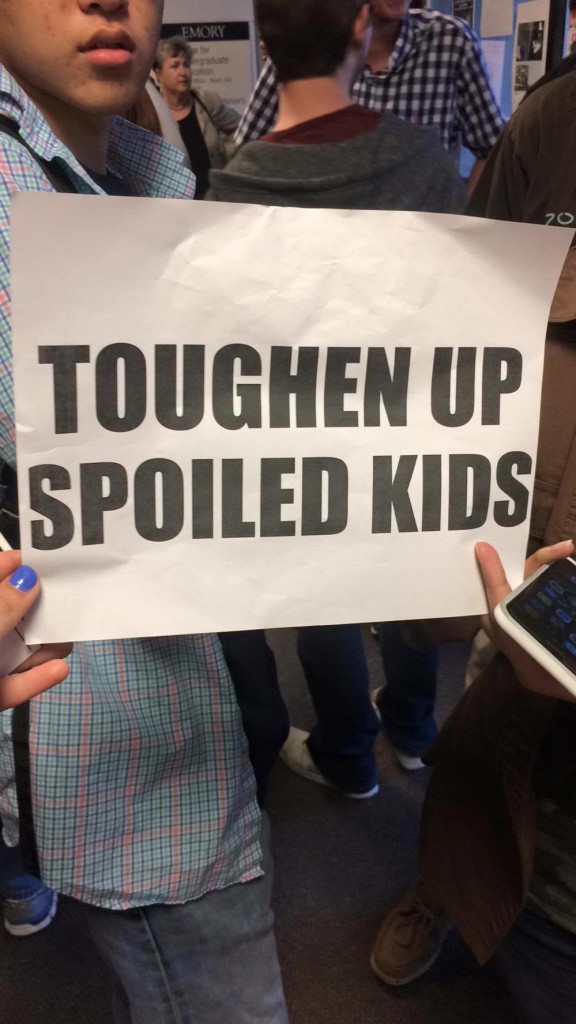 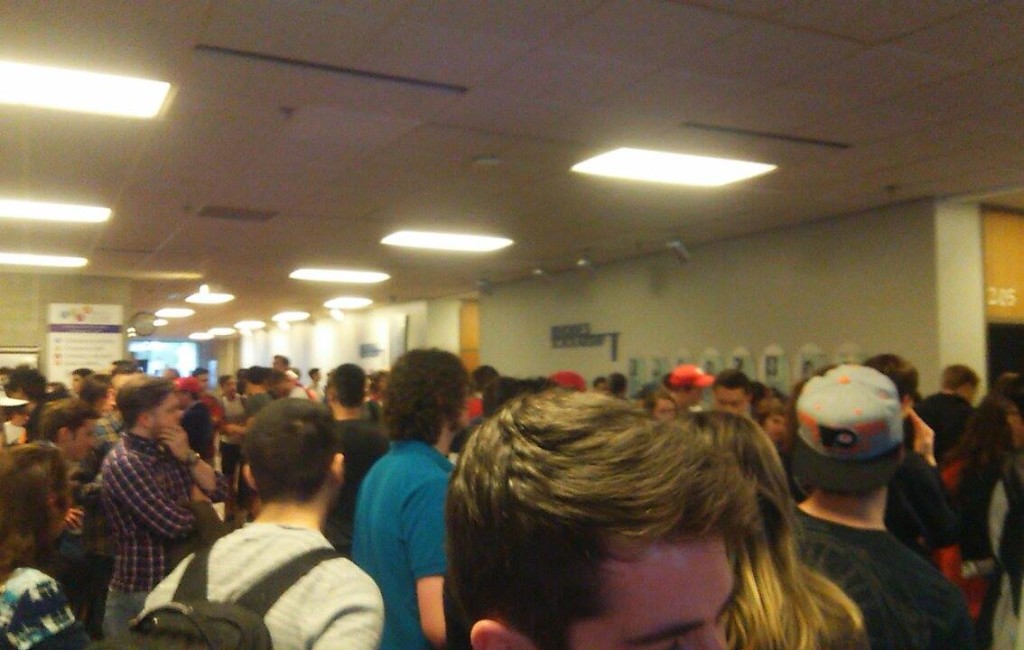 Protesters have moved into the venue. 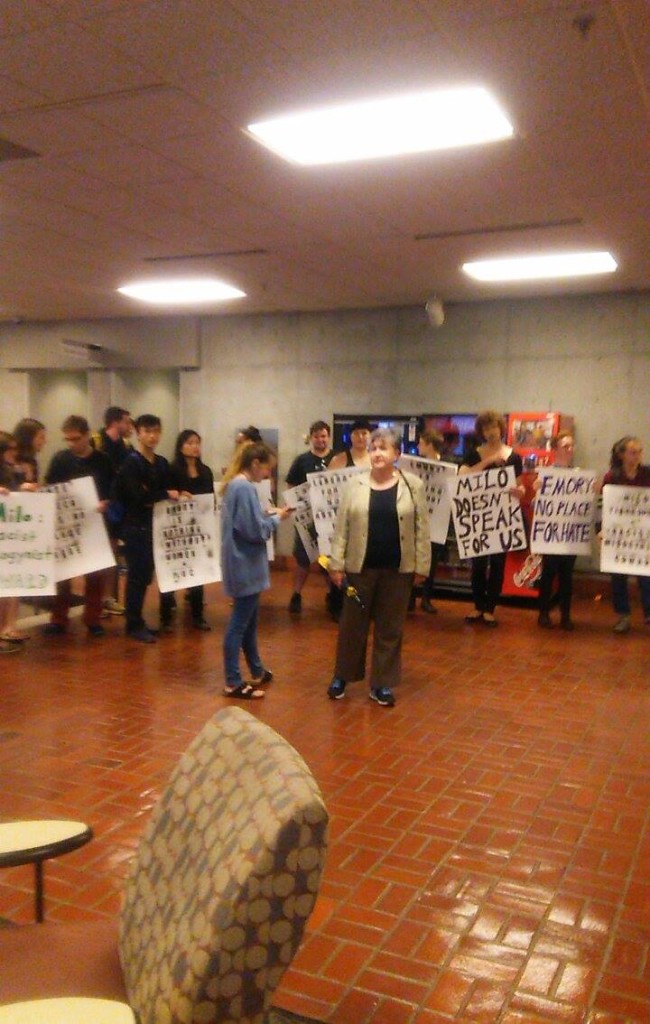 One person branded it, “A very weak protest” 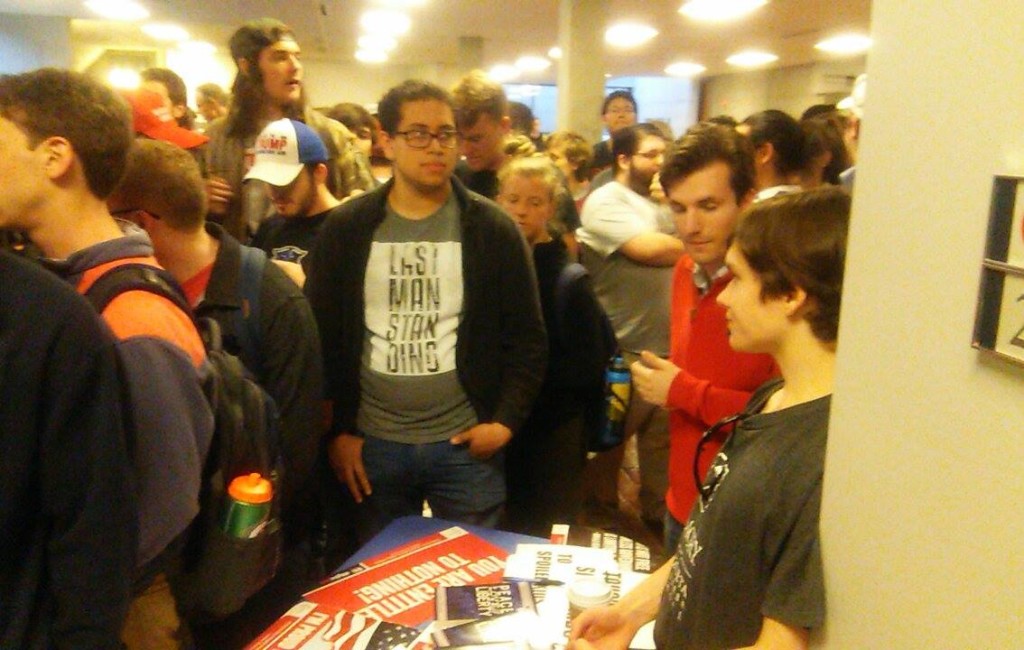 Milo Yiannopoulos is officially in the building preparing to give his talk. 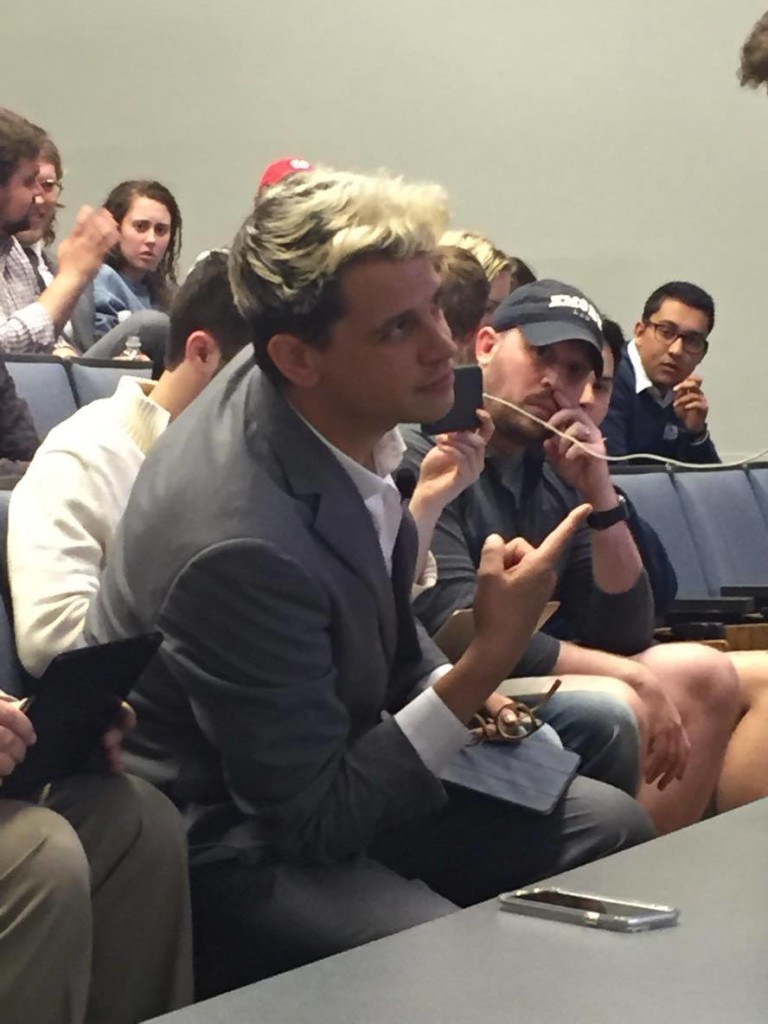 No protesters have made it into the room thus far, and the mood is relaxed while they wait for Milo to begin. 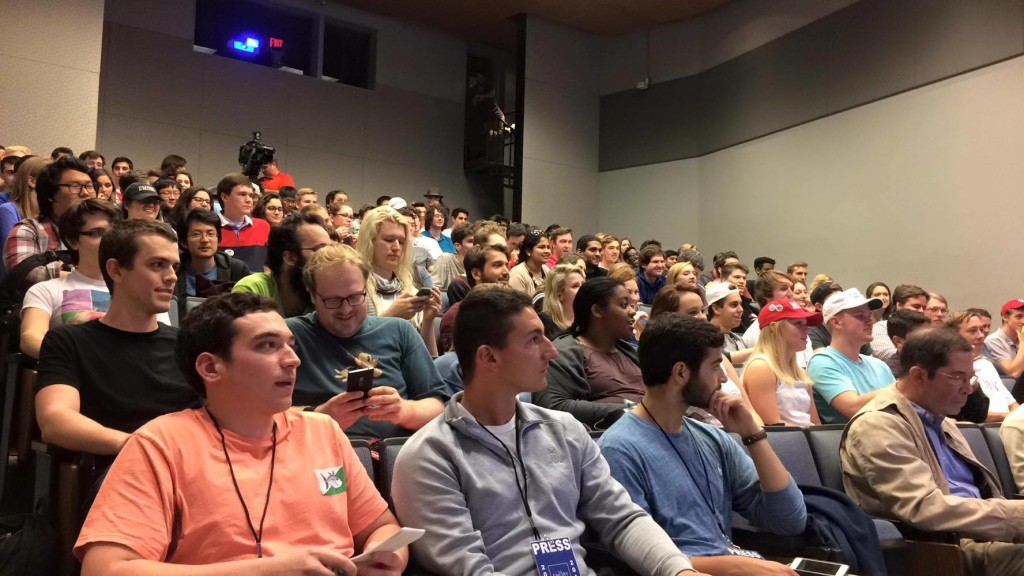 The president of the Emory republicans has just stood up to say: “Protestors don’t represent Emory”

Milo has responded with laughter to mentions of the chalkings calling him a ‘misogynist’ and ‘hateful.

Emory Republicans President said: “Even if we invite someone to speak at our campus, that doesn’t mean that we endorse every single thing he says”

He opened with: “I’m not a man prone to jealousy but I am seizing with hate because you’ve done what I do for a living better.”

He said: “Feminists are either too lazy or too late to be here.”

And on Trump, said: “Who else is a supporter of Daddy?” 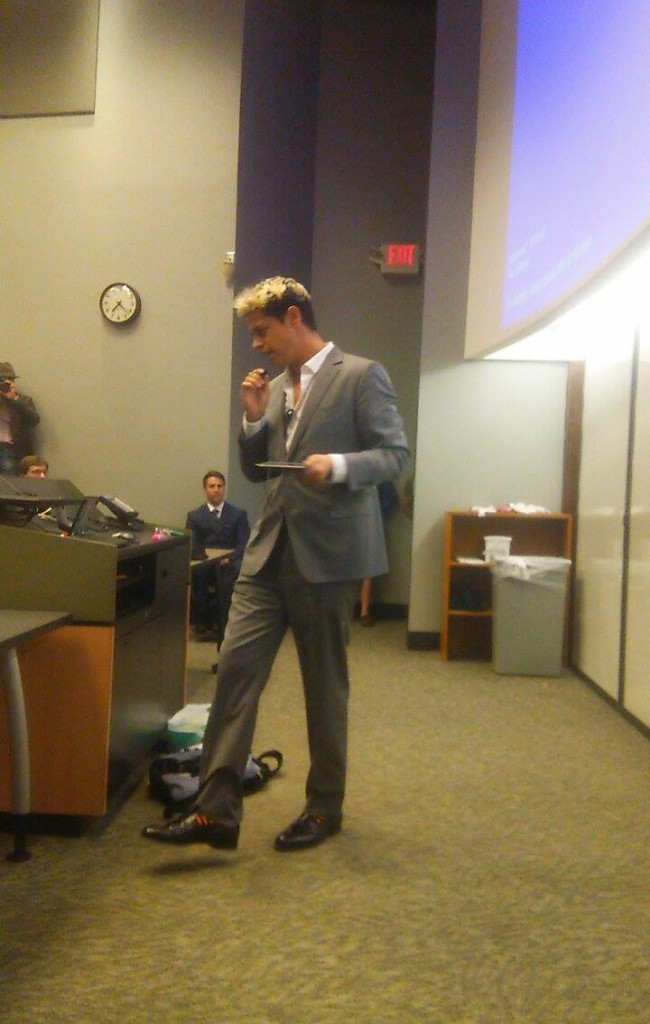 “These people are terrified of Trump because of his message: don’t back down but double down”.

“Trump’s primary cultural effect is to stick a giant middle finger up to the people who tell us how to live”.

“If you’re in the audience and you’re an art major and a Trump supporter, you might want to keep that quiet, you aren’t gonna have a fun time in class”. 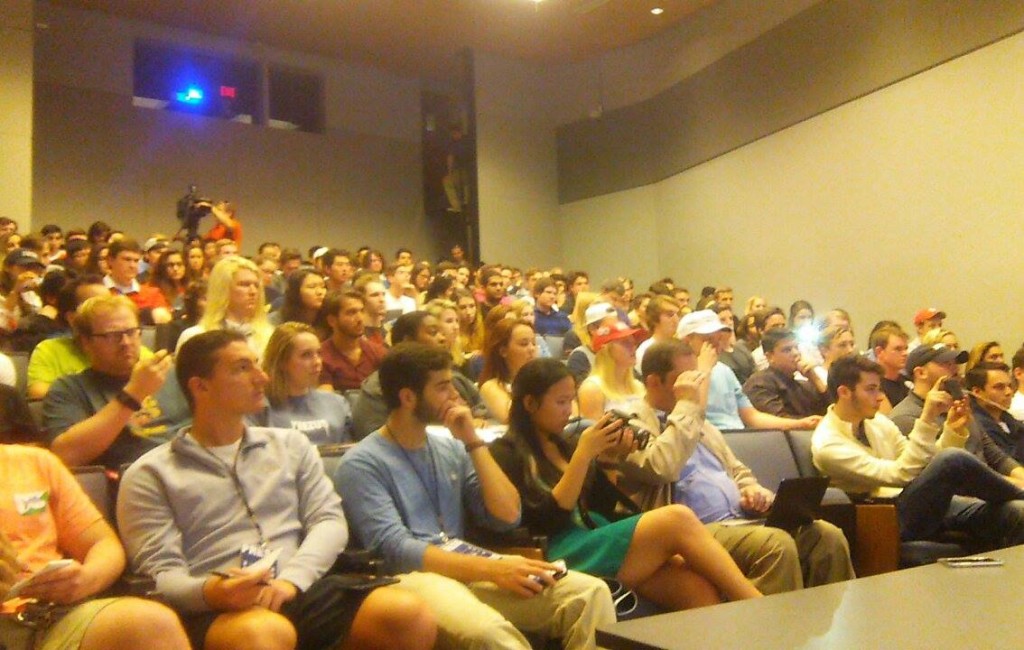 With reference to the wage gap, Milo said:

He also encourages listeners to, “be as offensive as possible”. 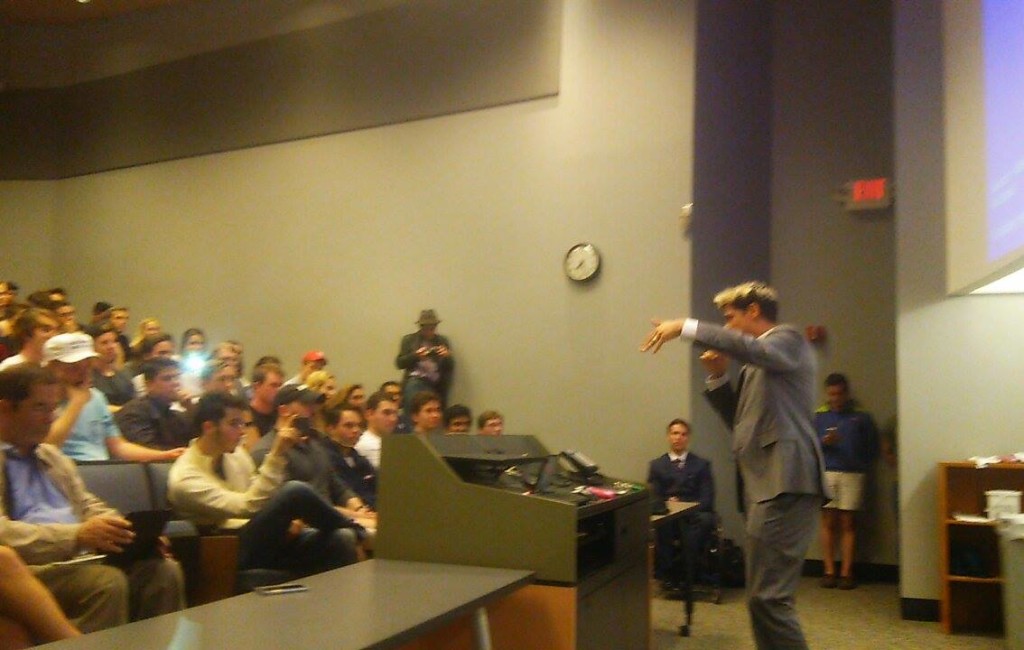 “The Trump supporters I hang out with are some of the most intelligent, engaging young people I have the good fortune to hang out with.”

“If people can’t cope with a bit of ridicule, a bit of chalk, a bit of criticism….the only appropriate response is more of the same.”

Milo has invited someone in from outside to ask him a question who said, “It’s an honor to meet you, sir”.

He asked Milo, “Did you know you were going to experience backlash?” 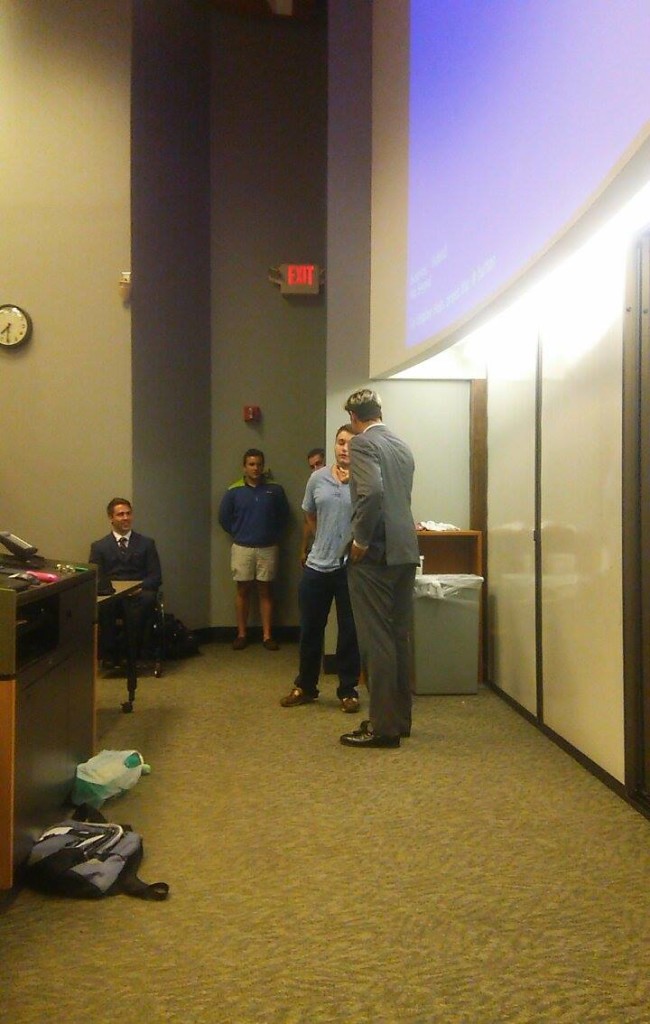 “I knew I was gonna become public enemy number one”. 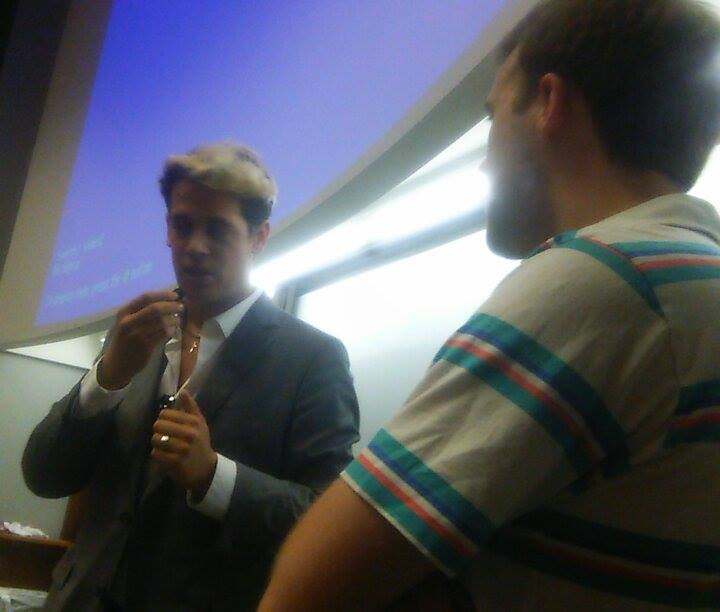 Another student invited in from outside asked him if assimilation means that he should give up his indian traditions.

“As a son of two Indian parents, I celebrate Indian festivals like holi, does assimilation mean I stop celebrating these festivals”.

Milo responded: “If you celebrate it too much it becomes cultural appropriation”.

His comments on cultural appropriation are being met with laughter by attendees.

“The only muslim people you have in this country are middle class or terrorists”.

“I worked for a climate change NGO a year before journalism. What I saw there horrified me.”

A student asked him what he thought of democracy. Milo responded:

“Democracy works well, it’s the best thing happened to mankind. But it is not working well”.

Responses from the room are indifferent – no one seems to be responding with any strong emotion.

“It makes sense for a gay person to be anti-feminist. They fucking hate men”.

“All the serious people seem to have left the feminist movement”.

A student asked, “What do you think of immigration?”

Milo responded, “We should stop it” which was met with laughter from the audience.

Giving his opinion on religious liberty bills, Milo responded, “It makes me want to go out and shoot homosexuals in the street”.

In response to a question on gun control, “More guns the better”.

When asked about the protestors outside: “Fucking idiots, needs to be laughed at”

There’s a lot of laughter in the room with a lot of the audience appearing to be on Milo’s side, laughing with him not at him.

One student asked a question regarding political correctness, saying, “I’m from China.”

Milo responded, “You don’t have it there.”

She responded, “Yeah, even you understand.”

12 people have now walked out of the talk, Milo has said he’s about to wrap up.

“Feminism is a large reason women have been less happy since the world wars”.

“Thank you to feminism for turning us gay.” 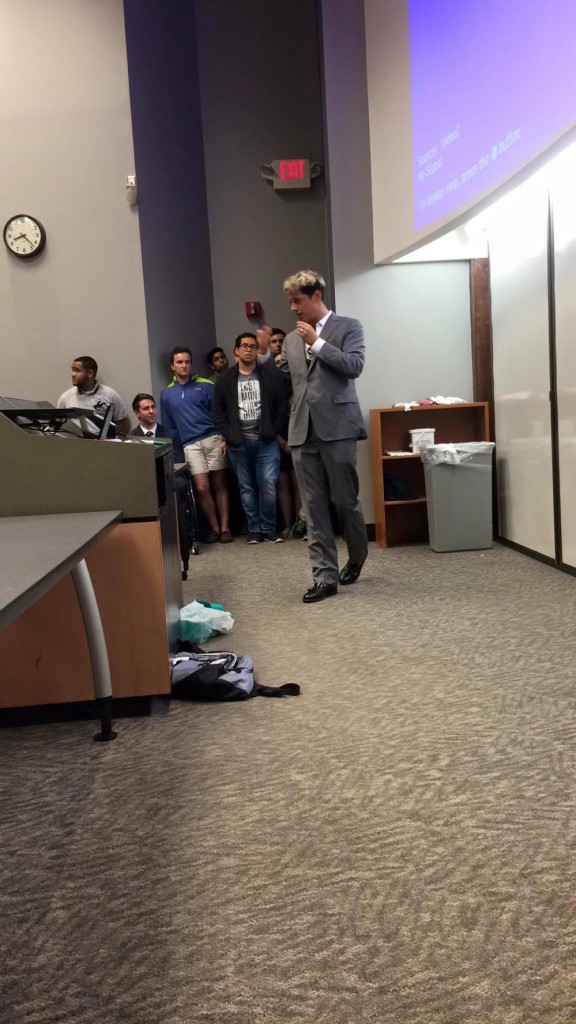 He’s now taking his final question of the night.

“By publishing videos of straight white males, it affects opinions.

“The generation below us doesn’t like such videos of straight white men and they really fucking hate BuzzFeed.”

He ended his talk by holding up a bag of chalk and inviting people to come and take a piece of chalk from the bag.

Milo is now walking with members of the audience to Asbury Circle to do some chalking.

The crowd are chanting ‘USA!’ and have picked up a confederate flag.

Milo has headed to Asbury Circle where he’s just chalked, “Dangerous Faggot” on the ground. 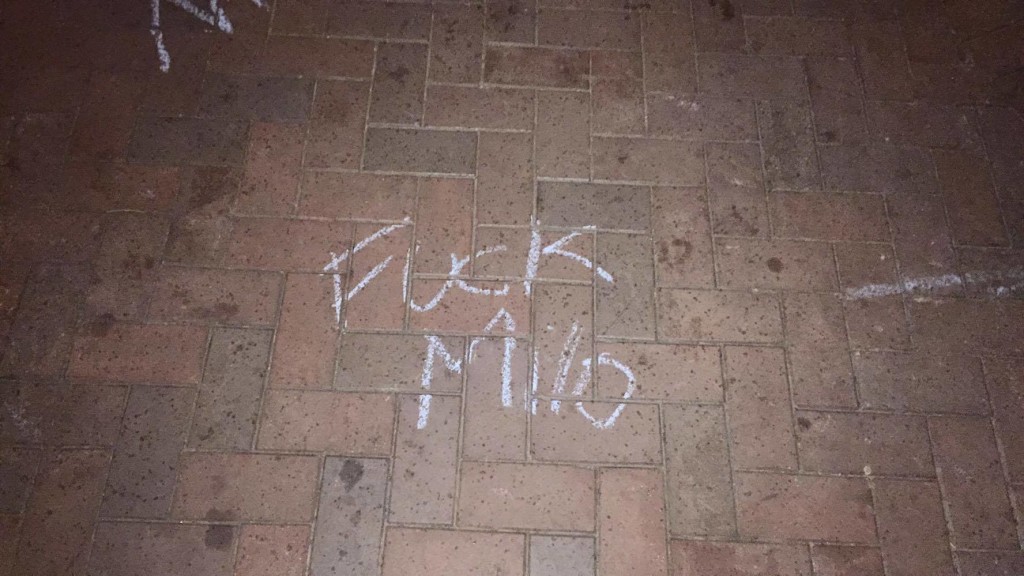 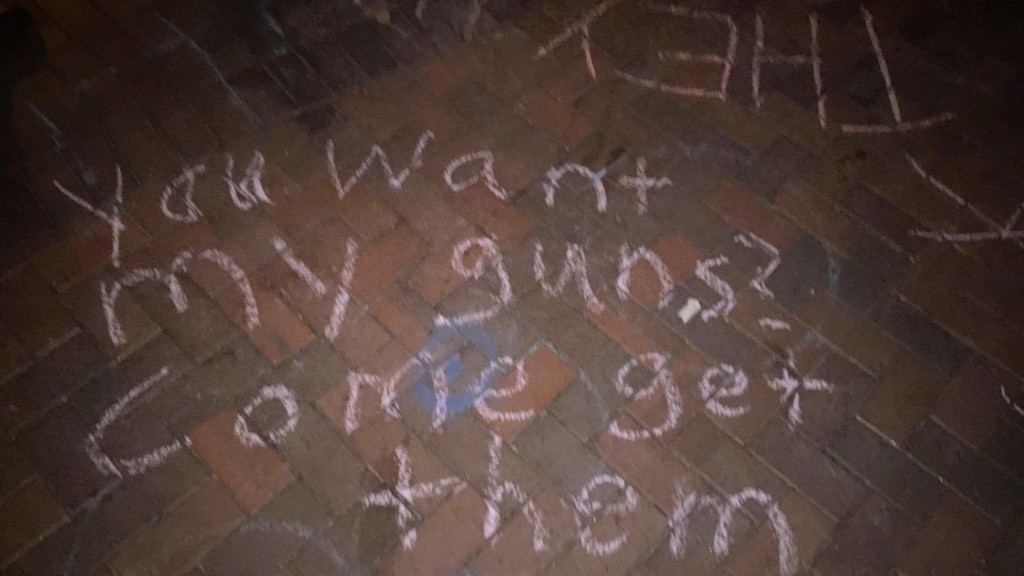 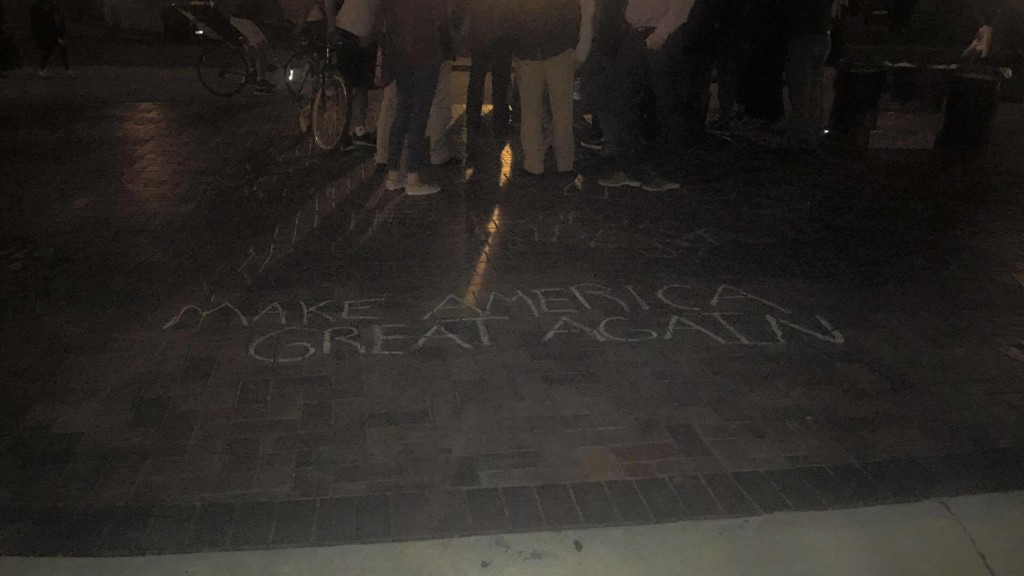 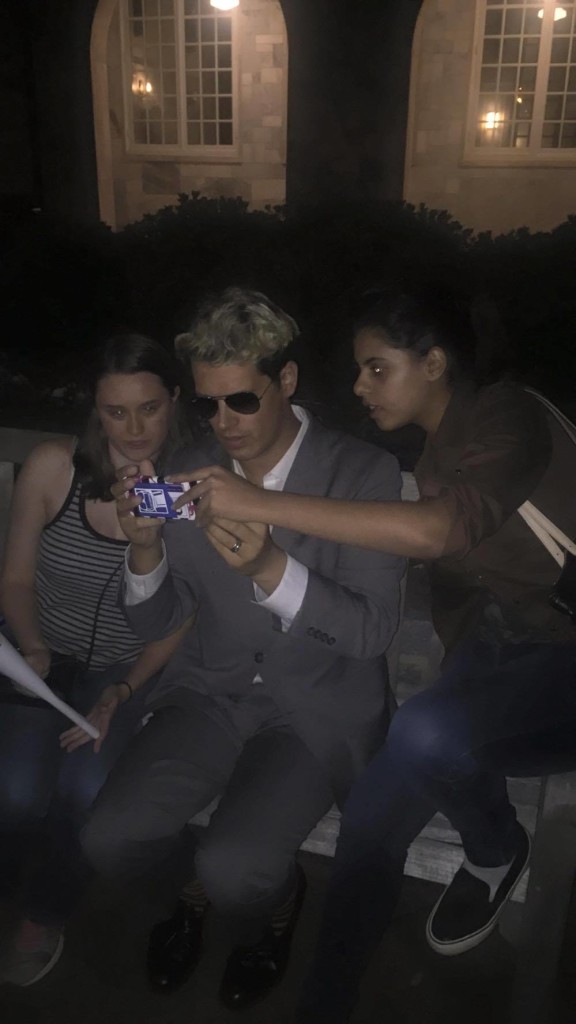 Check back in for Milo Yiannopoulos’ EXCLUSIVE interview with The Tab Emory.