“There is no such thing as an Islamophobe”

Starting at 6:30 PM chants of “No Robinson, no KKK, no fascist USA” and “Students have no patience… for racists on our campus” was heard from protesters gathering in Lerner Hall. They held signs reading “Muslims are Welcome here”, “Black Lives matter”, and “No to Islamophobia”. Surrounding the protesters are police officer as well as a NYPD truck parked ominously across Broadway.

The protesters gathered to condemn the speech of Tommy Robinson, the founder of the far-right English Defense League, an organization which often violent protests of “militant Islam”. Robinson has since broken with the EDL but has continued to protest the entrance of Islamic refugees into Britain saying he would “personally send every adult male Muslim that has come into the EU over the past 12 months back tomorrow if I could.” 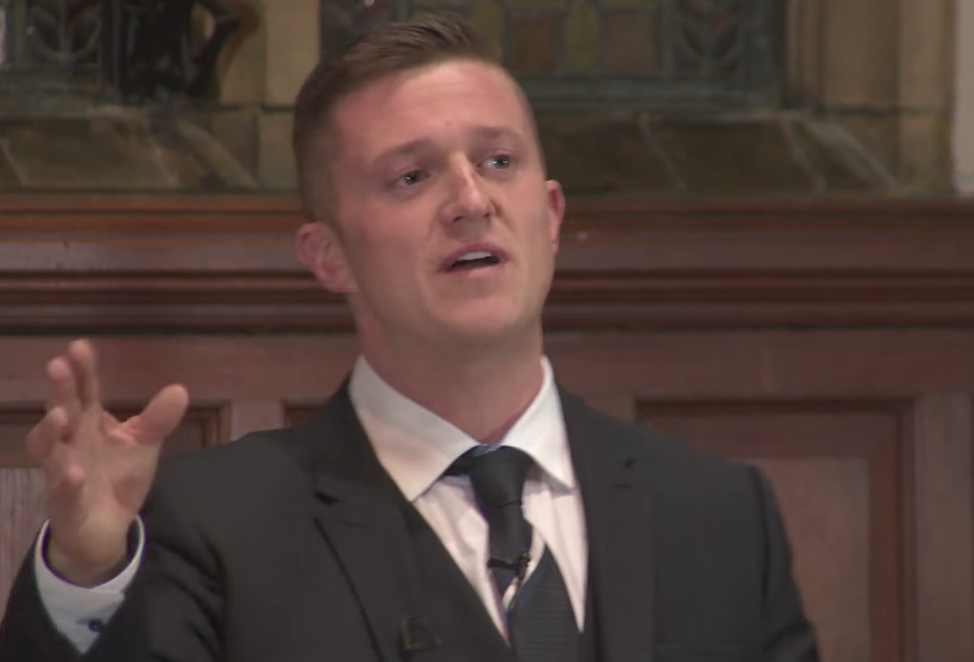 Robinson speaking at the Oxford Union in 2015

The debate over Robinson’s appearance at Columbia has been ongoing since Columbia Campus Republicans extended him and invitation. Robinson’s speech, was titled “The Fall of Europe: Mass Immigration” and was described in the Facebook event as an “in depth analysis”of the refugee crisis in Europe. Multiple protests and educational events –including the protest outside Lerner and a teach in with the director of CAIR NY– were organized by students to oppose his appearance on campus.

Columbia’s administration clarified its position on the controversial speaker in an email from Susan Goldberg, Executive Vice President for University Life. The email stated that Robinson’s message “contradict[s] Columbia’s core commitment to the value of all members of our community and to diversity among our students, faculty and staff”. However, the email concluded with a defense of Robinson’s right to speak; “Having University officials decide which ideas outside speakers can express on campus also poses serious risks to academic freedom.”

As it neared 8:00 PM, the designated start for Robinson’s speech, protesters flooded into Lerner, lining the ramps and far outnumbering non-protesting attendees. Robinson, after about ten minutes of alternately silently looming over the gathering of protesting students and attempting to distance himself from Nazism with claims like “most of my best friends are black”, seemed to reach the heart of his speech. With little factual base he appealed to the long history of white English nationalism by continually stating that England was the subject of a conquest by Islamic “fake refugees”. He asserted that white Europe was under attack, that his town was “taken over” and that “Islam is being pushed in Europe, Islam is being pushed in your country, Islam isn’t a peaceful ideology”. Additionally, he claimed that there was an unspecified city in England in which 76% of Muslims marry their first cousins.

As Robinson’s speech came to a close, protesters attempting to leave the auditorium were reportedly detained by administrators demanding university ID’s. The protesters were eventually released. However, their attempted detainment along with the blocking of protesters from entering the event has sparked a discussion over the role public safety played in discouraging protest.

When, if ever, should Columbia bar a speaker and who should make that decision? How present should campus security and the NYPD be at student protests? With the upcoming appearance of Mike Cernovich, an alt-right activist who has stated “diversity is code for white genocide” this is a debate sure to continue on the Columbia campus.