Meet Paul Wislotski: The nomad artist asking students to draw a bed sheet mural on campuses in every state

There’s something very cool going on in Clemson today and tomorrow, and it’s courtesy of Paul Wislotski. If you see a man sitting by a groovy van with a big beard saying, “Come draw, come have some fun” then you’ve found him.

Paul is traveling to campuses all over the country to bring students collective art and to give them a creative outlet. Originally from New Jersey, and then Florida, Paul started hitchhiking in 1981 and has been a traveling artist ever since. His energy and positivity about his project and the world was contagious as we spoke to him, after contributing a drawing to the bed sheet of course.

What are the rules?

No, not rules, guidelines. They guide the art piece. No writing, no peace signs, or yin yangs or crosses or rainbows or hearts or smiley faces or musical notes, no signs or symbols and I reserve the right to judge that, if I think it’s a symbol I’ll cover it. Not too big, and don’t cover nobody, but you can add to people. If you see a house without a chimney, put a chimney on it, adding to people’s is okay. And the most important one of my guidelines is that parents have to draw with children, I won’t let children draw alone, an adult has to draw with the little kids. 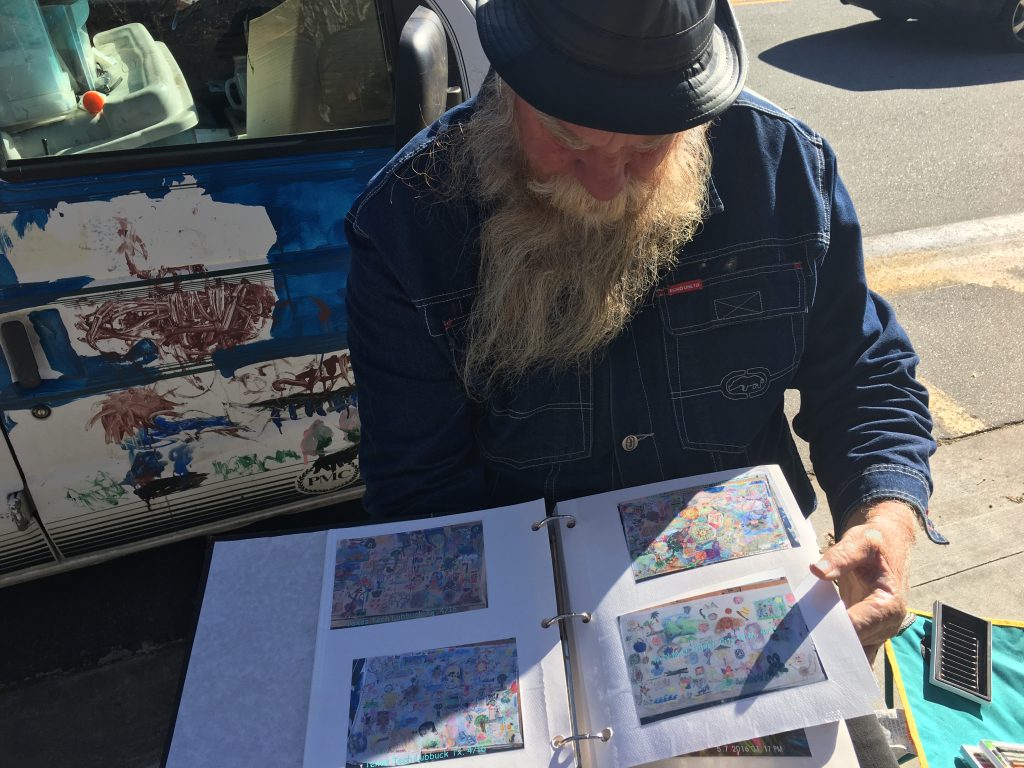 And why is that?

I want a bonding process. I want them to imagine together and bond together on the art piece. I’m a moment maker, God has made me a moment maker to make moments in people’s lives so that they can go out and take this simple idea and make moments with their families.

Why are you doing this?

I’m a Christian missionary currently on a mission from God to share Jesus through collective art on at least two university campuses in all 50 states. Now with Clemson, I have 35 states done.

Why do you think it’s important for students to do this?

Well, what I’m sensing on the campuses, and I’ve been around the campuses a lot around America, is just a depressed spirit settling over all of them. Because the academics are pushing so hard, and they have to, I’m not saying that’s bad, but the clubs and the Greeks need to balance it out. So what I’m pushing for is for the clubs and the Greeks to set these up. Put a bed sheet out there, let the students draw together, let them have some fun together.

Let’s kick start the right side of the brain and then after they’re done with it, send it around the world where people are suffering. People all over the world could use a piece of America’s imagination, this way they see America the way we really are: the land of hope. Let’s touch the earth, let’s get the 90 O’s to reach out to touch the earth with their imagination. And I’m gonna tell you, you guys got some great imaginations, it’s amazing. 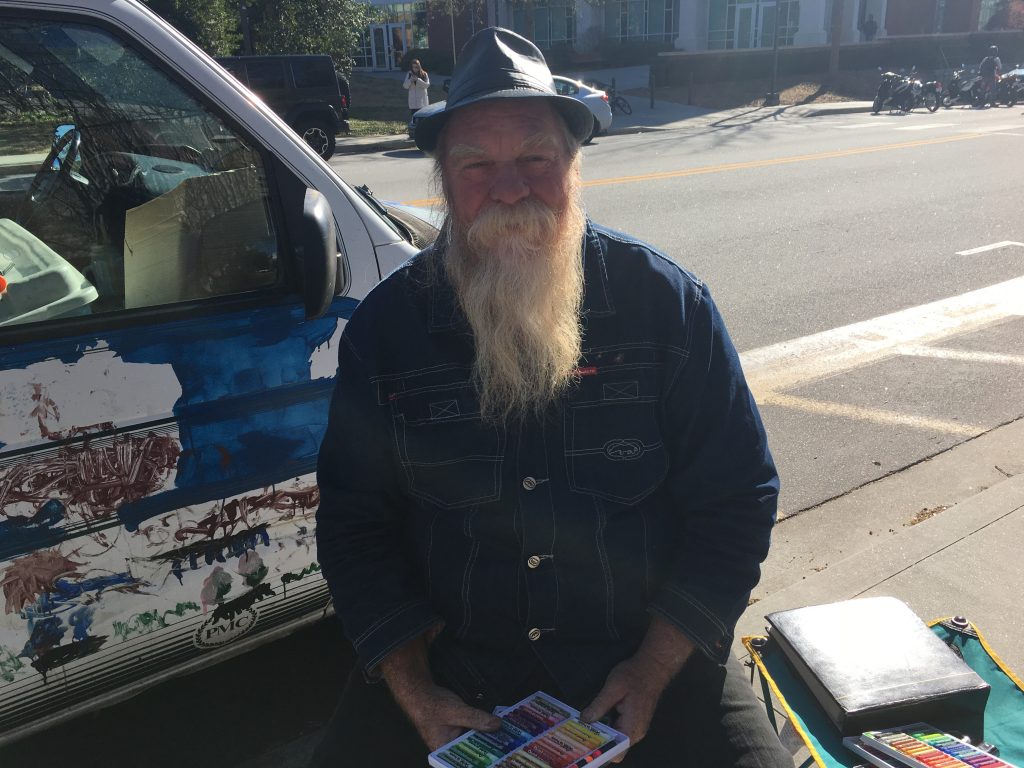 Do you send yours to other countries?

No, this is part of my collection, I have a collection from across country. I’m pushing for the clubs and Greeks to do it, though.

When did you start doing this?

Woodstock 25th anniversary I did my first one, I did one there and we did paints. It was okay, I mean it wasn’t bad, I learned how to do it a little bit, but I mean it took years to refine it. Bed sheets were about the best, canvas was expensive, and paints, paints were too messy.

And then in 1999, I hit 40 and I said you know I got to do something so I hitchhiked to all the state capitals and we did artwork there. Not quite as good as the campuses, but we did artwork in all the capitals. 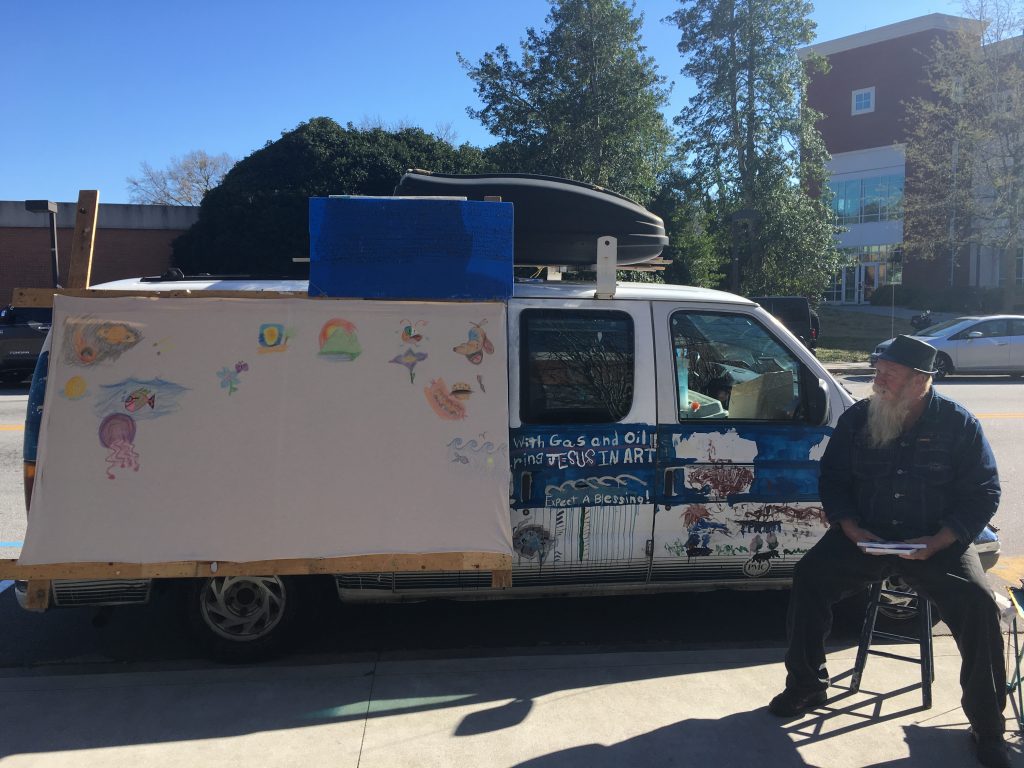 What made the Woodstock’s 25th anniversary the place you decided to start this?

I didn’t even know I was going to do it, but I saw there was no place for the people to be creative, but the music was good. This was at the original site, we had about 60 to 80 thousand people just show up for a party and they put up a stage and I put up a big tent and inside of it, I put up a tarp and we painted it. We painted it together.

If you do this with your family, you’ll see families bonding together creatively and it’s been since radio. TV came along and pushed the imagining together aside. Every Saturday night they used to gather around that radio and listen to the Howdy Doody or something, they would listen and imagine together. Your generation, you’re going to bring it back and that’s what’s going to make you guys the best generation ever because you’re going to get families to imagine together. Woooo! That’s powerful.

People passed by and Paul called out, “Come on now, draw something guys! Have some fun!”

Sorry if I’m taking away your business right now.

Listen to how you say sorry, your generation has got to get away from that ‘sorry’ word because your words are who you are and if you’re saying a trivial sorry, when you really have to say it, it doesn’t mean much. So, listen to your words, try to get that sorry out, there’s a lot of other words you can use besides that.

Okay, I’ll try. How long are you doing this for?

From now until November I’ll go to the universities, I’ve got 15 left. 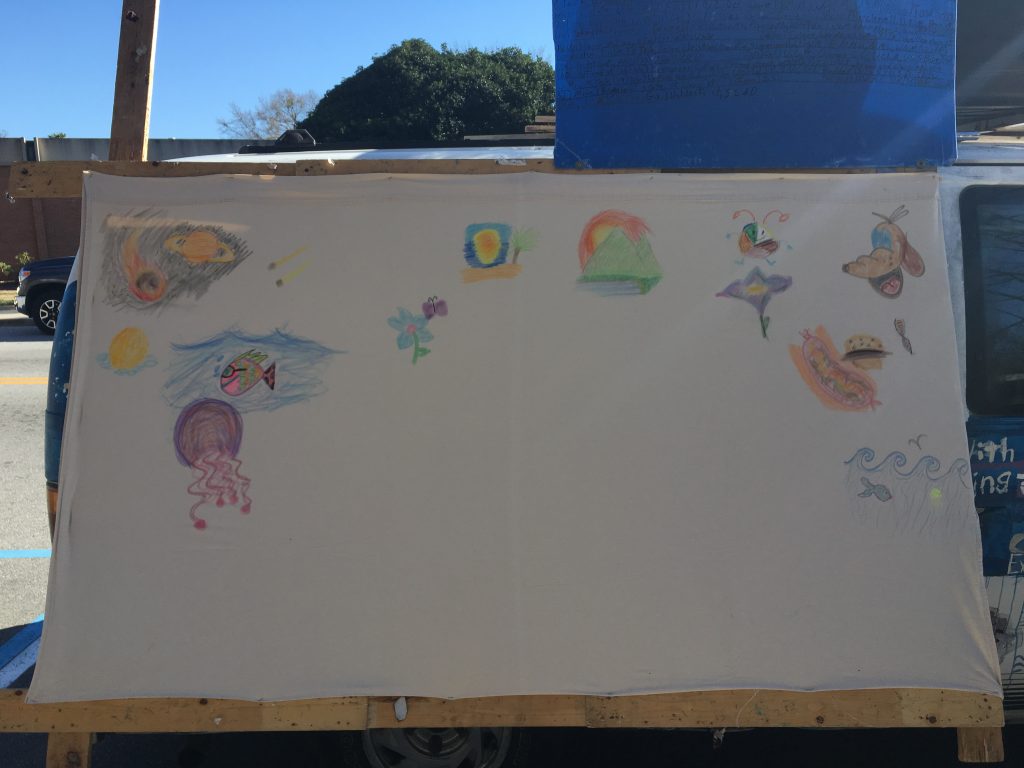 How long will you be in Clemson?

I’ll be here today, tomorrow, and we’ll see how the art piece goes maybe a half day on Friday. We’re gonna get a good art piece, we’ve already got a good start.

After we finished speaking, he called me back and asked me to listen to one more thing he had to say. He made it clear that his main message is as follows:

You know they say one person can start a revolution, well I’m starting a revolution of bed sheets, pastels, love, art, and Jesus instead of religion, guns, war, and hatred. And the 90 O’s generation, you’re going to be the creative crusaders that are going to push us across the earth. America’s 90 O’s are going to be legendary in the history of earth because you’re going to reach out and give people hope and say here, here’s a piece of us.