Everything you need to know about Rhett

You may have seen Rhett the dog sitting at the GSU link, scurrying along one of his many walks down Comm. Ave, or perhaps even teaching a lecture on Polymorphism and Multiple Inheritance in C++.

You probably stopped to pet him or simply smiled as you passed by, but here are some facts you may not have known about our little mascot. 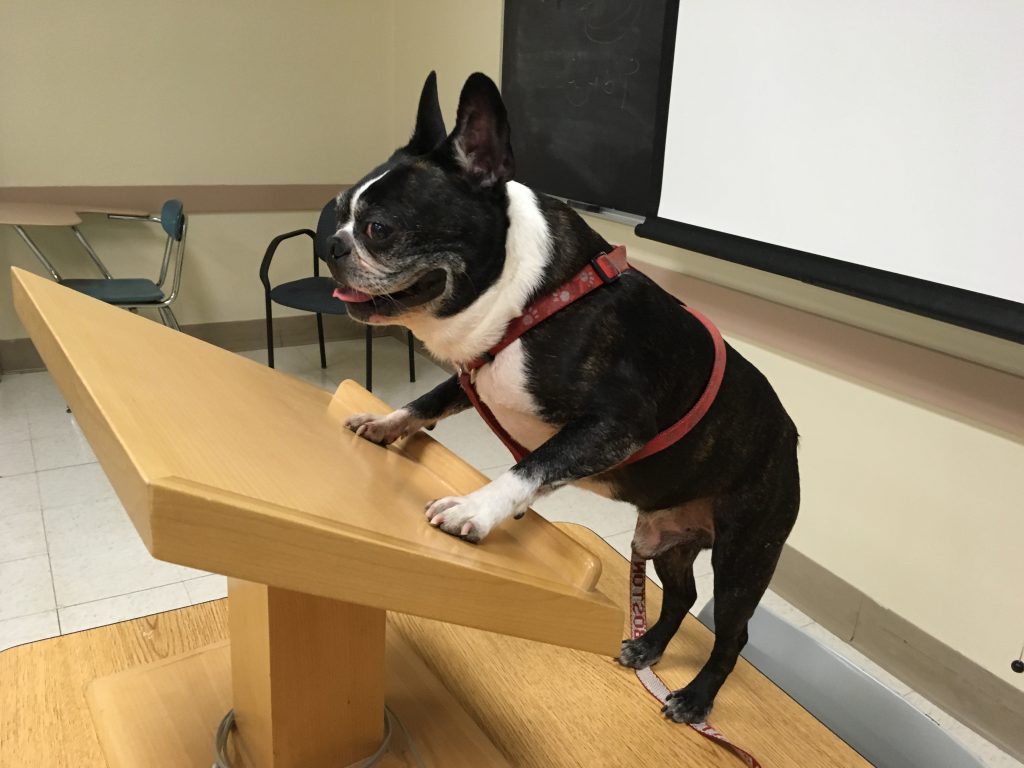 Boston Terrier Rhett in a classroom.

Rhett’s a guy and he is almost 9-years-old

Despite his old age, Rhett still manages to look youthful with the abundant energy of a pup.

His contagious  smile and wagging tail can brighten anyone’s day.

His birthday is January 26th

For all those astrology geeks out there, this makes him an Aquarius, which may contribute to his lovable personality.

“He is a wonderful and loving companion,” said his owner Cal. “He is very loyal and playful.”

Indeed, Rhett never seems to pass up a head scratch from a passing fan. 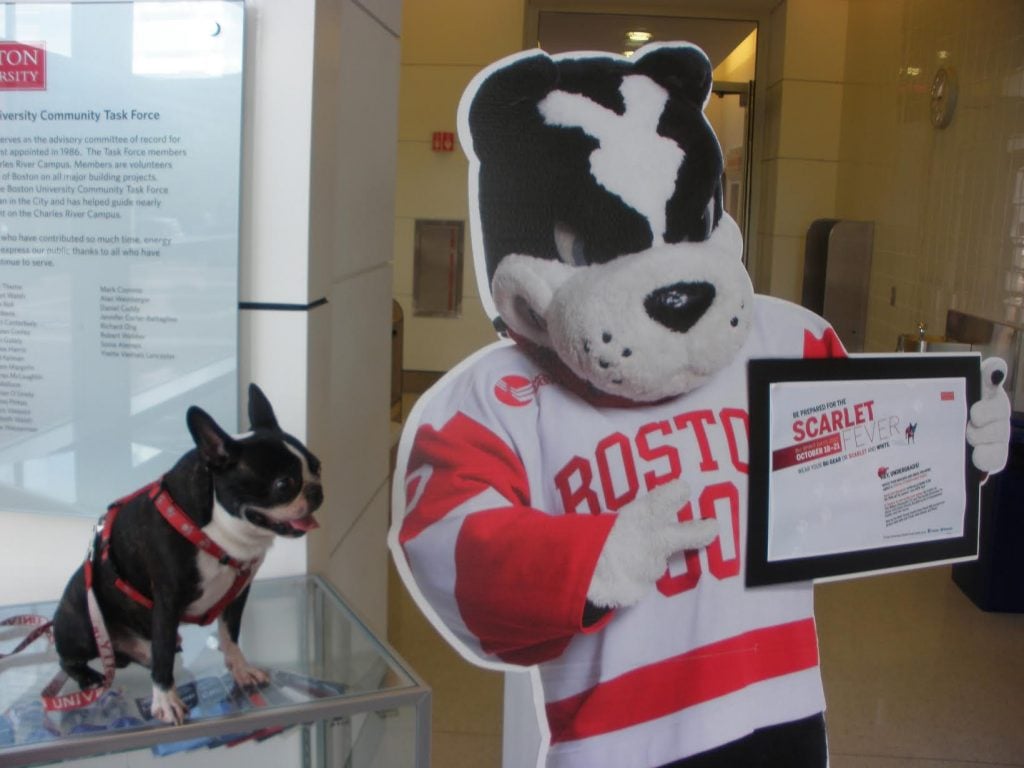 Rhett the dog beside a cardboard cut out of Rhett the Mascot.

Rhett was born in Arkansas

Rhett was purchased online from a breeder in Arkansas and was flown out to Cal in Boston at only 10 weeks old.

“He was only three pounds when he arrived,” said Cal.

The young pup was shortly after named Rhett because of the resemblance to BU’s mascot suit.

Rhett became BU’s Mascot when he was two-years-old

During a walk on campus, a BU photographer asked Cal if it was okay to take Rhett’s picture for the university. Cal agreed and has seen many of Rhett’s pictures used in advertisements around campus since, starting Rhett’s claim to fame at the young age of two. What a legend.

“I am the one providing the music we skate to, been doing that since 2001,” said Cal. 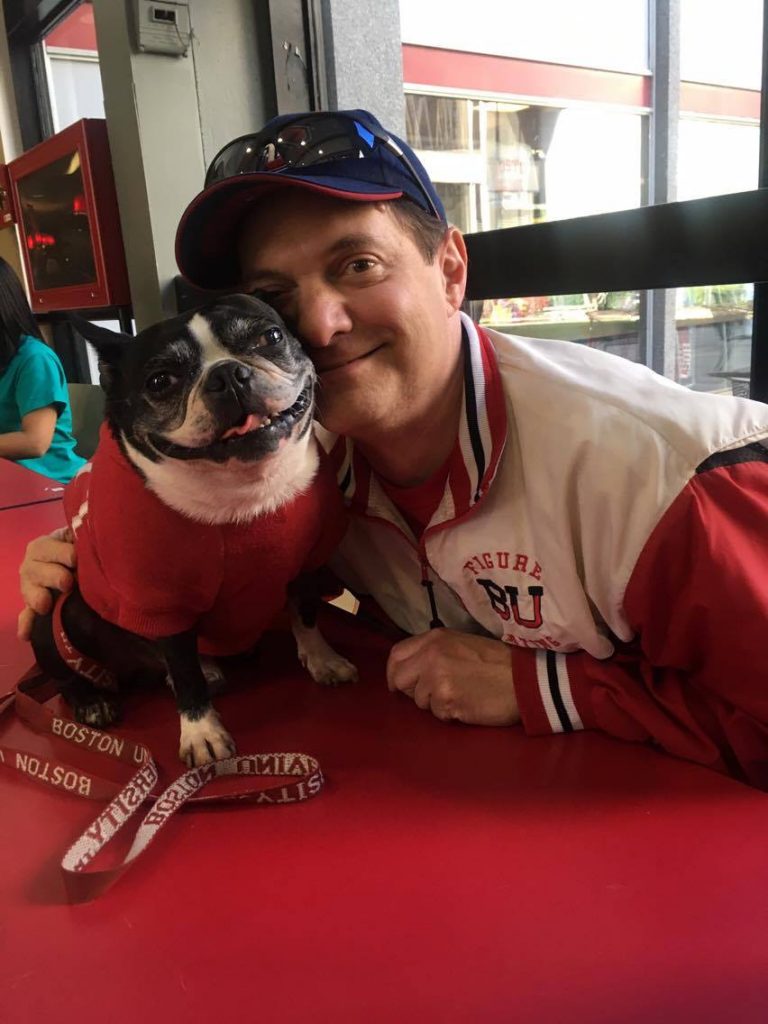 Rhett and his owner Cal at the GSU link

Our clever college dog is able to keep up with BU’s demanding academic atmosphere. He’s intelligent and able to understand some of our acronyms such as CAS and GSU.

“Rhett is very knowledgeable about the BU campus,” said Cal. “When we are on our walks I will ask him where he would like to go. If we are sort of near GSU and I ask him if he wants to go, he will lead me right there.”

Oh Rhett… you dog you.

He attends our games (probably more than most of you)

Rhett likes to attend women’s soccer, lacrosse, and softball games to cheer on BU athletes. Sadly our little friend is not allowed at indoor games, which Cal was told was due to insurance regulations.

Nobody cheers against BU on his watch

While Rhett doesn’t seem to mind BC or Northeastern students (he’s friendly and lets them pet him), he did have one incident with a Vermont fan at a women’s soccer game.

“A lady wearing  Vermont gear was seated right behind us chanting ‘lets go Cats’,” said Cal. “The third time she screamed, Rhett turned around, looked at her and growled. She left the BU section of the stands and sat with her people. Everyone cheered Rhett and pet him, he had a big smile on his face.” 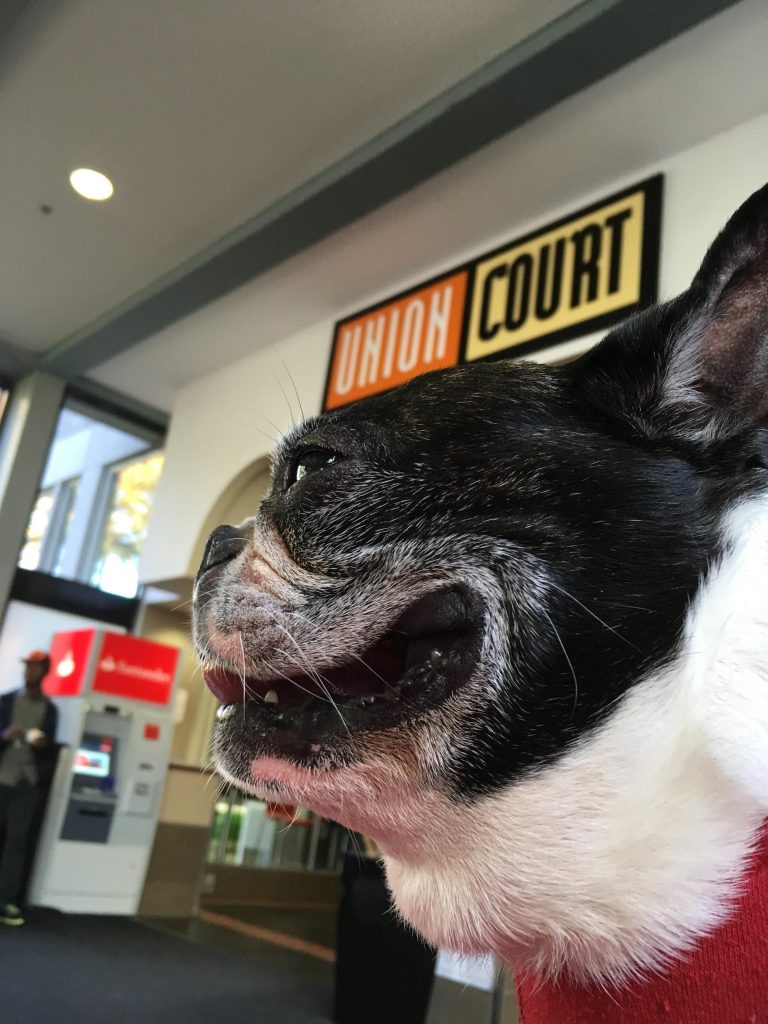 Rhett in the GSU

Rhett eats the best dog food and treats Cal can give him, but his favorite people food is chicken. Also, like most dogs, he hates the mailman, squirrels and (probably deep down) BC.

So next time you see Rhett wondering around campus, take a moment out of your day to give him a little love.