‘I am deeply sorry’

UA student Kyle Harcourt, 20, who sent racist and homophobic messages to a woman on Tinder has issued an apology.

In a statement to NJ Advance Media, the New Jersey native apologized by saying, “Words can not express how truly sorry I am for the hurt that my actions have caused. I take sole responsibility for my actions and recognize they are completely unacceptable.”

Harcourt goes on to say, “I have begun therapy through the help of professional counselors and will continue to do so. Once again, I am deeply sorry.”

Just wondering how @UofAlabama and @SigmaPi & @SigmaPiAlabama are going to handle racism from their student & member. Got these today. pic.twitter.com/ItNYrAxEW8

The UA junior sent several inappropriate messages to 20-year-old Emi Miller, who posted screenshots of the messages to her Twitter and Facebook profiles. Both of her posts soon went viral.

In his messages to Miller, Harcourt repeatedly used the n-word, along with other intimidating language including homophobic slurs. 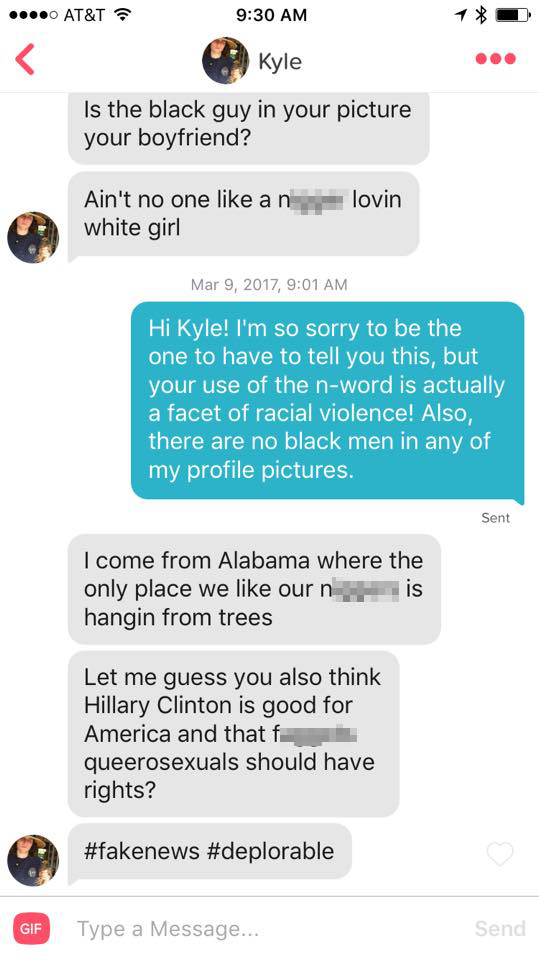 Miller said, “When I first saw the message, asking about the African American man in my profile picture and calling me a ‘n***** lovin’ white girl,’ I was initially confused and shocked. I screenshotted that message immediately because I was just thinking, ‘this isn’t okay, I have to do something about this.'”

Miller said Halcourt has not reached out to her directly.

She also said, “I am glad to see that he is taking an important step towards rectifying his role in perpetuating racism and bigotry in the United States. However, it is not me who he needs to apologize to, but those that were hurt by the historically violent and oppressive language he used in this incident and the people who he has hurt through similar language and attitudes in the past.”