We need to know what happened at SAE on Friday night

Halloweek is a time when we can all let our hair down and get a little rowdy on campus. But on Friday night on High Street, the party seemed to have taken a disturbing turn.

I went to the party at Sigma Alpha Epsilon that has since made headlines around the world.

With a nod and chivalrous wave of the hand, I was almost immediately let into SAE upon arrival.

My male friend was not as lucky, instead being pushed aside into the group of disgruntled guys waiting to be granted entrance. Yeah, that might have been a touch douchey, but come on – what frat doesn’t do that? It’s all about that high girl to guy ratio.

The party was exactly how every SAE party is: super fun if you’re a freshman girl or in the frat, and not so much if you’re anyone else.

After a little over an hour, I’d had my fair share of drunken small talk and dancing like nobody was watching, so I pulled an Irish exit and went back onto High Street to tell my friends to meet me somewhere else.

As I stood on the sidewalk playing with my dragon onesie, I heard one of the SAE doormen scream, “If you don’t show us your Yale ID, your driver’s license, or your passport, you’re not fucking coming in!”

So, naturally, I left.

On Saturday morning, it was easy to brush off the whispers of what had gone down the night before. I was there, I would have known if something had happened.

But after reading Neema Githere’s status on Facebook, I realized the severity of the issue. 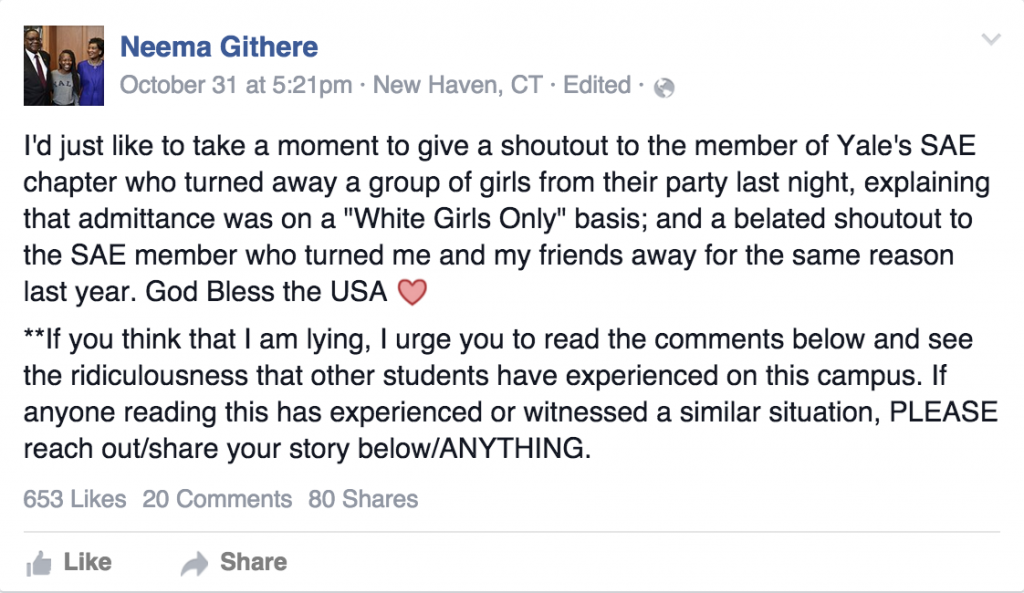 It’s not a secret around campus: SAE’s reputation sucks.

That being said, a large portion of the fraternity is made up of admirable students, making this pill a hard one to swallow.

The responses to Githere’s post, were as disturbing as the original allegation. 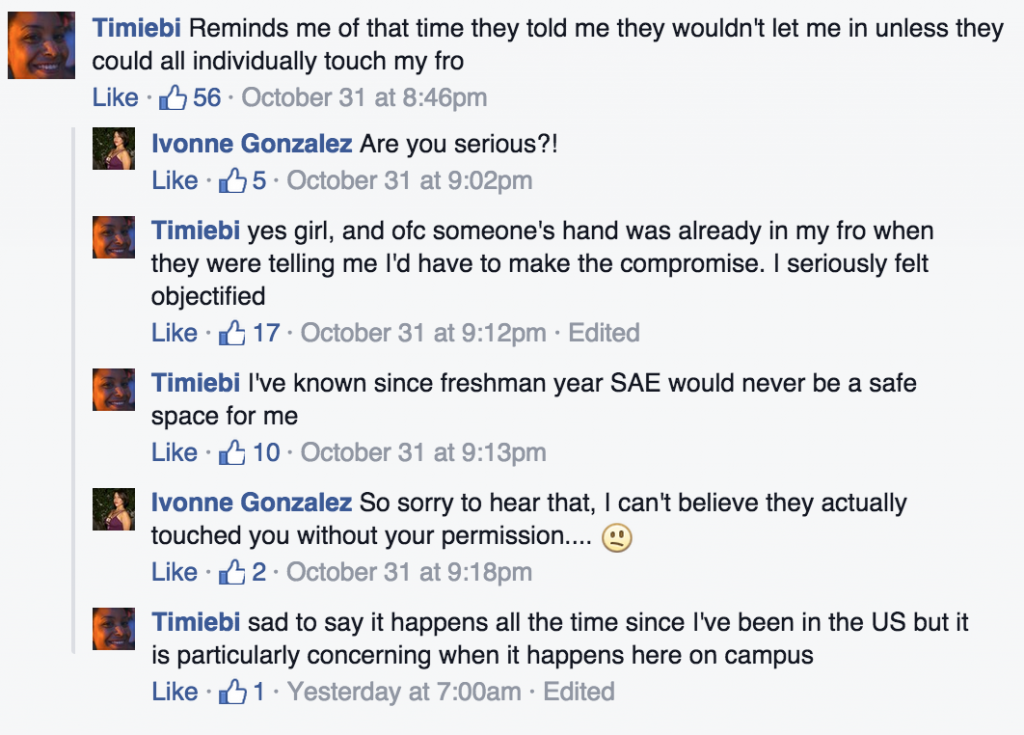 Sigma Alpha Epsilon has denied the charges of racism, and it’s not hard to see their argument. Everyone involved was most likely drunk, words might have been misconstrued.

Perhaps the house had reached full capacity and one of the groups they turned away could have happened to include some minorities.

The Tab chose not to publish the allegations against SAE when they emerged on the weekend, while seeking confirmation from eyewitnesses. Githere, whose post brought the alleged incident to light, did not attend the party and got the information second hand.

But yesterday Sofia Petros-Gouin, a Columbia freshman visiting friends at Yale over the weekend, confirmed the story, telling the Washington Post that she heard a frat brother saying “White girls only,” and observed the frat letting only blond students enter. “I was shocked,” Petros-Gouin told the newspaper. “I was disgusted.”

Plainly put, I did not experience racism at SAE on Friday night. They weren’t operating a white-girls-only policy when I turned up (I’m a red-headed Asian and had no problem), and there was some racial diversity at the party, though not much.

But knowing what really happened during the incident in question really does matter, even if the outburst came from a drunk frat boy going off-script.

The fact of it is: people need to feel safe anywhere they go at Yale, and many just don’t at SAE. No part of our university should tolerate discrimination or prejudice, or choose its social mix on the basis of race.

Serious allegations have been made, and this many people cannot be wrong. Now we wait and see what actions Yale College, and the SAE national committee, will take.