What it’s like to get an abortion in Wisconsin, by a UW-Madison student who did

‘It was one of the most painful experiences of my life’

Amy*, 20, thought her junior year would be full of the usual stresses like balancing homework, sleep and having a social life. She never expected she would be taking a pregnancy test, and she couldn't even imagine she would find herself contemplating an abortion. But that's what happened. Amy reached out to The Tab because she wanted to share her experience and raise awareness about what getting an abortion is actually like.

When did you first find out you were pregnant?

I found out I was pregnant on January 18th. I took two tests and both of them came back positive. I was a couple weeks late, but because I was on the pill I was sure I couldn't be pregnant. My ex-boyfriend, who I had been hooking up with again, came over with tests from a drugstore. Once he saw the positive result, he immediately said "We have to go to Planned Parenthood." Instantaneously, I could tell by the way he was looking at me he thought this was a huge problem.

How did that make you feel?

I was in shock, so I didn't want to be dealing with it. The next morning, I told my mom. I'm extremely lucky for the support I got from my parents. My mom told me she would support whatever decision I came to. She helped me set up a blood test to see how far along I was, so we could see what our options were. I found out I was 7-8 weeks pregnant and you can only take the abortion pill up to nine weeks and six days, so if I was making a decision I had to make it quickly.

How did you make the decision?

I didn't know what I wanted to do. My concern from the beginning was that I was continuously being emotionally abused by this guy. I had to grow up overnight, while he made all these excuses for not supporting me in any way. He would pretend his friends were suicidal or spew other really dark lies. He would tell me he was going to commit suicide, and he consistently cheated on me. I was in a dark place that I couldn't even get out of. I knew I couldn't put another life in that situation. Also, selfishly, I didn't want my life to change. I wanted to travel and find someone who loved me the way I deserved to be loved. By the time I had my first appointment at Planned Parenthood, I knew I wanted an abortion. There was not a doubt in my mind this was the right decision. 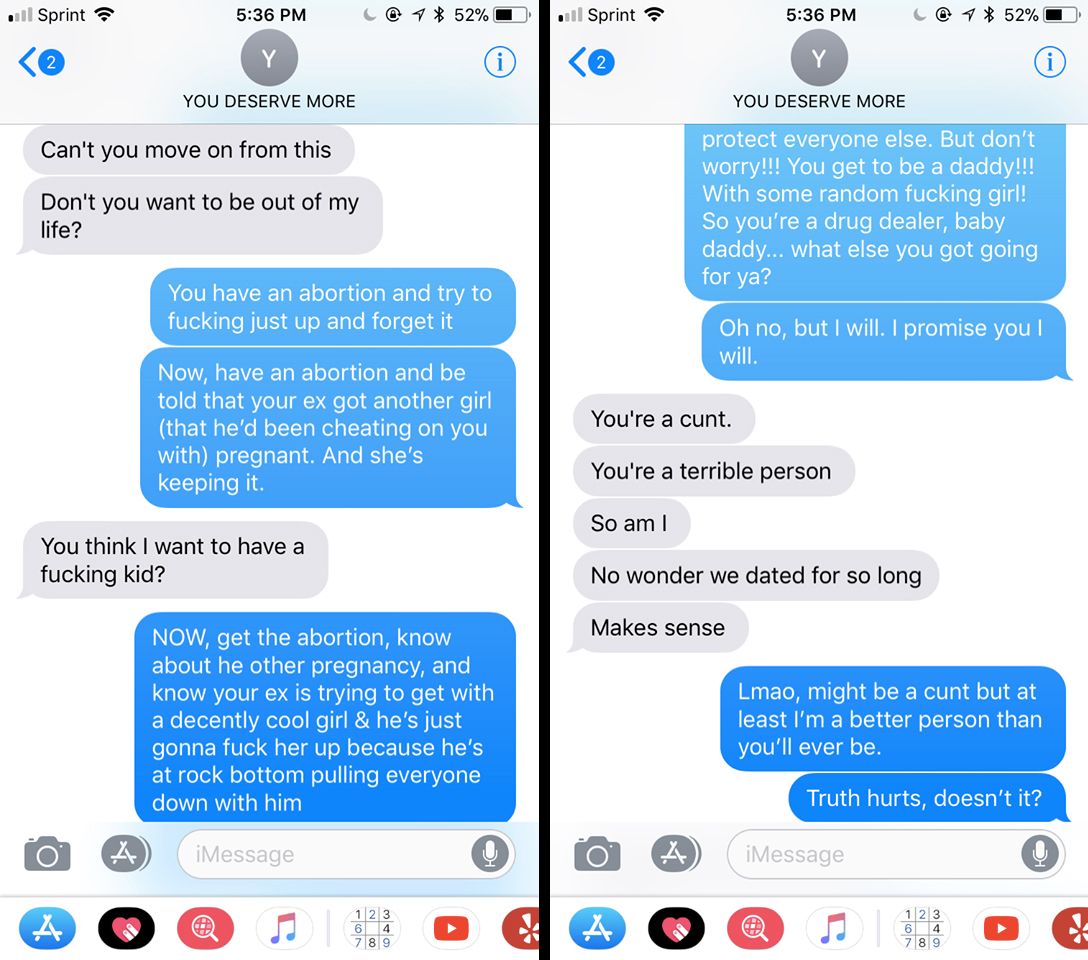 Texts from Amy's ex-boyfriend at the time

They couldn't get me in for a week and a half, and if they would've gotten me in any later I would have had no choice but to get the suction or surgical abortion, which I ended up receiving anyway. There are only two clinics in Wisconsin, Madison and Milwaukee, so I was lucky I could get in when I did. When I walked in, they handed me a booklet offered by "the state of Wisconsin", which had other options and health centers. They draw your blood and do STD testing. They do an ultrasound and depending on how far along you are they do a vaginal or topical ultrasound. I said I didn't want a vaginal ultrasound, because I didn't want to see the sonogram, but the women at Planned Parenthood said she is required by the state to show me a clear picture. She said she had to show me the sonogram, but she can't make me look at it. I looked at the screen, and she showed me a cardiovascular system that was starting to develop, and she showed me where the limbs would start developing. They also have to tell you what the chances of survival for your baby would be if it was born right now, for me it was zero. Then, you go into a room to get counseled, and they ask you a few questions to make sure you are not being forced into this and you are safe. Throughout this process you can only have one person at the clinic with you, and they cannot come in the room for the sonogram or any of the testing. I asked my mom to help with the decision as my parents would be the one helping me with recovery and she knows the party my anxiety would play in this whole process.

How did you decide which type of abortion you wanted?

I have really high anxiety so taking the two abortion pills and then miscarrying alone might not be in my best interest. So, I decided to do the surgical suction procedure. They walk you through the price of everything, what the procedure would be like and how I should prepare for it. After they counsel you they bring you in a room with a doctor, and the doctor makes you go through a packet that says every time anyone at the clinic referred to a fetus they called it a baby or a pregnancy. It's basically covering all of their bases, so the state can't get upset.

How was the next appointment?

You can bring one person with you, but they aren't allowed to be in the procedure room or the recovery room with you. I took 800mg of Ibuprofen and a sedation pill that makes you feel like you've had a couple of drinks, but they don't put you out. Then, I took one pill to prevent against infection. They wait about 15 minutes for you to digest the pills, and then you lay on a table. At first it feels like a normal pelvic exam, and then they open up your cervix, and that's when the cramping starts. They clamp your cervix open which is extremely painful, and they go in with a light suction and they put all of the contents in a bed pan and leave. It was one of the most painful experiences of my life, not in a blood-curdling pain way, but it was so uncomfortable and so deep in your body. It feels like a lifetime, but it's only 30 seconds to a minute. Though the staff is all kind, you're not able to hold a familiar hand at any point. You're escorted to recovery and given a heating pad and juice. After about 20 minutes, you rate your blood loss based on what your pad looks like. As long as it's a healthy amount, they'll let you go home with your designated driver.

And how was the recovery process?

At first I felt really good. I wasn't feeling any pain, but about a week later I started getting really sick. The amount of blood I was losing was making me feel really dizzy. I was diagnosed with an infection due to my procedure, and hopefully they will be able to clear that up, so when I actually want to have kids I can. My recovery wasn't typical, the procedure is actually really safe. However, it's not uncommon to need support even after your pregnancy is terminated and the state refuses to fund that – especially for emotional or mental health.

What were your interactions with people in the clinic like?

When we first arrived, there were protesters. It was very cold, so there were only two, but they were yelling at us. It was weird because for all they knew I was going to Planned Parenthood to get birth control or and STD test. This women walked up to my mom's car and was trying to give us pamphlets and pray for us. Planned Parenthood has a security guard during all of the hours the clinic is open, and it's messed up that part of their funding has to go towards a security guard. The women in the clinic had to say and do a lot of things that you could tell they didn't want to do, but they had to do because they were state-mandated, like show patients the sonogram, refer to the fetus as a baby, and push other options besides abortion. The worker's are so supportive and kind, but you can tell their restricted by state restrictions. This made me really mad, because I felt like Scott Walker was trying to have control over my life and body. The way they have to talk to you about the procedure made me feel like I was a problem. They made me feel like having an abortion was taking the easy way out. The system is so broken, and it sucks to feel like people believe a sack of cells has more rights than the person that's carrying it.

Was the school accommodating?

Once I got pregnant, I was so sick I couldn't even drive to school without having to pull over to vomit. When I called the school they said "Pregnancy is covered under Title IX, so we have to accommodate you, but it sounds like you're just having some morning sickness." This really made me feel isolated and alone. I ended up medically withdrawing from school for the semester.

If you had to go back, would you do it again?

I don't regret it. If I was still pregnant, I would do the same thing. There are really hard days, but at this point it was me dodging a bullet by not tethering myself to an emotionally abusive relationship. It wasn't healthy for me to be with him; I didn't want to put another life in the crossfire. It's really hard to feel so isolated and stigmatized though. I don't know who I can tell or who won't judge me. I have people who support me but there's not resources to help people who are going through this. It's tangible evidence that something needs to change in terms of women's health. If there's anything to learn from my story, it's that you're NOT alone. The clouds will clear, the sun will rise, no matter what you decide with your body.

● I ditched the pill for a contraception app, and I’ve never felt better