You call them ‘Down syndrome kids’, I call them my best friends

As I quickly developed a love for college life at the University of Wisconsin-Madison, I learned how my childhood differed from some of my peers. I grew up in a bubble.

From a very young age, Deerfield students knew that we were to do well in school, to get into a good college and ultimately have a successful career–not attending college never seemed like an option.

Compared to Deerfield, Madison seems racially and religiously diverse: my K-12 classes were filled with mostly white, Jewish kids from middle-upper class families. When I joined my sorority, my grandpa asked me if it was predominantly Jewish. When I said no, he said “good, you could use some of that in your life.”

Religious, racial and financial diversity? Not so much. Now, diverse abilities? Here is where Deerfield thrives.

The first encounter I remember having with someone who has diverse abilities was in second grade. Wilmot Elementary introduced me to my friend Leah, who continues to inspire my work with kids who have special needs. Leah had a desk in our classroom just like everyone else. She was (and still is), miraculously good at math and has the best memory. She gives the best hugs and is so kind.

Leah also has autism. Notice the word “has.” I didn’t describe Leah as my “autistic friend.” Her disability does not define her, so why, of all the wonderful adjectives that exist, would I use a diagnosis to describe my friend? Leah is a person who has autism. Identifying the person first and the diagnosis last is called “person-first language.” For example: never call someone in a wheelchair, “the wheelchair bound girl.” She is a person in a wheelchair. He is not a “disabled boy,” but a boy with disabilities. People with disabilities are human, identify them as such. 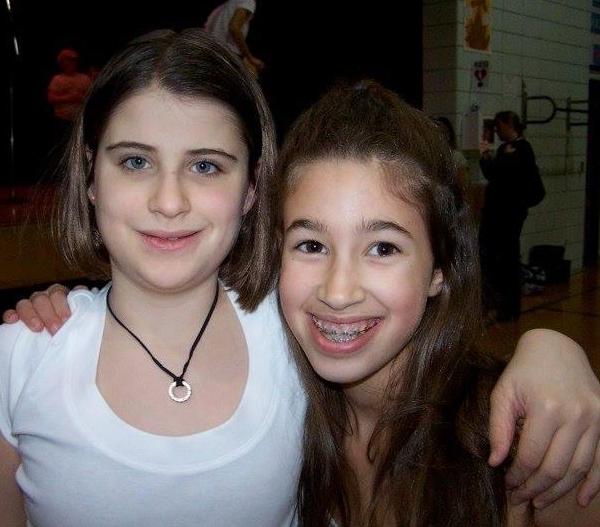 Me and Leah after our talent show performance in 5th grade

I decided to write this article because of how often I hear person-first language neglected and how people with diverse abilities are described with derogatory language. I’ve heard people use the inappropriate phrases “Down syndrome kids” and “autistic kids,” I’ve heard people underestimate their abilities to contribute to society, saying that “well obviously, only the high functioning autistic ones could participate.” This needs to stop.

Quite frankly, these phrases make my ears bleed, but the worst of all is when people use the word “retarded,” which I have heard more times than I can even count.

Let me give you a little insight into why this word offends so many. “Retarded” was once used in the DSM-IV as a diagnosis for people with intellectual disabilities. The phrase is no longer used as a diagnosis and was removed from the DSM-IV due to its negative connotations and misrepresentation of people with special needs.

So, not only are you using derogatory, outdated language when you say “retarded”, but it just doesn’t even make sense. If you are talking about someone and you said “man, he is so retarded,” you are saying, “man, he is that outdated medical diagnosis.” Sure, that sounds right.

They are far above your derogatory language or unwillingness to care. I will continue to educate people on this topic, even when the response is “I won’t change, sorry.” I will stand up for my friends and attempt to educate a population that may actually just be ignorant to the harm this word does. 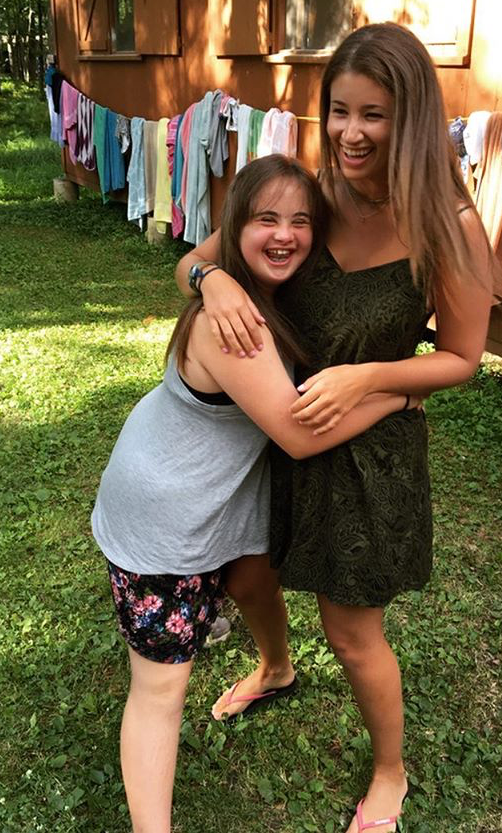 Last year I had an essay published by a school newspaper on people with diverse abilities, and they changed my wording from “diverse abilities,” to “disabled community.” Changing my wording is one issue–changing it to what I believe is offensive language, is another.

Person-first language highlights who someone is as an individual; it highlights a person’s capabilities to be successful and impactful. And that brings me to Kelly. 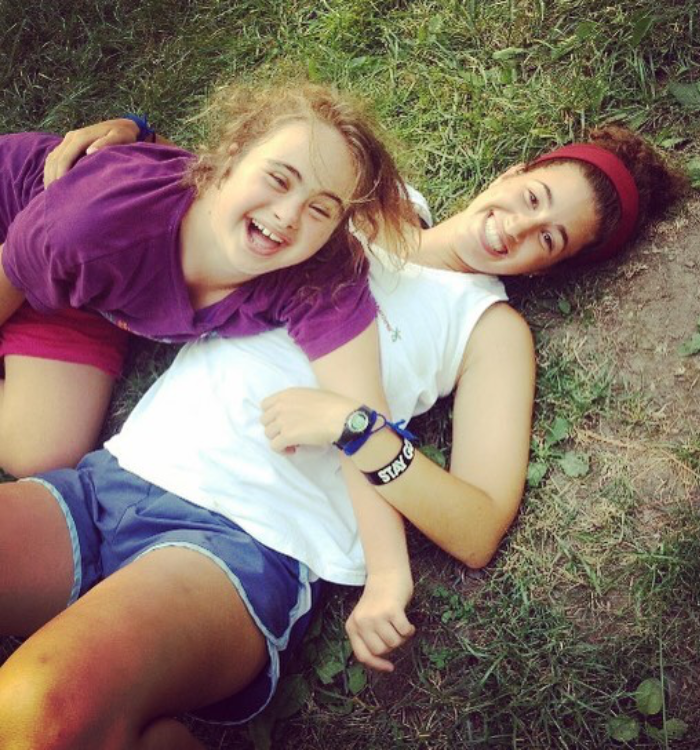 My first summer with Kelly in 2012

It is frustrating that so many people with special needs are underestimated, when they have incredible abilities to change lives.

I met Kelly as a staff in training member at Camp Chi when I was 16 and she was 12. We have been attached at the hip (sometimes quite literally) ever since.

I was placed with Kelly for four days as a staff in training member–I knew I wanted to work with campers with special needs. I never took breaks that were offered to me, because being with Kelly simply made my heart happy.

Four years later, I was Kelly’s counselor as she became a staff in training member, working with her own campers.

Kelly has a blinding smile, contagious laugh. and genuine heart. She naturally cares for other people, has the strongest sense of empathy and has unknowingly cheered me up more times than I can count. She treats everyone like a best friend. Kelly has Down syndrome. 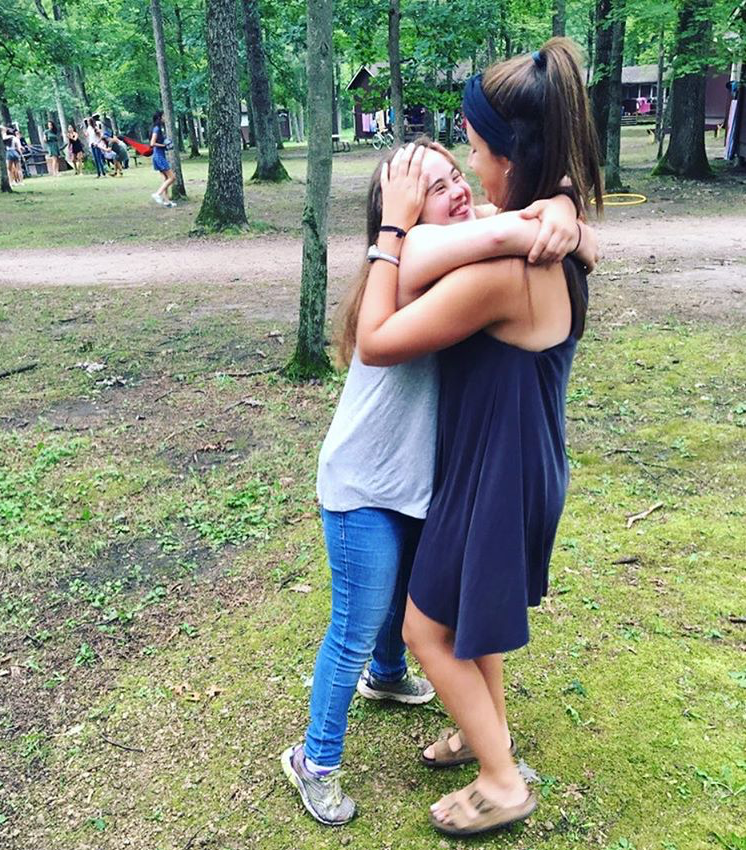 I can confidently say Kelly is a best friend to me–someone who has changed my life for the better, and makes me happier than I have ever been.

Don’t underestimate my best friend. Don’t identify her by a diagnosis or describe her by the number of chromosomes she has.

Do treat her, and all people with diverse abilities with respect. Do understand that, just because someone has special needs does not mean that he or she is incapable. Do realize that words make a difference and all people, no matter ability level, diagnosis, or biological make-up deserve to be treated with love, kindness and respect.

People with disabilities may need extra support at times–as we all do. These aren’t special needs; these are human needs.