UW-Madison students get together to protest Donald Trump’s presidency

Last night, hundreds of UW-Madison students gathered together at the top of Bascom Hill to protest our new President. Unlike most protests we have seen happening across the nation, this one was respectful, empowering, and there was no burning of our flag but rather the waving of one. 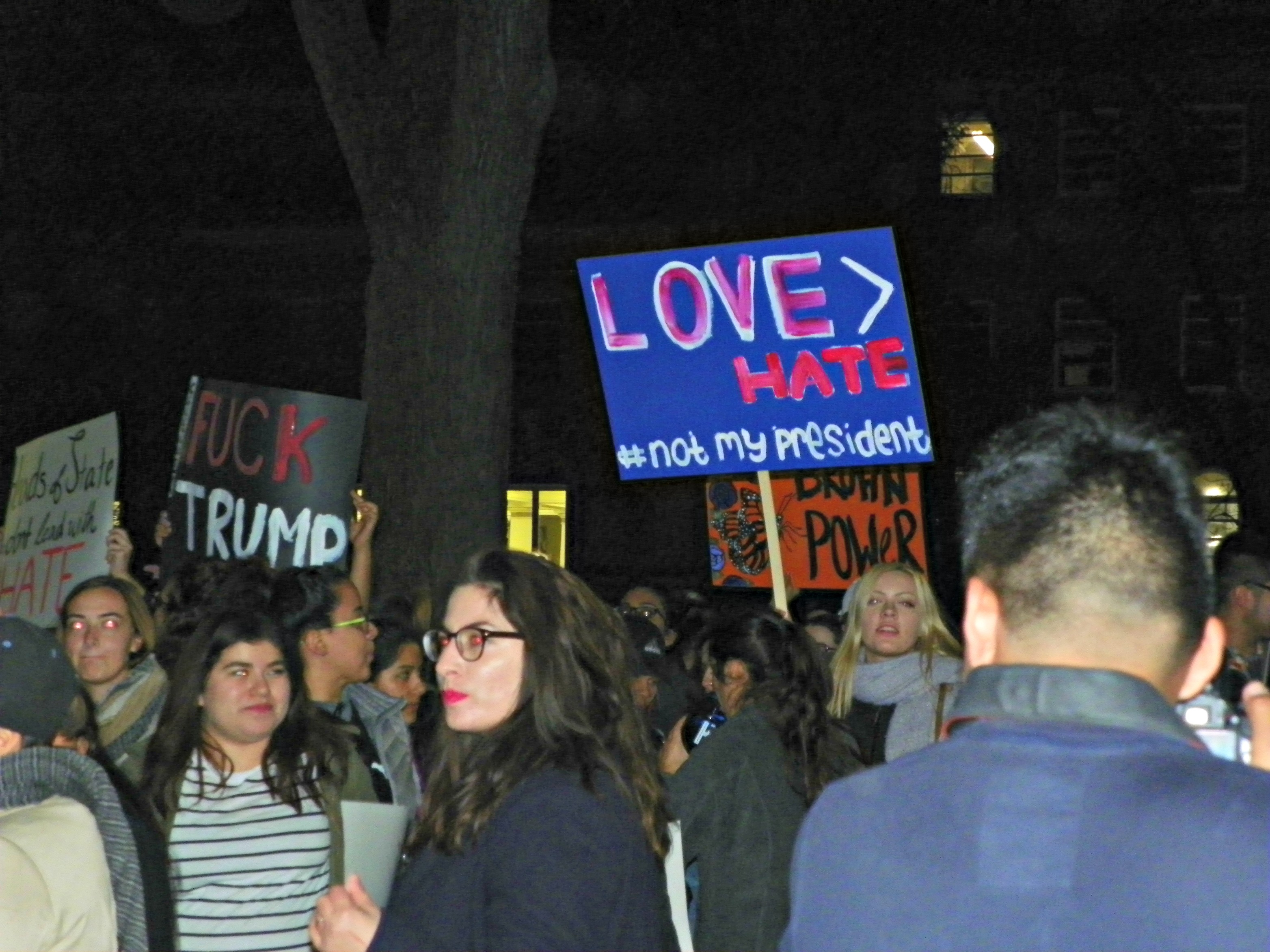 At the top of the hill, two student leaders started students off with some important messages:

“Our voice matters more than it ever has. We are the children of the revolution.”

“There is no right way to feel right now.” 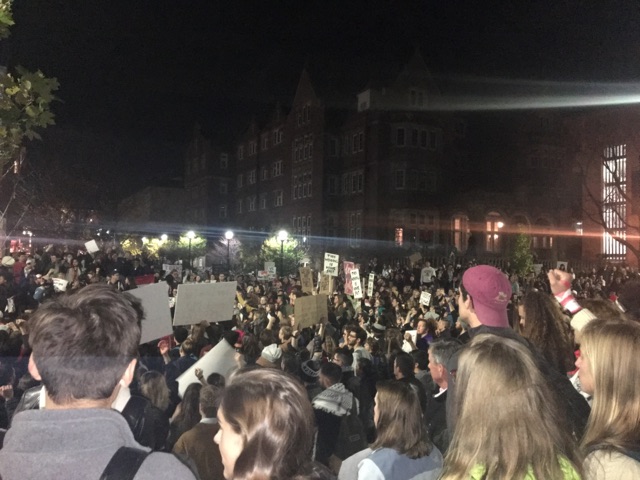 The students and city members walked from the top of Bascom, all the way down State Street, and straight up the steps to the Capitol. There was one break at Library Mall where student leaders chose to speak about justice. One student dedicated a slam poem to the Black Lives Matter Movement, while a formerly imprisoned man left us with this message: “There is no greater civil rights issue than mass incarceration of black men and women.” This was followed with the crowd chanting, “No justice, no peace, more power to the people.” 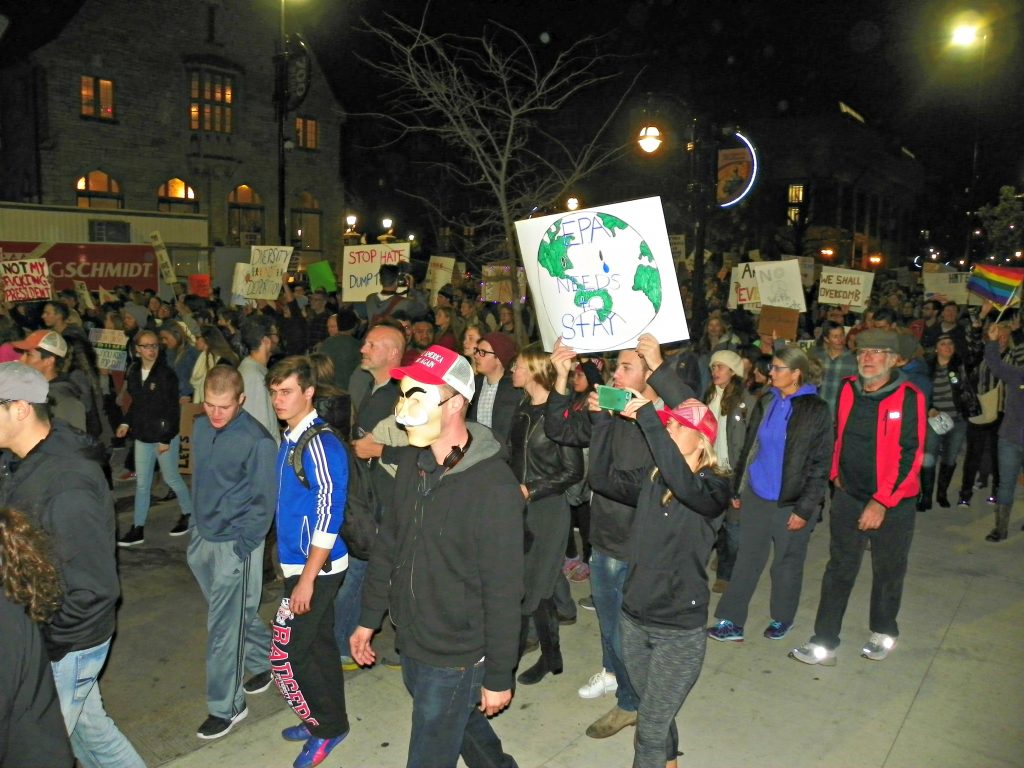 The crowd continued down State Street chanting various things including:

“This is what democracy looks like”
“Not my president”
“Black lives matter”
“No more walls”
“Love trumps hate”
“Say it loud, say it clear, Muslim lives are welcome here”
“The people united will never be defeated”
“Si se puede” 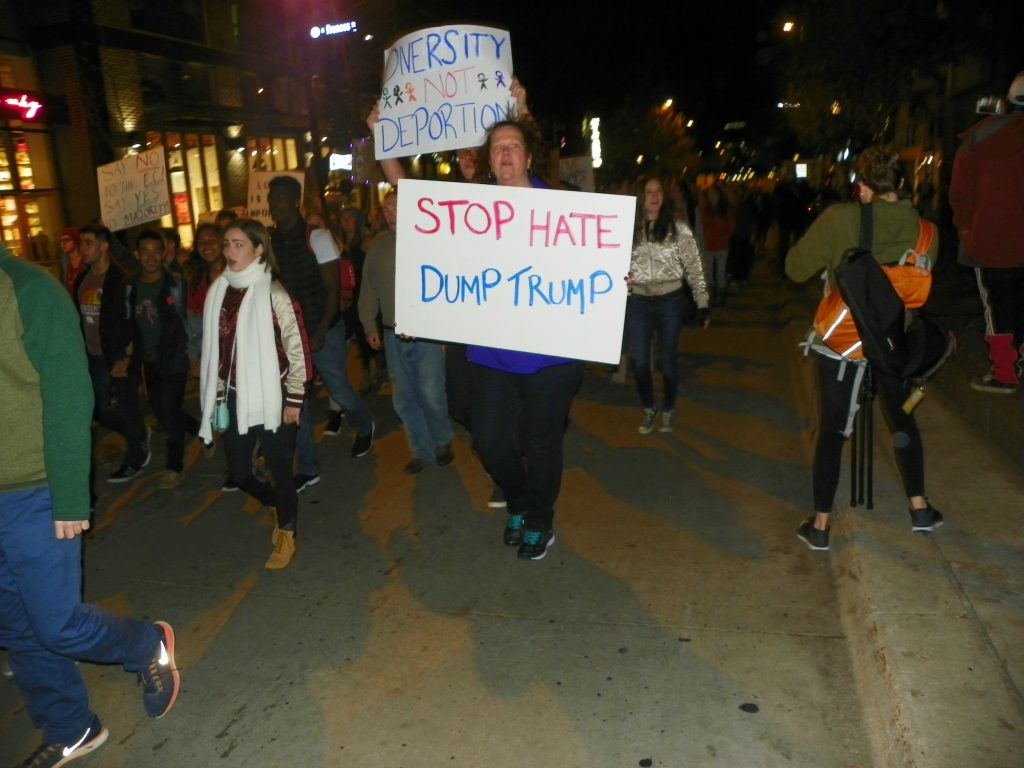 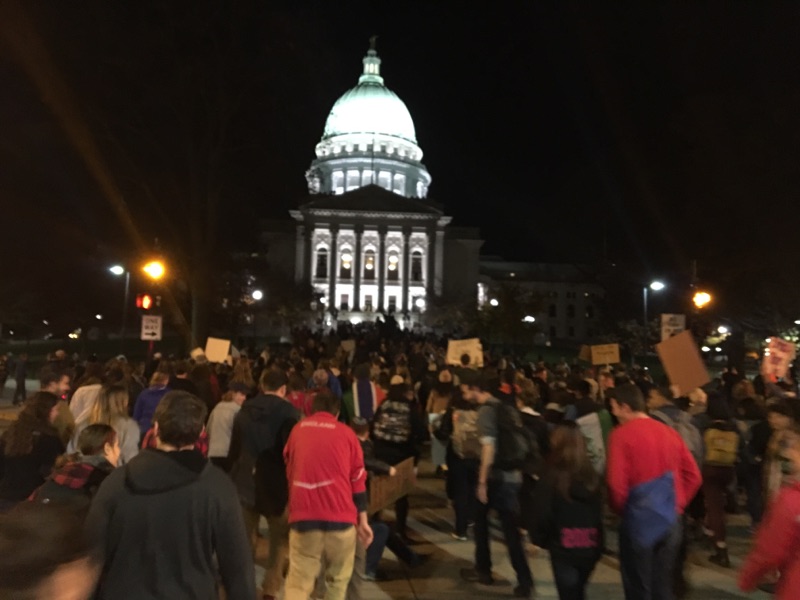 The crowd made one more stop before they marched to the Capitol and straight up its stairs. Once the mass arrived, they were all instructed to lie or sit down for three minutes of silence, to “let the world know what we represent.” 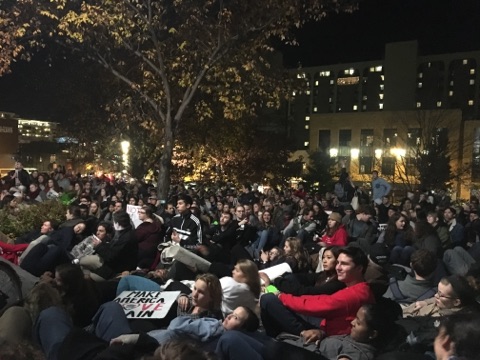 the crowd sitting in silence

More impactful things were said while everyone was gathered at the Capitol, like one mother who had to explain to her ten year old son that Trump was the new President. He replied, “Hey mom we gotta move,” to which she replied, “I’m not going anywhere.”

It was also claimed that: “Donald Trump will go down in history as the first President to start the third wave of the civil rights movement. Let the revolution begin” 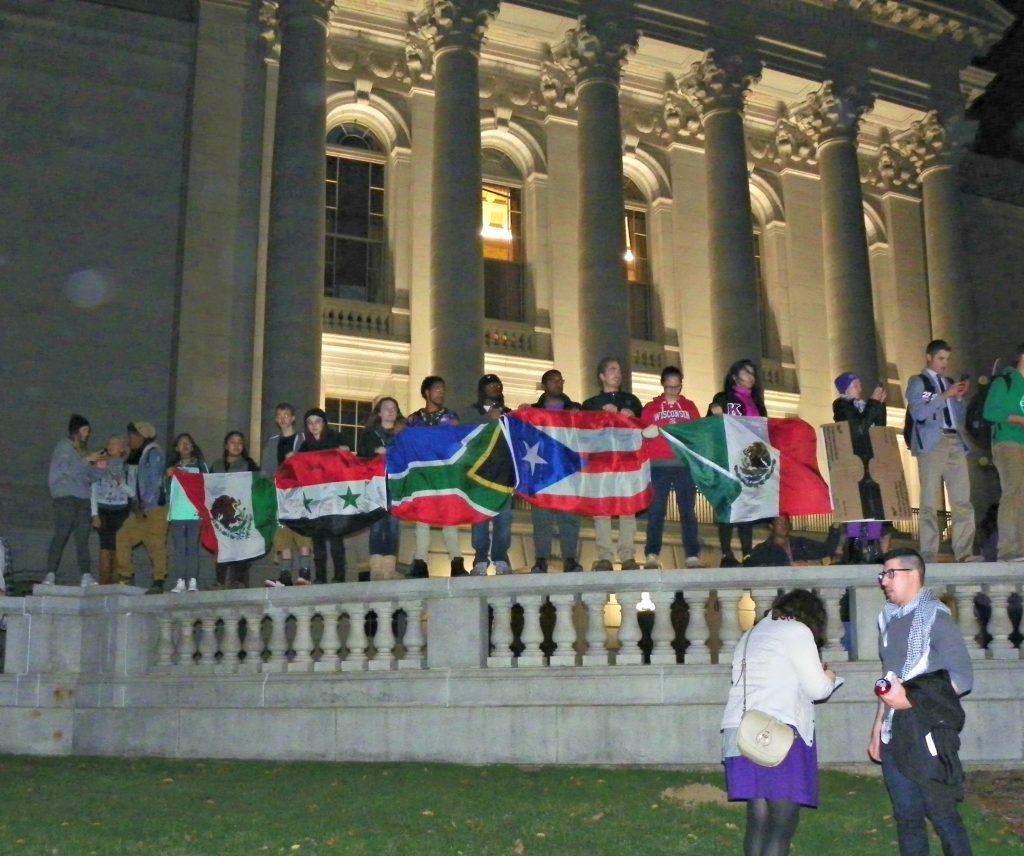 standing in solidarity at the Capitol

Another student leader proclaimed, in the midst of losing her voice, “Young people have always been the ones to start change in this nation. We have the power and we are going to make change. We will not settle. We will be the voice of our generation.” 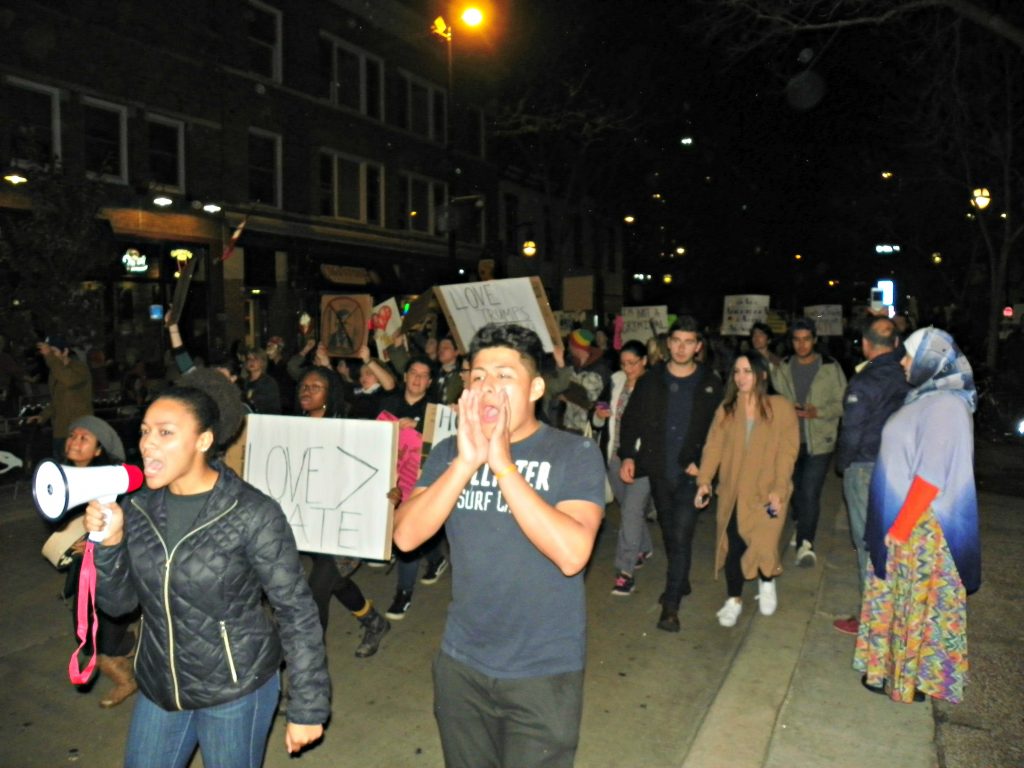 The crowd then marched back down State Street, chanting again, to conclude their protest. It is clear UW-Madison students and our city stands in solidarity with one another and is a supportive community.

Kat Kerwin, one of the organizers of this event, gave some insight on to why this protest happened and why it was so important. She said, “We protested for a couple of reasons, at the forefront, to cope with our grief. Many of us organizers were either volunteers on the Clinton campaign, and some other organizers are marginalized students. We needed a way to rebuild, and this was the only way. Additionally, we made a few demands: 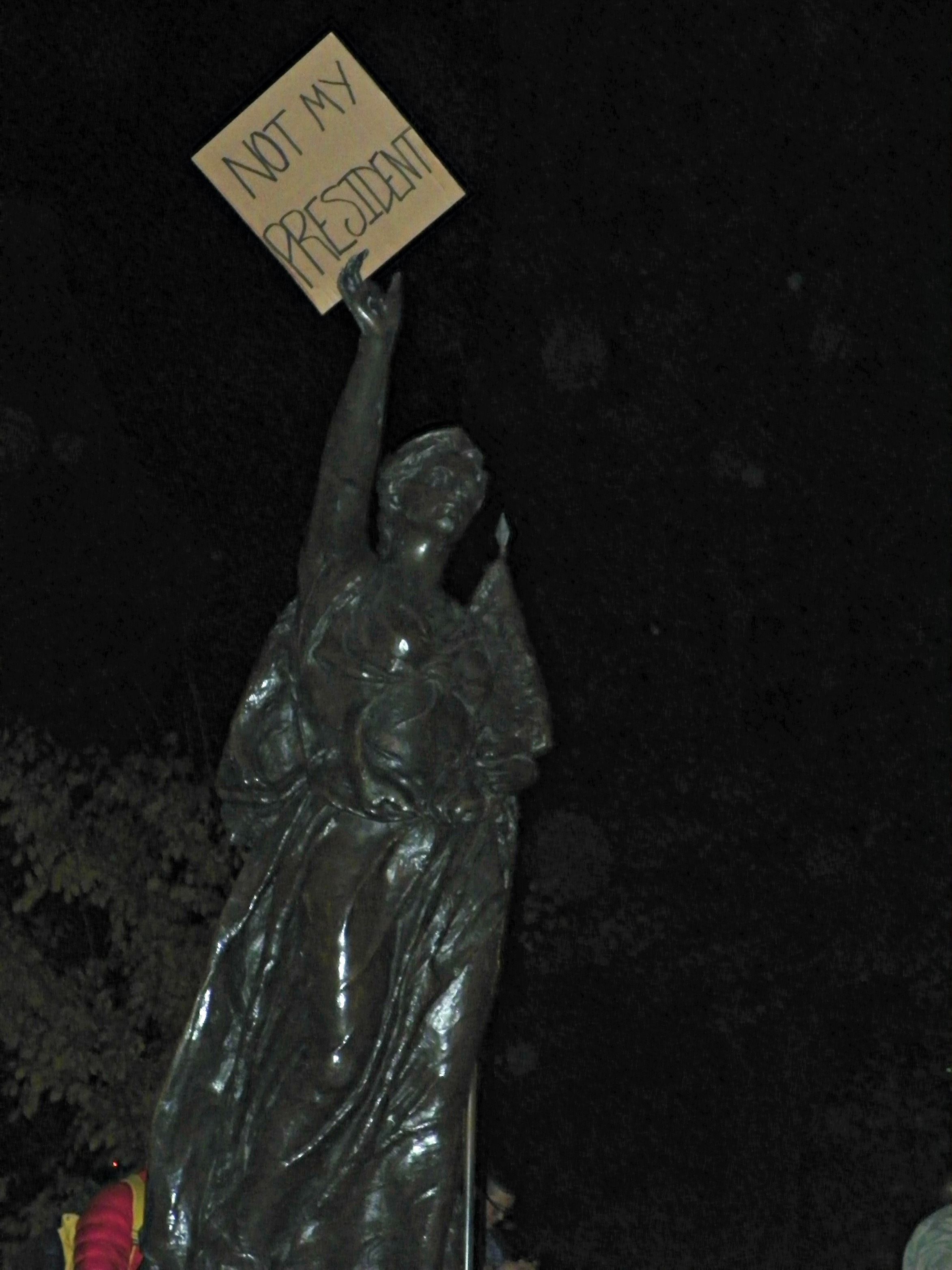 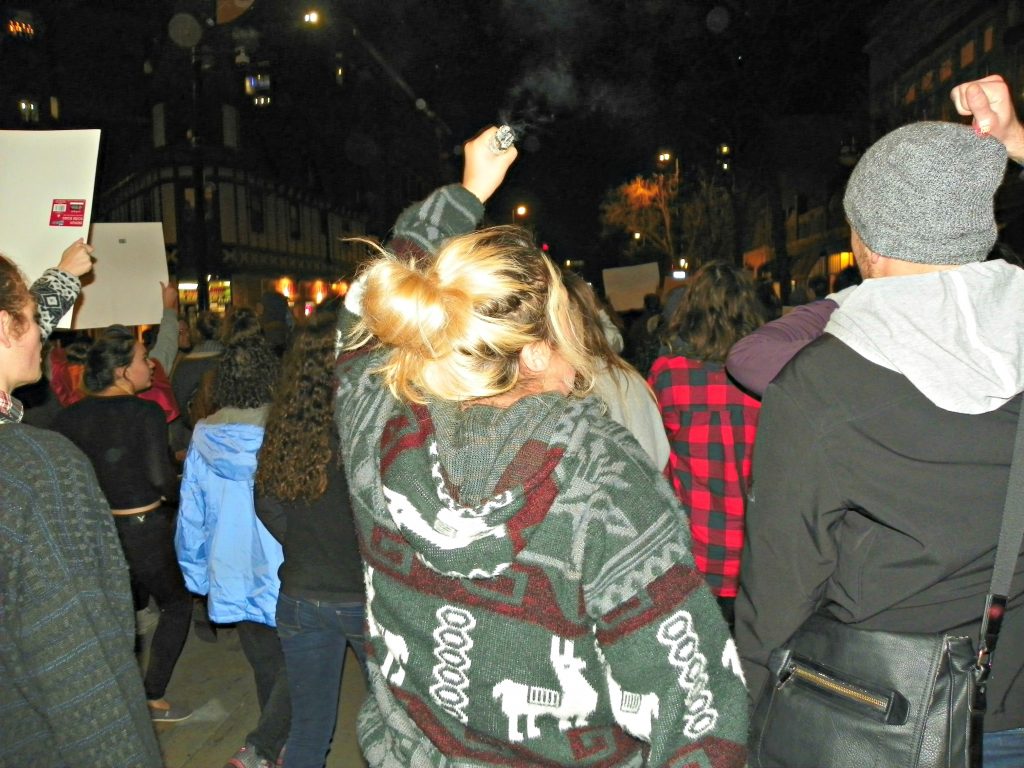 While it is evident the entire crowd was unhappy with the president-elect, it is also clear  they ask for support more so than a recall. This diverse campus has been shocked with fear, but that will not stop them from fighting. The main thing they ask for is the support and equal rights of all people is upheld, rather than taken down. “Unify the nation, and let the revolution begin.”