‘She was truly an inspiration to so many.’

Two weeks ago, the Virginia Tech community lost the beloved Paige Neubauer in a tragic accident. Since then, all who knew her have banded together in support to carry on her memory in every way possible. Friends, family, the sorority of Delta Gamma, the employees of Hokie Grill and Co., and even strangers have mourned the loss.

When asked what comes to mind when she thinks of Paige, her close friend Kristen Hornbaker immediately said laughter. “We were always laughing and she would turn everything into something positive.”

Kristen reflected on a few memories she had with Paige. They went dancing together on salsa nights downtown at the Sycamore Deli, had a blast on the slide at the Diplo concert, and sang along to Spanish music in the car (even if Paige was the only one that knew the words).

Kristen met Paige when she joined Delta Gamma. After they got close, Paige helped her get a job at Hokie Grill and Co. and they began working together as cashiers as well. Paige was known there as being one of the sweetest cashiers. There were several people’s whose lives she touched and days she improved without even knowing. 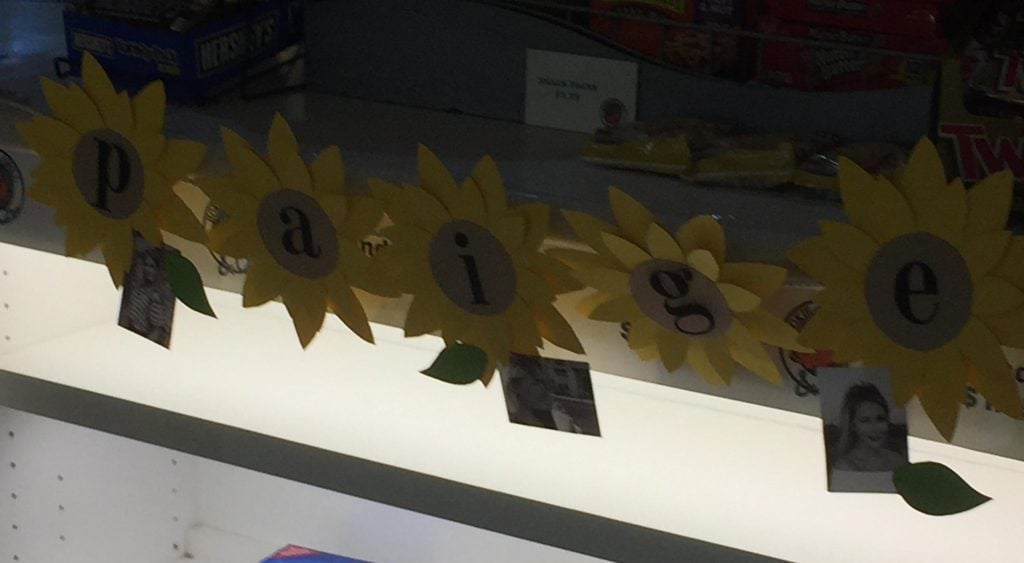 “I didn’t know her personally, but I would always go to her check out line,” Megan Walter, junior, said. “Even if it was a long line [that’s where I went]. She would make my day and she was so happy and pleasant. I hoped I could give just as friendly of a smile as the one she gave me and everyone else she met.”

Hokie Grill and Co. employees have made pins with sunflowers on them to be worn by staff in remembrance of Paige. It reads “In Loving Memory of Paige Neubauer.” The pins have been worn every day since the tragedy.

Delta Gamma has been highly active in upholding Paige’s memory. They held a memorial in her honor the Sunday following the accident. Caroline Cogan, the sorority chapter president, had been working with Virginia Tech to organize a campus-wide memorial service at the end of April. The sisters are currently creating and t-shirts memorializing Paige along with rubber bracelets that will be sold in order to raise money. In addition to the sales profits, Delta Gamma is also accepting donations. The money raised will go to the Peace Corps.

“[Paige was so passionate about [the Peace Corps]. She was an ambassador for them and she was going to join after college,” Hornbaker shared with us.

Already missing Thanksgiving with the family. Even if grandma is a bit racist… #stopinappropriategrandmas2016