The student suffered no life-threatening injuries, but has a sizable medical bill to pay

This past weekend, junior Chris Elmer, a cadet at Virginia Tech, fell from the top of the Cascades, a 67-foot drop. He and four others hiked the two-mile trail to the waterfall and climbed to the top of the rocks.

After having their fun, Elmer turned around to walk away from the edge, but slipped and fell to the bottom. He tried catching himself, but the slippery surface and rushing water made it impossible. Elmer hit two rocks on his way down and landed on the hard surface below.

Thirty standers-by rushed to his aid, including an experienced nurse who directed how to stabilize Elmer. Many used the shirts off their backs to help keep his body temperature at a healthy level. Two hours passed before emergency crews arrived to carry him out. He was then airlifted to the hospital. 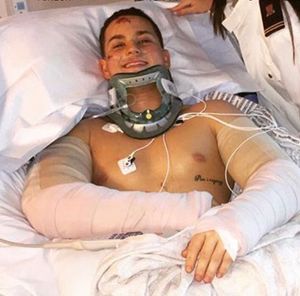 Elmer has already gone through a series of surgeries, and according to his friend Jake Voorhees, he is expected to recover without brain or spinal damage. He will have to undergo a long recovery that includes a month (or more) of bed rest. His friends posted on the Tilt website, pleading for donations to help pay off his medical bills. Within eight hours, they surpassed $10,000.

The Giles Lifesaving and Rescue Squad responds to a dozen falling accidents at the Cascades a year, and continually discourages people from swimming in the water, although it is not prohibited. After two drownings last year, more signs were placed to warn visitors the dangers of the Cascades.