Born with only one arm, meet the VT student shattering expectations

Four-sport athlete and budding musician, what can’t he do?

Andrew Young does not attach a broken spoon and a rubber band to his arm to inspire the world, he just wants to play music.

“Andrew helps whittle away at those misconceptions just by being who he is,” said mother, Amy Young. “Andrew’s successes – academic, social and physical – cause people who encounter him to challenge their own thinking and recognize that differences are just that – differences.”

Raised in the suburbs of Prince William County, Andrew grew up in a sheltered, suburban neighborhood filled with bicycle races, basketball hoops and backyard football. As a five-year-old, his world was not filled with Pokémon cards and rug burns; he had much larger issues. Andrew was born missing half of his left arm from the elbow down.

According to the Centers for Disease Control and Prevention, every four and a half minutes a baby is born with a birth defect in the United States. In total, about 120,000 babies are born with birth defects each year.

“We started the prosthetic process when he was just 11 weeks old through Shriners Hospitals; first at their hospital in Springfield, Massachusetts, and then in Philadelphia after we moved to Virginia in 2007,” Amy said.

Andrew has had several prosthetics made over the years: a hook, a “cookie crusher,” body powered arms and myoelectric arms. While he used them heavily as a child, he rarely uses them anymore. “As a matter of fact, I don’t think that he brought any to Virginia Tech with him,” Amy said.

The myoelectric arm made for Andrew is an advanced prosthetic that mimics human anatomy through signals from muscle fibers in the upper limbs. One of his prosthetic arms even included an attachment for a guitar pick. “I’ve had multiple prosthetics made for me but none of them have been better for playing guitar than my broken spoon and rubber band,” he said.

Andrew wasn’t always as confident in himself as he is now. From fifth to 10th grade, he wore long sleeves year-round in an attempt to hide that he was different. “It was really tough growing up because kids would treat me differently, and I know they didn’t do it out of malice, but they would look at my arm because they had never seen anything like it,” he said. “That was really the hard aspect of growing up, just being able to live down the stares.”

In high school, Andrew was a four-sport athlete in cross country, track and field, football and baseball. He was a Battle of the Bands winner, and taught himself how to play drums, guitar and bass guitar using a broken spoon and a rubber band as a strumming mechanism. 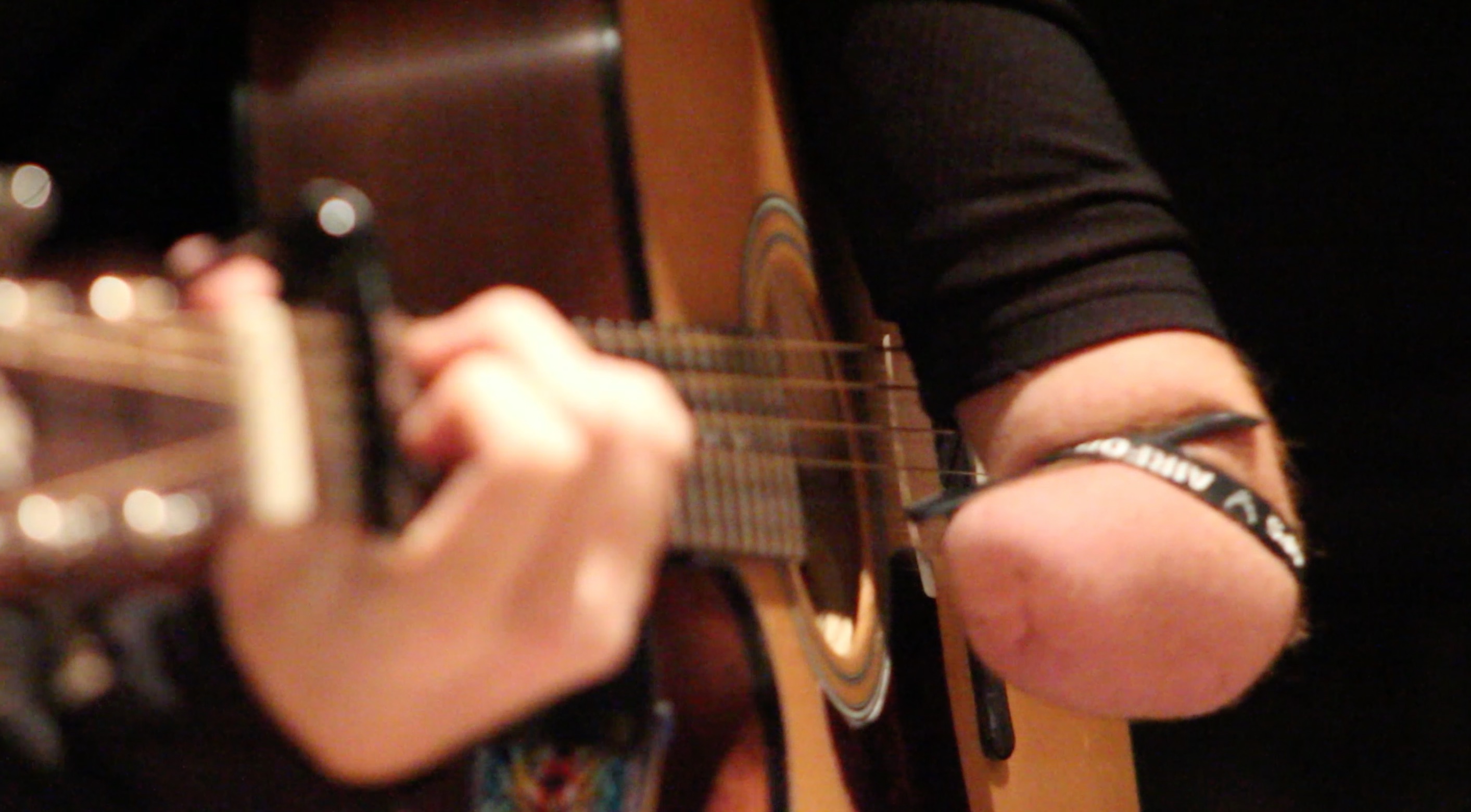 “I was just sitting on the couch one day and thought, I want to learn how to play guitar,” he said. “I snapped a plastic spoon in half, grabbed a rubber band, and that was it.” This innovation lead to his dream of being a full-time musician.

Andrew will perform any chance he gets because he believes that his window is closing. “I’m in college, I’m almost 19, and most people get signed by the time they’re already 18. I know my Hail Mary dream is fading, but I play music to keep me happy.”

When it comes to song writing, he draws inspiration from quiet moments of self-reflection. His signature song “6 a.m.” begins with the lyrics “I wanted to change all the things inside I hated.” He explained that the lyrics embody his constant drive to better himself, and to push beyond what society says he cannot do. “I know my place, but I don’t like that place,” he said.

Andrew doesn’t want his accomplishments to come with asterisks. “What makes me so mad is when people say ‘you only won battle of the bands because you’re missing half an arm. ‘No, I want to accomplish things because I earned them.”

Following an open mic night at Battlefield High School, a mother and her son approached him. The mother asked if he taught guitar lessons, as her son wanted to learn to play like him, an offer Andrew graciously declined.

“I saw the awe and admiration on that child’s face, and I knew that Andrew had just inspired someone to follow a passion of theirs, no matter what gets in their way,” Kirsten DeZeeuw, Andrew’s girlfriend of three years, said.

Kristen is one of his biggest advocates. “He showed me that there is more to life than what my circumstances allow me to believe,” she said. “Andrew showed me what can be accomplished with hard work and dedication, no matter how unattainable my goals may seem.” 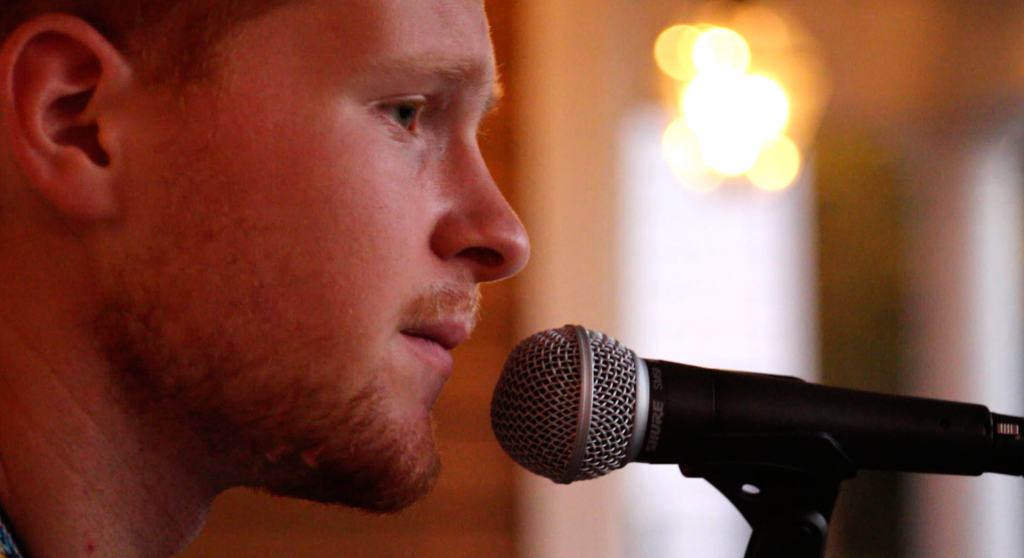 Andrew’s desire is that he is looked upon no differently than anyone else and he won’t look down upon anyone in return. “Even though it seems completely ordinary, Andrew always makes sure to hold the door for others. It does not matter if the person behind him is eight or 80,” Kristen said. “I know it seems trivial, but I believe those simple acts of kindness define who he is.”

A substantial part of Andrew’s support system has always been his parents. “My parents would always push me, they would never take no for an answer,” he said. “I’m sure, at some points, in their heads as my parents, they probably doubted me because they’re human and imperfect, but they wanted to push me because they are great people and great parents.”

“I think that as a culture, we tend to hold the belief that people who are physically ‘outside the norm’ also have decreased cognitive abilities,” Amy said. “By Andrew just being Andrew, he continually challenges and breaks down people’s ideas and stereotypes of people with differences as being ‘less able.’  I have seen and heard about it since he was born.”

Drew Young, Andrew’s father, is currently overseas on deployment for the US Army. To support his future, Drew gave his own G.I. Bill to Andrew for his college education.

A big barrier for Andrew was in athletics, which he commends his parents for their encouragement. “I was cut from my high school baseball team my sophomore year. Not because I had one hand, but because I couldn’t get around fast enough with a drop three bat. That winter I worked, and that spring I tried out for my local travel team and was the leading hitter for the season.”

“Part of me wants to be that jerk who says, ‘I won without a hand,’ but I also just hate failing,” he said.

Andrew runs almost every day, training for his first marathon. “I run now because music isn’t big in Blacksburg so it doesn’t make me different, so now I can say I’m different because I am a good athlete.” 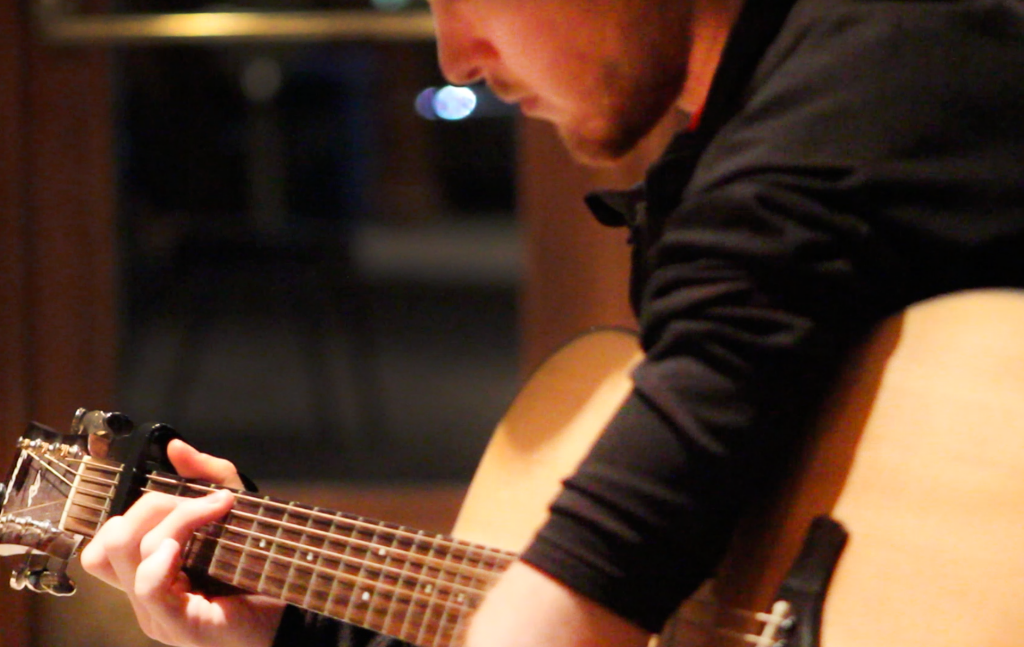 He acknowledges that he is his own hardest critic. “I think a lot of the tough times have involved me being hard on myself. I know I can’t be a full time musician unless I’m really special, and I feel that I am in some ways. Not because of the music I play, but on the message I put out and the show I put on.”

“I definitely fear failure, but it makes victory all that sweeter,” Andrew said. “I’m always pushing myself to do better because I want to feel like I’ve done something exceptional.”

He is the first to admit he needs to accomplish something extraordinary to feel comfortable with himself. He finds comfort in distinction, spurred from having to overcome obstacles just to participate in normal activities.

“I see Andrew as someone who quietly changes people and, in turn, will change the world,” Amy Young said.

From opening pickle jars to being a four-sport athlete, Andrew sets no limits on what he can do and the impact he can make on the world.