People are going mad for the Hoops Mania black market

‘Selling one Poland Spring water bottle for $125, it also comes with a Hoops Mania ticket’

Villanova’s annual “Hoops Mania” event will take place in The Pavilion on Friday. The widely attended event is marks the heavily anticipated start of basketball season and with the demand for the event being so high, tickets are awarded through a lottery system.

Among the highlights of the evening is a team scrimmage, student shooting competition, screening of a team promotional video, and of course, a top-secret performance from a popular performer. Past performers have included Nicki Minaj, 50 Cent, T-Pain, Trey Songz, and others.

However, this year, in the wake of the NCAA championship, demand for tickets is higher than ever, creating more black market sales and drama than ever before.

With demand so high, students like  Thomas Plonski, a senior, were granted a less than 5% chance of being ticketed for the event. Plonski believes the ticketing system is “rigged.”

“All they would have to do is divide the number of applicants by the number of tickets to get an accurate percentage,” Plonski told The Tab.

Now that the lottery results have been released, demand for tickets is continuing to skyrocket. There is an influx of desperate pleas for tickets in Facebook groups, and in true entrepreneurial spirit, ticketed Villanovans are willing to oblige…for a price.

One university senior, who asked to be kept anonymous is selling his ticket for $125. He told The Tab: “For me if I have something of value, and it’s more valuable to someone else than it is to me, I’m going to sell it.

“If I were in a position where money wasn’t a concern for me, I would love to transfer it for free, but that’s not realistic.”

Not everyone shares his view. Another senior, Christal Tyson, posted the following message in a closed Facebook group for the class of 2017: 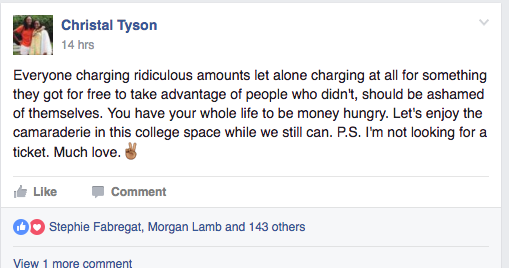 Christal wasn’t shocked to see the passionate range of responses to her comments, “I wasn’t surprised at the backlash because if they think what they’re doing is right, my one post wouldn’t change that too much. I just wanted to make people think,” she told The Tab.

“I respect people trying to make money because let’s be real, who doesn’t love a having more money, but it seems unnecessary in this situation/ environment.

“We’re all at Villanova just trying to have a good time, so if you can’t go to Hoops, don’t try to penalize your peers for not getting ticketed,” she said.

Another senior, Michelle Ahn, joined the conversation with the following post: 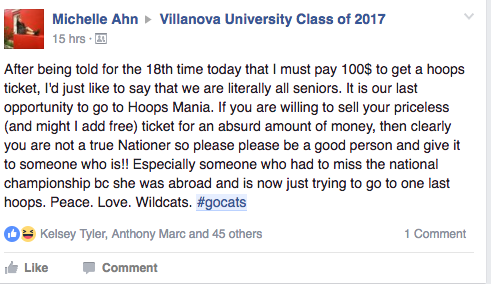 “What especially infuriates me is people who say things like ‘have you ever taken an Econ class?’ I am an Econ major I just also happen to have ethics and love for the nation.” Michelle told The Tab.

Darryl Reynolds, a senior on the basketball team, is disappointed to see the drama surrounding the event, he said:”I honestly think everyone should be able to go to Hoops Mania, even if it’s standing room only.

“Although it’s not right, I respect Nova Nation’s passion, you gotta commend people who just make a way.”

Senior Adam Schreck works for the office of athletic facilities and conceptualized one possible solution to the problem: “I think that if the school decided to sell Hoops Mania tickets for a small amount like $10-20 a few weeks prior to the event there would be far less backlash since everyone at Villanova would have the opportunity to buy a ticket,” he told The Tab.

However, ideals like these are merely fantasy, and as the event approaches, students willing to sell are driving up prices higher and higher and are finding increasingly creative ways to barter. One sophomore, Natasha Duffin, said “my friend sold a ticket for $150, a handle, and a swipe to the spit.”

Though students like Michelle Ahn and Christal Tyson would likely condemn demands like these as petty, you have to admire the students’ willingness to equilibrate the market for tickets.

After all, Bloomberg ranked us the #1 undergraduate business program for a reason, and if this drama has taught our community anything, it’s that you truly cannot put a price on Villanova Basketball.