Sitting for the national anthem isn’t unpatriotic, it’s a right

Let’s address the giant, oppressive, red, white, and blue elephant in the room

I don’t remember learning the Pledge of Allegiance. It’s funny, really — I have every word of it burned into my memory, but I can’t recall the actual learning process. Then again, why dwell on the learning when what’s important is the knowing, right?

From the time we entered kindergarten to our last days of middle school, my classmates and I were made to recite the Pledge every morning of every day, facing the flag with our hands over our hearts. There was never any question as to why we did this. It was definitive; absolute; almost compulsory. As a child, conformity was the norm. It was never brought to anyone’s attention that there was a choice. I almost felt like I was carrying out my duty as an American citizen, because why shouldn’t we have been celebrating the greatness of our country?

What would the consequences have been if I, a child still in my single-digits, had refused to stand? Would I have been forced to stand anyway? Would I have gotten detention had I continued to refuse? Would my parents have been notified? Would my face have been splashed over the front pages of local newspapers with the headline “Third-grader denounces the Pledge of Allegiance, brings shame to America?”

In 1935, two students from Pennsylvania were expelled from their school. Reason being? Failure to salute the flag and recite the Pledge of Allegiance. At the time, there was never any concrete law stating children had no choice but to stand and recite the pledge — there was just an overwhelming wave of nationalistic, monotheistic pressure emanating from old, white, male government officials.

In 1940, the Supreme Court ruled that public school students would be required to swear the pledge and in 1943, that ruling was reversed completely. Somewhere in between those rulings, however, the US managed to relocate and incarcerate thousands of Japanese descent, all while forcing Japanese-American children to swear a pledge that preached “indivisibility,” “liberty,” and “justice.” Oh, the irony. Or rather, hypocrisy. 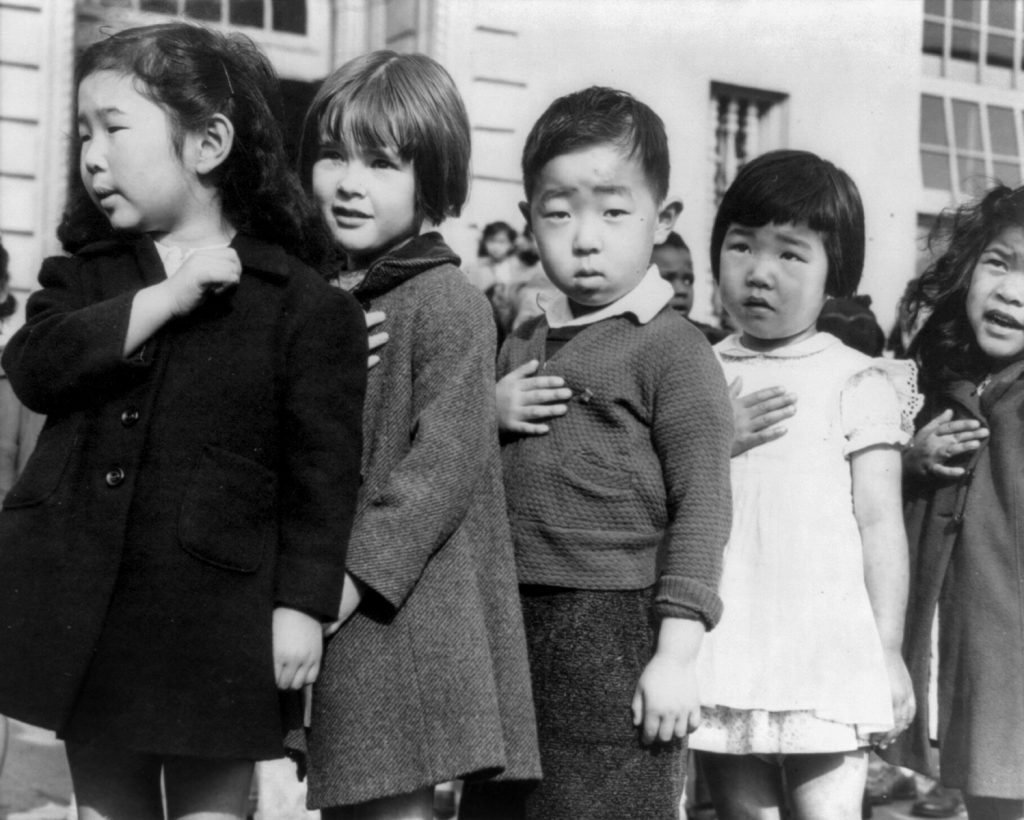 Students of Japanese descent recite the Pledge of Allegiance in 1942.

For what values does the flag stand today?

Equality? Ideally. Liberty? Nah. Justice? Not so much.

American quarterback Colin Kaepernick recently took a very bold and very public stance, choosing to remain seated during the playing of the national anthem. His reasoning? “I am not going to stand up to show pride in a flag for a country that oppresses black people and people of color. To me, this is bigger than football and it would be selfish on my part to look the other way. There are bodies in the street and people getting paid leave and getting away with murder.”

The real crux of the matter is, he’s not wrong. Never mind the fact that the Star Spangled Banner was written by an American slaveholder who believed black people to be “a distinct and inferior race of people, which all experience proves to be the greatest evil that afflicts a community.” As Kaepernick correctly asserted, this is bigger than that. 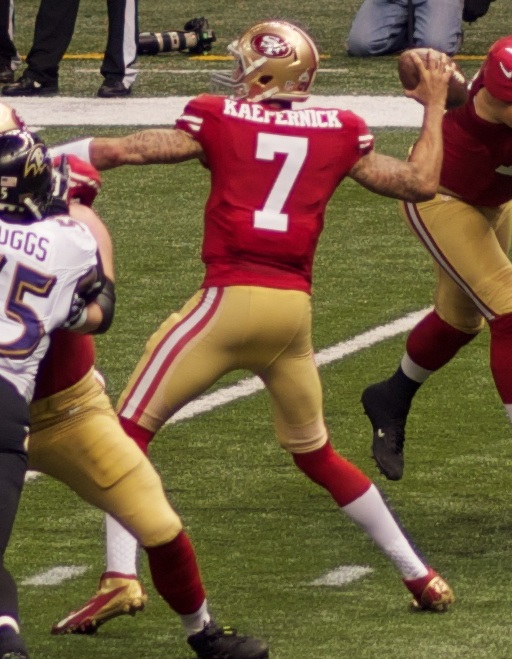 Kaepernick, as well as others who choose to abstain from the pledge, does not suddenly represent an anti-American movement. This isn’t about any one cop or any one innocent victim, and this isn’t an attack on those who truly believe this country’s flag upholds the values to which every US citizen should aspire — this is a reality check, because somehow, while all of those land-of-the-free, home-of-the-brave principals are being upheld, there are innocent people being shot in the streets, convicted rapists getting off with 3 months while marijuana users get sentenced for life, and this country falling victim to its own history of systematic oppression.

Let’s put down our torches and pitchforks for a moment. Let’s tone down the finger-pointing. Let us, if only for a couple minutes, contemplate what it means to be free, to be just, and to be equal.

The fact that black men and women walk the streets of their own neighborhoods in constant fear is not freedom. The fact that only three percent of rapists serve jail time in this country is not justice. The fact that Latino immigrants are labeled as rapists, killers, and criminals by a man who hopes to soon become president is not equality.

Who are we, in all our American pride and glory, to decide for a man of color what this nation’s flag represents to him? If we are so concerned with the “misrepresentation” of our country’s values, we need to give people a reason to stand — not a reason to remain seated.

There is a giant, oppressive, red, white, and blue elephant in the room. The question is, do we simply let it be and pray it doesn’t crush us? Or do we rally together and use our collective strength to scare the ever-loving shit out of said elephant and send it running for the hills?

It isn’t about accusing every cop in sight of being a murderer and a perpetrator of injustice.

It isn’t about sending a massive “FUCK YOU” to the American establishment in the form of colorful language and a few middle fingers.

It isn’t about changing the the actual Pledge of Allegiance. Although, if it was, I already know exactly what the new wording would be:

“I pledge allegiance to a United States of America that stands, as one nation, under the values of indivisibility, liberty, justice, and equality.”

Something has to change, and that change is set in motion when one man decides our flag should stand for something greater than police brutality, white supremacism, and racial oppression. Change takes time and a hell of a lot more people than a single football player.

So for now, if our moral compasses allow, let us take a collective stand by, well, collectively sitting down.