Austin Nichols Will Not Return to UVA Hoops

Coach Bennett confirms, ‘Austin will not be back next year’

Coach Tony Bennett has officially shut down any rumors of an Austin Nichols return to the UVA basketball program.

“Austin will not be back next year,” Bennett said on his radio show Monday. “That’s about as clear as I can be about that.” 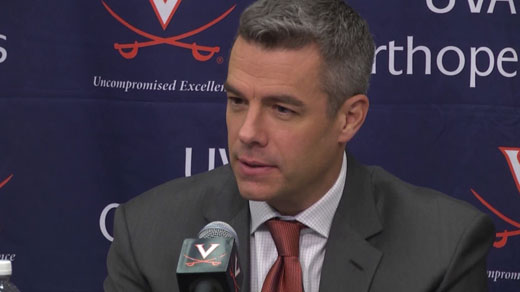 Nichols, the 6-foot-9 Memphis transfer, was poised to serve as one of the Cavaliers’ top players this season. After sitting out the 2015-2016 season along with this season’s two preseason scrimmages and the opener against UNC-Greensboro due to NCAA transfer regulations, Nichols finally hit the court for the Wahoos’ second game against St. Francis Brooklyn. However, Nichols’ UVA basketball career was cut shockingly short when an unspecified violation of team rules led Coach Bennett to show him the door after just one game.

Coach Bennett did not comment on the details of Nichols dismissal from the team on Nov. 18, but he did provide the following statement via a press release from the University’s Athletics Department.

“It’s a privilege to be a part of this program and Austin has lost that privilege,” Bennett said. “We have standards for our student-athletes and when those standards aren’t met, there are consequences and this is the unfortunate consequence.”

Nichols’ absence would not go unnoticed. Coach Bennett had won out against various prominent suitors including Duke, Kansas, Notre Dame, and Wisconsin to sign Nichols, who was predicted to be a key forward for the team. During his sophomore year at Memphis, Nichols scored an average of 13.3 points and 6.3 rebounds per game. At Virginia, he showcased his enduring talent by scoring 11 points and grabbing 3 rebounds against St. Francis Brooklyn in what was to be his final game. Although he looked to have a promising career on the court, Nichols seemingly failed to measure up to off-court expectations.

However, some Cavalier fans could not help but hope for a Nichols comeback as the team struggled without the much-needed big man on the court. The Wahoos’ experienced several close losses and Bennett was forced to switch up his playbook, often resorting to four-guard lineups and making many fans wonder if Nichols could have made the difference this season.

Yet after the season ended with a Cavs’ loss to Florida on Saturday, Coach Bennett made it clear that Nichols would not have a spot on the roster next year.