More Than A Cancer Survivor

‘I saw the lump on my neck and ran to my computer and literally typed in: ‘lump, neck, ow, dying?”

When you go into a lecture hosted by a cancer survivor you’d expect them to be serious and talk about their condition, concluding with some inspiring life lessons and quotes – but not if your lecturer is named Gabriel Flood.

Gabriel did conclude with inspiring life lessons and advice, but it wasn’t the typical cancer lecture. He was not only lively and animated, but funny. 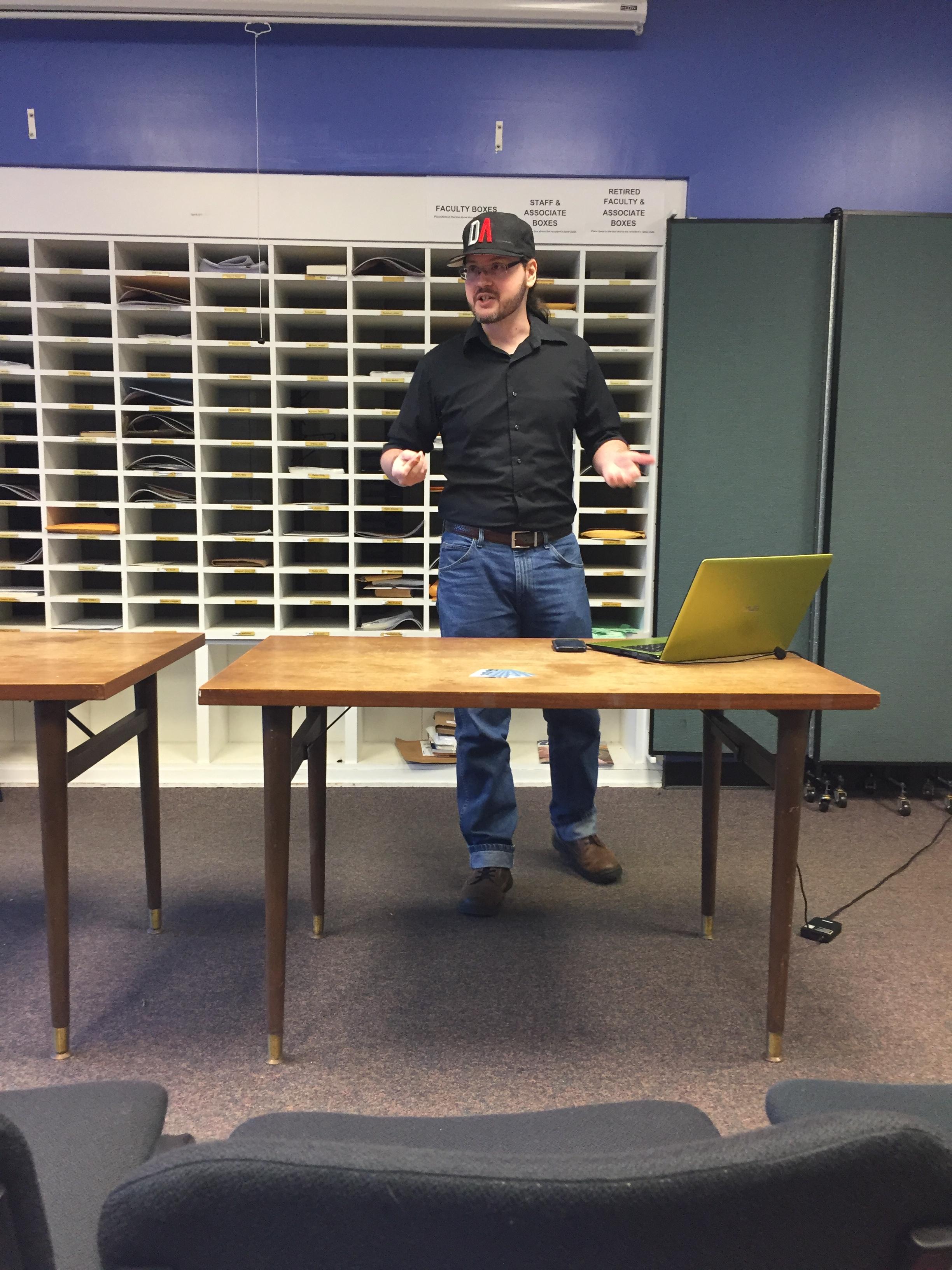 The fact that Gabriel is a cancer survivor is not the only part of his identity. He is also a writer and comedian who has been inspired by what he has been through. A graduate from JMU with a Bachelor’s in English, Gabriel discussed his life after college and addressed an audience which was mainly composed of students.

“I feel a little bad for you guys,” he said, “because you don’t know yet that the world is shit, just feces, just a giant pile of shit, everything that happens to you is a small mushroom grown out of that pile.”

To some he may sound cynical, but to us he was hilarious, and within a few short minutes had us hooked.

After graduating JMU and trying a series of jobs, he ended up working for Rosetta Stone in Harrisonburg. The office life, however, wasn’t for him. He explained he wasn’t comfortable in his environment, that college hadn’t prepared him for it and that when the company got a new boss, 60 people including himself were laid off.

“I don’t blame them because I wasn’t performing,” Gabriel said, “but that put a lot of questions in my head. I thought, ‘now what?’ I did everything I was supposed to do and I still ended up here.”

Months after he lost his job, his savings and settlement were gone. He woke up one morning to brush his teeth, and when he turned his head felt a twinge which made him reach up.

“I felt a lump on my neck, and it wasn’t little,” Gabriel joked. Yes joked, and started to laugh about how this lump couldn’t have simply formed over night and how he could have possibly ever missed it.

“I just thought, ‘shiiiiiiiit.’ You would think I would have been mad or upset but at this point I was deeply depressed and the only thought that occurred was ‘yes, naturally, this is the next step of the course my life was going on.’ So I ran to my computer and typed in ‘lump, neck, ow, dying?'”

Gabriel tried to be reasonable and waited a couple of days to make sure he didn’t just have an infection but the lump got bigger and he developed bruising on his chest where he was able to see the veins through his skin.

At this point Gabriel had no health insurance and no way of paying for a doctor.

Gabriel was diagnosed with Diffuse Large B-Cell Lymphoma and had developed a 14 cm tumor that was cutting off his blood vessels, which explained the bruising on his chest. It had cut off blood circulation to the point that he was in danger of dying within 12 hours if he did not get immediate surgery.

“I had a social worker,” Gabriel said, “who got me the best care with no health insurance and income. She got me indispensable medication that I needed before and after my surgery. I am grateful to her and everything around her that gave her the time and ability to help me.”

Gabriel explained what he was thinking at the time, saying that you get a choice how you react to the thought of your mortality and that either way it changes you. Gabriel learned he could chose how he wanted to handle his own agency.

“I seized agency out of thin air, I reached out in a situation at a time when I should have felt the least powerful and weak and I tweaked that setting…. There’s a lot of reason to start getting down but the first time I had to go in [the cancer center] I was joking around with my nurses because I was nervous. I translated terror into humor which was a defense mechanism. My nurses learned early on that it wasn’t a drain to come and listen to me, and I created a self-sustaining feed back loop. I cracked the cheesiest jokes before I knew that I would feel bad because of the chemo and it helped – they liked me and they would try to help me by cheering me back up, reflecting what I had given out to them earlier. That was my agency, the loop that I created.”

Gabriel started writing that energy in his blog posts and people responded, telling him they never thought it possible but Gabriel made them laugh about cancer.

“When I was getting weaker, I stopped my blog and a lot of people thought, ‘Did he die?’ Ha ha! I felt like a dick but it’s just what happened at that point, I just didn’t feel like writing anymore. Those people started sustaining me, I created the feedback loop. Cancer didn’t give me a lot, but it did give me something I didn’t have before.”

Gabriel’s most recent short story collection, “The Inexorable Journey of Arthur Ridder,” is on sale on Amazon.