Should we still bring him up so frequently?

The past election is something the United States has never before encountered, chiefly due to its controversial candidates and the language that surrounded both their campaigns.

It’s no secret that racial minorities, women and members of the LGBT community have particularly strong feelings about Donald Trump’s campaign. Also, maps that show the votes across the country show people in the age range of 19-24 mostly voted for Clinton. Considering college students make up a large portion of this demographic, it’s no surprise on the Wednesday after the election the University was completely melancholy. Regardless of who you voted for, the stakes were high.

In response to the testy political environment, President Sullivan wrote an email to the student body about the importance of continued public discourse in the realm of politics as well as other matters. This was all good and well, until she quoted the University’s founder Thomas Jefferson. 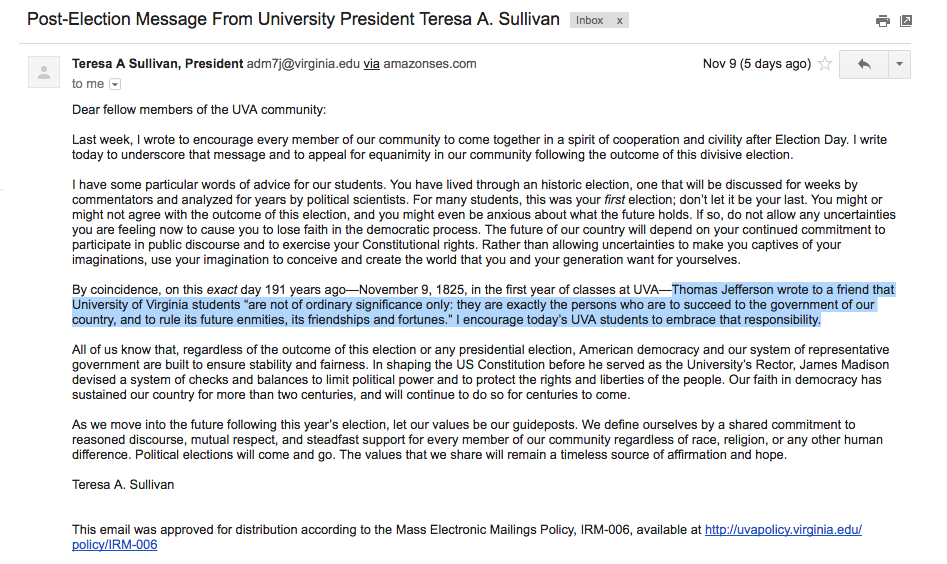 The email sent out the day after the election

Personally, I was not offended. However, while reading the email I did have a “wait a minute” moment when I came across the quote. What came to mind was how inappropriate of a time it was to quote Jefferson of all people on this particular topic. I also thought that I couldn’t be the only who felt this way – and I wasn’t.

“I didn’t like it at all,” said a student who wished to remain anonymous.

“Using a historical figure who is known to have a history with slaves to put people of color at ease, especially during this time when someone who is blatantly racist was just elected President is completely uncalled for,” the student continued. “I understand that she probably wasn’t thinking about that, she’s white she doesn’t have to, but that’s something that many people, including myself, did not tolerate. I signed the letter that was sent to her saying how many people didn’t agree with it.”

Third Year Domenic Crump felt the same way. “Thomas Jefferson is someone who is unique to UVA, but in modern times, and with the polarity of our country right now, I think we need to stop inserting him whenever we can into discourse about our school’s values and our community.”

Crump said, “As an African American student, I was appalled that she quoted him in the letter considering the nature of the speech of the President-elect. I think the fetishization of Thomas Jefferson that UVA promotes has become increasingly inappropriate as we try to progress and move towards a more egalitarian society.”

In the protest that took place this past Friday on the Rotunda steps, students also mentioned they felt sending emails out about recent issues and incidents was an ineffective University method of dealing with student reactions.

There is a time and a place for everything. President Sullivan’s email wasn’t bad, but in light of her audience, quoting this historic figure who is particularly controversial because of his history with African Americans was inconsiderate. Just because Jefferson is the founder of the University doesn’t mean he has to be quoted and incorporated in everything we discuss— it gets redundant.

On Monday, President Sullivan said that she supports students’ rights to their own opinions and that quoting Jefferson doesn’t imply she agrees with all of his actions, beliefs or politics. She said:

“In my message last week, I agreed with Mr. Jefferson’s words expressing the idea that U.Va. students would help to lead our republic, today’s leaders are women and men, members of all racial and ethnic groups, members of the LGBTQ community, and adherents of all religious traditions,” Sullivan explained. “All of them belong at today’s U.Va., whose founder’s most influential and most quoted words were ‘all men are created equal.'”