‘I have an obligation to change perspectives on the undocumented community’

The Tab had the opportunity to speak with Mayte Lara, an undocumented Class of 2020 student, to learn more about her background, journey to UT and thoughts on the implications of the 2016 election.

Tell us your immigration story

I was born in Guanajuato, Mexico but when I was 3 years old, my parents packed their bags and decided to move to the United States in search of the “American Dream.”

We initially lived with my grandma and uncle who were already living in the country until my parents found stable jobs. We slept on the floor for a couple months until my mom found a job as a hotel maid and my father as a construction worker. We then moved to our own two-bedroom apartment where I’d share a room with my sister for 15 years.

How was life growing up undocumented?

I quickly assimilated to the American culture, and even though I knew I was from Mexico, I didn’t think it was a big deal — I thought everyone was accepted regardless of their background. 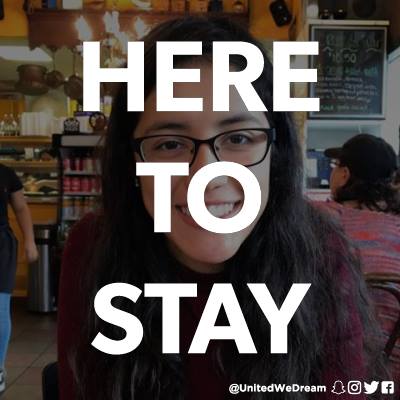 As I grew up, I started to open my eyes and see reality for what it truly was for us. I would notice my dad come home from work late at night with dirty clothes and tired eyes. Since he worked in construction he was constantly out in the sun, so soon enough he didn’t resemble his true skin color. I remember seeing my mom rush to pick me up from after school daycare, even when her whole day consisted of cleaning rooms of the very people who disliked people like her. And as I grew up, I constantly noticed these forms of adversity.

Still, I went on with my life thinking nothing would ever cause me trouble even though I was undocumented. I worked hard in school so when I came out of middle school at the top of my class, I was sure my high school career would be the same and I would have my life set.

However, that did not happen. I worked extremely hard in high school and became a leader throughout my community. I was the class president, NHS president, AYC District 5 Rep and much more. Everything was going great until I began the college application process.

What was the college application process like for you?

Applying to college and finding scholarships that I was eligible for was the most stressful part of my high school career. Although my counselors did help, most of the work came from my own research and work. My parents didn’t attend high school in Mexico, let alone college, so I had no one to truly help me. Fortunately, because I came out of my high school ranked as the Valedictorian, the college application was eased a bit. However, financial aid was the biggest concern.

As an undocumented student, I can’t apply to big name scholarships like the Gates or Dell one, and I can’t find any at the local level sometimes. Financial aid was tough, but fortunately things fell right into place.

I originally wanted to go to Harvard but was waitlisted so I picked UT and was ready to start my journey on the 40 acres. But something happened the day of my graduation that ultimately opened my eyes to the harsh reality that I lived in.

I tweeted about my success in high school, along with the fact that I was undocumented, and it went viral! I had many congratulations, but just as many Trump supporters harassing me. 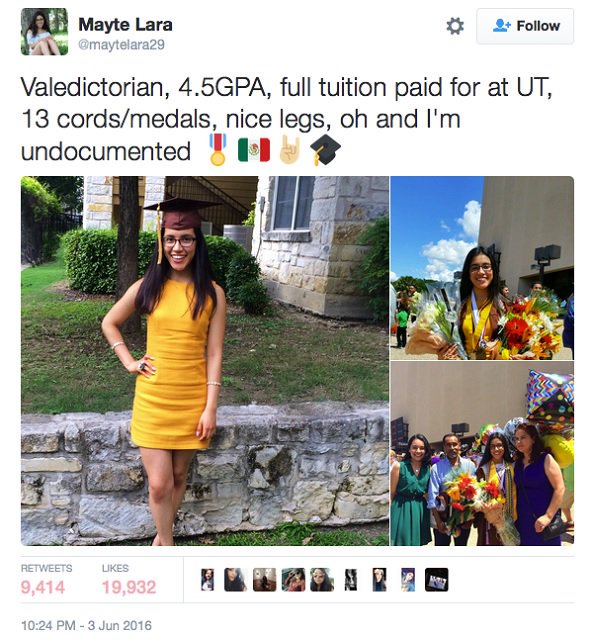 I was told “get out,” “go back,” “you don’t deserve this,” “stupid illegal,” and much worse. I couldn’t believe it. An innocent tweet intended only to motivate my followers and show them that they could do anything regardless of their background was quickly attacked. At first I didn’t know what to do and I was worried about what could happen. However, after talking to some organizations and mentors, I realized the importance of sharing my story.

What are the most common stereotypes you’ve been faced with?

The most common stereotypes are that undocumented people don’t pay taxes, or that we’re not smart. Both of these are so untrue — we are smart and we do pay taxes.

How has your story affected your time at UT?

As a UT student, I have an obligation to change my peers’ perspectives on the undocumented community. Just walking around campus is a privilege in my eyes, and with that privilege I must do my duty to inform those around me about the reality of being undocumented and the obstacles that come with it. Being an undocumented Longhorn is much more than just being undocumented. We pay taxes, we are not criminals, we are not rapists and we are not lazy. Undocumented people have just as much right to fair treatment as any other human being, and it’s time people realize this.

Most undocumented people come to this country in search of a better life only to be stepped on and mistreated.

How do you feel about the election results?

I’m disappointed in the results.

As much as these results break my heart — and those of my community — I can only hope that we don’t lose hope and motivation. My community has endured so much adversity including low-paying jobs, discrimination and much more.

We came to this “great” country in search for a better life only to be stepped on by everyone. We can’t lose motivation. We must get to work.