Charlie Strong is in the hot seat, and it’s just business as usual

He should probably still stay

Coming into last weekend’s game against Iowa State, many fans already started calling for Coach Strong to be fired. But even after the 27-6 win, the chatter will continue to grow.

Perrin said, “I support Charlie Strong. He’s my coach. He’s a friend. I respect him as a man,” in a meeting with reporters in Dallas right before the game.

It time to put the program back on the national stage. #stronghornnation #texasfootball

Perrin is simply looking for an improvement in the program, not a specific number of wins. If this is the case, Strong looks to be right back at the 40 acres next season.

With this generation dwelled up in social media, this statement by the Texas AD means little to nothing to fans. A lot of information can be misinterpreted and thrown into the mix with the facts.

There is a possibility that Texas is currently targeting University of Houston’s coach Tom Herman but Herman quickly shot that rumor down. But you never know when money is involved.

Time to open up a new chapter for our storied program. #stronghornnation #texasfootball

At only 30 games into the Strong Era at University of Texas, it’s not fair to evaluate his performance in the rebuilding era of a prestigious program. But in the Big 12 and especially College Football, life isn’t fair. It’s simply business.

Even as Coach Strong took over as Texas’ main defensive play caller, Texas allowed 672 yards to Oklahoma. The defense looked to be bystanders to an offensive clinic as little defensive success occurred.

Strong has built his career on defense and if his main expertise is failing him, he truly deserves to be finished here at the University of Texas as a head coach barring a miraculous defensive turnaround.

I truly believe that Charlie Strong should stay in Texas for at least one more season. Last season, Texas ranked at the top of NCAA football in defense even though over offense struggled. That is why I believe this season it’s more of a fluke, a mental regress in the defense because Texas has tons of potential. 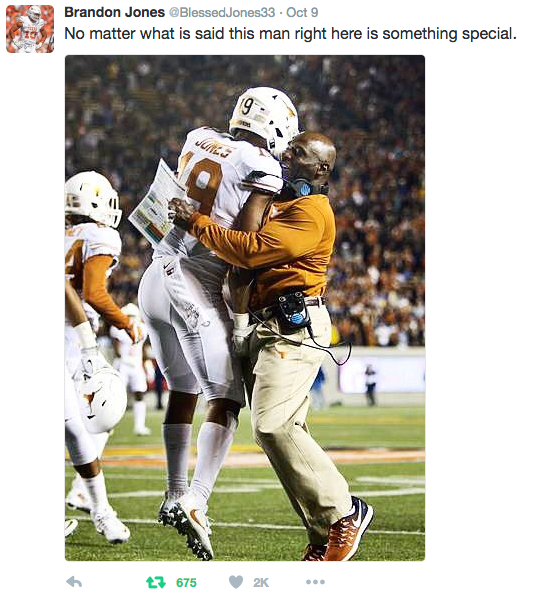 Strong has to change the mindset of the Longhorn defense and give confidence to the players for them to be able to to go out there each Saturday and perform for their coach.

Another reason I believe Strong should stay is the countless amount of praise he has received from his players and recruits for next season. They want him at the forty acres and that says a lot about a head coach’s character and will.

Some football players such as Brandon Jones have spoken about the ongoing rumors through tweets supporting the 3rd year Texas coach.

While it sure looks likes Texas players love playing for Charlie Strong and the defensive woes are outshining the Texas offense rebirth. But they are not the ones that are going to be the judge of their coach’s future. They have to step up on the football field and fight for their coach this week against Kansas State.

Only the upcoming weeks will determine Charlie Strong’s fate in Texas but as of right now, his future is up in the air.