Everyone should go to Coachella at least once in their lifetime

The food, the clothing, the Instas – oh my!

For the past two weeks the population in Indio, California has drastically increased as festival goers packed their flower crowns and heart-shaped sunglasses and trekked out to the desert for the annual and infamous Coachella.

Unless you physically live under a rock, the chances are that you have heard the hype about the music festival. But what makes Coachella stand out from the other festivals that get just as many big-named performers, I kept asking myself. I just had to see what all the buzz was about, so I also packed my flower crowns and heart-shaped sunglasses and flew to California to see what was the big deal.

And I am certainly glad that I did because I finally realized that Coachella stands out on its own as a music festival for numerous reasons. 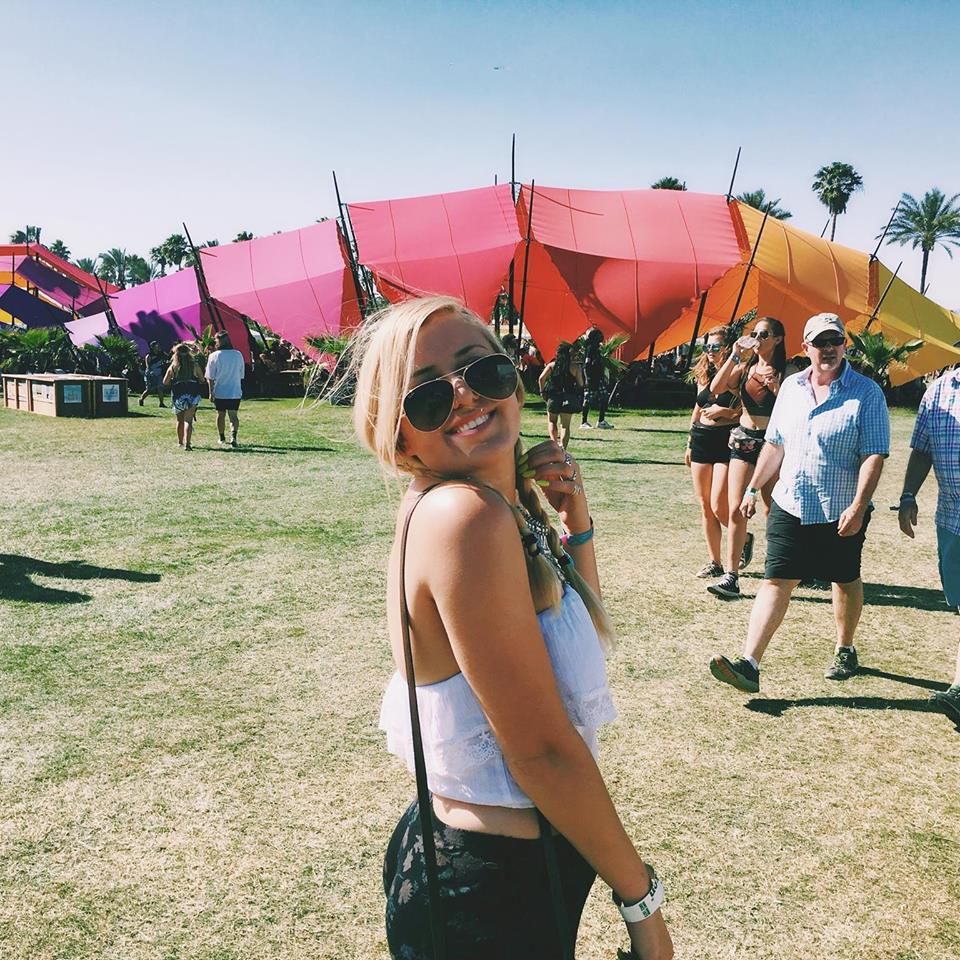 Not only is California known as the sunshine state, it is one of the most sought out places in the United States to go to relax. Residing only slightly over two hours outside of Los Angeles, Indio, California is the perfect place to host a music festival. Right next to Palm Desert at the Empire Polo Club, there is nothing but huge fields of grass that are perfectly green and open for a festival. Unlike many festivals that have grass that gets ripped up and ruined, making it into a complete muddy mess, the conditions of the dry country club grass are kept perfectly in tact so the festival goers are free to roam around without worrying about anything else but the music.

Plus, with a location that is sunny 99 precent of the year, every single Coachella festival is nothing but sunshine and smiles for the entire weekend. 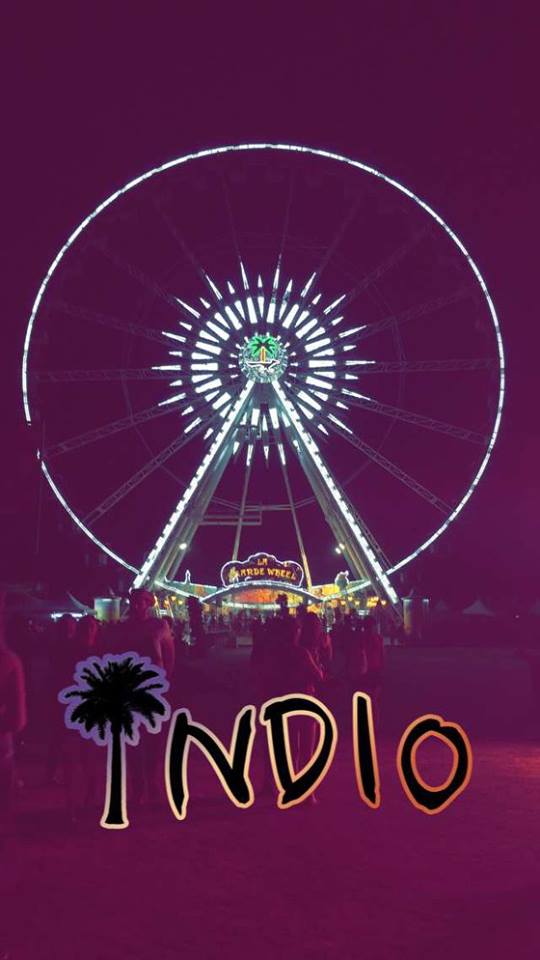 A huge problem with many festivals is the inconvenience it takes to actually arrive to the festival. There are typically hours of traffic, hundreds of dollars for an Uber, and virtually no parking. Coachella seems to be the only festival that is on top of their game. Because Indio is surrounded by multiple vacation spots, there are hotels virtually everywhere. Near each cluster of hotels is a shuttle stop. For $70 for the entire weekend, you can take the shuttle from wherever you are (spanning all the way to Palm Springs) that comes every ten minutes to bring you to the festival.

I never waited in line, I never worried I wouldn’t be able to make a shuttle, I never worried I was going to get on the wrong shuttle. Everyone was clearly marked and organized and there were workers at every check point to make sure you knew where you were going. The shuttles took out so much stress of going to a festival and also provided guaranteed free rides for those who were under the influence. 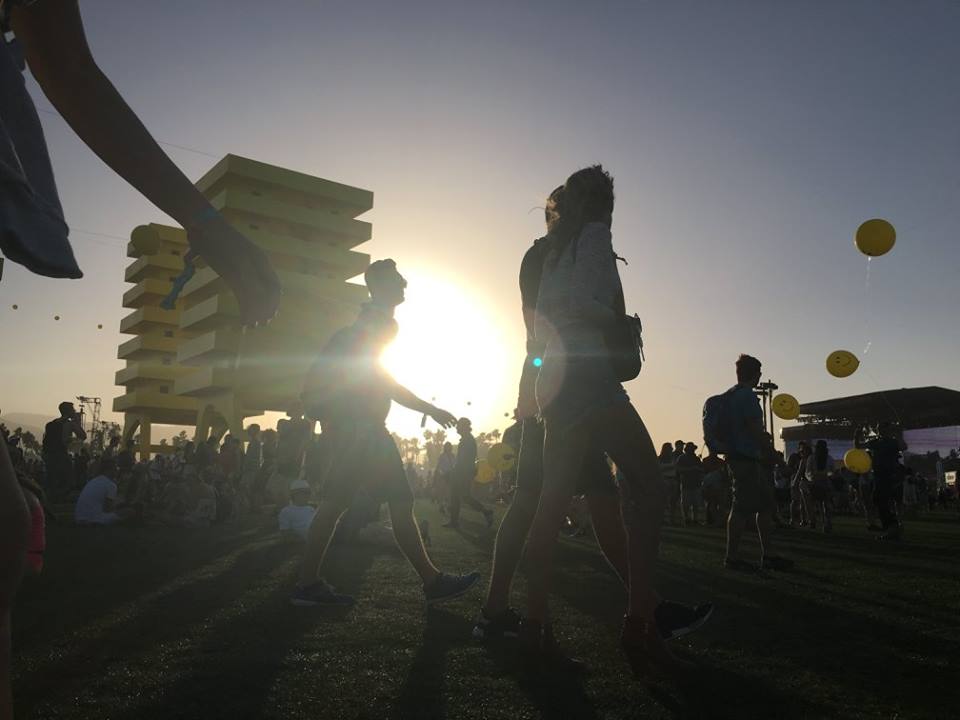 Though it has become such a spectacle over the years, it is true that every day of Coachella is a fashion show. People pulled out all the stops, wearing the latest trends and taking fashion risks that are welcomed within the festival environment. The most amazing thing about the fashion at Coachella is that everything is acceptable and there is no room for judgment. Festivals are no longer the place for plain t-shirts and comfortable shoes, it is a place for high fashion. It’s also no secret that Coachella is a widely publicized event on social media, so it’s important to look your best and make a statement with your fashion that will leave everyone in shock and awe, only to get better as the years go on. 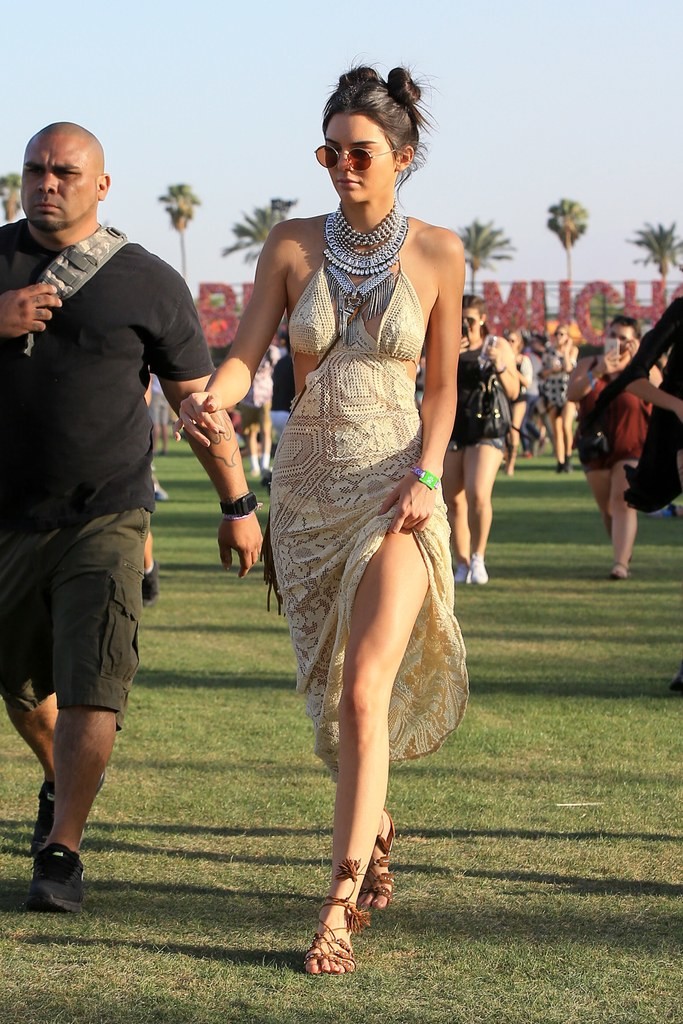 I always knew festival food was some of the best ever, but wow did Coachella outdo themselves this year. With multiple food stations set up and dozens of different kinds of food at each station, the hardest decision I had to make all week was what was I going to eat and how much was too much.

From garlic fries, to watermelon slices, to corn on the cob, to pad thai, to s’mores, to frozen yogurt, to gyros, to burger, to just about anything imaginable. Not only was there so many option but the food was absolutely delicious. They pulled out all the stops to get the best of the best. Even if you’re not that into the festival scene or one of those weird people that doesn’t like music, you should at least go for the food because it will change your world. 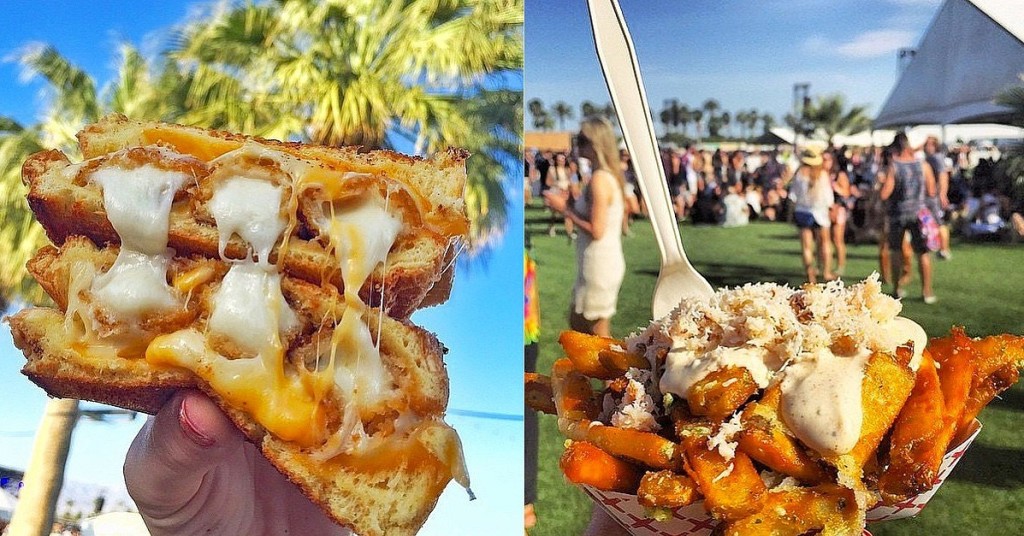 Coachella is smart when choosing the sculptures or displays that they choose (the biggest and most recognizable is the Ferris wheel at the entrance to the festival), because they choose things that are visually representative of the entire festival. It is built in marketing for them as people stand in front of whatever the display is, people can easily identify that that person was in fact as Coachella. This year the big structure was the “Besame Mucho” display made completely of flowers, the huge building-sized yellow chairs, and the rainbow arches that were covers for picnic tables. All unique, all recognizable, and all Instagram worthy. 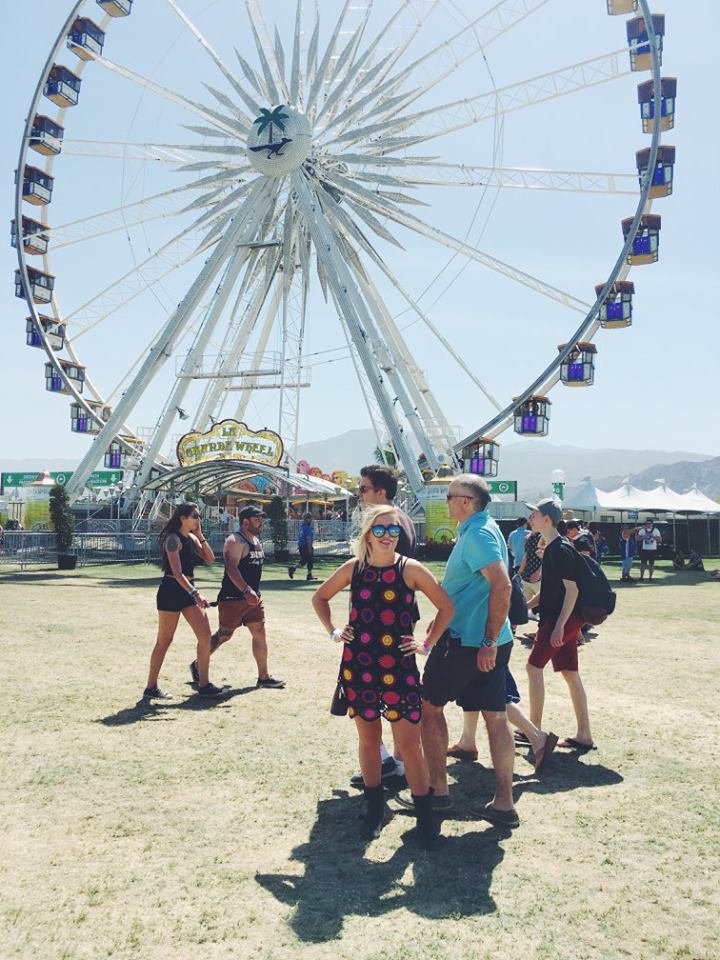 No matter what type of music you may be into, there was a performer that could lure you into the Coachella grounds. All ages and backgrounds gathered together to listen to their favorite artists. Coachella consistently brings in big name performers and seems to outdo themselves every year proceeding that. 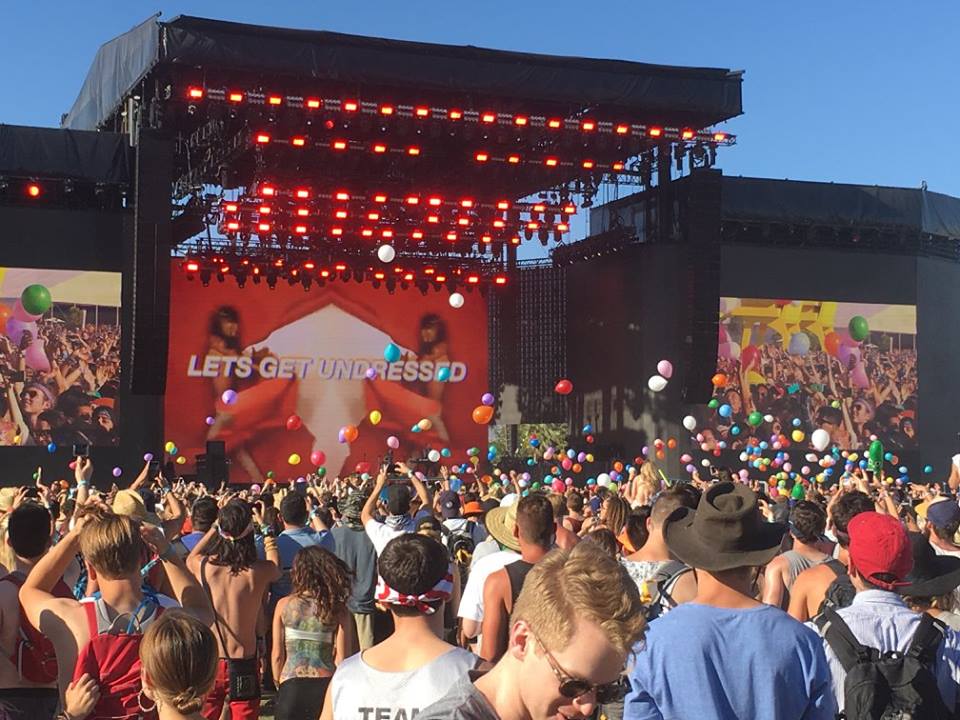 On top of the regularly scheduled performances, even bigger and more badass performers are frequently brought out on the stages of Coachella. Being one of the biggest events of the festival season while also residing only a car ride away from Los Angeles, there is no excuse for mass amounts of celebrities to be in attendance and they never cease to amaze the audience.

I went to the festival the first weekend and witnessed Disclosure bring out Lorde and Sam Smith, Calvin Harris bring out Rihanna, Sia bring out Kristen Wiig, Paul Dano and Maddie Ziegler, Run the Jewels bring out Bernie Sanders, among many others. It is always a surprise and the reveal is also elaborate, adding to the experience. 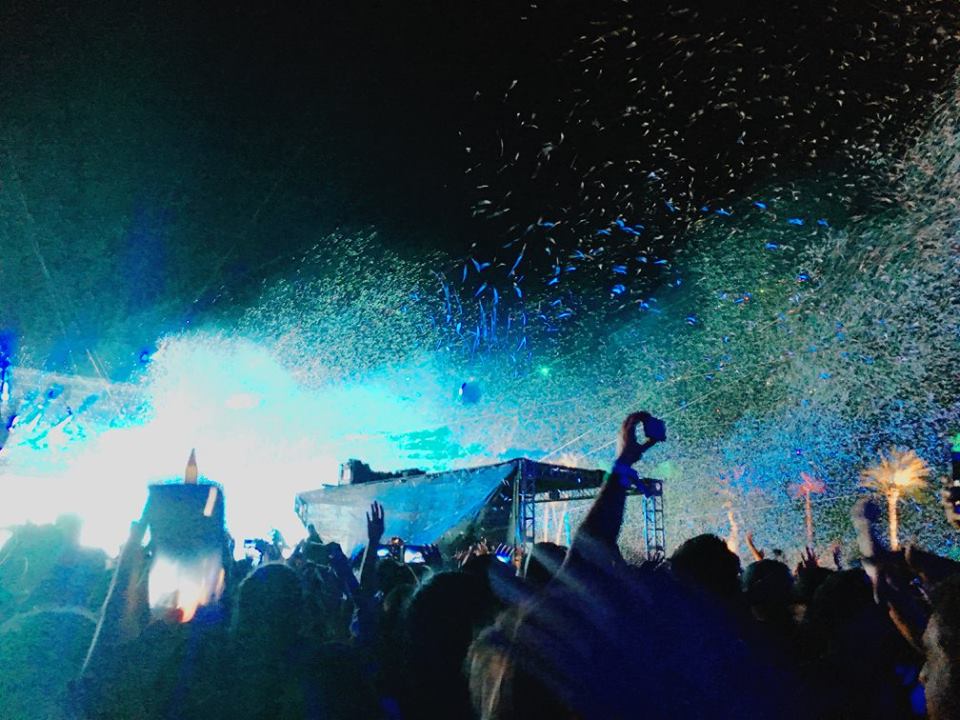 It should not be surprising to anyone that the majority of the celebrities at Coachella are not the performers but the A-list stars that are there just to enjoy the festival. They are always dressed to impress, always with a posse, and always the first ones to brag about how amazing Coachella was.

From Kylie and Kendall Jenner, Taylor Swift, the Weeknd, Gigi Hadid, Joe Jonas, Orlando Bloom, Katy Perry, Alessandra Ambrosio, Nina Dobrev, Brooklyn Beckham, Paris Hilton, Louis Tomlinson, Leonardo DiCaprio, the queen of Coachella Vanessa Hudgens and so many others, it is almost impossible not to run into one of your favorite stars while you are there. Be on the look out and you could just have the best day of your life if everything else that happens in your weekend at Coachella isn’t enough already. 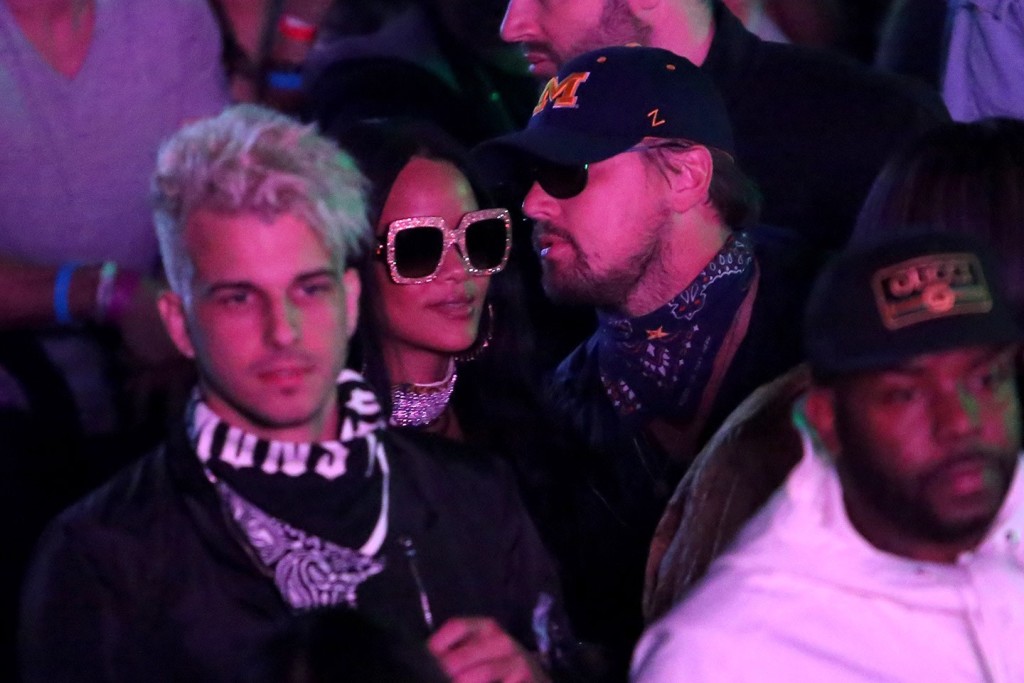 The moral of the story? It may be expensive and it may be far from where you live, but you will never regret or forget your first time at Coachella ever. It is the festival of festivals.