We all know the Daily Trojan, but up until eight years ago, there was another student newspaper known as The Row Run. The Row Run was a student-run newspaper that consisted of an all Greek Life affiliated staff.

Well, if you're ever bored going through the Doheny book stacks, you may stumble across this very fun article that The Row Run published in 1981. 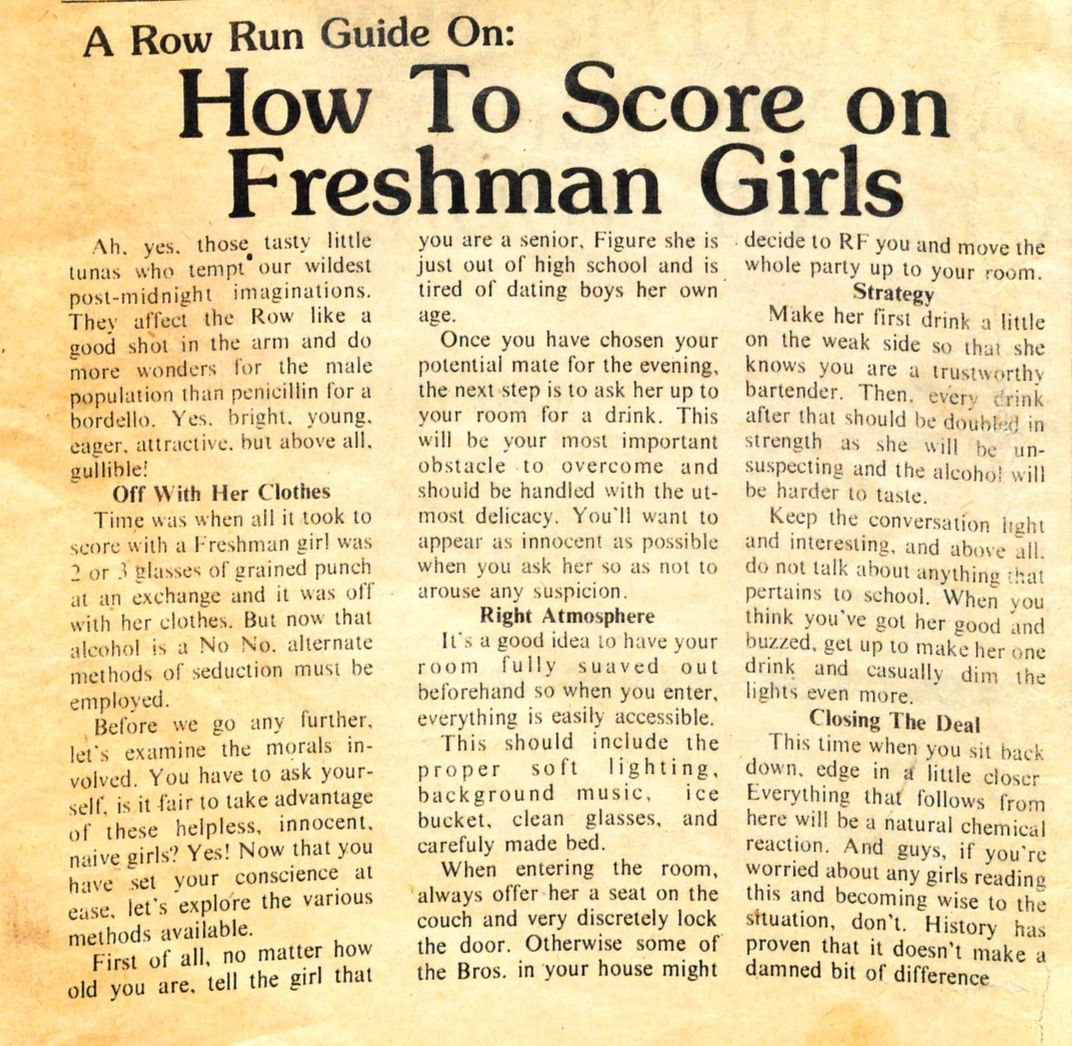 This article was published in The Row Run's 1981 Christmas addition

To summarize, the article essentially step by step lays out suggestions on how to seduce freshman girls. Said suggestions involve boys lying to girls about their age, secretly force feeding her alcohol, preying on freshmen naivety and innocence, and of course, creating a false persona.

A few things with this. Let's start with the fact that the article literally begins by describing freshmen girls as "tasty little tunas." Excuse me? I do not know whether to laugh, cry, or throw up. The introduction then concludes by celebrating how gullible freshmen girls are. Yep, freshmen girls, you're all just a bunch of trusting, unintelligent bodies for boys to prey on.

The article then goes on to devote an entire section boldly entitled "Off With Her Clothes". So, this is getting progressively more rape-y. But don't worry! The "Off With Her Clothes" section does ask the readers to evaluate their morals! …But then the author goes on to clarify that it is in fact morally OK to take advantage of young, "helpless" girls – it's actually encouraged. Great.

Here's where the article really gets good. It goes into detail on exactly how to get a girl in your room. First, lie about your age to seem mature and offer her a drink in your room. Then, while she's not paying attention, lock the door.

Woah, woah, woah. Let's just take a quick pause. Lock the door without her knowing? Is that not holding someone against their will? Is that not, I don't know, ILLEGAL?!

But it only gets worse! The article explains the exact method of tricking young girls with low alcohol tolerances by getting them drunk without them knowing! It advises to make a weak drink so said freshman girl gains the trust of said frat boy and to slowly make it stronger unbeknownst to the girl!

Ladies and gentlemen, we're going to have a quick conversation about consent. Consent means that both partners agree to engage in sexual acts. Legally speaking, if one's judgement is impaired by drugs and/or alcohol, they are not able to give consent. Therefore, this article is giving step by step instructions on how to take advantage of and how to sexually assault a girl.

So, what happened to The Row Run? Well, the last we could find of them was a Twitter account that last tweeted in 2010.

I don't know what the scariest part of this whole ordeal is – that guys talked like this less than 40 years ago or that USC allowed this newspaper to continue to exist up until 8 years ago. Additionally, their nonexistence, from what we can tell, has little to nothing to do with this heinous article.

My favorite part of the article has to be the last line. The article reassures guys not to worry if girls begin to catch onto this or read the article because "history has proven" that girls will continue to fall for dreamy frat boys who play their cards right.

Well, guess what, boys? Time is up. This article is disgusting. Whoever wrote this or helped publish it is a miserable excuse of a man and probably one who never had any success with girls. Women have come a damn long way since 1981 and none of us are falling for this pathetic, little act anymore! Sorry, boys.

Shame on USC for allowing such an organization to exist and such an article to be published. Jokes on you, USC, for not checking your Doheny book stacks better!

Ladies, remember, to be safe out there. Don't let someone lock you into a room or secretly give you an unhealthy amount of alcohol!!!!!