Carry on, Ainsley, but this wasn’t the way to handle it

After years of speculation, the administration formally announced that deferred recruitment will take effect next semester, which will negatively impact the Greek community in the short term.

According to Ainsley Carry, the Vice President of Student Affairs, "deferred recruitment" means that students will have to complete at least 12 units at USC before being eligible to rush a fraternity or a sorority. Thus, students will have to wait before they can get involved with Greek life until they have a USC GPA.

So, how will this effect the largest social community on campus?

During their first semester, many students find the majority of their friends through Greek life and take comfort in the familial relationships that sororities and fraternities provide. Deferring rush will deprive newly enrolled students of finding a community within a large institution where it is often difficult to make friends during the first few months.

Currently, sororities only have one formal rush process in the fall semester. It is rumored that to adjust to the deferred recruitment policy, the Panhellenic Council will motion to move formal recruitment to the spring semester. If this holds true, springs admits will have to wait a whole year to join a sorority.

The university already does little to support spring admits' transition into social life, and they now might exclude those enrolled in the spring from yet another opportunity to make friends and find a sense of community on-campus.

Like being a spring admit sucked ass, this is my first Fall semester at USC and it's about to be LIT.

Sororities will face significantly smaller numbers in the fall

Freshmen make up about 50% of sorority pledge classes in the fall, rounding out to about 35 women per house. Since freshmen enrolling in the fall semester will not be able to rush until the spring semester, the 11 sororities will face a drop of 385 members in total during the fall. They cannot make up for several hundred lost members until January if they change to formal spring rush. If formal rush is not postponed a semester, sororities could struggle with the deficit for an entire school year.

The financial impact of deferred recruitment would be detrimental to Greek life organizations for years to come. In addition to not being able to recruit newly enrolled students, sororities also lose 50 seniors every year after graduation, and they would be unable to replace them for an entire semester. Thus, individual sororities have the potential to be down about 85 members in the fall. With dues around $1,500 a semester, each sorority is estimated to lose $130,000 this coming fall semester alone.

Fraternities will suffer financially as well, but they will not lose nearly as much as sororities since they have recruitment in both the fall and the spring.

The Panhellenic and Interfraternity councils brought up these financial issues to Carry, who said that the administration would pay the difference. He did not specify where the hundreds of thousands of dollars would come from.

The administration met with both the Panhellenic and Interfraternity councils two years ago and decided to delay making a decision on formal spring recruitment for another five years in order to collaborate in solving some problems with the rush process. So how did the administration decide on deferred recruitment now, with 3 years remaining to work out the issues? They found a loophole by creating the requirement to have a USC GPA, rather than making it about spring recruitment.

Both councils issued letters to the administration urging the university to take their leadership and expertise about the Greek community into account, but they accused the administration of not listening to their concerns. When the university stepped in and decided to implement deferred recruitment against the Greek community's wishes, the animosity between the institutions thickened. 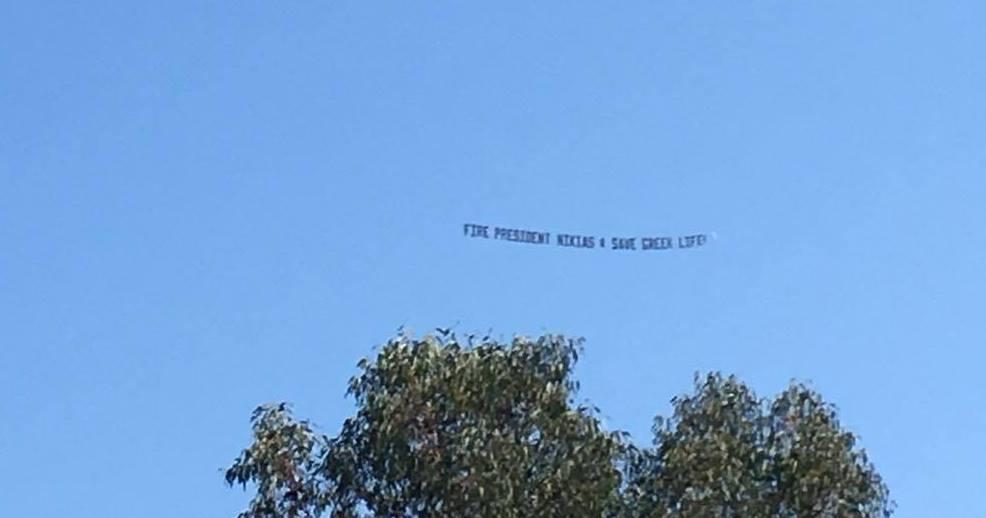 The issues surrounding deferred recruitment has caused quite the controversy across campus, as seen on parent's weekend when a plane flew over campus with the words "Fire Nikias & Save Greek Life." The banner and plane were rumored to have been paid for by alumni. If this is the case, Nikias better tread lightly, considering some of the wealthiest USC alumni (an avid donors) were involved in Greek life.